The Rise and Fall of the Secret Service

NEW YORK TIMES BESTSELLER • “This is one of those books that will go down as the seminal work—the determinative work—in this field. . . . Terrifying.”—Rachel Maddow

The first definitive account of the rise and fall of the Secret Service, from the Kennedy assassination to the alarming mismanagement of the Obama and Trump years, right up to the insurrection at the Capitol on January 6—by the Pulitzer Prize winner and #1 New York Times bestselling co-author of A Very Stable Genius and I Alone Can Fix It

Carol Leonnig has been reporting on the Secret Service for The Washington Post for most of the last decade, bringing to light the secrets, scandals, and shortcomings that plague the agency today—from a toxic work culture to dangerously outdated equipment to the deep resentment within the ranks at key agency leaders, who put protecting the agency’s once-hallowed image before fixing its flaws. But the Secret Service wasn’t always so troubled.

The Secret Service was born in 1865, in the wake of the assassination of Abraham Lincoln, but its story begins in earnest in 1963, with the death of John F. Kennedy. Shocked into reform by its failure to protect the president on that fateful day in Dallas, this once-sleepy agency was radically transformed into an elite, highly trained unit that would redeem itself several times, most famously in 1981 by thwarting an assassination attempt against Ronald Reagan. But this reputation for courage and excellence would not last forever. By Barack Obama’s presidency, the once-proud Secret Service was running on fumes and beset by mistakes and alarming lapses in judgment: break-ins at the White House, an armed gunman firing into the windows of the residence while confused agents stood by, and a massive prostitution scandal among agents in Cartagena, to name just a few. With Donald Trump’s arrival, a series of promised reforms were cast aside, as a president disdainful of public service instead abused the Secret Service to rack up political and personal gains.

To explore these problems in the ranks, Leonnig interviewed dozens of current and former agents, government officials, and whistleblowers who put their jobs on the line to speak out about a hobbled agency that’s in desperate need of reform. “I will be forever grateful to them for risking their careers,” she writes, “not because they wanted to share tantalizing gossip about presidents and their families, but because they know that the Service is broken and needs fixing. By telling their story, they hope to revive the Service they love.”

An excerpt from Zero Fail


On the evening of March 30, 1981, an eight-year-old boy in Norfolk, Virginia, sat glued to his family’s living room TV. Earlier that day, John Hinckley, Jr., had attempted to assassinate Ronald Reagan outside the Washington Hilton. But as CBS News played the scene in a slow-motion loop, the boy’s focus wasn’t on the president. It was on the man who entered the frame.

Over and over again, the boy watched in amazement as this square-jawed man in a light gray suit turned toward the gunfire and fell to the ground, clutching his stomach. By taking a bullet for the president, the newsman said, Tim McCarthy probably saved his life. At that moment, young Brad Gable (not his real name) knew exactly what he wanted to do when he grew up:

He would be a Secret Service agent.

Now, thirty years later, Gable had indeed fulfilled that mission. He was a member of the Secret Service’s Counter Assault Team, or CAT. In the constellation of presidential protection, CAT arguably has the most dangerous assignment. When most people think of the Secret Service, they picture the suited agents who cover and evacuate the president in moments of danger. The heavily armed CAT force has a different mission: Run toward whatever gunfire or explosion threatens the president and neutralize it. The team’s credo reflects the only two fates they believe await any attacker who crosses them: “Dead or Arrested.”

Gable was proud of the career he had chosen. Among his colleagues, he was respected for the pure patriotism driving him and for his intense focus on operational details. So why, in the late summer of 2012, as he sat in a restaurant near Fort Bragg, North Carolina, did he suddenly feel like throwing up?

Gable and his fellow agents had come to a mom-and-pop restaurant with a group of Delta Force members who were overseeing the CAT team’s annual training. Gable’s squad had drilled for almost a week with these steely Special Forces operators, playing out mock assassination attempts and blind attacks to learn how to shield themselves and their buddies in close-quarters combat.

After a dinner of ribs, steaks, and wings, Gable sat back for some beers and small talk with one of 9/11’s faceless heroes, a Delta Force sergeant major I’ll call John. Gable liked John’s no-bullshit style. He had real battlefield experience—two weeks after the 9/11 attacks, he’d been part of the raid on Mullah Omar’s Kandahar compound, but he didn’t crow about it—which instantly earned Gable’s trust and respect.

On his second beer, Gable felt loose enough to ask John a question that had been on his mind: “After teaching so many operators and law enforcement agents, what do you think of the Secret Service’s overall readiness?” The sergeant major demurred, so Gable pressed him.

“Seriously, how would you rate us?”

“Look,” John said. “I feel sorry for you guys. The Service has really let you down. You’ll never be able to stop a real attack.”

It wasn’t the answer Gable had hoped for, and as he listened to John dissect the Service’s outdated equipment and spotty training, his stomach grew queasy. Deep down, he knew how ill-equipped and out of date the Secret Service was, but hearing it articulated by someone he respected made it impossible to deny. His mind drifted to all the times he had seen the Service drop the ball—most recently, a 2010 trip to Mumbai with President Obama, in which his unit had narrowly avoided a major international incident after nearly killing an unidentified gunman who turned out to be a local police officer. Scenarios like these were dress rehearsals for a real attack on the president, and in his five years with CAT, he had seen the Service fail so many of them.

Gable was now faced with a brutal truth: Increasingly, the Secret Service was fulfilling its Zero Fail mission based not on its skills, people, training, or technology, but on dumb luck. How long would it be before that luck ran out? Gable wasn’t alone. He knew other dedicated agents who felt a growing sense of disillusionment, especially with the agency’s leadership. But fear of repercussions had kept them silent. Until the stakes got too high.

Carol Leonnig is a national investigative reporter at The Washington Post, where she has worked since 2000, covering Donald Trump’s presidency and previous administrations. She won the 2015 Pulitzer Prize for her reporting on security failures and misconduct inside the Secret Service. She also was part of the Post teams awarded Pulitzers in 2018, for reporting on Russia’s interference in the 2016 presidential election, and in 2014, for revealing the U.S. government’s secret, broad surveillance of Americans. Leonnig is an on-air contributor to NBC News and MSNBC, the coauthor of A Very Stable Genius: Donald J. Trump's Testing of America, and the author of Zero Fail: The Rise and Fall of the Secret Service.

The Rise and Fall of the Secret Service 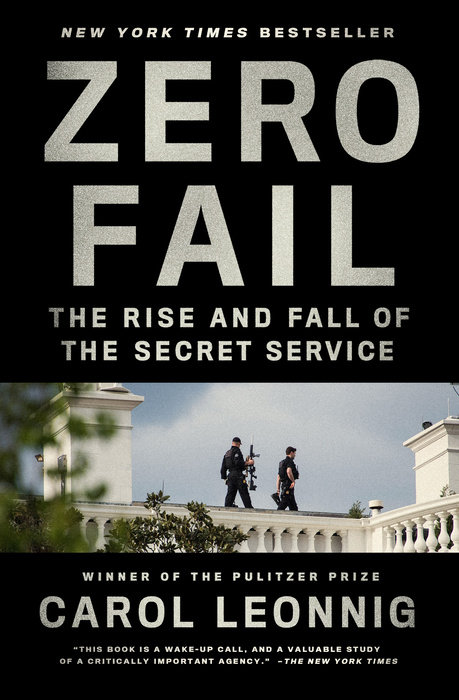