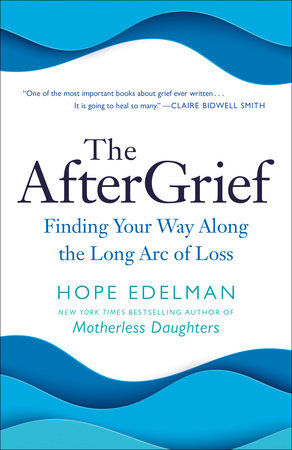 A validating new approach to the long-term grieving process that explains why we feel “stuck,” why that’s normal, and how shifting our perception of grief can help us grow—from the New York Times bestselling author of Motherless Daughters

“This is perhaps one of the most important books about grief ever written. It finally dispels the myth that we are all supposed to get over the death of a loved one.”—Claire Bidwell Smith, author of Anxiety: The Missing Stage of Grief

Aren’t you over it yet? Anyone who has experienced a major loss in their past knows this question. We’ve spent years fielding versions of it, both explicit and implied, from family, colleagues, acquaintances, and friends. We recognize the subtle cues—the slight eyebrow lift, the soft, startled “Oh! That long ago?”—from those who wonder how an event so far in the past can still occupy so much precious mental and emotional real estate.

Because of the common but false assumption that grief should be time-limited, too many of us believe we’re grieving “wrong” when sadness suddenly resurges sometimes months or even years after a loss. The AfterGrief explains that the death of a loved one isn’t something most of us get over, get past, put down, or move beyond. Grief is not an emotion to pass through on the way to “feeling better.” Instead, grief is in constant motion; it is tidal, easily and often reactivated by memories and sensory events, and is re-triggered as we experience life transitions, anniversaries, and other losses. Whether we want it to or not, grief gets folded into our developing identities, where it informs our thoughts, hopes, expectations, behaviors, and fears, and we inevitably carry it forward into everything that follows.

Drawing on her own encounters with the ripple effects of early loss, as well as on interviews with dozens of researchers, therapists, and regular people who’ve been bereaved, New York Times bestselling author Hope Edelman offers profound advice for reassessing loss and adjusting the stories we tell ourselves about its impact on our identities. With guidance for reframing a story of loss, finding equilibrium within it, and even experiencing renewed growth and purpose in its wake, she demonstrates that though grief is a lifelong process, it doesn’t have to be a lifelong struggle.
Read more
Close

“Hope Edelman is one of the foremothers of the grief revolution. Her work opened the door for honest discussions of grief long before it was considered OK to talk about your inner life. In a world that thinks you should be over your loss already, The Aftergrief normalizes grief—and love—that lasts a lifetime.”—Megan Devine, author of It’s OK That You’re Not OK: Meeting Grief and Loss in a Culture That Doesn't Understand

“This important and empathic work speaks to those of us experiencing the enduring nature of loss who need to feel understood, and have the ongoing adjustments we make throughout our lives because of it legitimized.”—Rebecca Soffer, coauthor of Modern Loss: Candid Conversation About Grief. Beginners Welcome.

"I used to feel shame that I hadn’t ‘gotten over’ my father’s death yet. Reading The Aftergrief reminded me that there’s no such thing as getting over it. I recommend this book to anyone who has experienced grief or loss. Actually, I recommend this book to anyone who is human. And that they read it and pass it on. This book is a balm.”—Jen Pastiloff, author of On Being Human: A Memoir of Waking Up, Living Real, and Listening Hard

“Grief is messy, grief is inconvenient, grief takes time; it is a process. Hope Edelman takes grief up from the underground and brings it into the light, reminding us that it is not only okay to grieve, it is essential.”—Natasha Gregson Wagner, author of More Than Love: An Intimate Portrait of My Mother, Natalie Wood

“Hope Edelman, with her wisdom and kindness, helps us understand the ways loss stays with us through our lifetimes. This book is going to heal so many.”—Claire Bidwell Smith, author of Anxiety: The Missing Stage of Grief

“[Hope Edelman] urges readers to understand that there are no timetables for loss and no firm rules. Death is part of everyone’s life. Community helps us cope, and Edelman’s knowledgeable and thoughtful book offers a gentle, compassionate guide to grieving.”—Booklist
Read more
Close


A medium once told my sister that our mother was living in a corner of her kitchen. Being our mother’s daughters, we took this news in stride. She’d raised us to be open-minded and humble. Who were we to believe we knew better than anyone else? Also, our mother in a kitchen made good sense. Hers had been the nucleus of our childhood home, the place where she’d spent much of her time: standing at the kitchen island, prepping chicken cacciatore in her Crock-Pot, drinking Maxwell House coffee at the speckled Formica table with neighborhood friends, sitting at the corner desk and winding the avocado-green phone cord around and around her index finger as she settled into a leisurely call. With three children and a husband for whom tidiness was forever an abstraction, she was always struggling to keep the space clean. My mother would have loved my sister’s kitchen. Mine surrendered to chronic disorder long ago, but my sister’s kitchen is always shiny and pristine. I’d choose to hang out there, too.

My sister and I live across the country from our family’s burial plots and rarely get to visit the graves. So she placed a framed black-and-white photograph of our mother in the corner of her kitchen between a neat row of mason jars and the countertop range. When I dog-sit for her boxers I give them treats from a jar and we say hello to my mom. I might let her know that her children and grandchildren are doing fine. If I’m facing a big decision, I’ll brush my fingertips across the glass and silently ask her for advice.

I have to imagine how she’d answer. We had only seventeen years together, and I was pretty much tuning her out for the final two. I’ve long since forgotten the sound of her voice and the timbre of her laugh. She died in 1981, and we never made tapes of her talking. In my dreams she speaks in an unfamiliar pitch, her words sometimes garbled, sometimes clear. I haven’t heard her real voice in almost thirty-nine years.

Thirty-nine years. I know. That’s a long time. Says pretty much everyone, ever.

Thirty-nine years and you’re not over it yet?

Anyone with major loss in the past knows this question well. We’ve spent years fielding versions of it, explicit and implied, from parents, siblings, spouses, partners, relatives, colleagues, acquaintances, and friends. We recognize the subtle cues—the slight eyebrow lift, the soft, startled “Oh! That long ago?”—from those who wonder how an event so distant can still occupy such precious mental and emotional real estate. Why certain, specific nodes are still so tender when poked.

How many of us have wondered the same?

You’re still not over it yet? As if the death of a loved one were a hurdle in a track meet that could be cleared and left behind.

I wish there were a foolproof method for “getting over” the death of someone we love. So much, I do. Except everything I’ve experienced, learned, and observed over the past thirty-eight years has taught me otherwise. Since the publication of my first book, Motherless Daughters, in 1994, I’ve collected stories from thousands of women in the United States, Canada, Australia, New Zealand, the United Kingdom, Europe, India, and the Middle East whose mothers died when they were young. I’ve spoken to, emailed, and met with their brothers, husbands, fathers, daughters, and sons. Five file cabinets in my office are filled to capacity with research into how the human body, intellect, and spirit respond to major loss. In nonfiction writing classrooms for the past twenty years, I’ve helped graduate students and aspiring writers identify, question, and articulate their stories of trauma and loss. And for this book, I conducted in-depth interviews with eighty-one men and women who had experienced the deaths of significant loved ones in the past—most of whom were children, adolescents, or young adults at the time, and whose bereavement needs were frequently mismanaged or misunderstood.

Taken together, that adds up to a staggering number of losses. Which is how I can report with assurance that the death of a loved one, especially for someone at a tender age, isn’t something most of us get over, get past, put down, or move beyond. That’s a myth of diminishment. Instead, a major loss gets folded into our developing identities, where it informs our thoughts, hopes, expectations, behaviors, and fears. We carry it forward into all that follows.

“It’s phenomenal, how it never really goes away,” says author and therapist Claire Bidwell Smith. “It changes shape and form all the time and comes back in different ways, even when you think it’s gone. I’m twenty-four years out from the death of my mother and seventeen years from the death of my father and those losses have been with me, in some fashion, every day since they died.”

When psychologist Leeat Granek and author Meghan O’Rourke surveyed nearly eight thousand adults who’d lost a close loved one for Slate magazine in 2011, they observed—in their words—that “the alterations of loss are subtly stitched throughout one’s ongoing life.” Nearly one-third of their survey participants had experienced the death of a close loved one eight or more years earlier. Instead of feeling “over it,” they wanted to keep talking about how grief had shaped their present-day experiences and how it might continue to affect their imagined futures.

“This process is a longer one than most people realize,” explains psychologist Robert Neimeyer, a professor of constructivist psychology at the University of Memphis and the founder of the Portland Institute for Loss and Transition, “unfolding over years rather than months, and involving periodic ‘grief spikes’ years or even decades later.” The Slate survey found the same. One-quarter of the respondents said they’d felt normal only one to two years after the loss. More than one-quarter said they’d never gone back to feeling like themselves afterward.

Nonetheless, when random cross sections of Americans have been asked how long grief should last after a significant loss, their answers range from several days up to a year. The majority of respondents in one study placed the outer limit at two weeks. Two weeks. In some cultures that’s barely enough time to hold a funeral, let alone put emotional pain into any perspective and start making sense of the loss.

A terrible disconnect exists between what the average person thinks grief should look and feel like—typically, a series of progressive, time-limited stages that end in a state of “closure”—and how grief, that artful dodger, actually behaves. This means a whole lot of people getting stuck in the gap between what they’ve been told to expect after someone dies and what they actually encounter when it happens.

Hope Edelman is the author of eight nonfiction books, including the bestsellers Motherless Daughters and Motherless Mothers, and the memoir The Possibility of Everything. Her original essays have appeared in many anthologies, including The Bitch in the House, Behind the Bedroom Door, and Goodbye to All That. Her work has received a New York Times notable book of the year designation and a Pushcart Prize for creative nonfiction. The receipient of the 2020 Community Educator Award from the Assocation for Death Education and Counseling, she is also certified as a Martha Beck Certified Life Coach, and facilitates Motherless Daughter retreats and workshops all over the world. She lives and works in Los Angeles and Iowa City.