NEW YORK TIMES BESTSELLER • A renowned psychic medium teaches us how to recognize and interpret the life-changing messages from loved ones and spirit guides on the Other Side.

“A collection of incredible stories . . . that speak to the universe’s endless capacity for magical moments.”—Goop

Laura Lynne Jackson is a psychic medium and the author of the New York Times bestseller The Light Between Us. She possesses an incredible gift: the ability to communicate with loved ones who have passed, convey messages of love and healing, and impart a greater understanding of our interconnectedness. Though her abilities are exceptional, they are not unique, and that is the message at the core of this book. Understanding “the secret language of the universe” is a gift available to all. As we learn to ask for and recognize signs from the other side, we will start to find meaning where before there was only confusion, and see light in the darkness. We may decide to change paths, push toward love, pursue joy, and engage with life in a whole new way.

In Signs, Jackson is able to bring the mystical into the everyday. She relates stories of people who have experienced uncanny revelations and instances of unexplained synchronicity, as well as others drawn from her own experience. There’s the lost child who appears to his mother as a deer that approaches her unhesitatingly at a highway rest stop; the name written on a dollar bill that lets a terrified wife know that her husband will be okay; the Elvis Presley song that arrives at the exact moment of Jackson’s own father’s passing; and many others. This is a book that is inspiring and practical, deeply comforting and wonderfully motivational, in asking us to see beyond ourselves to a more magnificent universal design.

“This stirring guide . . . asserts that anyone can learn to understand messages that are sent from the ‘Other Side.’ . . . For readers struggling with loss who believe it’s possible to communicate with the deceased, this book will console and empower them to look beyond their suffering.”—Publishers Weekly

“This brilliant book by the renowned psychic medium Laura Lynne Jackson is a guidebook to and translator of the mysterious spiritual language of the universe. Through a series of touching personal stories, Signs teaches us how to discern and understand the myriad spiritual signs in our lives. Laura Lynne’s beautiful and compassionate heart shines through every page. This book is both excellent and important, and I highly recommend it to all.”—Brian L. Weiss, M.D., author of Many Lives, Many Masters

An excerpt from Signs

Have you ever had one of those moments when you’re about to do something important, and you’re way out of your comfort zone, and there’s a lot at stake, and the pressure is on, and of all the positive things you could be thinking, what you’re actually thinking is: What on earth am I doing here?

I’ve lived through those moments. More often than I’d like to admit. Not long after The Light Between Us was published, I was asked to give a speech at a big corporate event in California. I understood immediately that the universe was calling on me to share the Other Side’s message, and I felt completely humbled and honored.

I’d have to get up onstage in front of six hundred of Hollywood’s movers and shakers and tell them something that would move and challenge and inspire them. What’s more, I was sharing the stage with seasoned, powerhouse speakers, including a former U.S. president! I’d never been called upon to deliver a speech like this before. And since the universe had chosen me for this task, I also felt pressure to convey its message powerfully. I didn’t want to let the Other Side down.

Strangely, I didn’t feel terrified. I was nervous, sure, but I was also excited. I wanted to get on that stage. I wanted to honor the message sent to me by the Other Side. And so I went out there and delivered my speech, and only afterward, as I was walking offstage, did it occur to me to wonder: Did I fully honor the Other Side’s message the way I was supposed to? Did I do a good enough job?

I knew the Other Side had steered me onto this path, but still I longed for some kind of affirmation. As I sat backstage, I directed my thoughts to the Other Side and asked for a sign that I had honored their message.

I asked the universe to send me a single orange.

That’s what I asked for—­an orange.

If the universe somehow put an orange in my path, I’d know I was exactly where I needed to be, doing what I needed to do. I’d know that I had delivered their message fully.

After the lecture portion of the event concluded, all the speakers and attendees were ushered outside, into a big open space where lunch was being served. I turned a corner and saw big wooden tables leading into the main dining area. They were there for decorative reasons, to establish a mood, and normally they’d be covered with fresh flowers or plants or some other lovely arrangements.

But not that day.

That day, they were covered with oranges. And not just a few. Thousands and thousands of oranges.

I mean, they were everywhere. Piled up in the entranceway, stacked up next to the serving stations, on every single table. It was dazzling. Of course, one’s rational mind might say, Yeah, but long before you asked for that sign, someone decided to use oranges as a decorative theme.

But that’s not how I received the oranges. To me, the oranges were a beautiful affirmation. My prayer to the Other Side has always been, “Use me however I can best be of service as a vehicle of love and healing in this world. And please just guide me along the way.” And that’s what these thousands of oranges were—­a sign. The universe was telling me, “You’re a member of this team, and you did your part. You honored your role. Thank you.”

When I saw the oranges, I gasped, and then I smiled, and then I started to cry. You see, I asked for one single orange, and the universe sent me thousands of them! That is how loved and supported and cared for we are.

The oranges reinforced four truths for me:

We are all constantly being watched over by a Team of Light;

We are all connected and invested in one another’s journeys;

The oranges, to me, were a startlingly clear exchange—­I asked, and the universe answered. And yet this call-­and-­response isn’t always easy to see. The clutter and doubt, the fear and noise that come with everyday living can obscure our ability to perceive things that aren’t so obvious.

The stories that follow are about people who weren’t at all sure about what they were seeing. Some of them didn’t even believe in the possibility of communicating with the Other Side, but the experiences related here forever changed their beliefs and their worldview. Everyone’s journey is different. Some people are more skeptical than others and need more affirmations. Some feel the love and support right away and quickly learn how to tap into the mystical power of signs and use them to bring change and meaning to their lives.

What’s true in all the stories is that the signs themselves are often simple or ordinary things. They are things that exist in everyday life, and things we normally might not look at twice. A simple orange, for instance. But in choosing an ordinary object or phrase or song or number as our sign, we create a means of connection.

CEREAL IN THE CAR

Back in 2015 I was asked to speak at an event hosted by my publisher, Penguin Random House. A car was sent to my home on Long Island to pick me up and bring me into Manhattan. During the drive, I was quiet. I was thinking about the talk and the things I wanted to share with those in attendance. I should tell you that I have two modes: normal mode and reading mode. When I am open to the Other Side, I am really open. But when I am in normal mode, I’m shut tight. I’ve found that if I’m open too much and do too many readings, it can be physically and emotionally exhausting for me and I can get worn down.

What’s more, reading someone’s energy without his or her permission is invasive—kind of like peeking at someone’s underwear; it’s just not right. So on the drive into the city, being in normal mode, I shut off that part of myself that is open to the Other Side.

And still . . . someone pushed through.

Someone connected to the driver.

I didn’t say anything at first; in fact, it was the driver, a pleasant middle-aged man named Maximo, who spoke first.

“If I may ask, what is your book about?” he said politely.

I told him who I was and what was in my book.

I paused, trying to decide if I should share what I was getting. But since Maximo had opened the conversation, I felt it would be okay.

“You have a son on the Other Side, don’t you?” I asked him, though the connection was so clear it was more of a statement than a question.

That wasn’t the name I was hearing.

“Hmmmm,” I said, “the name that I’m hearing is a V name. It actually sounds like the word ‘version.’”

“Oh my God,” said Maximo. “Virgil. We called him Virgil.”

Then Virgil showed me something that seemed completely random.

“Why is he giving me a bowl of cereal?” I asked the driver. “Why does he want me to talk to you about cereal?”

“He was known for eating cereal,” he said with a laugh. “Breakfast, lunch, dinner, every day. I was worried he wasn’t getting enough nutrients. He just loved eating cereal.”

Then Maximo said he thought he’d recently received a sign from Virgil.

“You know, we had a conversation once, out of the blue, about what signs we would send each other if one of us died,” he explained. “And his sign was Ninja Turtles. He adored the Ninja Turtles.”

Maximo told me how he had forgotten that conversation by the time Virgil crossed in his early 20s. But then, one day, Maximo’s young daughter came home and announced her new obsession.

“She is crazy about the Ninja Turtles,” Maximo told me. “Suddenly she has to have everything with a Ninja Turtle. It came out of nowhere. I knew that was Virgil coming around, and that he was watching over her. I knew it was a sign for me, too.”

Virgil then showed me one more thing—he showed me an older man with a name that began with M. He showed me that the man was his grandfather, and that they were together on the Other Side.  I shared that with Maximo.

“Oh my God,” Maximo said. “Virgil came to me in a dream, and I saw him with my father, who was also Maximo. They were together.”

At that moment I realized that every message Virgil conveyed to me was a message that Maximo had already received.

Laura Lynne Jackson is a high school English teacher and psychic medium who has been certified by the Windbridge Institute for Applied Research in Human Potential and the Forever Family Foundation. She lives on Long Island with her husband and their three children. This is her first book. 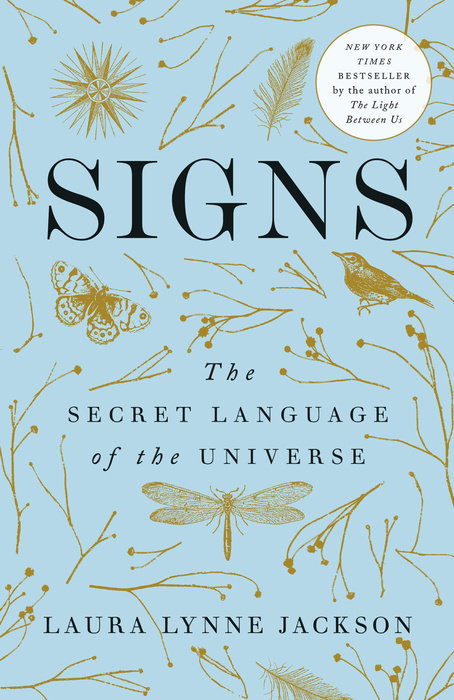