Three generations of women strive for real freedom in this startling, provocative novel exploring sexuality, gender, and maternal ambivalence, from the acclaimed author of The Best Kind of People.

“Whittall addresses motherhood and autonomy in ways I've never seen done before. A fascinating stunner of a novel, The Spectacular is exactly that: spectacular!”—Kristen Arnett, author of With Teeth

It’s 1997 and Missy is a cellist in an indie rock band on tour across America. At twentytwo years old, she gets on stage every night and plays the song about her absent mother that made the band famous. As the only girl in the band, she’s determined to party just as hard as everyone else, loving and leaving a guy in every town. But then she meets a tomboy drummer who is hard to forget, and a forgotten flap of cocaine strands her at the border.

Fortysomething Carola is just surfacing from a sex scandal at the yoga center where she has been living when she sees her daughter, Missy, for the first time in ten years—on the cover of a music magazine.

Ruth is eighty-three and planning her return to the Turkish seaside village where she spent her childhood. But when her granddaughter, Missy, winds up crashing at her house, she decides it’s time  that the strong and stubborn women in her family find a way to understand one another again.

In this sharply observed novel, Zoe Whittall captures three very different women who each struggle to build an authentic life. Definitions of family, romance, gender, and love will radically change as they seek out lives that are nothing less than spectacular.

An excerpt from The Spectacular


We are dripping in America by the middle of the tour and feeling pretty good about ourselves. I’m in an airfield outside Baltimore, playing my f***ing heart out. The crowds are stomping. Hands crushing beer cups. Arms raised in group awe. When the audience is with us, we own them. Their love is embarrassing and beautiful but also crazy to fathom. Here we are, the Swearwolves, a bunch of music-school geeks, but now we’re all so f***able. And I love us. My tits through a thin T-shirt that reads the Bite tour are on the cover of Spin magazine. I’m not even sick to death of half the new songs yet. When we reach the end of the set and Billy says our names, introducing us one by one, I fall in love with everyone, even when Tom prolongs the drum solo to a masturbatory length.

And there is James. I want James. He’s in the front row, which is where I first met him. He’s that record store guy at every show, hanging around so much he’s genuinely friends with the band. He has an adoring face, a hot interrogation light, but a flattering one. His hair is golden, curled downbelow his shoulders. But he hasn’t been front and center since New York last year.

Near the end of our set, the crowd is a hungry mass and we are feeding them. I’m playing rhythm guitar for this song, and I kick out my leg toward James. He gives me a wink. I can feel the way he likes to wrap one hand around my hair and pull gently, and then with force. As we hold each other’s gaze, I’m briefly alight, floating above the sold-out crowd.

The gender split in the major live music scene is a little like the army, a woman here and there, but mostly you are on your own. There’s no one to borrow a tampon from, and the girls my bandmates hook up with aren’t ever around long enough to get too deep. You have to watch your back, or try to make the most of it. I didn’t want to be prey, and so I became a type of predator, a slinking she-wolf bathed in gin and audience adoration with a boy in nearly every port. The boy in Baltimore was James, though he’d been my East Village hookup for about a year and a half. James rips off his T-shirt. He screams the chorus. He bangs his fist on the edge of the stage. The teenage girls in the front row don’t know what to make of his frenzy.

I was a shy kid in high school. I didn’t even try a sip of beer until after my eighteenth birthday. And here I am, a few years after graduation, taking a full-year break from the conservatory, and there’s my photo in Rolling Stone, backstage with Kim Deal at a festival. Our first solo tour feels like the endless present. People aren’t just recognizing Billy when we pull into rest stops, or in the aisles of CVS picking up hand lotion and condoms. They know who I am. I hear my own voice over the radio sometimes. It’s a rush. I get cocky. We all do. It’s so easy to see a clear story in retrospect, but in the middle of it, all I feel is hands and mouths, Sharpies thrust forward to sign T-shirts, the sound of applause and the birdlike whoops of those fans in a moment of transcendence, the taste of beer and lemon Snapple, the cold hotel pillow at the end of the night. It’s the middle of the orgy, and all we have are feelings, so many feelings, and all of them colossal, creeping through our bodies and messing with our minds.

I play each song without thinking about the notes. Some songs on the cello, others on guitar. I have a tattoo across the knuckles on my left hand that reads more. My father told me it was my first word. In these moments onstage, I am more body than brain, and I don’t need my brain to play each note flawlessly. My mind is concerned mostly with two things: how many songs are left before I can see James, and the fat crow sitting on the amplifier. The crow is looking at me too intently. I give him a pacifying nod.

Crows will always remember your face. If you throw an empty coffee cup at a crow, it tells its buddies. They look after their own. They can live for a hundred years. I didn’t f*** with the crow. Tom did. By accident. Tom’s not an asshole; he just didn’t see the crow lounging on the rim of the dumpster before he threw the cup. He’s got drummer arms, so the cup went too fast, too hard. Surprised them both.

It stopped raining just before our set. A rainbow cradled in thousands of upturned palms. Shirts were stuck to their chests with rainwater and sweat. I look at my left hand. It’s moving along the frets again. If you do something a million times you’ll just keep doing it. Even when you’re gone. Like when you pull up to your house and don’t remember driving there.

Billy stands with his arms stretched open, like he’s trying to embrace the whole audience, his eyes closed. Rolling Stone magazine hailed this song as the “anthem of the year” and I can see hearts swelling. I wrote the song. Billy hates that.

Tom likes it, he says it keeps Billy humble.

Being in a band is kind of like group dating. If everyone is selfish at the same time, it doesn’t work. We can’t all be the deadbeat dad. I try not to be the mom, just because I’m the girl, and I’d never be able to compete with Tom, who moms us the best. He reminds us to eat dark green vegetables, get at least four hours of sleep a night. Last week in Albany we blanched fists of broccoli in chipped Travelodge coffee mugs with hot water meant for tea, coffee filters tented on top to seal in the heat. I ripped open a small paper packet of salt with my teeth for seasoning. The half-torn packet salted the sweaty change in my back pocket for days.

I come back to the song, now almost over, as my watermelon gum fades of its flavor and goes soft and pink in my mouth. It was great until it wasn’t, and I go to spit it out but will it poison the crow? I can’t chance it. My T-shirt smells like a gamy blend of sweat and lemon Speed Stick. Touring means bacteria is always at war with heat and fabric. I started the tour with shiny-new pink sneakers, limited edition Converse One Stars, and now they’re cracked from overuse, and one heel of my combat boots is worn down so I’ve been walking with a slight limp from a nail slowly moving up through the sole.

The crowd always grows taller for the final song. Off to the side, on top of the Marshall stacks, three more crows appear. I didn’t throw the cup: I try to say that with my eyes. Animals can read emotion. The crows’ feathers seem to puff up, like a group of guys at last call looking for a fight. Birds make me nervous. So many feathers and tiny bones, nothing of substance. They’re a gang. They’re after us. It was my job to collect the eggs in the henhouse when I was a kid. They saw my little hands for what they were—perfect for pecking. I never got over it.

Tom catches my eye, gives me a You okay? I give my head a nod toward the crows. Now they are six. He laughs.

I turn back to the crowd. James and I hold eye contact. He rubs one hand against his beard, winks. Bookended by two openhearted girls, singing their guts out. The last time we met up was in New York City last year, opening for another band at the Bowery Ballroom. He’d told me he was moving to Baltimore.

“Baltimore is cheap and full of artists. Houses for sixty thousand dollars!” He yelled this in a triumphant staccato over breakfast at a diner in the East Village where we’d lined up Tylenol, plastic cups of apple juice, and coffee, trying to quell a hangover. I aimed the toe of my right foot toward his lap, a purposeful graze up and down, trying to get him to break. Show it in your face. He refused, though I felt precisely how I was affecting him. Instead, a slow sip of his coffee, eyes locked to mine in a dare. James. He would not break. He could meet me.

“Be my girlfriend,” he said, ragged breath.

The server was my saving grace, gliding over, coffee pot cocked on one hip.

“God yes,” I said, a little too relieved. “But also no, to answer your question. What we have is great.”

I’ve always grown bored too quickly. I read the last page of novels first, to know if I should bother. I have a lot of lovers across the country. What’s the point of being a touring musician if your bed, in addition to being unpredictable, is also cold?

James knew that. He worked in a record store. He could get any shy, hot pussy in a cardigan with ironic lapel buttons he wanted. For some reason, he wanted me. That day, anyway.

Zoe Whittall is the author of three previous novels, including the Giller-shortlisted The Best Kind of People, the Lambda-winning Holding Still for As Long As Possible, and her debut, Bottle Rocket Hearts. She has published three collections of poetry: The Best Ten Minutes of Your Life, Precordial Thump, and The Emily Valentine Poems. She is also a Canadian Screen Award–winning TV and film writer, with credits on the Baroness von Sketch Show, Schitt’s Creek, Degrassi, and others. 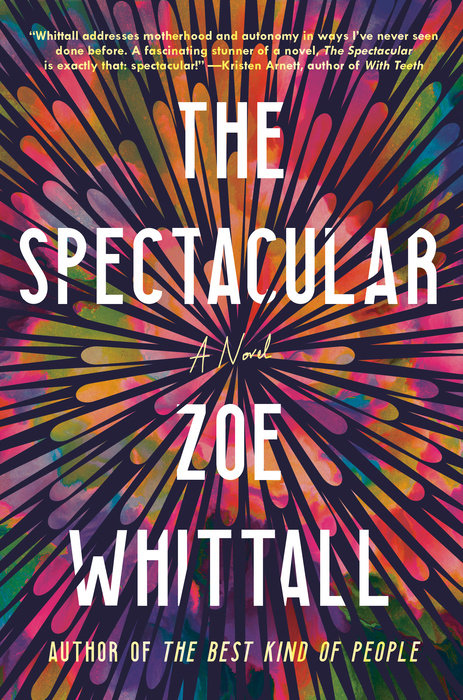