Deradicalization and the Journey Back from Extremism

A “provocative and deeply reported look into the emerging field of deradicalization” (Esquire), told through the stories of former militants and the people working to bring them back into society, from National Book Award and Pulitzer Prize finalist Carla Power

What are the roots of radicalism? Journalist Carla Power came to this question well before the January 6, 2021, attack in Washington, D.C., turned our country’s attention to the problem of domestic radicalization. Her entry point was a different wave of radical panic—the way populists and pundits encouraged us to see the young people who joined ISIS or other terrorist organizations as simple monsters. Power wanted to chip away at the stereotypes by focusing not on what these young people had done but why: What drew them into militancy? What visions of the world—of home, of land, of security for themselves and the people they loved—shifted their thinking toward radical beliefs? And what visions of the world might bring them back to society?

Power begins her journey by talking to the mothers of young men who’d joined ISIS in the UK and Canada; from there, she travels around the world in search of societies that are finding new and innovative ways to rehabilitate former extremists. We meet an American judge who has staked his career on finding new ways to handle terrorist suspects, a Pakistani woman running a game-changing school for former child soldiers, a radicalized Somali American who learns through literature to see beyond his Manichean beliefs, and a former neo-Nazi who now helps disarm white supremacists. Along the way Power gleans lessons that get her closer to answering the true question at the heart of her pursuit: Can we find a way to live together?

An eye-opening, page-turning investigation, Home, Land, Security speaks to the rise of division and radicalization in all forms, both at home and abroad. In this richly reported and deeply human account, Carla Power offers new ways to overcome the rising tides of extremism, one human at a time.

An excerpt from Home, Land, Security

Under a November sky, damp and gray as a dirty dishrag, I traveled from my home in Brighton up to Birmingham, in the British Midlands, to meet Nicola Benyahia, the mother of a young man who’d fought for ISIS in Syria. I was nervous. In the days leading up to the meeting, Nicola’s image had grown to mythic proportions in my mind. As the militant group intent on establishing a caliphate had gained land and followers, I’d been drip-­fed horrors about hardened warriors who had put a Jordanian pilot in a cage and set him alight, who had made Yazidi women into sex slaves, who had tossed men off buildings for being gay. What kind of woman could have raised one of these fighters?

As the train rattled through the English countryside, I steadied my cappuccino and tried to concentrate on the reading in front of me: a short tract by a British law professor on the need for new ways to talk about terrorism, both in the courts and in public life. Formulating laws on terrorism, wrote Newcastle University’s Ian Ward, required “an ethics that properly understands the vitality of human emotions.” Ideally, we needed “an alternative jurisprudence, one that owes at least as much to feeling and compassion as it does to reason and the pretense of certitude,” Ward wrote. “We have far less need of a ‘law’ of terrorism than we do a better developed sensitivity to the tragedies that it engenders.”

I underlined the quote, scrawling a messy star beside it. If law is the only lens through which we view terrorists, we are training our eyes on a barren landscape, stripped of any clues as to what made people into terrorists in the first place.

Motherhood seemed to me the most direct route into an emotional understanding of the terrorist threat. It was the only thing I imagined I’d share with this woman, and I figured it might be a way toward some sort of humanization, perhaps even understanding, of people who’d been dehumanized and misunderstood. One generally doesn’t think about ISIS fighters as people with mothers. Monsters and demons tend to be motherless, as nothing humanizes a person more than a mother. War propagandists know this well, pushing the fiction that We have mothers and They don’t. A British government ad selling bonds during World War II shows a Blitz-­era Madonna cuddling a baby—­a pink, white, and blond vision of hearth and home. From the side of the frame, monstrous gray claws branded with a swastika paw at the mother, under the slogan “Keep these hands off!”

The fact of having a mother telegraphs an earlier dependence, a reminder that the individual wasn’t always in charge of his own destiny. This is why adolescents prefer not to be seen with this living proof that they were only recently babies. Test this assertion, if you like, by checking with any child who’s ever been dropped off at the school dance by their parents, or with any parent who’s ever endured a curt “Okay, bye now . . . please just go. Please? Now?” through their child’s gritted teeth. To spare my own offspring the shame of being seen as people with mothers, I have, at various school gates and street corners, willed myself to look invisible. Ask your own mother: I’ll bet she did it, too. Mothers are living, breathing reminders of our mewling infanthood, of humanity at its frailest.

I went up to Birmingham in search of a terrorist’s origin story, which inevitably put me in the company of his mother. Nobody has a bigger stake in making the case for their child’s humanity. No security agency could wish for a more zealous investigator than a mother pacing and thinking back over a child’s past, looking for clues as to why they did what they did. We’re good at retracing steps, we mothers: I know it well from personal experience, having lain awake night’s, staring at the ceiling, trying to figure out just what I’d done, or what I’d missed, that led my children to a particular misery or mistake. Of course, maternal love doesn’t necessarily make for an objective witness. Indeed, it can blind. (“Al, he’s a good boy,” the mother of the American gangster Al Capone reportedly murmured on her deathbed.) Still, if I wanted to understand how one boy became a terrorist, and how he might have been stopped, meeting his mother felt vital.

In recent years, counterterrorism experts have seized on motherhood as a potential weapon for fighting violent extremism. The United Nations has called for more explicit attempts to include women in counterterrorism work. An Austrian NGO, Women Without Borders, started Mothers Schools around the world, training women from En­gland to Palestine to spot signs of extremism in their families and communities, and to feel empowered enough to speak out about it. At a conference on counterterrorism, I once heard the founder, Dr. Edit Schlaffer, explain to a roomful of security experts why mothers could be so effective at what she called “the first line of defense against extremism.” It came down to time and love. “A mother will never give up,” she told the crowd. “She’ll invest as much time as necessary, and won’t clock the hours when it comes to protecting her children.”

Not everyone is convinced. Critics point out that the trend simply reinforces traditional gender roles, of the mother as the docile caregiver, the sentry of her child’s soul. “Policy makers in Washington, London, Baghdad, and New York want to mobilize an army of mothers to fight their cause,” wrote Sanam Naraghi-­Anderlini, founder of the women’s rights, peace, and security group ICAN, of the new interest in mothers as a counterterrorism strategy. “But they want mothers who do not challenge them. The motherhood paradigm packages women in apolitical and non-­threatening ways according to traditional, and even biological norms of femininity—­it is the image of the lioness protecting her cubs. . . . [By] pressing them to act as frontline whistleblowers, governments are using women. As one Iraqi woman notes, ‘the government wants women to mop up their mess.’ ”

At its worst, the motherhood vogue in counterextremism recalls the go-­to neoliberal solution to other problems in society: Mom will fix it better. Like childcare or looking after aging parents, it’s seen not as a collective problem but rather as something families—­read women—­can figure out in the privacy of their own homes. As one mother joked to me, “I work full time, and now I have to fight terrorism, too?”

If the official interest in mothers as counterterrorism tools buys into an essentialized vision of mothers as keepers of the home and hearth, I was guilty of it too. It rankled me, as a feminist, to endorse motherhood over fatherhood as the emotional ground zero for families. But from a reportorial angle, this bias is unavoidable, because it is usually the mothers of the young Western jihadis who seek help and speak out. “Sixty-­five to seventy percent of the time, it’s the mother that makes the first contact with us,” says Claudia Dantschke, who works with Hayat, a German organization supporting families whose children had joined Islamist violent extremism groups. Mothers are generally the ones who have called hotlines, formed international support networks, sought counseling, and talked publicly about their children’s paths into militancy and their own pain.

If grief has propelled a handful of mothers of ISIS fighters to speak out, it seems to have had the opposite effect on fathers, whose pain seemed to sink them into silent depression. As one grieving mother told me, “If it was up to me, I would have spoken out about it a long time ago. I was so passionate about the fact that we have to change how we’re talking about this. But I had to be very sensitive to my husband, who went off into his cave and would just go numb.”

Mothers may have spoken out more than fathers, but in truth, few parents are willing to speak in public at all. As my train pulled into the Birmingham station, it occurred to me that the silence surrounding these young people worked to seal their image as terrorists. Talking to Nicola Benyahia, I hoped, would help me complicate that image.

Birmingham’s train station opens into a vast concrete square. Businesspeople paced while waiting for their Ubers. Pairs of graying matrons picked their way across the slick pavement, arms linked. Knots of high-­ponytailed teenage girls chattered, heading for the mall in the station. Scanning for Nicola, I instinctively fell back on stereotype and found myself looking around for someone severe and unsmiling, perhaps in a black burqa. But then I saw a figure across the square waving cheerily and clipping briskly ­toward me in stiletto heels.

Carla Power is the author of If the Oceans Were Ink, a finalist for both the Pulitzer Prize and the National Book Award. She was raised in St. Louis, with years in Iran, India, Afghanistan, Egypt, and Italy. Her work has appeared in numerous publications, including Time, The New York Times, Foreign Policy, Vogue, Vanity Fair, and The Guardian. She lives with her family in East Sussex, England.

Deradicalization and the Journey Back from Extremism 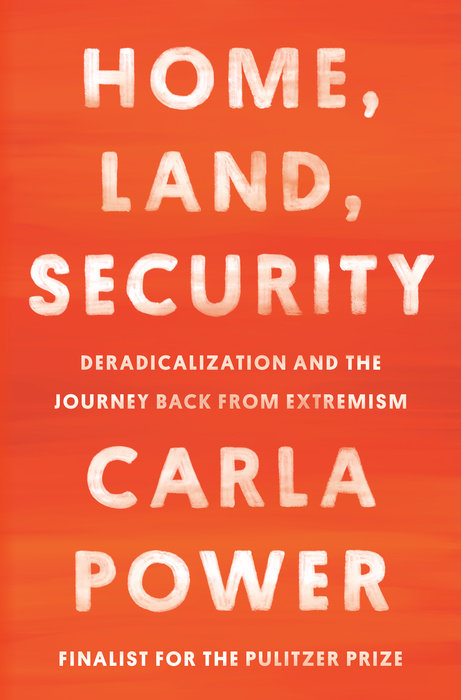