This classic science fiction masterwork by Isaac Asimov weaves stories about robots, humanity, and the deep questions of existence into a novel of shocking intelligence and heart.

“A must-read for science-fiction buffs and literature enjoyers alike.”—The Guardian

I, Robot, the first and most widely read book in Asimov’s Robot series, forever changed the world’s perception of artificial intelligence. Here are stories of robots gone mad, of mind-reading robots, and robots with a sense of humor. Of robot politicians, and robots who secretly run the world—all told with the dramatic blend of science fact and science fiction that has become Asimov’s trademark.

With these three, simple directives, Isaac Asimov formulated the laws governing robots’ behavior. In I, Robot, Asimov chronicles the development of the robot from its primitive origins in the present to its ultimate perfection in the not-so-distant future—a  future in which humanity itself may be rendered obsolete.

“Tremendously exciting and entertaining . . . Asimov dramatizes an interesting question: How can we live with machines that, generation by generation, grow more intelligent than their creators and not eventually clash with our own invention?”—The Chicago Tribune

An excerpt from I, Robot

"Ninety-eight--ninety-nine--one hundred." Gloria withdrew her chubby little forearm from before her eyes and stood for a moment, wrinkling her nose and blinking in the sunlight. Then, trying to watch in all directions at once, she withdrew a few cautious steps from the tree against which she had been leaning.

She craned her neck to investigate the possibilities of a clump of bushes to the right and then withdrew farther to obtain a better angle for viewing its dark recesses. The quiet was profound except for the incessant buzzing of insects and the occasional chirrup of some hardy bird, braving the midday sun.

Gloria pouted, "I bet he went inside the house, and I've told him a million times that that's not fair."

With tiny lips pressed together tightly and a severe frown crinkling her forehead, she moved determinedly toward the two-story building up past the driveway.

Too late she heard the rustling sound behind her, followed by the distinctive and rhythmic clump-clump of Robbie's metal feet. She whirled about to see her triumphing companion emerge from hiding and make for the home-tree at full speed.

Gloria shrieked in dismay. "Wait, Robbie! That wasn't fair, Robbie! You promised you wouldn't run until I found you." Her little feet could make no headway at all against Robbie's giant strides. Then, within ten feet of the goal, Robbie's pace slowed suddenly to the merest of crawls, and Gloria, with one final burst of wild speed, dashed pantingly past him to touch the welcome bark of home-tree first.

Gleefully, she turned on the faithful Robbie, and with the basest of ingratitude, rewarded him for his sacrifice by taunting him cruelly for a lack of running ability.

Robbie didn't answer, of course--not in words. He pantomimed running instead, inching away until Gloria found herself running after him as he dodged her narrowly, forcing her to veer in helpless circles, little arms outstretched and fanning at the air.

"Robbie," she squealed, "stand still!"--And the laughter was forced out of her in breathless jerks.

--Until he turned suddenly and caught her up, whirling her round, so that for her the world fell away for a moment with a blue emptiness beneath, and green trees stretching hungrily downward toward the void. Then she was down in the grass again, leaning against Robbie's leg and still holding a hard, metal finger.

After a while, her breath returned. She pushed uselessly at her disheveled hair in vague imitation of one of her mother's gestures and twisted to see if her dress were torn.

She slapped her hand against Robbie's torso, "Bad boy! I'll spank you!"

And Robbie cowered, holding his hands over his face so that she had to add, "No, I won't, Robbie. I won't spank you. But anyway, it's my turn to hide now because you've got longer legs and you promised not to run till I found you."

Robbie nodded his head--a small parallelepiped with rounded edges and corners attached to a similar but much larger parallelepiped that served as torso by means of a short, flexible stalk--and obediently faced the tree. A thin, metal film descended over his glowing eyes and from within his body came a steady, resonant ticking.

With unvarying regularity, seconds were ticked off, and at the hundredth, up went the eyelids, and the glowing red of Robbie's eyes swept the prospect. They rested for a moment on a bit of colorful gingham that protruded from behind a boulder. He advanced a few steps and convinced himself that it was Gloria who squatted behind it.

Slowly, remaining always between Gloria and home-tree, he advanced on the hiding place, and when Gloria was plainly in sight and could no longer even theorize to herself that she was not seen, he extended one arm toward her, slapping the other against his leg so that it rang again. Gloria emerged sulkily.

"You peeked!" she exclaimed, with gross unfairness. "Besides I'm tired of playing hide-and-seek. I want a ride."

But Robbie was hurt at the unjust accusation, so he seated himself carefully and shook his head ponderously from side to side.

Gloria changed her tone to one of gentle coaxing immediately, "Come on, Robbie. I didn't mean it about the peeking. Give me a ride."

Robbie was not to be won over so easily, though. He gazed stubbornly at the sky, and shook his head even more emphatically.

"Please, Robbie, please give me a ride." She encircled his neck with rosy arms and hugged tightly. Then, changing moods in a moment, she moved away. "If you don't, I'm going to cry," and her face twisted appallingly in preparation.

Hard-hearted Robbie paid scant attention to this dreadful possibility, and shook his head a third time. Gloria found it necessary to play her trump card.

Robbie gave in immediately and unconditionally before this ultimatum, nodding his head vigorously until the metal of his neck hummed. Carefully, he raised the little girl and placed her on his broad, flat shoulders.

Gloria's threatened tears vanished immediately and she crowed with delight. Robbie's metal skin, kept at a constant temperature of seventy by the high resistance coils within, felt nice and comfortable, while the beautifully loud sound her heels made as they bumped rhythmically against his chest was enchanting.

The logic was irrefutable. Robbie's arms were wings catching the air currents and he was a silver 'coaster.

Gloria twisted the robot's head and leaned to the right. He banked sharply. Gloria equipped the 'coaster with a motor that went "Br-r-r" and then with weapons that went "Powie" and "Sh-sh-shshsh." Pirates were giving chase and the ship's blasters were coming into play. The pirates dropped in a steady rain.

Then "Faster, men," Gloria said pompously, "we're running out of ammunition." She aimed over her shoulder with undaunted courage and Robbie was a blunt-nosed spaceship zooming through the void at maximum acceleration.

Clear across the field he sped, to the patch of tall grass on the other side, where he stopped with a suddenness that evoked a shriek from his flushed rider, and then tumbled her onto the soft, green carpet.

Gloria gasped and panted, and gave voice to intermittent whispered exclamations of "That was nice!"

Robbie waited until she had caught her breath and then pulled gently at a lock of hair.

"You want something?" said Gloria, eyes wide in an apparently artless complexity that fooled her huge "nursemaid" not at all. He pulled the curl harder.

Robbie made a semi-circle in the air with one finger.

The little girl protested, "Again? I've told you Cinderella a million times. Aren't you tired of it? --It's for babies."

"Oh, well," Gloria composed herself, ran over the details of the tale in her mind (together with her own elaborations, of which she had several) and began:

"Are you ready? Well--once upon a time there was a beautiful little girl whose name was Ella. And she had a terribly cruel step-mother and two very ugly and very cruel step-sisters and--"

Gloria was reaching the very climax of the tale--midnight was striking and everything was changing back to the shabby originals lickety-split, while Robbie listened tensely with burning eyes--when the interruption came.

It was the high-pitched sound of a woman who has been calling not once, but several times; and had the nervous tone of one in whom anxiety was beginning to overcome impatience.

"Mamma's calling me," said Gloria, not quite happily. "You'd better carry me back to the house, Robbie."

Robbie obeyed with alacrity for somehow there was that in him which judged it best to obey Mrs. Weston, without as much as a scrap of hesitation. Gloria's father was rarely home in the daytime except on Sunday--today, for instance--and when he was, he proved a genial and understanding person. Gloria's mother, however, was a source of uneasiness to Robbie and there was always the impulse to sneak away from her sight.

Mrs. Weston caught sight of them the minute they rose above the masking tufts of long grass and retired inside the house to wait.

"I've shouted myself hoarse, Gloria," she said, severely. "Where were you?"

"I was with Robbie," quavered Gloria. "I was telling him Cinderella, and I forgot it was dinner-time."

"Well, it's a pity Robbie forgot, too." Then, as if that reminded her of the robot's presence, she whirled upon him. "You may go, Robbie. She doesn't need you now." Then, brutally, "And don't come back till I call you." 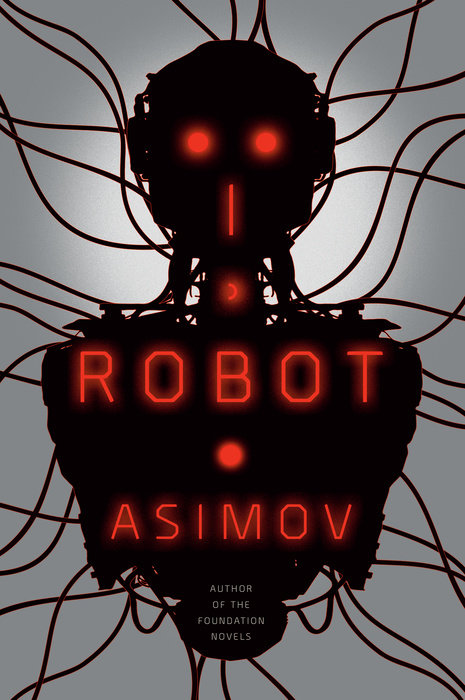