Creating Physical and Emotional Health During the Change

Newly revised and updated for this fourth edition, this groundbreaking book has inspired more than a million women with a dramatically new vision of midlife—and will continue to do so for generations to come.

As Dr. Christiane Northrup explains, the “change” is not simply a collection of physical symptoms to be “fixed,” but a mind-body revolution that brings the greatest opportunity for growth since adolescence. The choices a woman makes now—from the quality of her relationships to the quality of her diet—have the power to secure vibrant health and well-being for the rest of her life.

In this fourth edition, Dr. Northrup draws on the current research and medical advances in women’s health, including:

•  Up-to-date information on hormone testing and hormone therapy, with new options and new research
•  A whole new take on losing weight and training your mind to release extra pounds
•  New insights on the relationship between thyroid, Hashimoto's Disease, and Epstein Bar Syndrome
•  New, less invasive and more effective fibroid treatments
•  Which supplements are better than botox for keeping skin looking youthful
•  How taking the supplement Pueraria mirifica can optimize many aspects of midlife health and wellness
•  Why older women don't need the HPV vaccine

With this trusted resource, Dr. Christiane Northrup shows that women can make menopause a time of personal empowerment—emerging wiser, healthier, and stronger in both mind and body than ever before.

An excerpt from The Wisdom of Menopause (4th Edition)

Menopause Puts Your Life Under a Microscope

It is no secret that relationship crises seem to go hand in hand with menopause. Usually this is attributed to the crazy-making effects of the hormonal shifts occurring in a woman’s body at this time of transition. What is rarely acknowledged or understood is that as these hormone-driven changes affect the brain, they give a woman a sharper eye for inequity and injustice, and a voice that insists on speaking up about them. In other words, they uncover hidden wisdom—and the courage to voice it. As the vision-obscuring veil created by the hormones of reproduction and one’s cultural programming begins to lift, a woman’s youthful fire and spirit are often rekindled, together with long-sublimated desires and creative drives. Midlife fuels those drives with a volcanic energy that demands an outlet.

If it does not find an outlet—if the woman remains silent for the sake of keeping the peace at home or work, or if she holds herself back from pursuing her creative urges and desires—the result is equivalent to plugging the vent on a pressure cooker: something has to give. Very often what gives is the woman’s health, and the result will be one or more of the “big three” diseases of postmenopausal women: heart disease, depression, and breast cancer. On the other hand, for those of us who choose to honor the body’s wisdom and to express what lies within us, it’s a good idea to get ready for some boat rocking, which may put long-established relationships in upheaval. Marriage is not immune to this effect.

“NOT ME, MY MARRIAGE IS FINE”

Every marriage or partnership, even a very good one, must undergo change in order to keep up with the hormone-driven rewiring of a woman’s brain during the years leading up to and including menopause. Not all marriages are able to survive these changes. Mine wasn’t, and nobody was more surprised about that than I. If this makes you want to hide your head in the sand, believe me, I do understand. But for the sake of being true to yourself and protecting your emotional and physical health in the second half of your life—likely a full forty years or more—then I submit to you that forging ahead and taking a good hard look at all aspects of your relationship (including some previously untouchable corners of your marriage) may be the only choice that will work in your best interest in the long run, physically, emotionally, and spiritually.

From the standpoint of physical health, for example, there is plenty of evidence to suggest that the increase in life-threatening illnesses after midlife, which cannot be accounted for simply because of growing older, is partly rooted in the stresses and unresolved relationship problems that simmered beneath the surface during the childbearing years of a woman’s life, then bubbled up and boiled over at perimenopause, only to be damped down in the name of maintaining the status quo. The health of your significant other is also at stake. Remaining in a relationship that was tailor-made for a couple of twentysomethings without making the necessary adjustments for who you both have become at midlife can be just as big a health risk for him as it is for you.

This is not to say that your only options are divorce or heart attack. Rather, in order to bring your relationship into alignment with your rewired brain, you and your significant other must be willing to take the time and spend the energy to resolve old issues and set new ground rules for the years that lie ahead. If you can do this, then your relationship will help you to thrive in the second half of your life. If one or both of you cannot or will not, then both health and happiness may be at risk if you stay together. One of the most common midlife wake-up calls for women (and many men, for that matter) is the realization that you have been pouring your life energy into a dead-end job or relationship that will never change—no matter how much you care or how much you give. Like the line in the popular song “Say Something,” which Christina Aguilera helped make famous, you finally have to face the truth about some of the characters who have been draining your bank account or life energy account without ever replenishing it. They are not going to change no matter how much faith, hope, and commitment you possess. For those who have almost unlimited faith in the power of hope and love, this realization is simultaneously devastating and liberating. And the pattern is so common that I wrote a separate book on the subject, entitled Dodging Energy Vampires: An Empath’s Guide to Evading Relationships That Drain You and Restoring Your Health and Power (Hay House, 2018). More on that later.

At midlife, more psychic energy becomes available to us than at any time since adolescence. If we strive to work in active partnership with that organic energy, trusting it to help us uncover the unconscious and self-destructive beliefs about ourselves and our unhealed hurts that have held us back from what we could become, then we will find that we have access to everything we need to reinvent ourselves as healthier, more resilient women, ready to move joyfully into the second half of our lives.

This process of transformation can only succeed, however, if we become proactive in two ways. First, we must be willing to take full responsibility for the problems in our lives. This is the most difficult step you will ever take, and the most liberating one. It takes great courage to admit our own contributions to the things that have gone wrong for us and to stop seeing ourselves simply as victims of someone or something outside of ourselves. Even if it’s true, such as in cases of sexual abuse or domestic violence, we must not allow ourselves to stay in this victim role overly long, because continuing this stance and arguing for it long after the initial trauma is over is ultimately devoid of any power to help us change, heal, grow, and move on to a more fulfilling and joyful life. And trust me, each of us has far more power to create a joy-filled life than we’ve been led to believe.

The second requirement for transformation is more difficult by far: we must be willing to feel the pain of loss and grieve those parts of our lives that we are leaving behind. And that includes our fantasies of how our lives could have been different if only. Facing and feeling such loss is rarely easy, and that is why so many of us resist change in general and at midlife in particular. A part of us rationalizes, “Why rock the boat? I’m halfway finished with my life. Wouldn’t it just be easier to accept what I have rather than risk the unknown?”

The end of any significant relationship, be it a marriage, a job, or any major phase of our lives, even one that has made us unhappy or held us back from our full growth and fulfillment, feels like a death—pure and simple. To move past it, we have to feel the sadness of that loss and grieve fully for what might have been and now will never be. And we must speak the truth of it out loud without trying to make it sound noble or uplifting. We must be willing to break the silence that keeps so many women stuck in dead-end situations.

And then we must pick ourselves up and move toward the unknown. All our deepest fears are likely to surface as we find ourselves facing the uncertainty of the future. During my own perimenopausal life changes, I would learn this in spades—much to my surprise.

By the time I was approaching menopause, I had worked with scores of women who had gone through midlife “cleansings”; I had guided and counseled them as their children left home, their parents got sick, their marriages ended, their husbands fell ill or died, they themselves became ill, their jobs ended—in short, as they went through all the storms and crises of midlife. But I never thought I would face a crisis in my marriage. I had always felt somewhat smug, secure in my belief that I was married to the man of my dreams, the one with whom I would stay “till death do us part.”

Christiane Northrup, M.D., is the host of eight public television specials and the author of numerous books, including the New York Times bestsellers Women's Bodies, Women's Wisdom and Goddesses Never Age. A board-certified OB/GYN, Dr. Northrup has been featured on The Oprah Winfrey Show, The View, the Today show, and Good Morning America, among many others.

Creating Physical and Emotional Health During the Change 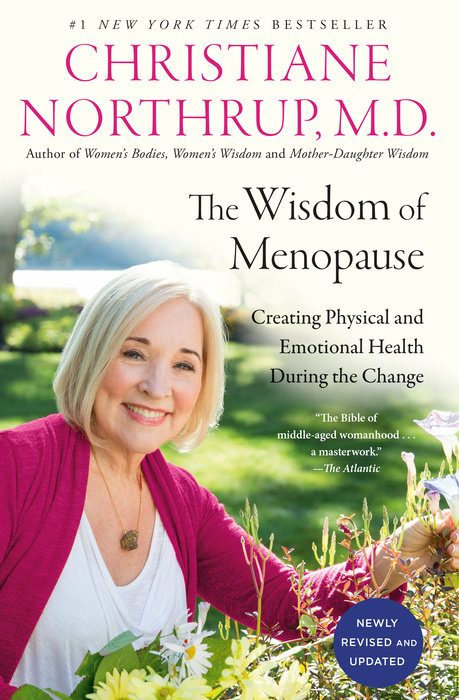