“A totally new and original work that stretches his talents to their fullest . . . welcome back, champ!”—The Detroit News

In the twenty-third century pioneers have escaped the crowded earth for life in self-sustaining orbital colonies. One of the colonies, Rotor, has broken away from the solar system to create its own renegade utopia around an unknown red star two light-years from Earth: a star named Nemesis.

Now a fifteen-year-old Rotorian girl has learned of the dire threat that nemesis poses to Earth’s people—but she is prevented from warning them. Soon she will realize that Nemesis endangers Rotor as well.  And so it will be up to her alone to save both Earth and Rotor as—drawn inexorably by Nemesis, the death star—they hurtle toward certain disaster.

An excerpt from Nemesis

Marlene had last seen the Solar System when she was a little over one year old. She didn’t remember it, of course.

She had read a great deal about it, but none of the reading had ever made her feel that it could ever have been part of her, nor she a part of it.

In all her fifteen years of life, she remembered only Rotor. She had always thought of it as a large world. It was eight kilometers across, after all. Every once in a while since she was ten—once a month when she could manage it—she had walked around it for the exercise, and sometimes had taken the low-gravity paths so she could skim a little. That was always fun. Skim or walk, Rotor went on and on, with its buildings, its parks, its farms, and mostly its people.

It took her a whole day to do it, but her mother didn’t mind. She said Rotor was perfectly safe. “Not like Earth,” she would say, but she wouldn’t say why Earth was not safe. “Never mind,” she would say.

It was the people Marlene liked least. The new census, they said, would show sixty thousand of them on Rotor. Too many. Far too many. Every one of them showing a false face. Marlene hated seeing those false faces and knowing there was something different inside. Nor could she say anything about it. She had tried sometimes when she had been younger, but her mother had grown angry and told her she must never say things like that.

As she got older, she could see the falseness more clearly, but it bothered her less. She had learned to take it for granted and spend as much time as possible with herself and her own thoughts.

Lately, her thoughts were often on Erythro, the planet they had been orbiting almost all her life. She didn’t know why these thoughts were coming to her, but she would skim to the observation deck at odd hours and just stare at the planet hungrily, wanting to be there—right there on Erythro.

Her mother would ask her, impatiently, why she should want to be on an empty barren planet, but she never had an answer for that. She didn’t know. “I just want to,” she would say.

She was watching it now, alone on the observation deck. Rotorians hardly ever came here. They had seen it all, Marlene guessed, and for some reason they didn’t have her interest in Erythro.

There it was; partly in light, partly dark. She had a dim memory of being held to watch it swim into view, seeing it every once in a while, always larger, as Rotor slowly approached all those years ago.

Was it a real memory? After all, she had been getting on toward four then, so it might be.

But now that memory—real or not—was overlaid by other thoughts, by an increasing realization of just how large a planet was. Erythro was. over twelve thousand kilometers across, not eight kilometers. She couldn’t grasp that size. It didn’t look that large on the screen and she couldn’t imagine standing on it and seeing for hundreds—or even thousands—of kilometers. But she knew she wanted to. Very much.

Aurinel wasn’t interested in Erythro, which was disappointing. He said he had other things to think of, like getting ready for college. He was seventeen and a half. Marlene was only just past fifteen. That didn’t make much difference, she thought rebelliously, since girls developed more quickly.

At least they should. She looked down at herself and thought, with her usual dismay and disappointment, that somehow she still looked like a kid, short and stubby.

She looked at Erythro again, large and beautiful and softly red where it was lit. It was large enough to be a planet but actually, she knew, it was a satellite. It circled Megas, and it was Megas (much larger still) that was really the planet, even though everyone called Erythro by that name. The two of them together, Megas and Erythro, and Rotor, too, circled the star Nemesis.

Marlene heard the voice behind her and knew that it was Aurinel. She had grown increasingly tongue-tied with him of late, and the reason for it embarrassed her. She loved the way he pronounced her name. He pronounced it correctly. Three syllables—Mar-LAY-nuh—with a little trill to the “r.” It warmed her just to hear it.

She turned and mumbled, “Hi, Aurinel,” and tried not to turn red.

He grinned at her. “You’re staring at Erythro, aren’t you?”

She didn’t answer that. Of course that’s what she would be doing. Everyone knew how she felt about Erythro. “How come you’re here?” (Tell me you were looking for me, she thought.)

Aurinel said, “Your mother sent me.”

“She said you were in a bad mood and every time you felt sorry for yourself, you came up here, and I was to come and get you because she said it would just make you grumpier to stay here. So why are you in a bad mood?”

“What reasons? Come on, now. You’re not a little kid any more. You’ve got to be able to express yourself.”

Marlene lifted her eyebrows. “I am quite articulate, thank you. My reasons are that I would like to travel.”

Aurinel laughed. “You’ve traveled, Marlene. You’ve traveled more than two light-years. No one in the whole history of the Solar System has ever traveled even a small fraction of a light-year. —Except us. So you have no right to complain. You’re Marlene Insigna Fisher, Galactic Traveler.”

Marlene suppressed a giggle. Insigna was her mother’s maiden name and whenever Aurinel said her three names in full, he would salute and make a face, and he hadn’t done that in a long time. She guessed it was because he was getting close to being a grown-up and he had to practice being dignified.

She said, “I can’t remember that trip at all. You know I can’t, and not being able to remember it means it doesn’t matter. We’re just here, over two light-years from the Solar System, and we’re never going back.”

“Come on, Aurinel. Do you ever hear anyone talk about going back?”

“Well, even if we don’t, who cares? Earth is a crowded world and the whole Solar System was getting crowded and used up. We’re better off out here—masters of all we survey.”

“No, we’re not. We survey Erythro, but we don’t go down there to be its masters.”

“Sure we do. We have a fine working Dome on Erythro. You know that.”

“Not for us. Just for some scientists. I’m talking about us. They don’t let us go down there.”

“Things aren’t that bad. Anyway, come on out of here and into the world and make your mother happy. I can’t stay here. I have things to do. Dolorette—”

Marlene felt a buzzing in her ears and she didn’t hear exactly what Aurinel said after that. It was enough to hear—Dolorette!

“But what was the use? Aurinel had been hanging around her, and Marlene knew, just by looking at him, exactly how he felt about Dolorette. And now he had been sent to find her and he was just wasting his time. She could tell that was how he felt and she could also tell how anxious he was to get back to that—to that Dolorette. (Why could she always tell? It was so hateful sometimes.)

Quite suddenly, Marlene wanted to hurt him, to find words to give him pain. True words, though. She wouldn’t lie to him. She said, “We’re never going back to the Solar System. I know why not.”

“Oh, why’s that?” When Marlene, hesitating, said nothing, he added, “Mysteries?”

“Are we?” Marlene asked. She said, “Okay, I’ll tell you. We’re not ever going back because Earth is going to be destroyed.”

Aurinel didn’t react as she had expected. He burst into a loud squawk of a laugh. It took him a while to settle down, and she glared at him indignantly.

“Marlene,” he said, “where did you hear that? You’ve been viewing thrillers.”

“Because I know. I can tell. From what people say, but don’t say, and what they do, when they don’t know they’re doing it. And from things the computer tells me when I ask the right questions.”

“No, it isn’t possible. Earth won’t be destroyed right away—maybe not for thousands of years—but it’s going to be destroyed.” She nodded solemnly, her face intense. “And nothing can stop it.”

Marlene turned and walked away, angry at Aurinel for doubting her. No, not doubting her. It was more than that. He thought she was out of her mind. And there it was. She had said too much and had gained nothing by it. Everything was wrong.

Aurinel was staring after her. The laughter had ceased on his boyishly handsome face and a certain uneasiness was creasing the skin between his eyebrows. 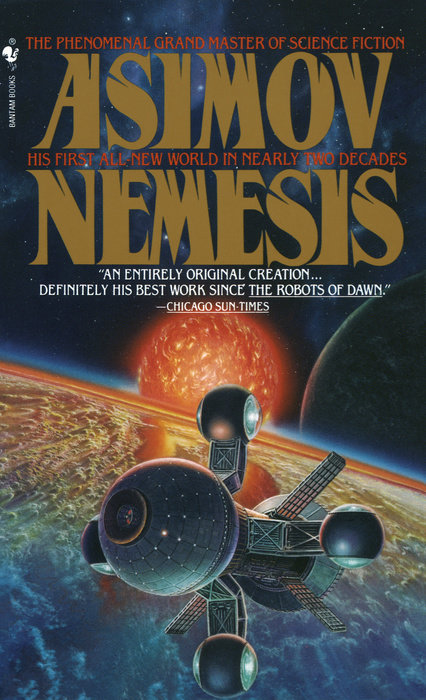