An evil new magic threatens to undo all the progress women have made in the third and final book in Jenna Glass's riveting feminist fantasy series, following The Women's War and Queen of the Unwanted.

In the once male-dominated world of Seven Wells, women now control their own reproduction, but the battle for equality is far from over. Even with two thrones held by women, there are still those who cling to the old ways and are determined to bring them back.

Now into this struggle comes a darker power. Delnamal, the former King of Aalwell, may have lost his battle to undo the spell that gave women reproductive control, but he has gained a terrible and deadly magic—and he uses these new abilities to raise an army the likes of which the world has never seen. Delnamal and his allies seem like an unstoppable force, destined to crush the fragile new balance between men and women.

Yet sometimes it is possible for determined individuals to stem the tide, and it falls to a unique triad of women—maiden, mother, and crone—to risk everything . . . not only to preserve the advances they  have won but to change the world one final time.

A portion of the author’s proceeds from this book is being donated to Planned Parenthood, in support of women’s reproductive freedom.

An excerpt from Mother of All

The windows were open to let in whatever fresh breezes they could, but the air in the royal apartments was nonetheless stifling. Having spent more than a year living in the desert, Tynthanal had thought himself inured to heat, but the climate here in Aaltah seemed far more oppressive than that of Women’s Well, where the air was bone-­dry, and even in the worst heat of summer, the nights were cool. Here in Aaltah, the nearby sea added such a heavy dose of humidity that the air felt thick as porridge.

“Do sit down and eat,” his wife, Kailee, urged, and he reluctantly moved away from the window to join her at the table where a small supper had been laid for them.

Kailee’s face glowed with perspiration, and the few locks of hair that had escaped her headdress were plastered wetly to her neck, but she seemed to accept the discomfort with her customary serenity. A serenity Tynthanal envied as he tried futilely to push up the sleeves of his doublet.

“How I loathe civilian clothes,” he muttered. Custom required he set aside the comfortable shirts and trousers he’d worn in the military and don the doublet and breeches of a gentleman—­with all the concomitant adornment—­but he longed for the days when he could breathe inside his clothing.

Kailee smiled at him as she served herself a helping of stewed vegetables and ignored the beautifully roasted whole fish that took pride of place in the center of the table. Tynthanal frowned.

“I should have asked the cook to fillet it for you,” he said, shaking his head at himself. Their marriage was in its infancy, and he was still getting used to dealing with his wife’s unique challenges in life. It would be no easy feat to avoid fish bones when one could not see them.

Kailee shrugged. “I am used to making do. And I am not overly hungry.”

“Well, you don’t have to ‘make do’ anymore,” he said as he portioned out a serving of fish, inspecting it carefully for bones before sliding it onto her plate. “I think I got them all, but be cautious anyway.”

Her mouth quirked. Tynthanal was still learning how to read her expressions—­he’d never realized before how much he’d relied on a person’s eyes to give away what she was feeling—­but he thought he saw mild reproach. “I have eaten fish before. I know to be careful. And I could have served myself if I’d actually wanted the fish.”

Tynthanal winced and wished he were more at ease with his wife. It had been abundantly clear from the first moment that Kailee was far more self-­sufficient than most people gave her credit for—­and that she found it irritating, if not downright hurtful, when people offered unwanted help. He’d vowed not to be one of those people, yet it was astonishingly easy to fall into that trap. “My apologies,” he said, serving himself while wrestling with the guilt that was becoming his constant companion of late. In Women’s Well, Kailee had gained her freedom by marrying him, escaping the scrutiny of her father and stepmother—­and Rhozinolm high society. And then he had abruptly snatched it back from her by accepting the regency and moving them to Aaltah, where her blindness would once again be treated as a source of shame. To make matters worse, he couldn’t even be a proper husband to her, for his heart had remained in Women’s Well with Chanlix and the child she carried. A pang of longing struck him, but he shoved it aside and tried to stay present with the woman he had married. Just because he did not—­could not—­love her didn’t absolve him of his duties as a husband.

He shoved some fish into his mouth and promptly stabbed himself in the cheek with a fish bone. Kailee smirked when he extracted it from his mouth. Her worldly vision might not function, but with her Mindseye always open, she could see the aura of Rho that surrounded every living thing. Which allowed her to see many gestures—­such as digging a fish bone out of one’s mouth.

“You seem out of sorts,” Kailee commented as she picked at her dinner. “Will you think me nosy if I ask why?”

“You’re my wife,” he said. “You’re allowed to be nosy.” He put a teasing lilt into his voice, although in truth her perspicacity often unnerved him. She shouldn’t know him well enough yet to see that he was “out of sorts.” He pulled at the neckline of his doublet, which was soaked with sweat and clinging unpleasantly. He should have asked for a cold supper but had been too distracted to think of it.

“I’m glad to hear it,” Kailee said. “Are you planning to answer my question?”

He pinched the bridge of his nose and shook his head. “Let’s just say my first council meeting as regent did not go especially smoothly.”

She grinned. “And you expected it to?”

“Well, no,” he admitted. “But it was far worse than I expected.”

He’d known from the moment he’d committed to returning to Aaltah that his would be a difficult road. In the wake of the sabotage of Aaltah’s Well and his half-­brother’s apparent death, he’d been appointed as regent to his nephew, Delnamal’s son, over the objections of nearly half the royal council. And if the infant king Tahrend had had any living male relative closer than a second cousin, Tynthanal would still be happily installed as Lord Chancellor of Women’s Well.

He sighed silently at the attempt at self-­delusion. Part of the reason he’d accepted the regency was that he’d hoped distance would ease some of the pain of not having been able to marry Chanlix. Seeing her every day had been misery—­for both of them—­and he imagined the pain would only grow sharper when the babe was born.

“How so?” Kailee tilted her head curiously, and he realized his original plan to spare her his turmoil had been misguided. Their marriage might be a sham, but she was wise beyond her years, and if he could only stop mooning hopelessly over Chanlix, he suspected they could become true friends. Surely he could give her that much.

“Let’s just say that there is a palpable lack of enthusiasm about my regency. No one came right out and said it, but I was given the distinct impression that my continued service in that capacity is dependent on my ability to fix whatever is wrong with our Well.”

“So have you been down to the Well?”

“Yes. The grand magus took me down right after the meeting. He’s also offered to train me as a spell crafter in my ‘spare time.’ ” He laughed grimly. “I understand why everyone hopes I can help, but it would take years for me to fully master the art of spell crafting, and I very much doubt I will be allowed years before people demand results.”

No one knew exactly what had happened when King Delnamal took the Abbess of Khalpar to Aaltah’s Well, but whatever it was had cost them more than their lives. Large portions of the cavern in which the Well resided had collapsed, leaving a substantial pile of rubble that would be weeks in the clearing. But worse than that . . .

“The Well is clearly damaged,” he said with a shake of his head. “I’ve been to the Well many times in my life and know exactly how many elements should be spilling out of it. I’d estimate the flow is a little more than half what it used to be, and I have no idea why.”

“You don’t think the rubble explains it?”

He shook his head. “Certainly that’s what the council would like to think, but . . . I’m not so sure. I guess we won’t know until it’s all cleared, though the grand magus tells me there’s been no improvement that he can discern from what has already been cleared. I find that less than promising. If we can’t restore it to its previous state, then it won’t be long before we start running low on some of the rarer elements, and that may make it difficult for us to fulfill our trade agreements.”

Kailee chewed her lip anxiously. “I would like to see it myself,” she said, and though it was subtle, he saw how she tensed in anticipation of refusal.

It made him ashamed of his first impulse, which was not to refuse, but to try to talk her out of it. She’d made it clear that one of the reasons she’d come with him to Aaltah instead of staying in the comfort and security of Women’s Well was that she hoped to clear Mairahsol’s name. Everyone was sure the late Abbess of Khalpar was behind whatever evil had befallen the Well. Everyone except Kailee, that is.

“I’ll take you down after supper,” he promised, “though I’m not sure it will be very informative. At present, it’s just a pile of rocks with elements leaking through the cracks.”

Tynthanal had not mentioned the troublesome reality that, so far, no bodies had been recovered from that rubble. Witnesses had seen a veiled woman—­whom everyone assumed was Mairahsol—descending the stairs to the Well, accompanied by Delnamal, his secretary, and an obviously ailing common woman. They were all presumed dead—­but if four people had died in the chamber, then why had no bodies been found?

Jenna Glass made her foray into epic fantasy with The Women's War, but she wrote her first book—an “autobiography”—when she was in the fifth grade. She began writing in earnest while in college and proceeded to collect a dizzying array of rejections for her first seventeen novels. Nevertheless, she persisted, and her eighteenth novel became her first commercial sale. Within a few years, Glass became a full-time writer, and she has never looked back. She has published more than twenty novels under various names. 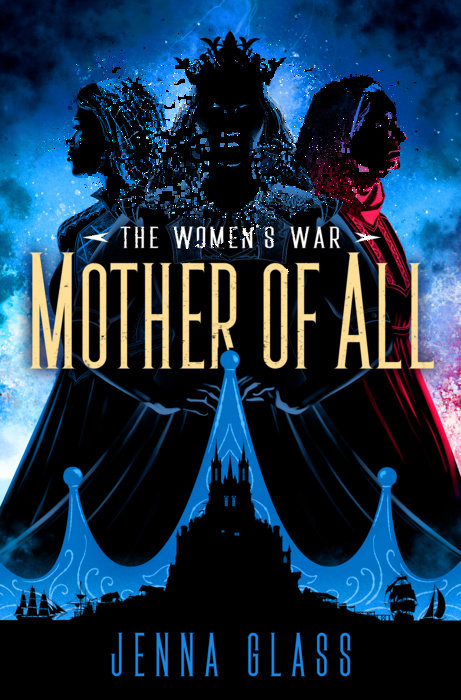