A Pulitzer Prize–winning New York Times reporter exposes the roots of the opioid epidemic at the hands of Purdue Pharma and Raymond and Mortimer Sackler in Pain Killer, a “timely, compelling, important” (The Seattle Times) story of corporate greed and government negligence.

“Groundbreaking . . . Pain Killer is the shocking account of the origins of today’s opioid epidemic, the creators of this plague, and the way to help stop it.”—Sam Quinones, author of Dreamland: The True Tale of America’s Opiate Epidemic

Between 1999 and 2017, an estimated 250,000 Americans died from overdoses involving prescription painkillers, a plague ignited by Purdue Pharma’s aggressive marketing of OxyContin. Families, working class and wealthy, have been torn apart, businesses destroyed, and public officials pushed to the brink. Meanwhile, the drugmaker’s owners, Raymond and Mortimer Sackler, whose names adorn museums worldwide, made enormous fortunes from the commercial success of OxyContin.

In Pain Killer, Barry Meier tells the story of how Purdue turned OxyContin into a billion-dollar blockbuster. Powerful narcotic painkillers, or opioids, were once used as drugs of last resort for pain sufferers. But Purdue launched an unprecedented marketing campaign claiming that the drug’s long-acting formulation made it safer to use than traditional painkillers for many types of pain. That illusion was quickly shattered as drug abusers learned that crushing an Oxy could release its narcotic payload all at once. Even in its prescribed form, Oxy proved fiercely addictive. As OxyContin’s use and abuse grew, Purdue concealed what it knew from regulators, doctors, and patients.

Here are the people who profited from the crisis and those who paid the price, those who plotted in boardrooms and those who tried to sound alarm bells. A country doctor in rural Virginia, Art Van Zee, took on Purdue and warned officials about OxyContin abuse. An ebullient high school cheerleader, Lindsey Myers, was reduced to stealing from her parents to feed her escalating Oxy habit. A hard-charging DEA official, Laura Nagel, tried to hold Purdue executives to account.

In this updated edition of Pain Killer, Barry Meier breaks new ground in his decades-long investigation into the opioid epidemic. He takes readers inside Purdue to show how long the company withheld information about the abuse of OxyContin and gives a shocking account of the Justice Department’s failure to alter the trajectory of the opioid epidemic and protect thousands of lives. Equal parts crime thriller, medical detective story, and business exposé, Pain Killer is a hard-hitting look at how a supposed wonder drug became the gateway drug to a national tragedy.

An excerpt from Pain Killer

PROLOGUE
Book of the Dead

Within a span of thirty-six hours in Philadelphia, nine bodies had been found just blocks away from one another. Five were inside homes. Two were in cars. Two were on the street. The oldest of them was forty-two. The youngest was twenty-four.

They had names but they would soon become statistics, data points consumed by a tidal wave of fatal drug overdoses sweep­ing across the United States. In 2016, 64,000 Americans died from drug overdoses. That number equals the population of cit­ies such as Portland, Maine; Lynchburg, Virginia; and Santa Fe, New Mexico. It was as if, in one year, a plague had entered one of these towns and killed every single inhabitant. On an average day in 2016, 175 people died of an overdose, a rate of seven fa­talities an hour. Nine deaths in thirty-six hours wasn’t unusual.

Bodies were piling up too fast in some places for medical ex­aminers and coroners to keep up. Morgues were filled to capac­ity, and corpses had to be stored for days in rented refrigerated tractor-trailers until space became available. Many of the dead were not autopsied. It is standard procedure in a drug-overdose case to conduct an autopsy. But even if medical examiners had had time to autopsy every victim, some stopped themselves from doing so. Professional groups that accredit medical examiners set a limit on the number of autopsies that a doctor can compe­tently perform in a year, and examiners in areas with large num­bers of overdose deaths would have exceeded that number and risked losing their accreditation. As a result, when overdose vic­tims were discovered near hypodermic needles or pill bottles, they went straight to their graves, unexamined. The vast major­ity of these deaths—42,000 of them in 2016—involved “opioids,” prescription painkillers or illegal drugs derived from compounds either found in the opium poppy or synthesized in a lab.

The opioid crisis has become woven into the fabric of every­day American life. In hospitals, newborns, separated from the narcotics coursing through the bloodstream of their addicted mothers, enter the world writhing in the pain of opioid with­drawal. On the streets, police officers carry a new piece of stan­dard equipment, a nasal spray containing medicine that could save the life of a person in the midst of an overdose. The epi­demic’s impact has been so pervasive that life expectancy among white men in the United States has started falling for the first time in more than twenty years.

Public officials have called for a dramatic response. President Donald J. Trump appointed a White House panel to propose so­lutions. Lawmakers urged that tens of billions of dollars be spent to treat the addicted. Newspapers, magazines, and television programs are filled with reports about the havoc caused in com­munities large and small.

All this attention makes it seem as if something new is hap­pening. That’s not the case. The recent appearance of counterfeit versions of a particularly potent synthetic opioid, fentanyl, has driven up the body count. But by 2017, over 200,000 Americans had died during the two preceding decades from overdoses in­volving legal drugs that were produced by pharmaceutical com­panies and prescribed by doctors.

People have long been sounding alarms about the mounting death toll linked to prescription painkillers. Still, year after year, politicians, lawmakers, public regulators, professional medical organizations, and insurers have neglected the growing carnage while the pharmaceutical industry has downplayed it. The result is tragic and predictable. By 2016, the number of overdose deaths involving prescription opioids had quadrupled since 1999. A disaster that might have been contained with an early response had morphed into a hydra.

Every catastrophe, natural or man-made, has a beginning. For the opioid crisis, the seed was a drug called OxyContin. When OxyContin first appeared in the mid-1990s, it was her­alded as a “wonder” drug that would change how pain, man­kind’s oldest and most persistent medical enemy, was treated. A determined band of activists laid the groundwork for its arrival by arguing that millions of people were suffering unnecessarily because doctors had exaggerated fears about the addictive po­tential of prescription painkillers. Doctors had used the term “narcotic” to describe the active ingredients in such medica­tions. But advocates of more-aggressive pain treatment were so eager to distance drugs like OxyContin from the back-alley con­notations of “narcotic” that they coined the word “opioid” to re­brand them.

OxyContin became the centerpiece of the most aggressive marketing campaign for a powerful and potentially addicting narcotic ever undertaken by the pharmaceutical industry. Its producer, Purdue Pharma, showered millions of dollars on doc­tors to convince them to prescribe OxyContin and claimed that it offered not only a better way to treat pain but a safer one as well. Purdue, which was owned by one of America’s wealthiest and most secretive families, the Sacklers, would make billions from the drug’s sales.

When this book was first published, in 2003, many of the crit­ical events chronicled in this new and expanded edition had yet to take place. For instance, in 2007, Purdue and three of its top executives pled guilty to criminal charges in connection with the company’s marketing of OxyContin.

With the case’s end, I thought my involvement in the story was over. I also labored under the misconception, as journalists often do, that when one stops reporting on a story the story stops. Unfortunately, that has not proven to be the case. If any­thing, the OxyContin episode spawned an era of chaos, corpo­rate profiteering, political entropy, and misery, some of which might have been prevented by federal officials. Following the plea agreements with Purdue and its officials, the Justice Depart­ment consigned to secrecy evidence its own investigators had uncovered about when Purdue first learned about OxyContin’s abuse and what the company did with this crucial information. After a decade in obscurity, scores of internal Purdue emails and other records unearthed by investigators are finally available to shed new light on the origin story of the opioid crisis. OxyContin was not a “wonder” drug. It was the gateway drug to the most devastating public-health disaster of the twenty-first century.

Barry Meier is a Pulitzer Prize-nominated investigative reporter for the New York Times and a 2002 recipient of a George Polk Award for outstanding journalism. He lives in New York City with his wife and daughter. 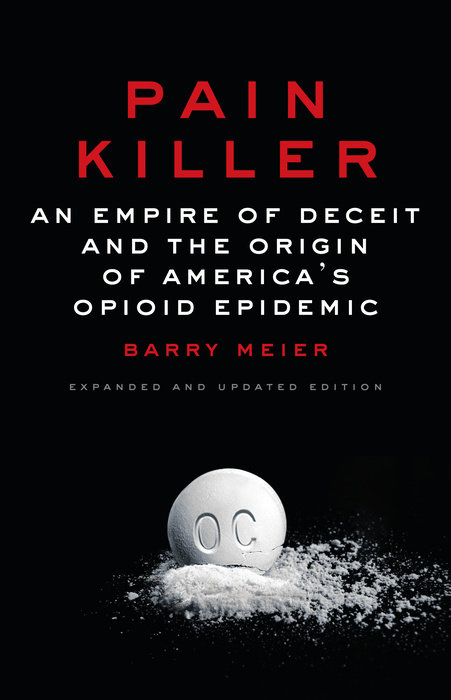