NEW YORK TIMES BESTSELLER • OVER ONE MILLION COPIES SOLD! A gripping novel about the whirlwind rise of an iconic 1970s rock group and their beautiful lead singer, revealing the mystery behind their infamous breakup—from the author of The Seven Husbands of Evelyn Hugo, Malibu Rising, and Carrie Soto Is Back

“An explosive, dynamite, down-and-dirty look at a fictional rock band told in an interview style that gives it irresistible surface energy.”—Elin Hilderbrand

Everyone knows DAISY JONES & THE SIX, but nobody knows the reason behind their split at the absolute height of their popularity . . . until now.

Daisy is a girl coming of age in L.A. in the late sixties, sneaking into clubs on the Sunset Strip, sleeping with rock stars, and dreaming of singing at the Whisky a Go Go. The sex and drugs are thrilling, but it’s the rock ’n’ roll she loves most. By the time she’s twenty, her voice is getting noticed, and she has the kind of heedless beauty that makes people do crazy things.

Also getting noticed is The Six, a band led by the brooding Billy Dunne. On the eve of their first tour, his girlfriend Camila finds out she’s pregnant, and with the pressure of impending fatherhood and fame, Billy goes a little wild on the road.

Daisy and Billy cross paths when a producer realizes that the key to supercharged success is to put the two together. What happens next will become the stuff of legend.

The making of that legend is chronicled in this riveting and unforgettable novel, written as an oral history of one of the biggest bands of the seventies. Taylor Jenkins Reid is a talented writer who takes her work to a new level with Daisy Jones & The Six, brilliantly capturing a place and time in an utterly distinctive voice.

An excerpt from Daisy Jones & The Six (TV Tie-in Edition)

Daisy Jones was born in 1951 and grew up in the Hollywood Hills of Los Angeles, California. The daughter of Frank Jones, the well-­known British painter, and Jeanne LeFevre, a French model, Daisy started to make a name for herself in the late sixties as a young teenager on the Sunset Strip.

Elaine Chang (biographer, author of Daisy Jones: Wild Flower): Here is what is so captivating about Daisy Jones even before she was “Daisy Jones.”

You’ve got a rich white girl, growing up in L.A. She’s gorgeous—­even as a child. She has these stunning big blue eyes—­dark, cobalt blue. One of my favorite anecdotes about her is that in the eighties a colored-­contact company actually created a shade called Daisy Blue. She’s got copper-red hair that is thick and wavy and . . . takes up so much space. And then her cheekbones almost seem swollen, that’s how defined they are. And she’s got an incredible voice that she doesn’t cultivate, never takes a lesson. She’s born with all the money in the world, access to whatever she wants—­artists, drugs, clubs—­anything and everything at her disposal.

But she has no one. No siblings, no extended family in Los Angeles. Two parents who are so into their own world that they are all but indifferent to her existence. Although, they never shy away from making her pose for their artist friends. That’s why there are so many paintings and photos of Daisy as a child—­the artists that came into that home saw Daisy Jones, saw how gorgeous she was, and wanted to capture her. It’s telling that there is no Frank Jones piece of Daisy. Her father is too busy with his male nudes to pay much attention to his daughter. And in general, Daisy spends her childhood rather alone.

But she’s actually a very gregarious, outgoing kid—­Daisy would often ask to get her hair cut just because she loved her hairdresser, she would ask neighbors if she could walk their dogs, there was even a family joke about the time Daisy tried to bake a birthday cake for the mailman. So this is a girl that desperately wants to connect. But there’s no one in her life who is truly interested in who she is, especially not her parents. And it really breaks her. But it is also how she grows up to become an icon.

We love broken, beautiful people. And it doesn’t get much more obviously broken and more classically beautiful than Daisy Jones.

So it makes sense that Daisy starts to find herself on the Sunset Strip. This glamorous, seedy place.

Daisy Jones (singer, Daisy Jones & The Six): I could walk down to the Strip from my house. I was about fourteen, sick of being stuck in the house, just looking for something to do. I wasn’t old enough to get into any of the bars and clubs but I went anyway.

I remember bumming a cigarette off of a roadie for the Byrds when I was pretty young. I learned quickly that people thought you were older if you didn’t wear your bra. And sometimes I’d wear a bandanna headband like the cool girls had on. I wanted to fit in with the groupies on the sidewalk, with their joints and their flasks and all of that.

So I bummed a cigarette from this roadie outside the Whisky a Go Go one night—­the first time I’d ever had one and I tried to pretend I did it all the time. I held the cough in my throat and what have you—­and I was flirting with him the best I could. I’m embarrassed to think about it now, how clumsy I probably was.

But eventually, some guy comes up to the roadie and says, “We gotta get inside and set up the amps.” And he turns to me and says, “You coming?” And that’s how I snuck into the Whisky for the first time.

I stayed out that night until three or four in the morning. I’d never done anything like that before. But suddenly it was like I existed. I was a part of something. I went from zero to sixty that night. I was drinking and smoking anything anybody would give me.

When I got home, I walked in through the front door, drunk and stoned, and crashed in my bed. I’m pretty sure my parents never even noticed I was gone.

I got up, went out the next night, did the same thing.

Eventually, the bouncers on the Strip recognized me and let me in wherever I was going. The Whisky, London Fog, the Riot House. No one cared how young I was.

Greg McGuinness (former concierge, the Continental Hyatt House): Ah, man, I don’t know how long Daisy was hanging around the Hyatt House before I noticed her. But I remember the first time I saw her. I was on the phone and in walks this crazy tall, crazy skinny girl with these bangs. And the biggest, roundest blue eyes you ever saw in your life, man. She also had this smile. Huge smile. She came in on the arm of some guy. I don’t remember who.

A lot of the girls around the Strip back then, I mean, they were young, but they tried to seem older. Daisy just was, though. Didn’t seem like she was trying to be anything. Except herself.

After that, I noticed she was at the hotel a lot. She was always laughing. There was nothing jaded about her, ’least when I knew her. It was like watching Bambi learn how to walk. She was real naïve and real vulnerable but you could tell there was something about her.

I was nervous for her, tell you the truth. There were so many men in the scene that were . . . into young girls. Thirty-­something rock stars sleeping with teenagers. Not saying it was okay, just saying that’s how it was. How old was Lori Mattix when she was with Jimmy Page? Fourteen? And Iggy Pop and Sable Starr? He sang about it, man. He was bragging about it.

When it came to Daisy—­I mean, the singers, the guitarists, the roadies—­everybody was looking at her. Whenever I saw her, though, I’d try to make sure she was doing all right. I kept tabs on her here and there. I really liked her. She was just cooler than anything else happening around her.

Daisy: I learned about sex and love the hard way. That men will take what they want and feel no debt, that some people only want one piece of you.

I do think there were girls—­the Plaster Casters, some of the GTOs—­maybe they weren’t being taken advantage of, I don’t know. But it was a bad scene for me, at first.

I lost my virginity to somebody that . . . it doesn’t matter who it was. He was older, he was a drummer. We were in the lobby of the Riot House and he invited me upstairs to do some lines. He said I was the girl of his dreams.

I was drawn to him mainly because he was drawn to me. I wanted someone to single me out as something special. I was just so desperate to hold someone’s interest.

Before I knew it, we were on his bed. And he asked me if I knew what I was doing and I said yes even though the answer was no. But everyone always talked about free love and how sex was a good thing. If you were cool, if you were hip, you liked sex.

I stared at the ceiling the whole time, waiting for him to be done. I knew I was supposed to be moving around but I stayed perfectly still, scared to move. All you could hear in the room was the sound of our clothes rubbing up against the bedspread.

I had no idea what I was doing or why I was doing things I knew I didn’t want to be doing. But I’ve had a lot of therapy in my life now. And I mean a lot of therapy. And I see it now. I see myself clearly now. I wanted to be around these men—­these stars—­because I didn’t know how else to be important. And I figured I had to please them if I wanted to stay.

When he was done, he got up. And I pulled my dress down. And he said, “If you want to go back down to your friends, that’s all right.” I didn’t really have any friends. But I knew he meant I needed to leave. So I did.

He never talked to me again.

Simone Jackson (disco star): I remember seeing Daisy on the dance floor one night at the Whisky. Everybody saw her. Your eye went right to her. If the rest of the world was silver, Daisy was gold.

Simone: I brought Daisy out with me everywhere. I never had a sister.

I remember . . . It was the Sunset Strip riot, when all of us went down to Pandora’s and protested the curfew and the cops. Daisy and I went out, protested, met up with some actors and went over to Barney’s Beanery to keep partying. After that, we went back to somebody’s place. Daisy passed out on this guy’s patio. We didn’t go home until the next afternoon. She was maybe fifteen. I was probably nineteen. I just kept thinking, Doesn’t anybody care about this girl but me?

And, by the way, we were all on speed back then, even Daisy as young as she was. But if you wanted to stay skinny and be up all night, you were taking something. Mostly bennies or black beauties.

Taylor Jenkins Reid is the New York Times bestselling author of eight novels, including Carrie Soto Is Back, Malibu Rising, Daisy Jones & The Six, and The Seven Husbands of Evelyn Hugo. She lives in Los Angeles with her husband and their daughter. 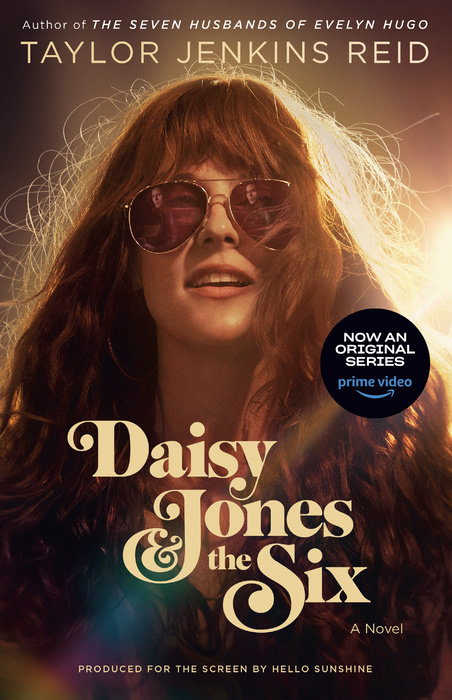