Due to circumstances within our control . . . tomorrow will be canceled.

The Eternals, the ruling class of the Future, had the power of life and death not only over every human being but over the very centuries into which they were born. Past, Present, and Future could be created or destroyed at will.

You had to be special to become an Eternal. Andrew Harlan was special. Until he committed the one unforgivable sin—falling in love.

Eternals weren’t supposed to have feelings. But Andrew could not deny the sensations that were struggling within him. He knew he could not keep this secret forever. And so he began to plan his escape, a plan that changed his own past . . . and threatened Eternity itself.

An excerpt from The End of Eternity

Andrew Harlan stepped into the kettle. Its sides were perfectly round and it fit snugly inside a vertical shaft composed of widely spaced rods that shimmered into an unseeable haze six feet above Harlan’s head. Harlan set the controls and moved the smoothly working starting lever.

The kettle did not move.

Harlan did not expect it to. He expected no movement; neither up nor down, left nor right, forth nor back. Yet the spaces between the rods had melted into a gray blankness which was solid to the touch, though nonetheless immaterial for all that. And there was the little stir in his stomach, the faint (psychosomatic?) touch of dizziness, that told him that all the kettle contained, including himself, was rushing upwhen through Eternity.

He had boarded the kettle in the 575th Century, the base of operations assigned him two years earlier. At the time the 575th had been the farthest upwhen he had ever traveled. Now he was moving upwhen to the 2456th Century.

Under ordinary circumstances he might have felt a little lost at the prospect. His native Century was in the far downwhen, the 95th Century, to be exact. The 95th was a Century stiffly restrictive of atomic power, faintly rustic, fond of natural wood as a structural material, exporters of certain types of distilled potables to nearly everywhen and importers of clover seed. Although Harlan had not been in the 95th since he entered special training and became a Cub at the age of fifteen, there was always that feeling of loss when one moved outwhen from “home.” At the 2456th he would be nearly two hundred forty millennia from his birthwhen and that is a sizable distance even for a hardened Eternal.

Under ordinary circumstances all this would be so.

But right now Harlan was in poor mood to think of anything but the fact that his documents were heavy in his pocket and his plan heavy on his heart. He was a little frightened, a little tense, a little confused.

It was his hands acting by themselves that brought the kettle to the proper halt at the proper Century.

Strange that a Technician should feel tense or nervous about anything. What was it that Educator Yarrow had once said:

“Above all, a Technician must be dispassionate. The Reality Change he initiates may affect the lives of as many as fifty billion people. A million or more of these may be so drastically affected as to be considered new individuals. Under these conditions, an emotional make-up is a distinct handicap.”

Harlan put the memory of his teacher’s dry voice out of his mind with an almost savage shake of his head. In those days he had never imagined that he himself would have the peculiar talent for that very position. But emotion had come upon him after all. Not for fifty billion people. What in Time did he care for fifty billion people? There was just one. One person.

He became aware that the kettle was stationary and with the merest pause to pull his thoughts together, put himself into the cold, impersonal frame of mind a Technician must have, he stepped out. The kettle he left, of course, was not the same as the one he had boarded, in the sense that it was not composed of the same atoms. He did not worry about that any more than any Eternal would. To concern oneself with the mystique of Time-travel, rather than with the simple fact of it, was the mark of the Cub and newcomer to Eternity.

He paused again at the infinitely thin curtain of non-Space and non-Time which separated him from Eternity in one way and from ordinary Time in another.

This would be a completely new section of Eternity for him. He knew about it in a rough way, of course, having checked upon it in the Temporal Handbook. Still, there was no substitute for actual appearance and he steeled himself for the initial shock of adjustment.

He adjusted the controls, a simple matter in passing into Eternity (and a very complicated one in passing into Time, a type of passage which was correspondingly less frequent). He stepped through the curtain and found himself squinting at the brilliance. Automatically he threw up his hand to shield his eyes.

Only one man faced him. At first Harlan could see him only blurrily.

The man said, “I am Sociologist Kantor Voy. I imagine you are Technician Harlan.”

Voy looked about and said tolerantly, “You mean the molecular films?”

“I certainly do,” said Harlan. The Handbook had mentioned them, but had said nothing of such an insane riot of light reflection.

Harlan felt his annoyance to be quite reasonable. The 2456th Century was matter-oriented, as most Centuries were, so he had a right to expect a basic compatibility from the very beginning. It would have none of the utter confusion (for anyone born matter-oriented) of the energy vortices of the 300’s, or the field dynamics of the 600’s. In the 2456th, to the average Eternal’s comfort, matter was used for everything from walls to tacks.

To be sure, there was matter and matter. A member of an energy-oriented Century might not realize that. To him all matter might seem minor variations on the theme that was gross, heavy, and barbaric. To matter-oriented Harlan, however, there was wood, metal (subdivisions, heavy and light), plastic, silicates, concrete, leather, and so on.

But matter consisting entirely of mirrors!

That was his first impression of the 2456th. Every surface reflected and glinted light. Everywhere was the illusion of complete smoothness; the effect of a molecular film. And in the ever-repeated reflection of himself, of Sociologist Voy, of everything he could see, in scraps and wholes, in all angles, there was confusion. Garish confusion and nausea!

“I’m sorry,” said Voy, “it’s the custom of the Century, and the Section assigned to it finds it good practice to adopt the customs where practical. You get used to it after a time.”

Voy walked rapidly upon the moving feet of another Voy, upside down beneath the floor, who matched him stride for stride. He reached to move a hair-contact indicator down a spiral scale to point of origin.

Harlan followed through empty corridors that, Harlan knew, must moments ago have been a riot of made light and reflection, up a ramp, through an anteroom, into an office.

In all the short journey no human being had been visible. Harlan was so used to that, took it so for granted, that he would have been surprised, almost shocked, if a glimpse of a human figure hurrying away had caught his eyes. No doubt the news had spread that a Technician was coming through. Even Voy kept his distance and when, accidentally, Harlan’s hand had brushed Voy’s sleeve, Voy shrank away with a visible start.

Harlan was faintly surprised at the touch of bitterness he felt at this. He had thought the shell he had grown about his soul was thicker, more efficiently insensitive than that. If he was wrong, if his shell had worn thinner, there could only be one reason for that.

Sociologist Kantor Voy leaned forward toward the Technician in what seemed a friendly enough fashion, but Harlan noted automatically that they were seated on opposite sides of the long axis of a fairly large table.

Voy said, “I am pleased to have a Technician of your reputation interest himself in our little problem here.”

“Yes,” said Harlan with the cold impersonality people would expect of him. “It has its points of interest.” (Was he impersonal enough? Surely his real motives must be apparent, his guilt be spelled out in beads of sweat on his forehead.)

He removed from an inner pocket the foiled summary of the projected Reality Change. It was the very copy which had been sent to the Allwhen Council a month earlier. Through his relationship with Senior Computer Twissell (the Twissell, himself) Harlan had had little trouble in getting his hands on it.

Before unrolling the foil, letting it peel off onto the table top where it would be held by a soft paramagnetic field, Harlan paused a split moment.

The molecular film that covered the table was subdued but was not zero. The motion of his arm fixed his eye and for an instant the reflection of his own face seemed to stare somberly up at him from the tabletop. He was thirty-two, but he looked older. He needed no one to tell him that. It might be partly his long face and dark eyebrows over darker eyes that gave him the lowering expression and cold glare associated with the caricature of the Technician in the minds of all Eternals. It might be just his own realization that he was a Technician.

But then he flicked the foil out across the table and turned to the matter at hand.

“I am not a Sociologist, sir.”

Voy smiled. “That sounds formidable. When one begins by expressing lack of competence in a given field, it usually implies that a flat opinion in that field will follow almost immediately.”

“No,” said Harlan, “not an opinion. Just a request. I wonder if you won’t look over this summary and see if you haven’t made a small mistake somewhere here.”

Voy looked instantly grave. “I hope not,” he said. 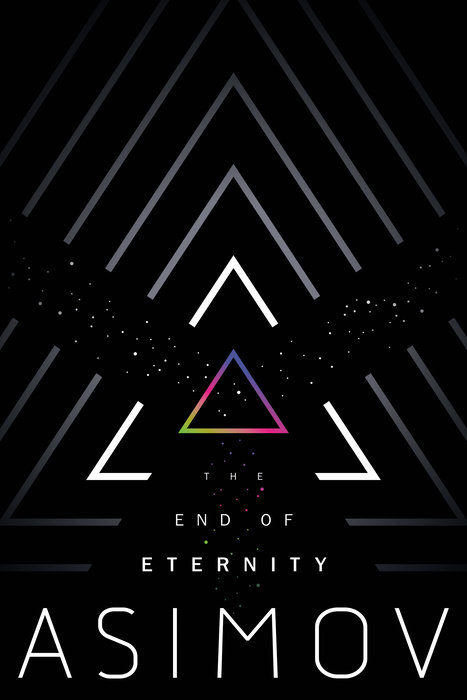