NEW YORK TIMES EDITORS’ CHOICE • A witty, moving, piercingly insightful new novel about a marvelously complicated woman who can’t be anyone but herself, from the award-winning author of Chemistry

“A deeply felt portrait . . . With gimlet-eyed observation laced with darkly biting wit, Weike Wang masterfully probes the existential uncertainty of being other in America.”—Celeste Ng, author of Little Fires Everywhere

Joan is a thirtysomething ICU doctor at a busy New York City hospital. The daughter of Chinese parents who came to the United States to secure the American dream for their children, Joan is intensely devoted to her work, happily solitary, successful. She does look up sometimes and wonder where her true roots lie: at the hospital, where her white coat makes her feel needed, or with her family, who try to shape her life by their own cultural and social expectations.

Once Joan and her brother, Fang, were established in their careers, her parents moved back to China, hoping to spend the rest of their lives in their homeland. But when Joan’s father suddenly dies and her mother returns to America to reconnect with her children, a series of events sends Joan spiraling out of her comfort zone just as her hospital, her city, and the world are forced to reckon with a health crisis more devastating than anyone could have imagined.

Deceptively spare yet quietly powerful, laced with sharp humor, Joan Is Okay touches on matters that feel deeply resonant: being Chinese-American right now; working in medicine at a high-stakes time; finding one’s voice within a dominant culture; being a woman in a male-dominated workplace; and staying independent within a tight-knit family. But above all, it’s a portrait of one remarkable woman so surprising that you can’t get her out of your head.

An excerpt from Joan Is Okay

When I think about people, I think about space, how much space a person takes up and how much use that person provides. I am just under five feet tall and just under a hundred pounds. Briefly I thought I would exceed five feet, and while that would’ve been fine, I also didn’t need the extra height. To stay just under something gives me a sense of comfort, as when it rains and I can open an umbrella over my head.

Today someone said that I looked like a mouse. Five six and 290 pounds, he, in a backless gown with nonslip tube socks, said that my looking like a mouse made him wary. He asked how old I was. What schools had I gone to, and were they prestigious? Then where were my degrees from these prestigious schools?

My degrees are large and framed, I said. I don’t carry them around.

While not a mouse, I do have prosaic features. My eyes, hooded and lashless. I have very thin eyebrows.

I told the man that he could try another hospital or come back at another time. But high chance that I would still be here and he would still think that I looked like a mouse.

I read somewhere that empathy is repeating the last three words of a sentence and nodding your head.

My twenties were spent in school, and a girl in her twenties is said to be in her prime. After that decade, all is lost. They must mean looks, because what could a female brain be worth, and how long could one last?

Being in school often felt like a race. I was told to grab time and if I didn’t—­that is, reach out the window and pull time in like a messenger dove—­someone else in another car would. The road was full of cars, limousines, and Priuses, but there were a limited number of doves. With this image in mind, I can no longer ride in a vehicle with the windows down. Inevitably I will look for the dove and offer my hand out to be cut off.

My father’s stroke was fatal, having followed the natural course of a stroke of that magnitude to its predictable end. Usually people die from complications and I was grateful he hadn’t. Complications would’ve angered him, actually, to have died not from a single blow but from a total system shutdown, which was slower, more painful, and revealed just how vulnerable a person could be. Months prior, he had complained of headaches and eye pressure. I told him to get some tests done and he said that he would, which meant he wouldn’t. In China, my father ran a construction company that, in the last decade, had finally seen success. He was a typical workaholic and for most of my childhood, adolescence, adulthood, not often around.

When I got the news, I was in my office at the hospital, at work. My father had tripped over a bundle of projector cords during a meeting and bounced his head off a chair. As my mother was explaining—­either the fall triggered the stroke or the stroke triggered the fall—­I asked her to put the phone next to his ear. He was already unconscious, but hearing is the last sense to go. Given the time difference on my side, only morning in Manhattan since I was twelve hours behind, my father was still en route to the meeting that by my mother’s accounts was meant to be ordinary.

I asked my father how his drive was going and if he could, just for today, take a few hours off. He obviously didn’t reply, but I said either way this went, I was proud of him. He had never planned to retire and remained, until the very end, doing what he loved.

Chuàng, I said into the phone, and raised my fist into the air.

After my mother hung up, I sat there for a while, not facing the computer, and that was my mistake.

Having seen my fist go up, the two other doctors in the office asked whom I’d been talking to and what was that strange sound I just made. I said my father and that the sound was closer to a word but the word meant nothing.

My colleagues didn’t know I spoke Chinese, and I wanted to keep it that way to avoid any confusion. But the word did mean something, it had many different definitions, one of which was “to begin.”

It was late September, and my female colleague Madeline was teasing my male colleague Reese about summer, which was his favorite season so he was sad to see it go.

Reese was a six-­two, 190-­pound all-­American guy who went on casual dates with lots of women but flirted with only Madeline at work. I’m madly in love with you, he would say to her, in front of other colleagues like me, and Madeline would either ignore him completely or relentlessly try to get him back. Madeline was a five-­seven, 139-­pound robust German woman with a slight accent. She has had the same software engineer boyfriend for seven years, and they lived in an apartment with lots of plants.

What’s wrong? Madeline asked, sensing that I had been turned away from my monitor for too long.

I asked if one of them could cover my weekend shift. I apologized for the short notice, but I had to leave.

Both were happy to do it and even commended my request, since like my father I was a workaholic and known to never take time off. They asked where I was going and I said China, but just for the weekend. Then I turned from them and started packing up my things.

I know what it is, Madeline said with a mischievous glint. You’re off to get married. You’re going to elope.

Elope is a funny word and, in hospital-­speak for patients, meant “to leave the building at the risk of yourself and without a doctor’s consent.”

After I mentioned my father’s passing, Madeline gasped, covering her mouth and, for a second, shutting her eyes. Through her fingers, she asked if that had been my last conversation with him, and the sound I made, was it, then, a sound of grief?

I said, No, not really, and left it at that.

Reese and Madeline asked me a few more questions, like when I last saw him, and how long has it been since I left China?

You were born there, no? Reese asked, and I said I was born in the Bay Area.

California, Madeline said. A great place to be born.

But Oakland, I said, to not seem like I was giving my birthplace too much credit.

I told them that the last time I saw my father was in spring. He had been in New York for business, a possible opportunity here, a new client, and, on his way back to JFK, drove past the hospital and met me in its first-­floor atrium that had fake greenery and a small café. He bought me a cup of coffee and I was almost done with it when he had to leave and catch his flight. But to China, I rarely went, nor did I consider myself too Chinese.

The moment those words left my mouth, I wondered why I had said them. What was wrong with being too Chinese? Yet it’d always seemed that something was.

I felt a draft but that was impossible. Our shared office was a windowless room with a dozen desks lined up against the walls and a refreshments station in the back. The door opened to a hall that had no open windows and was used only to transport equipment. A folded-­up wheelchair, an empty bed, pushed by hunched-­over techs.

Madeline asked if I wanted some gum and it seemed we all did, so we passed the gum packet around and discussed the fresh minty flavor. She asked if I wanted the rest of the pack, international flights were long. How long exactly?

I said sixteen hours, to which Reese replied shit.

I was surprised that neither asked where in China I was going. The country was huge and much of it rural. Google Maps didn’t work there. But there were only two cities most people knew about, and I was going not to the capital but the other one by the sea.

Weike Wang is a graduate of Harvard University, where she earned her undergraduate degree in chemistry and her doctorate in public health. She received her MFA from Boston University. Her fiction has been published in literary magazines, including Alaska Quarterly Review, Glimmer Train, and Ploughshares, which also named Chemistry the winner of its John C. Zacharis Award. A “5 Under 35” honoree of the National Book Foundation, Weike currently lives in New York City. 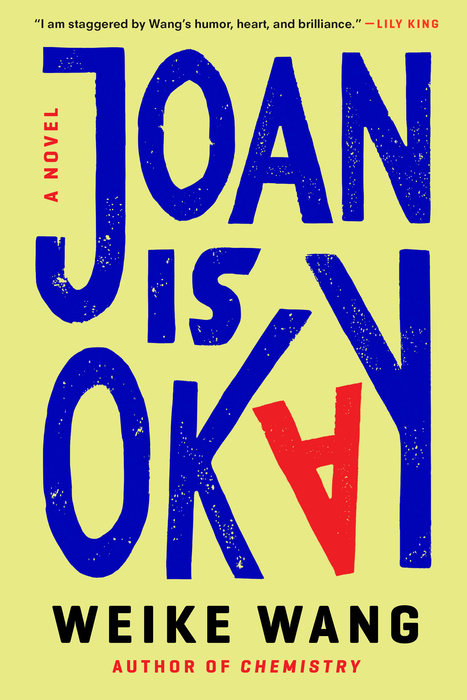