An overwhelmed new mom discovers unexpected parallels between life in twenty-first-century America and her grandmother’s account of their family’s escape from the Nazis in this sharp, heartfelt novel.

“A fresh perspective—one that’s both haunting and hilarious—on dual-timeline war stories, a feat that only a writer of Kuznetsova’s caliber could pull off.”—Fiona Davis, New York Times bestselling author of The Lions of Fifth Avenue

Larissa is a stubborn, brutally honest woman in her eighties, tired of her home in Kiev, Ukraine—tired of everything really, except for her beloved granddaughter, Natasha. Natasha is tired as well, but that’s because she just had a baby, and she’s struggling to balance her roles as a new mother, a wife, a struggling actress, and a host to her husband’s slacker best friend, Stas, who has been staying with them in their cramped one-bedroom apartment in upper Manhattan.

When Natasha asks Larissa to tell the story of her family’s Soviet wartime escape from the Nazis in Kiev, she reluctantly agrees. Maybe Natasha is just looking for distraction from her own life, but Larissa is desperate to make her happy, even though telling the story makes her heart ache. Larissa recounts the nearly three-year period when she fled with her self-absorbed sister, parents, and grandmother to a factory town in the Ural Mountains where they faced starvation, a cholera outbreak, a tragic suicide, and where she was torn in her affections for two brothers from a wealthy family. But neither Larissa nor Natasha can anticipate how loudly these lessons of the past will echo in their present moments.

Something Unbelievable explores with piercing wit and tender feeling just how much our circumstances shape our lives and what we pass on to the younger generations, willingly or not.

An excerpt from Something Unbelievable

My granddaughter, Natasha, has a long history of caring for unfortunate creatures. When she was a little girl, a recent transplant to America, she and her father would rescue endless varieties of pathetic fauna from the woods behind their dilapidated New Jerseyan duplex—­broken-­winged birds and feeble rabbits and one-­eyed kittens that they would fail to nurse back to health until their dim flames were nearly extinguished. Whenever I visited from Kiev, I would try to put a stop to this nonsense, of course. Natasha’s mother and I would take the pitiful creatures to the backyard and put them out of their misery with a frying pan under cover of night. Oh, her mother, Valentina, was a force, a stunning, steely woman with a vicious gleam in her eye as she wiped the bloody pan on the grass, wanting to harden her daughter against the cold world. But what can you do, she died of breast cancer when Natasha was seventeen, leaving her alone with my hapless son, so the girl has remained as soft as a whore’s bottom.

When my son was felled by a heart attack five years ago and handsome Yuri, his former student, began courting Natasha, I thought finally, finally, she will settle down, stop caring for useless men, and have someone care for her. And last year, when she told me she and Yuri were expecting a child, I thought, Well, yes, she will have to make some compromises with her acting career, but she will be a natural! I recalled her rapturous, Madonna-­like gaze when she beheld her ailing creatures, and later, the slew of stinky pets she took into her various cramped New York apartments, and I thought, She has my simpleton sister’s animal-­caretaking genes; she’ll also love holding a crying nothing to her breast, much more than I did anyway. But when she first materialized on my computer screen with the rat-­faced girl in her arms, she looked weary and ruined and sweat­covered, shaking my faith in her abilities. She has spent most of the three months since her daughter’s birth chained to her infant and lately, also caring for Stas, Yuri’s overly young, greasy-haired deadbeat of a friend who fled the Boston suburb where they were raised under murky circumstances, whom she was kind enough to take in.

When I see her this evening, her pale skin emerging in the morning light of her living room, her dark eyes swollen and sleepless, she brings to mind a clump of hair I yanked out of my shower drain just last week. She is holding her hideous baby girl, Talia, stroking her cheek in hopes that she will drift off.

“Now, listen, child,” I say. “If you train that girl to sleep in your arms, she will become a mother-dependent namby-­pamby. You should do what my parents did to me, and what I did to your father. Put her in her crib until she is filled with existential understanding. She will see that she is all alone in a cold universe and must drift off on her own. And while she’s in there, you should leave the apartment and go for a stroll or see a movie.”

She laughs and shakes her wilted head. “I’ll consider it.”

“Some would call that child abuse,” says Stas from a dark corner of the apartment. Lately, his presence has been as reliable as that of Sharik, Natasha’s vulgar orange cat.

“Oh please,” I tell him. “Everyone did it in the Soviet Union, and we raised a generation of strong men.”

“Strong alcoholics,” I concede. “Don’t you have somewhere to be?”

“Not at all,” he says, approaching the computer to give me a slick little smile, and I shake my head at Natasha for not telling this pesky creature to leave.

She turns to the derelict boy at last. “Why don’t you go take that stroll my grandmother was talking about?”

“Fine, fine,” he says, lifting a grubby hand at me, and soon enough the door slams shut. Natasha watches him go and then fusses with the quilt on her worn green leather couch and then the threadbare garage sale rug on the floor with her free hand, a desperate attempt to create order. When her gaze returns to me, she looks even more out of sorts.

“Listen,” she says, “there’s something I wanted to ask you.”

“Oh dear,” I say, and I feel nervous all of a sudden, though what could she possibly want from me? Could she be asking for money at last?

“Don’t freak out,” she says, but she does nothing to calm me down. “But I was wondering—­would you mind telling me the story of how your grandmother died during World War Two?”

I take a moment to collect myself. Why on Earth is she asking now? “Of course I can tell you,” I say. “She threw herself under a train. Then the war ended.”

“Right,” she says. “But I was wondering if you would go a bit more in-­depth? You always promised to tell me the whole story, and I thought, Tally would want to learn her history one day—­”

“And soon I will evaporate and you will have no story to remember.”

I take a drag on my cigarette and consider the days ahead. I wonder if she truly wants the story, or if she is only asking because she thinks I need more help than one of her mangled rabbits, a distraction to keep the abyss at bay. I have told her bits and pieces of the story over the years, but never from start to finish, because the girl has the attention span of a ferret and because talking about the war for too long wears at my heart. But what else do I have to live for?

Old isn’t gold—­I am approaching my ninetieth brutal year and wouldn’t mind being clubbed over the head with a frying pan myself. A season has passed since I buried my husband and the days are long. My body is betraying me and my dear Kiev is of no use to me now. Seeing it in its early summer glory without having the able body to enjoy its lush gardens and verdant parks reminds me of longing for Styopa Antonov, a graduate student and Lermontov scholar who studied under me in 1962, a charming man with the firmest buttocks whom I could not touch on account of my marriage—­well, now that I think of it, we did carry on after a while, but you get the point. So! I used to hold literary salons in my elegant home filled with obscenely youthful, lust-­crazed students arguing about whether or not Yesenin truly committed suicide and sneaking off to neck on the balcony. Now my main source of entertainment is packing up the few things I’d like to take from my apartment down to my cottage on the Black Sea, and letting my husband’s men sell the rest. Chatting with Natasha could only ease my suffering.

“Really?” she says, her bloodshot eyes lighting up in genuine surprise. “I thought it would take a bit more convincing.”

She is startled once more, caressing the limp strands on her daughter’s head. “Right now?”

“All right then,” she says.

She puts a finger to her lips and tells me to wait a second, she has to figure out how to record the call, if that’s all right with me. Then she pats her girl’s butt, and the helpless thing shuts her unknowable eyes, a creature as alien to me as a space monkey, as far away from my Kiev kitchen as a distant planet, an American-­born girl whose parents left their homeland as schoolchildren and will hardly be able to pass their Soviet legacy down to her, though they did surprise me by naming her Natalia after my mother, and now Natasha seems to think the girl will one day feel tied to her mother’s Motherland from hearing my sad story. Currently, the only Soviet thing about the child is that with the cosmically disappointed look on her face, she brings to mind Gorbachev during his resignation announcement. Well, what else is there for me to do? I wait for my pathetic little great­granddaughter to settle, and then I begin.

Maria Kuznetsova was born in Kiev, Ukraine, and moved to the United States as a child. Her first novel, Oksana, Behave!, was published in 2019. She lives in Auburn, Alabama, with her husband and daughter, where she is an assistant professor of creative writing at Auburn University. She is also a fiction editor at The Bare Life Review, a journal of immigrant and refugee literature. 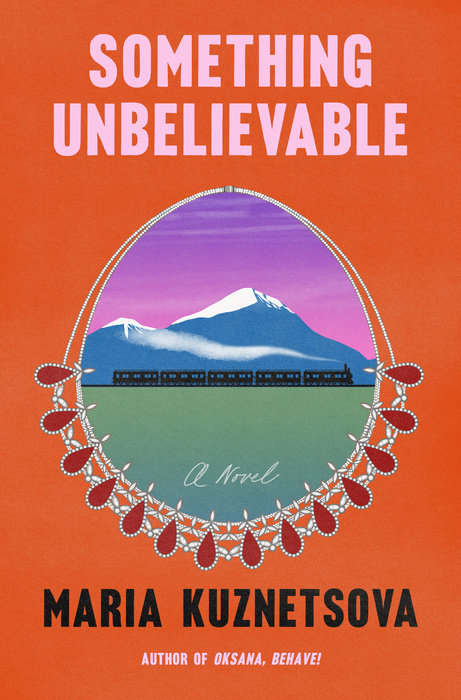