Three accomplished, globe trotting siblings in crisis take refuge in the last place they would ever expect—back home in Chicago, with one another—in this razor-sharp debut for readers of The Nest, Commonwealth, and Imagine Me Gone

The three Brennan siblings are well on their way in the world. Samantha, the youngest, is a ballerina who recently joined the ranks of a Russian dance company; her brother Jonah is a grad student studying elephants in the rainforest of Gabon; and the eldest, Gavin, has stayed closer to home, living in Los Angeles and acting in a television series.

But as the holidays draw near, all three find themselves in profoundly troubling, though distinctly different, predicaments. Samantha is losing the battle to keep her drug addiction from ruining her career; Jonah, in his attempts to protect his elephants, gets in way too deep with a gang of ivory poachers; and Gavin’s TV show is canceled the same day his girlfriend moves out.

With their lives run aground, they reunite in their parents’ home for the holidays, where they discover that the bonds between siblings are unshakable. But with their personal problems threatening to derail their nascent careers and possibly their very survival, the three embark on a trip to West Africa in a perilous attempt to right their crooked paths.

The Resolutions is a contemporary look at three young people in the defining moments of their lives, by a talented author just getting started on a promising literary career.

An excerpt from The Resolutions

She stood in a thicket of trees at the edge of campus, this place she now called home, a Russian dance company two hundred kilometers northeast of Moscow. The sun hung low in the sky, dropping with the temperature, and her toes were numb from hiking through snow. She’d been gone all afternoon, and now she was late for the dinner party, which posed a significant problem because prolonged absences didn’t go unnoticed at a place like this. Nikolai, the director of the company, presided over his dancers with the omniscience of a cult leader, and Sam knew she would need a good excuse to explain her disappearance. Unfortunately, no one was buying her excuses anymore.

Nikolai’s father was a steel oligarch who had purchased the estate as a summer retreat for his family, but then the family stopped speaking to one another so Nikolai claimed it for himself. He amassed a roster of choreographers and dancers from across the globe, and hired a team of contractors to refurbish the grounds. He erected a dozen small cottages—little two-bedroom units the dancers shared—and commissioned a famous architect to design the studio space, a three-thousand-square-foot glass cube situated amid dense conifer forest. Nikolai referred to the property as Château Oksana—named for his mother—but everyone else called it campus. Sam imagined it was the closest thing she would ever have to a proper college experience, probably not so different from those fancy private academies in New England. She slept in what was essentially a well-appointed dorm room, attended classes at a rehearsal space rather than a lecture hall, and took her meals in an upscale cafeteria. Even now, in mid-December, everything blanketed in a foot of snow, the grounds were impeccably groomed, the sidewalks brushed and cleared, the trees hung with decorative lights. There was an onsite staff to attend to the dancers’ needs, nothing more than a phone call away, yet it was a suffocating kind of luxury, like being held hostage at Versailles.

At the center of campus was the grand manor, a ten-thousand-square-foot palace that served as the social hub. She watched a procession of black SUVs unload passengers at the entrance, where Nikolai stood greeting a parade of sparkling men and women in formal attire. When he turned to kiss the cheek of an elderly, silver-haired woman, Sam made a break for it, sprinting past the rehearsal space and the gym and finally to her cottage. Once inside, she threw her coat on the bed and removed the small baggie printed with smiley faces. Restraint was not a thing she normally possessed in moments like this, but she was late and she needed to keep her head up through the party, so she stashed the baggie at the bottom of her sock drawer, a reward deferred. She moved to the bathroom and did a quick pass of makeup before slipping into a sleeveless black dress. She dabbed concealer on her forearm to mask the bruise, then looked in the mirror one last time, a woman with a question.

Can you do this?

Once a month, Nikolai threw a formal dinner party at the estate. He invited colleagues from the ballet world as well as friends from Moscow, mostly men who enjoyed mingling with the dancers. A few of the guests came for legitimate reasons, but most—the musicians, the minor celebrities, the baggy-suited hedge fund managers—came to gawk and make lewd sexual innuendos about “first position.” Sam found the events reprehensible, as if she were part of a parade of dancing prostitutes. At the last party, she poured a glass of Chianti on the head of a sweet-talking investment banker after he put his hand on her ass and whispered stunning into her ear. After the incident, Nikolai placed her on an informal probation to ensure a similar embarrassment didn’t befall another of his guests. Sam, however, made it clear to him that the best way to prevent future incidents was to instruct his guests to keep their f***ing hands to themselves.

She’d been summoned to tonight’s party to meet a new choreographer Nikolai had recruited, though most of the names he’d promised had yet to materialize so she wasn’t expecting much. The two productions the company had mounted since her arrival had been savagely reviewed, which Sam attributed to their hack choreographers, one of whom was plucked from the Russian equivalent of Dancing with the Stars. The company’s cachet had taken a blow in recent months, and Sam knew Nikolai needed a win as much as she did.

She entered the hall and scanned the crowd. Her arrival had drawn little notice and for this she felt a speck of relief. An old man was butchering Vivaldi on the piano, and tuxedoed waiters floated around the room with trays of hors d’oeuvres that appeared untouched. A few girls in tall heels and short dresses were huddled at the bar, cocktails in hand, chatting in a language she’d made no attempt to learn. She looked around the room: the crystal chandelier hanging from a forty-foot ceiling, the nineteenth-century watercolors adorning the walls, the Steinway piano. It was all somewhat surreal in its extravagance: the campus, the catered meals and personal trainers, even this dress she was wearing, a dress she hadn’t paid for but that probably cost more than most people made in a week, maybe a month. Her talent had shown her so much of the world, taken her so far—Chicago to New York, New York to Moscow—yet she still felt as if she’d been pulled into a terrible black void.

“Sam,” came a voice. She turned to see Marie, the only other American in the company, walking toward her. “Nikolai’s been looking for you. Where have you been?”

“Is everything okay?” Marie asked.

Everything was not okay, but she wasn’t about to open up about it during cocktail hour, so instead she asked Marie to join her for a cigarette.

“You just got here.”

They stepped outside and Sam pulled a pack of cigarettes from her purse, handing one to Marie.

“How do you forget your coat?”

“What I want to know,” Marie asked, cupping her hands around the lighter, “is what you were doing in town?”

“Really?” Marie asked, smiling, wanting more. “You walked all the way to Yaroslavl?”

“It’s not that far.” Which was true. Thirty minutes round trip if she hurried, which she often did.

“Yeah, but in this weather?”

“So who is he, this guy? And why am I just now hearing about him?”

His name was Ivan, and he was a twenty-one-year-old high school dropout who cobbled together a living by repairing broken computers and selling heroin from the apartment he shared with his grandmother. Sam had met him shortly after arriving in Russia. It was one of the rare occasions when Nikolai permitted an off-site field trip to a restaurant in town, and Sam had spotted him smoking outside: a skinny, ratty-looking kid with bloodshot eyes. He spoke broken English, but Sam communicated her needs with a little tap on the forearm and a raise of the eyebrows. She ended up getting his phone number and enough drugs to get her through the week. She kept in touch with him after that, sneaking away from campus whenever her supply ran low. “No one,” she finally said. “It’s kind of over anyway.”

Inside, the conversation had quieted and Nikolai was instructing everyone to move to the dining hall for dinner. As the crowd filtered out, he approached Sam and put a hand on her shoulder. “You’re late to the party,” he said.

Nikolai was close to six and a half feet tall, with a mane of blond hair working its way toward white. He wore a tuxedo and an ostentatious watch and glossy crocodile shoes. Everything about him seemed to be cut from the finest, most expensive cloth, and he made sure to flaunt this air of elegance to everyone he met.

“I went into town,” Sam said. “For personal items.”

“We have drivers for that.”

“You’ve been here long enough to know that’s not how it works.”

“You know there’s a reason they call it a company, Samantha. I try to run it like a business. I take care of my employees, provide help when they need it.”

Sam plucked a glass of champagne from a passing waiter. Nikolai stared at her, waiting for a response.

Brady Hammes is a writer and documentary film editor living in Los Angeles. The Resolutions is his first novel. 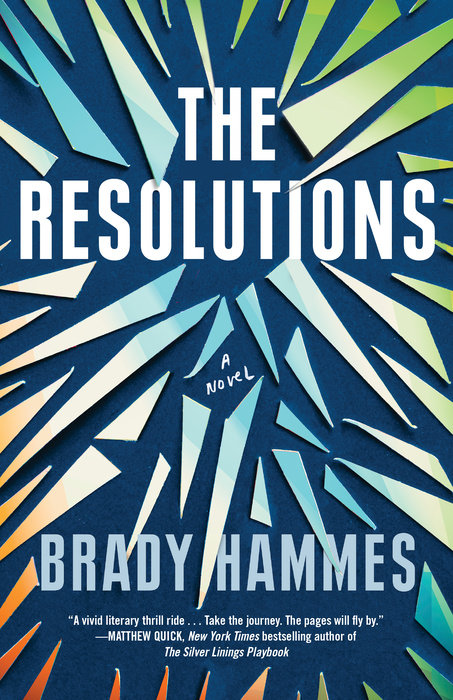