“An exceptional, fast-paced thriller featuring a tech-empowered assassin whose pattern and objective you’ve never seen before, chased by a heroine with tenacious grit.”—David Brin, author of The Postman and Existence

Quinn Mitchell is a nine-to-five spy—an intelligence analyst for the CIA during the day, and a suburban wife and mother on evenings and weekends. After her young daughter is killed in a tragic accident, sending her life into a tailspin, Quinn hopes to find a new start in her latest assignment: investigating a series of bizarre international assassinations whose victims have been found with numeric codes tattooed, burned, or carved into their flesh. As Quinn follows the killer’s trail across the globe, always one body behind, she begins uncovering disturbing connections between the murders—and herself.

Every lead she tracks down in pursuit of the assassin brings Quinn one step closer to the Epoch Index, a mysterious encrypted message discovered in the archives of the Large Hadron Collider. Its origins are unknown and decrypting it is beyond even the CIA. Yet nothing else can possibly link together a slew of unsolvable murders, an enigmatic and sophisticated serial killer who always seems to be three steps ahead, a quirky young physics prodigy whose knowledge extends well beyond her years, and, underlying everything, the inescapable tragedy of Quinn’s own past. Discovering the meaning of the Epoch Index leads Quinn to a shocking twist that shatters everything she thought she knew about the past, the future, and the delicate balance of right and wrong that she must now fight to preserve.

An excerpt from Scorpion

The first thing Kira does before she gets up is put on her legs. They balance on an inductive charging mat beside her bed between a set of steel rails, and the muscles in the young woman’s back and shoulders flair as she elevates herself. The nerve terminals in her thighs magnetically align to the pin jacks at the bottom of the carbon-­fiber cups, and the interfaces constrict until they are securely attached.

She has skins somewhere she can roll up over them, and if she were to conceal the seams where the texture-­etched urethane and her tissue meet with shorts or a tight skirt, the looks she would get on the street would be of lust and envy rather than curiosity, revulsion, or pity.

But Kira lives alone, so the servo-­mechanical guts remain exposed, and she does not even bother dressing beyond underwear, a tank top, and her aviator-­style metaspecs. She has not left the penthouse suite asylum at the top of the twisted and slowly rotating Infinity Moscow Tower in nearly four years. No good reason to even brush her teeth, or to close the master bathroom door while she pees.

Kira works nights. Her workstation is her studio, and her tools are instruments of fabrication and conspiracy. Proxies conceal her real IP and map to her many identities. Location can be cloaked from the outside world, but real-­time interaction cannot be forged, so Kira has become nocturnal. Her boss calls her a “change agent” but she knows that’s simply a way of distorting the truth. She is an agent of chaos.

The first step in her evening routine is to make herself tea. In the kitchen, she activates the kettle, and while she waits for it to boil, she sits down to flash charge the monitor affixed to her wrist. The device cannot be removed, so it must be replenished in place. She interweaves her fingers and leans forward, both arms flat against the mat. A lightning bolt icon appears in the corner of her vision, indicating that her glasses are receiving an ambient trickle charge conveyed through her biomagnetic field.

The charging mat is infused with stacks of overlapping coils that are meant to get warm but never hot, and it is not until she smells something caustic and hears an electrical pop that she is on her feet and her legs are backing her away, and she understands that she’s been burned. She kicks the cord out of the wall, turns to the sink, and runs her arm beneath a cold stream.

She can already see round, red welts forming on the inside of her forearm. It hurts, but she is no stranger to pain. Pain is always with her, and she has learned to observe it from a distance rather than letting it in.

Kira was her family’s primary source of income before the missiles hit, and her parents had her back in front of a computer before she was even out of the hospital. At home, her father carried her back and forth between her desk and the toilet, and her mother changed her bandages and brought her soup and bathed her, and they never spoke of the retaliatory attack her work provoked. It was in the past, and the past could not be changed. Kira learned from an early age that some people do not have the luxury of indulging in yesterday’s fears or even today’s chronic pain.

If any of her personal monitoring systems fail, she is supposed to alert her handlers immediately. F*** them, she thinks. They refuse to use anything that is not Russian-­made, which means half of it is trash. The other half has shit firmware that any script kiddy could hack. They will know her charger is fried when her monitor runs dry and her biometrics suddenly drop offline.

Kira slides the patio door open to help get rid of the smell. Usually she does not check the pigeons until her tea is steeping, but tonight she steps outside into the cold Moscow evening.

Once a day, a bird arrives with a new handwritten encryption key wrapped around its leg. Homing pigeons are supposed to be only one-­way. Once they have established a specific loft as their home, they will deliver messages only in that one direction. To use them again, they must be collected and redistributed. But these pigeons have been genetically engineered to have bifurcated brains with dominance that toggles according to light. They fly in one direction during the day and the opposite direction at night. Like Kira, their handlers have learned to turn their multiple identities into weapons deployed against their many enemies.

Tonight’s bird has not yet arrived, but the night air feels good, so Kira does not go back inside. She can feel the spring in the silicone tiles as she passes the pigeon loft, and she gently places her injured arm against the cold metal of the rail and looks out over the city. She is chilly, but not as cold as she would have been in the past. Legs make up 36 percent of an adult’s heat-­bleeding surface area. And Kira’s cybernetic prostheses are emanating warmth that her torso absorbs.

Kira has come to think of her relationship with her legs as symbiotic. She communicates with them through the neural pathways she formed as a little girl, and they interpret her intentions, form a consensus, and communicate spatial information back up through the same route. The vast majority of the time, it all happens unconsciously, but occasionally there are miscommunications. When it feels like her legs have suddenly gone numb, she recalibrates them by deliberately sending them a set of simple diagnostic instructions.

This time, she experiences the neurological dissonance as a dizzy spell. Her legs take her two steps back as if to help her regain her balance, which she was not aware of having lost. And then the back leg launches a firmly planted front kick that connects solidly with the rail and leaves a rippled, crumpled dent.

Because the signals travel in both directions, Kira understands exactly what is happening. There is even a part of her that, despite her trying to fight it, is actively participating. The signals are influencing her like a reversal of cause and effect; by thinking about having just kicked the rail, she is involuntarily sending her legs additional signals that, after resetting her stance, culminate in her striking the rail again.

The aluminum is shearing away from its anchors, and the third kick sends the entire middle section of railing spinning down into the dark. Kira now understands that she has been infiltrated, and that she only has seconds to detach. But the releases are not responding. And because it is supposed to be impossible for modern Russian prostheses to fail, there is no mechanical override.

She takes two steps forward, and then there is an awful, silent pause. The clatter of the rail hitting the street below rebounds off the surrounding buildings, and her brain uses the delay to make a sickening calculation. Kira has stopped trying to free herself and is now attempting to focus. She knows that she cannot physically prevent the next step, but she might still be able to regain control.

With her eyes closed, she breathes in deeply and wills everything around her to be calm and still. She grows poised and balanced, and she unexpectedly begins to feel strong and tall. Newly resolute and deeply empowered. She can no longer tell who or what is in control, but she knows that the easiest and fastest path away from the pain of her past is to have the courage to move forward. It is with this profound sense of peace that she takes that last step and allows herself to drop from the top of the tower.

The feeling is not one of flying or floating or freedom. Free fall is neither peaceful nor meditative. The atmosphere rushing past her rapidly intensifies into a roar, and it lashes at her shirt and tears the specs off her face. She feels herself pitching forward, rotating, and reflexively she tries to claw her way straight. All she can do is scream into the cold black wind until her breath is gone, and when she tries to draw another, she finds that her lungs are too weak to pull anything from the torrent of air around her. The girl is silent and limp by the time she hits, and the crack of dead weight against the concrete reverberates through the quiet.

As her body lies contorted and twisted, the burns on the inside of Kira’s pale forearm continue to redden and blister. But even though they were caused by overlapping concentric coils wrapped inside soft polymer, they are not resolving into perfect circles. It is as though only select sections of filament malfunctioned. The fresh wound is developing into what appears to be a string of digits woven out of segments of rings—­the numeric sequence 6809.

“Nobody is untouchable,” the Israeli says. “Just like I told you.”

Christian Cantrell is a software engineer living outside of Washington, D.C. He is the author of the novels Containment, Kingmaker, and Equinox, as well as several short works of speculative fiction, three of which have been optioned for film or TV. 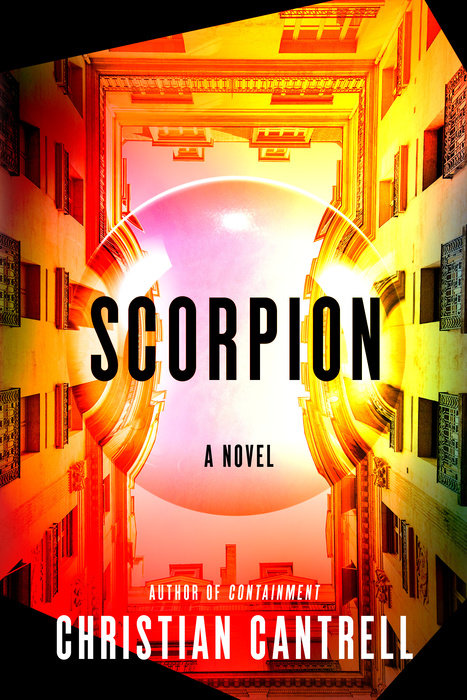