Rediscover the superpower that makes good things happen, from the professor behind Yale School of Management's most popular class

“The new rules of persuasion for a better world.”—Charles Duhigg, author of the bestsellers The Power of Habit and Smarter Faster Better

You were born influential. But then you were taught to suppress that power, to follow the rules, to wait your turn, to not make waves. Award-winning Yale professor Zoe Chance will show you how to rediscover the superpower that brings great ideas to life.

Influence doesn’t work the way you think because you don’t think the way you think. Move past common misconceptions—such as the idea that asking for more will make people dislike you—and understand why your go-to negotiation strategies are probably making you less influential. Discover the one thing that influences behavior more than anything else. Learn to cultivate charisma, negotiate comfortably and creatively, and spot manipulators before it’s too late. Along the way, you’ll meet alligators, skydivers, a mind reader in a gorilla costume, Jennifer Lawrence, Genghis Khan, and the man who saved the world by saying no.

Influence Is Your Superpower will teach you how to transform your life, your organization, and perhaps even the course of history. It’s an ethical approach to influence that will make life better for everyone, starting with you.

An excerpt from Influence Is Your Superpower

Becoming Someone People Want to Say Yes To

Once upon a time, on an auspicious day in history, you were born—­influential. In fact, influence was your only means of survival. You had no sharp teeth or claws to protect you. You couldn’t run away or camouflage yourself. You didn’t seem that smart yet, but you had an innate ability to express your desires, connect with other human beings, and persuade them to take care of you. Which they did, day and (sleepless) night, for years.

When you learned to speak, you expressed yourself more precisely, using your words to become even more influential. You told people what you wanted and what you absolutely did not want. NO! You learned quickly that life could be negotiable and began asking for later bedtimes, more television, your favorite treats. You were like a tiny carpet merchant in a Moroccan bazaar. Wielding influence was as automatic as breathing. You were growing physically stronger too, but your greatest strength was the power to persuade people to take action on your great ideas.

Interpersonal influence is our human advantage, passed down in our DNA. It is what allowed our species to band together, work together, and span the globe. It will remain our advantage in an increasingly digital world, for as long as people are in charge. It has given you the success you already have, and it’s the path to what you’re still hoping to do. It’s the love you’ll share in this life and the legacy you’ll leave behind when you die.

But things aren’t that simple, are they? Even though you know that all this is true, influence got more complicated as you grew up. While your childhood sphere of influence was expanding, you were also being taught to be obedient and play nice. To comply with norms, rules, parents, and teachers. You were discouraged from being “bossy” or demanding. You were taught to work hard in order to be deserving, wait your turn, not make waves, not take up too much space. Advocating for other people was okay, but doing it for yourself was boastful. The influence you had once enjoyed no longer felt so natural, and you began to have mixed feelings about it.

When people are asked if they’d like to be more influential, they say yes—­because influence is power. Being influential gives us the ability to create change, direct resources, and move hearts and minds. It acts like gravity, pulling us together into relationships. It’s a path to happiness; to prosperity that’s meaningful, durable, and contagious.

But when people are asked about influence strategies and influence tactics, they describe them as “manipulative,” “sneaky,” and “coercive.” The whole idea of influence has been corrupted by tacky, greedy people using tacky, greedy tactics to sell used cars, to promote sponsors’ products on social media, and to get us to buy now, while supplies last! Even some of my favorite influence gurus like Robert Cialdini and Chris Voss encourage us to use “weapons of influence” for “beating our opponents.” Marketers (I’m one of them) refer to customers as “targets,” like a pickup artist or a con artist might. Academic researchers (I’m one of them, too) have called study participants “subjects” and their experiments “manipulations.” Transactional influence treats people like objects.

These tactics might be standard for sales and marketing, but they just don’t work in most everyday situations. They don’t work with your boss, your colleagues, your employees, your friends, or your family. If you want to build a relationship, and maintain one, you can’t use the same tricks you’d use to sell a car. Even business success ultimately depends on long-­term relationships in the form of referrals, word of mouth, customer loyalty, and employee retention. You want people to be happy to say yes both today and in the future.

When you become someone people want to say yes to, you are heavily rewarded. Money might not be your top priority, but it helps you get other things done, and it can be a benchmark for influence. It’s no coincidence that jobs relying on interpersonal influence are well compensated. Top salespeople make more money than their CEOs; lobbyists earn more than the politicians they influence. Becoming more influential pays other tangible dividends too—­doctors who communicate better are far less likely to be sued for malpractice regardless of their patients’ outcomes, and executives who are trained to communicate get rated as better leaders.

People who shift from transactional, win-­lose influence to the personal, mutual influence you’ll be rediscovering in this book can reap intangible rewards like becoming a better friend, a more trusted adviser, and a more engaged partner and parent. We can rekindle the childhood spark that had us dreaming, asking, advocating, negotiating, and persisting without second-­guessing ourselves. We can see faces light up when we share a great idea or propose something crazy that just might work; we can shake on deals we were embarrassed to even dream of; we can enjoy the comfort and freedom that come from success; and we can sigh in relief as our resistant boss, employee, child, parent, partner, or friend smiles, and says, “Okay, let’s do it.”

Maybe you already feel influential, say, with customers. But even those of us who are comfortable influencing people in some domains tend to feel helpless in others. I’ve worked with CEOs who were afraid to ask their teenage daughters to clean up their rooms, Wall Street traders who felt awkward trying to get a busy bartender’s attention, rising politicians so uncomfortable “dialing for dollars” that they had to switch careers, and famous activists willing to be jailed for the rights of others who felt their throats close up when trying to advocate for themselves.

I find that kind people are particularly reluctant to try to influence others because they don’t want to manipulate anyone. And smart people are more likely to misunderstand the way influence works. So if you’re a kind, smart person, you have a double liability that keeps you from being as influential as you could be. But as you shift your perspective and practice some new tools, you’ll find some of these obstacles melting away.

Zoe Chance is a writer, teacher, researcher, and climate philanthropist. She’s obsessed with the topic of interpersonal influence, and her science-based but fun and life-changing book is called Influence Is Your Superpower: The Science of Winning Hearts, Sparking Change, and Making Good Things Happen. She earned her doctorate from Harvard and now teaches the most popular course at the Yale School of Management (Mastering Influence and Persuasion). Her research has been published in top academic journals and covered in global media outlets. She speaks on television and around the world, and her framework for behavioral change is the foundation for Google’s global food policy. Before joining academia, Chance managed a $200 million segment of the Barbie brand, helped out with political campaigns, and worked in less glamorous influence jobs like door-to-door sales and telemarketing. She lives with her family in New Haven, Connecticut. 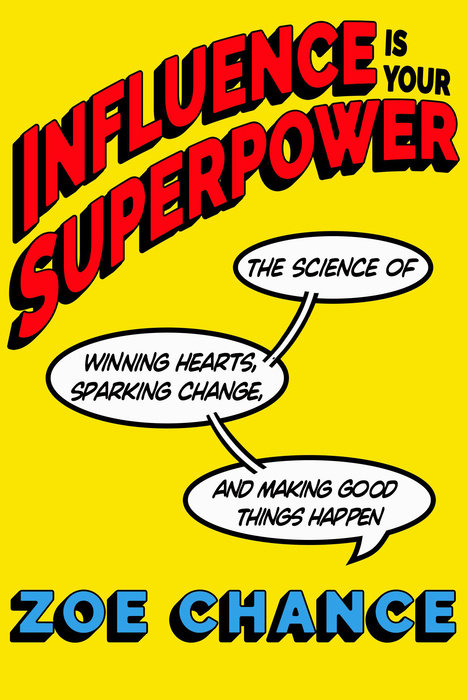