From the New York Times bestselling author of The Iron Druid Chronicles comes book two of an “action-packed, enchantingly fun” (Booklist) spin-off series, as an eccentric master of rare magic solves a supernatural mystery Down Under!

There’s only one Al MacBharrais: Though other Scotsmen may have dramatic mustaches and a taste for fancy cocktails, Al also has a unique talent. He’s a master of ink and sigil magic. In his gifted hands, paper and pen can work wondrous spells.

But Al isn’t quite alone: He is part of a global network of sigil agents who use their powers to protect the world from mischievous gods and strange monsters. So when a fellow agent disappears under sinister circumstances in Australia, Al leaves behind the cozy pubs and cafes of Glasgow and travels to the Dandenong Ranges in Victoria to solve the mystery.

The trail to his colleague begins to pile up with bodies at alarming speed, so Al is grateful his friends have come to help—especially Nadia, his accountant who moonlights as a pit fighter. Together with a whisky-loving hobgoblin known as Buck Foi and the ancient Druid Atticus O’Sullivan, along with his dogs, Oberon and Starbuck, Al and Nadia will face down the wildest wonders Australia—and the supernatural world—can throw at them, and confront a legendary monster not seen in centuries.

An excerpt from Paper & Blood

A Call from the Land Down Under

If you have to tell someone they’re going to die soon, it’s a good idea to buy them a whisky first. That way they can drink it or throw it in your face and feel a tiny bit better either way. It’s only polite.

Buck Foi thought about throwing his dram at me—his hand drew back, ready to strike—but he reconsidered and tossed it down his throat instead. It was getting on toward bedtime on a Sunday night. It might help him to sleep.

“How long have ye known this was gonnay happen?” the hobgoblin demanded. He had a new waistcoat on, a subtle black-on-black pattern that amused me. He would never admit it, but I think he was either trying to impress my manager, Nadia, or else he was impressed by her and emulating her fashion philosophy that all colors were excellent so long as they were black. The stated reason for wearing it, however, was that he needed to wear something appropriate to the Glasgow Necropolis, since we had gone there for a nice gothic sulk that morning while the organ droned in the nearby cathedral. It was a thirty-seven-acre city of the dead set upon a hill, populated by solemn mausoleums and weathered markers commemorating the lives of Victorian well-to-dos, and the gravitas it exuded did tend to make one feel that at least a nod to formality was required. Without walking it myself, I taught him the winding steps of the Old Way hidden in the grass between the graves, which would let him go to Tír na nÓg if he ever found it necessary. He already knew the steps to the Old Way in Kelvingrove but not to this one or the one in Virginia Court.

I replied to him via my text-to-speech app—the good one on my laptop, which at least sounded Scottish, albeit from Edinburgh instead of Glasgow. [Brighid told me about the curse shortly after you signed up to be in my service. We had more pressing matters to attend to at the time—a goddess trying to kill us and an utterly mad man-eating leprechaun and all that—so I waited just a wee bit.]

The hobgoblin teleported himself up to the kitchen island next to my laptop and waggled a pink finger in my face. He was only about two feet tall, so he liked to stand on the counter and look down at me instead of up when he had an important point to make. “That was a couple of months ago, ol’ man!”

[Aye, but I also wanted you to enjoy bottling and distributing Buck Foi’s Best Boosted Spirits. A nice soft time, a short span of happiness to enjoy and remember before I laid any more stress on you. Wasn’t that nice, giving away all that whisky to the Fae Court?]

“Aye, it was a good laugh.” His expression relaxed for a moment, recalling it. Two hundred bottles of ten-year-old whisky made from an honestly stolen barrel from the Highlands, given for free to the faeries and the Tuatha Dé Danann themselves. “Did ye know, MacBharrais, they composed songs in my honor on the spot? I mean, half of it was howled, because ma whisky kicked off an epic drunken orgy, but still: They sang me songs. I’m no a culture hero yet, ye know, not like Holga Thunderpoot, but it was quality all the same, and I think I have a legitimate shot at achieving that rare status someday if only I don’t die first.” He practically shouted the last two words, and I received a few wayward flecks of manic spittle. I cringed a little more than I might have a few years ago; echoes of the coronavirus pandemic bore heavily on everyone’s psyche, though hobgoblins were not known to transmit viruses to humans.

[I’d like you to live to achieve that status, believe me. Not just because I care about you, though I do. If I can get rid of these curses, I can talk without this app. I’ll be able to speak with people again for more than a few days or weeks without causing them to hate me. I’ll get my family back. And I can finally train an apprentice to replace me so I can retire. An apprentice that won’t die of a sudden accident, like you’re apparently fated to do.]

“Come on, now. There has tae be a way around this, right?”

“How many is several, again?”

[More than two, I think, but less than a half dozen.]

[One is that I die. I have to be honest: That’s my least favorite way out.]

[Two is that the person who cast the curse on me dies. I like that much better, but, unfortunately, I don’t know who did this to me. Brighid said it might be someone with god-level powers, so even if we do find out who did it, killing them might be impossible.]

“That’s bitter news, so it is. Like fast-food coffee with no cream or sugar.”

[Three is that you leave my service, cancel the contract. There are risks to that, however.]

[Like the curse might still go off in any case, now that you’ve been exposed. There’s simply no way to know. But also, if I release you from your contract, you’ll need to return to the Fae planes unless you can get another contract to remain. I’m not sure you’ll be able to. I’m pretty certain none of the other sigil agents are in the market for a hobgoblin.]

“Hold on, now. I know the man in Philadelphia isnae—Eli whatsisname—because he made it clear he doesnae have use for hobgoblins. Plus he let his dog hump me while I was unconscious that time and he took pictures. Wot about the others?”

[Diego is extremely handsome and doesn’t like anything that distracts from that. He has his own personal gravity and doesn’t want anything to yank people out of his orbit. Shu-hua tends to avoid the company of men, and Mei-ling is so old that she thinks that I’m young and rash at age sixty-three. So: no. I’m the only one daft enough to draft a hobgoblin into service.]

Hearing it spoken aloud—that I was daft—caused an unexpected self-inflicted wound. Or, rather, tore the bandage off a wound that had not healed. The fact that I’d been so slow to discover the nature of my curses and completely missed the criminal activity of my last apprentice still stung. I was long past the time when I was supposed to have my shite together, yet I very clearly did not.

“So that’s all the options?” Buck demanded. “I’m boned like a fish on Friday?”

I couldn’t resist ribbing him. [Well, option four is that you die somehow completely unrelated to the curse, and then you wouldn’t have any worries.]

“Oh-ho.” He narrowed his eyes and shook his head. “Ho-ho-hooooh. The revenge I’ll have on ye for this will be written down, MacBharrais. Written down in the anals of history, it will, whispered in the dark as a warning to wee weans—”

[I think you meant to say annals. The extra n makes a small but vital difference.]

“Don’t interrupt me! The anals of history is what I meant!”

“It’s gonnay be! Sign me up for service and then tell me two months later I’m gonnay croak like a choir of bullfrogs? That shite belongs in the anals if anything does!”

[Okay. Let’s focus on how to fix the problem, shall we?]

“I thought ye basically said it cannae be fixed in any way that works out well for us.”

[We have a year to work on this. Every apprentice made it at least a year before an accident befell them. If we can find out who put the curse on me, we might find a solution.]

“How long have ye been living with it so far? Eleven years? What makes ye think ye have a shot at figuring it out now?”

[I’m properly motivated. I didn’t realize that there was a second curse killing my apprentices until Brighid told me so. When I thought I was the only one suffering, I could live with it, because I’m Scottish. Now it’s different because there’s vengeance—or at least justice—due for my apprentices. And saving you.]

The hobgoblin deflated and sighed. “Gods below, I could use a beer. Ye want?”

I nodded at him, and he hopped off the counter and disappeared from my view. But I saw the refrigerator door open, and then he nimbly leapt up to snag a growler of stolen ale. A few more leaps around the kitchen and he had a couple of pints set before us. He stood on a stool next to mine and grabbed his pint with both hands. It was quite nearly half his height.

“G’wan, then. Dazzle me with what ye have so far.”

[If we are looking at pantheons that are traditionally known for curses, the Olympians and the Egyptians were both known for bestowing curses upon mortals, and both happen to be in my territory as a sigil agent. I have no doubt annoyed them both just by doing my job.]

“But those each have, wot, fifteen gods or more?”

“Well, that’s sobering. But this should fix that.” He promptly drained half his glass at one go.

[There’s also the infernals. They quite enjoy a good curse.]

[It’s a catchall term for any of the demons in the various hells.]

“Why would they want tae curse ye?”

[I’ve killed a couple of them in my time. They might have had friends, if demons have friends. Not too clear on that.] 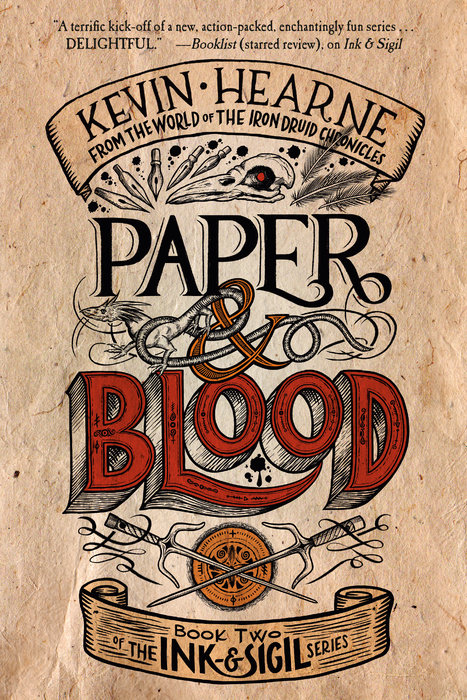