A renowned historian traces the life of a single object handed down through three generations of Black women to craft an extraordinary testament to people who are left out of the archives.

“A history told with brilliance and tenderness and fearlessness.”—Jill Lepore, author of These Truths: A History of the United States

In 1850s South Carolina, an enslaved woman named Rose faced a crisis, the imminent sale of her daughter Ashley. Thinking quickly, she packed a cotton bag with a few precious items as a token of love and to try to ensure Ashley’s survival. Soon after, the nine-year-old girl was separated from her mother and sold.

Decades later, Ashley’s granddaughter Ruth embroidered this family history on the bag in spare yet haunting language— including Rose’s wish that “It be filled with my Love always.” Ruth’s sewn words, the reason we remember Ashley’s sack today, evoke a sweeping family story of loss and of love passed down through generations. Now, in this illuminating, deeply moving new book inspired by Rose’s gift to Ashley, historian Tiya Miles carefully unearths these women’s faint presence in archival records to follow the paths of their lives—and the lives of so many women like them—to write a singular and revelatory history of the experience of slavery, and the uncertain freedom afterward, in the United States.

The search to uncover this history is part of the story itself. For where the historical record falls short of capturing Rose’s, Ashley’s, and Ruth’s full lives, Miles turns to objects and to art as equally important sources, assembling a chorus of women’s and families’ stories and critiquing the scant archives that for decades have overlooked so many. The contents of Ashley’s sack— a tattered dress, handfuls of pecans, a braid of hair, “my Love always”—are eloquent evidence of the lives these women lived. As she follows Ashley’s journey, Miles metaphorically unpacks the bag, deepening its emotional resonance and exploring the meanings and significance of everything it contained.

All That She Carried is a poignant story of resilience and of love passed down through generations of women against steep odds. It honors the creativity and fierce resourcefulness of people who preserved family ties even when official systems refused to do so, and it serves as a visionary illustration of how to reconstruct and recount their stories today.

An excerpt from All That She Carried

Then I found the slave lists. There were bundles of them, in thick sheaves, each sheaf containing a stack. When a rice planter handed out shoes, he wrote down the names of who got them. To pay taxes, he made an inventory of his human property. If he bought fabric so people could make clothes, he noted how many yards were given to each person. When a woman gave birth, the date and name of the child appeared.

As a young woman with modest means and few prospects, Ruth Middleton transformed her life by moving north. Taking a leap into the unknown as a Black woman in the 1910s required tremendous courage. Ruth was still a teenager at the time, living in Columbia, South Carolina, and laboring as a domestic. She may have already met her future fiancé, Arthur Middleton, a South Carolinian from Camden and a tiremaker by trade. And she would have known from what she heard and saw, and perhaps from incidents in her own life, that the South was still a dangerous place for African Americans at the start of the new century. The first generations to be born to freedom found few job opportunities beyond the agricultural work their forebears had done, risked indebtedness in the sharecropping system, and faced public humiliation as well as unpredictable violence in everyday life. Perhaps Ruth and Arthur evaluated their situation and determined that only drastic change would better it. For they, like so many other African Americans fed up with the dusty prejudice of the South, packed their retinue of things and traveled northward seeking safety and opportunity.

Ruth and Arthur made this move amid the uncertainty of World War I and a deadly flu epidemic, joining what historians have called the first wave of the Great Migration, which would, by the 1970s, reshape the demography and political landscape of the entire United States. African Americans who had predominantly lived in the rural South relocated in the hundreds of thousands to the urban South, urban Midwest, urban West, and urban North in search of physical security and economic opportunity. Half a million of these travelers relocated to northern cities in the period when Ruth uprooted herself, between 1914 and 1920. They pulled up stakes, packed their bags, and left behind all they knew and many whom they loved. Those who departed must have faced tough decisions about which items they could afford to bring along on the journey and which things they would give away or abandon. Practical objects like skillets and skirts, cherished things like handmade quilts, and valuable items like tools and books might each have been scrutinized, weighed, and considered. We have no inventory of a great migration of things that accompanied African Americans northward and westward. Ruth Middleton’s case stands as a precious exception.

When Ruth arrived in Philadelphia around the year 1918, she brought along the cotton sack that Rose had prepared for Ashley. Ruth’s attachment to the textile reflects an important aspect of women’s historical experience with things. While free men have historically owned and passed down “real” property (especially in the form of land), women have typically had only “movable” property (like furniture and linens—and, if the women in question were slaveholders, people) at their disposal. Although American women possessed a limited form of property, they used that property intentionally to “assert identities, build alliances, and weave family bonds torn by marriage, death, or migration.” A New England–born white woman in the colonial era, for example, cherished a passed-down painted chest not only for its function but also for the ways in which the object connected her to her women forebears, reinforcing a sense of belonging not to male ancestors but to a line of women. Ruth Middleton, who would take her husband’s name upon marriage, as was the American legal custom, also took her foremother’s sack as she traveled north. And one day, when she was herself on the verge of motherhood, Ruth decided to annotate it.

Ruth’s fabric testament to Black love and women’s perseverance did not—perhaps could not—exist in any historical archive. Though necessary to the work of uncovering the past, archives are nevertheless limited and misleading storehouses of information. While at times imposing and formal enough as to seem all-encompassing in their brick, glass, and steel structures, archives only include records that survived accident, were viewed as important in their time or in some subsequent period, and were deemed worthy of preservation. These records were originally created by fallible people rather like you and me, who could err in their jottings, hold vexed feelings they sometimes transmitted onto the page, or consciously or unconsciously misconstrue events they witnessed. Even in their most organized form, archived records are mere scraps of accounts of previous happenings, “rags of realities” that we painstakingly stitch together in order to picture past societies.

Even when compared with the motley rags that make up the archives of history, the nineteenth-century seed sack that we are exploring together here appears particularly threadbare. Ruth’s embroidery is the only definitive primary source detailing the fate of Rose and Ashley. In addition, read in a certain mood, Ruth’s verse on the bag can feel more like poetry than reportage. Slight on facts and specifics, the embroidered text states only three names (Rose, Ruth, and Ashley), one place (South Carolina), and one date (1921). None of the sources that scholars typically use to reconstruct histories of slavery directly address this object. No plantation supply log exists that tells of the sack’s manufacture or acquisition. No mistress’s handwritten letter describes an interaction with Rose. No formal bill of sale lists a buyer of Ashley. No published slave narrative describes this family and their travails. The bag dates back to the 1840s or 1850s, but the writing was added in the 1920s. And perhaps most glaringly—and, for the historian, most alarmingly—we have only one person’s word that events took place as described and that the bag was packed with the listed items.

Ruth Middleton, that one person, probably rendered the details as she recalled them. While we can presume that she told the truth as she knew it, Ruth’s version of events was formed, like any other, through the lenses of memory and narrative desire—what she consciously or unconsciously wanted this family story to mean. There is no reason to think that Ruth wrote this story as fiction, given the form she chose (amateur embroidery on a personal object with no commercial value at the time) as well as the first-person voice she used. The intimate, possessive, and immediate tone of the line “Ashley is my grandmother” suggests that Ruth knew this relative and remembered her. The tale she stitched for private use was by no indications imagined, and by all reckoning, it was true to Ruth. Still, as a vehicle of historical recovery, memory is at least as fallible as paper records. It is possible, even likely, that Ruth mistook, mis-recalled, or rearranged aspects of her emotional family account. We all do this when drawing out and thinking through memory, a malleable store of information “retrieved even as it is refashioned.”

Nevertheless, with steady hands we can thread the eye of this needle and ask what Ruth’s record can tell us about Black women, Black families, women crafters, and Black material, as well as social, worlds. By doing so, we refuse to give up on those many people of the past who did not—could not—leave behind troves of documents. To abandon these individuals, the “archivally unknown” who fell through the cracks of class, race, and position, would consign them to a “second death” by permitting their erasure from history.8 It would also mean turning our faces away from fuller, if unwelcome, truths about our country and ourselves. Ruth’s account, subjective and incomplete as it may be, stands as a baseline rebuttal to the reams of slaveholder documents that categorized people as objects. Her list of a dress, a braid, pecans, and whispered love accounts for the things that sustained life, rather than rendering lives as things. If Ruth’s text did nothing else but replace the “slave list” of our cultural script with Rose’s shimmering inventory, it would be enough. And yet Ruth’s cloth chronicle does much more. By recovering, for history, Rose, her life conditions, and her act of love, Ruth sets the record straight.

Tiya Miles is professor of history and Radcliffe Alumnae Professor at the Radcliffe Institute for Advanced Study and director of the Charles Warren Center for Studies in American History at Harvard University. She is a recipient of a MacArthur Foundation fellowship and the Hiett Prize in the Humanities from the Dallas Institute of Humanities and Culture. Miles is the author of The Dawn of Detroit, which won the Frederick Douglass Book Prize, among other honors, as well as the acclaimed books Ties That Bind, The House on Diamond Hill, The Cherokee Rose: A Novel of Gardens and Ghosts, and Tales from the Haunted South, a published lecture series. 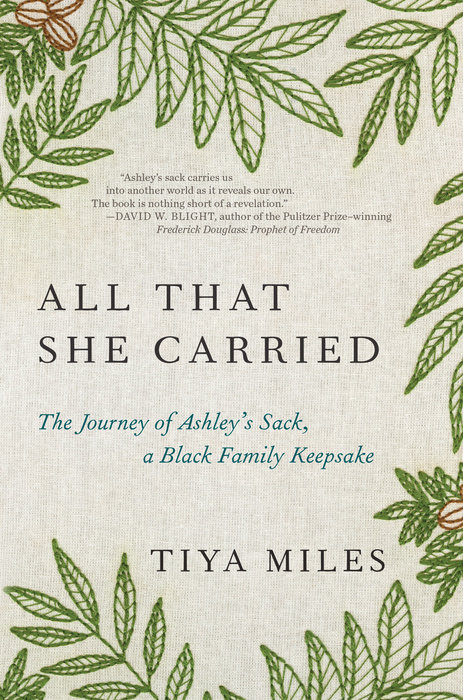