What Kids Need for a Fulfilled Life

A blueprint for how parents can stop worrying about their children’s future and start helping them prepare for it, from the cofounder and CEO of one of America’s most innovative public-school networks

“A treasure trove of deeply practical wisdom that accords with everything I know about how children thrive.”—Angela Duckworth, New York Times bestselling author of Grit

In 2003, Diane Tavenner cofounded the first school in what would become Summit Public Schools, which has since won national recognition for its exceptional outcomes: 99 percent of students are accepted to a four-year college, and its students graduate college at twice the national average.

But in a radical departure from the environments created by the college admissions arms race, Summit students aren’t focused on competing with their classmates for rankings or test scores. Instead, students spend their days solving real-world problems and developing the skills of self-direction, collaboration, and reflection, all of which prepare them to succeed in college, thrive in today’s workplace, and lead a secure and fulfilled life.

Through personal stories and hard-earned lessons from Summit’s exceptional team of educators and diverse students, Tavenner shares the learning philosophies underlying the Summit model and offers a blueprint for any parent who wants to stop worrying about their children’s future—and start helping them prepare for it.

At a time when many students are struggling to regain educational and developmental ground lost to the disruptions of the pandemic, Prepared is more urgent and necessary than ever.

An excerpt from Prepared

Because Introduction Should Mean More

The first Summit Preparatory Charter High School class graduated on a beautiful, sunny June day in 2007 in Redwood City, California, about a half hour south of San Francisco. This graduation looked nothing like any other school’s in the nation. There was no alphabetization of graduates by last name, no valedictorian, no outside speaker, no rushing of kids across the stage while the audience held their applause until the end. Just as we’d approached the school itself over the past four years, we wanted to do graduation differently, and intentionally.

We had a temporary campus that year, situated on a portion of the twenty-­two-­acre Sequoia High School grounds, and we’d borrowed the campus’s Carrington Hall for the ceremony. A historic Spanish-­style theater built in the early 1920s, Carrington had traditional orchestra, mezzanine, and balcony seating to accommodate four hundred people, and a grandeur that added a sense of seriousness and importance to the occasion. We were finally living up to the promise I had made to all of these families when they took a chance on the school. One of the things that made Summit unique was that 100 percent of Summit’s graduates met four-­year-­college entrance requirements (the national average was around 40 percent). And 98 percent (all that had applied) were accepted to at least one four-­year college.

As the school’s principal, I gathered with the eighty graduates a good block away from the auditorium so we could line up and enter the theater without parents and family seeing us beforehand, much like a bride enters a wedding chapel. Every such decision about this day had been carefully thought through.

The graduates walked in with their mentor groups. Every student had a mentor, someone who was also a teacher, as well as a group of fifteen to twenty other students they met with throughout their school career. Our mentors had developed special relationships with the students they coached and supported. Each mentor was someone the students trusted, whom they could talk to, who cared about them and their success, who met with them daily, had eaten meals at their homes with their families, and had been their advocate. Sometimes our mentors worked with their students to clarify their academic goals. But just as often, they helped them sort through a problem at home, or navigate a stressful social dynamic.

Each of the graduates was also accompanied into the auditorium by someone who had been important to their journey in life, like a parent or relative. The mentor’s efforts complemented those of the family member; together they committed to supporting the student that day, and into the future.

I stopped to straighten ties, reposition caps, to accept hugs and pose for pictures. Isabella grinned a dimpled smile as she teased, “Ms. Tavenner, are you ever going to stop fussing over us?” I poked back, “I’m going to have to. You’re leaving me.” My heart constricted at the thought, and I moved on before my emotions began to overflow.

The building was filled to capacity. Every single person rose as one to applaud as we walked down the aisle. I watched the faces of the graduates’ parents and tried to imagine how I would feel when Rett, my son, would make this walk with me. Tonight, I spied him in the front row with his father, wildly waving his five-­year-­old hand to catch my attention.

When at last the deep red, heavy curtain was raised to reveal the entire class up on the stage, the crowd exploded into cheers. The fragile control I’d been maintaining broke and tears began to flow down my cheeks, just as I was called upon to speak. Fortunately, everyone was used to me. “Ms. Tavenner is a crier,” the students would explain to the new class each year. “She can’t help herself. She loves us.”

I kept my remarks brief, because the day wasn’t about me. The whole ceremony revolved around seeing each and every individual student—­letting them know they were all valued and important. It was part of Summit’s mission. Each of the mentors told stories about the students in their group, and then, when each graduate crossed the stage, a projector flashed pictures of him or her first as a child, then as a senior, and an audio recording played of the student sharing a quote they’d chosen to capture their journey.

I knew these children, or should I say young adults, and their families. I knew how they thought, how they wrote, how they spoke and performed. I knew what they cared about, as well as their fears, and the habits they had formed and struggled with. I knew their dreams, and what they wanted from life. And though I’d participated in countless graduations before this one, for the first time in my career, I honestly knew they were each ready to go to college, to be an adult. As the audience departed the hall they spontaneously formed a human tunnel. When the graduates emerged, they were met with a cheer usually reserved for star athletes. They walked a long, loud, supportive gauntlet. And emerged, prepared for life.

As I watched them, marveling at how far they’d come, I recognized just how far I’d come along with them.

When I was in third grade, in the late 1970s, my teacher asked me to step out of class with her one day. She was a beautiful, young, popular teacher. She had blond feathered hair, held back in tortoiseshell combs, and wore fashionable bell-­bottom jeans and tall wedge heels. She loved butterflies, which adorned her classroom, and most of the girls wanted to be just like her. In my memory, she towered above me, arms crossed, leaning against a cabinet just outside the classroom entrance. I stood before her with my head down, eyes on the ground, feeling exposed and nervous.

She spoke calmly and slowly. “Diane, I’m talking with you today because you are not paying attention. You aren’t doing your work.” She paused for a moment and I felt her stare boring into me. I braced for what was to come next. She took a deep breath and continued, “And you aren’t clean. If you don’t change your behavior, your future is not going to be very bright.”

What my teacher didn’t know as she spoke those words, delivered perhaps to motivate me or at least to scare me into action, was that there had been another fight at home earlier in the week. This one was particularly bad. My mom had been hurt, and the police had taken my dad away. This time he hadn’t returned the next morning. I was afraid. And I didn’t know what would happen when my dad finally came home. I didn’t want to be caught off guard. I wasn’t sleeping because I was anxious, forcing myself to stay awake. And I wasn’t bathing because I didn’t want to be caught exposed, unprotected. My teacher was right. I wasn’t focused on doing my work. I was dirty because I was terrified. And now I was ashamed.

But I didn’t have a voice to respond to her that day. I couldn’t tell my story. I couldn’t ask for help. I didn’t have the words or the power to change my circumstances. And so I went back into the classroom, sat apart from the other students so as to not bother them with my smell, and tried my best to complete a worksheet.

Statistically speaking, I should not be writing this book. Schools aren’t constructed to support a student like me. I shouldn’t have earned the degrees I did, gotten the jobs I’ve had, or worked with the people I’ve been so privileged to work with. I got lucky. I had some key champions during pivotal moments who saw something in me I didn’t see in myself. The bad decisions I made, born from bad circumstances, were fortunately not irreparable. I tumbled my way through school and managed to land in college, where I became a psychology major, in order to try to figure out my life and myself. In an effort to earn extra credit in a general education course, I volunteered in a local elementary school. It was there where I first experienced the joy of helping someone learn. It was a feeling I’ll never forget. It was so motivating that I took every opportunity to volunteer, often staying up late into the night to prepare lessons for “my students” while my own classwork sat untouched.

I became a teacher because I thought I could make a difference for kids like me. I thought I could know them and their stories. I imagined defending them so they wouldn’t have to experience the fear I had felt. More important, I thought I could take my degrees and training and help to change their circumstances, to break the unproductive cycles I’d learned all about and thought I understood.

Diane Tavenner is the cofounder and CEO of Summit Public Schools, a nationally recognized nonprofit that operates fifteen middle and high schools in California and Washington. She developed a school model centered on real-world experiences, self-direction, collaboration, and reflection—preparing all students to succeed in college, thrive in today’s workplace, and lead a secure and fulfilled life. Summit has earned many accolades and distinctions, most notably America’s Best High Schools from U.S. News & World Report, America’s Most Challenging High Schools by The Washington Post, and one of the world’s Top 10 Most Innovative Companies in Education by Fast Company. A lifelong educator, Tavenner spent a decade as a school teacher, administrator, and leader in traditional urban and suburban public schools throughout California. She is on the board of the Carnegie Foundation for the Advancement of Teaching. She has a degree in psychology and sociology from USC and a master’s in administration and policy from Stanford University.

What Kids Need for a Fulfilled Life 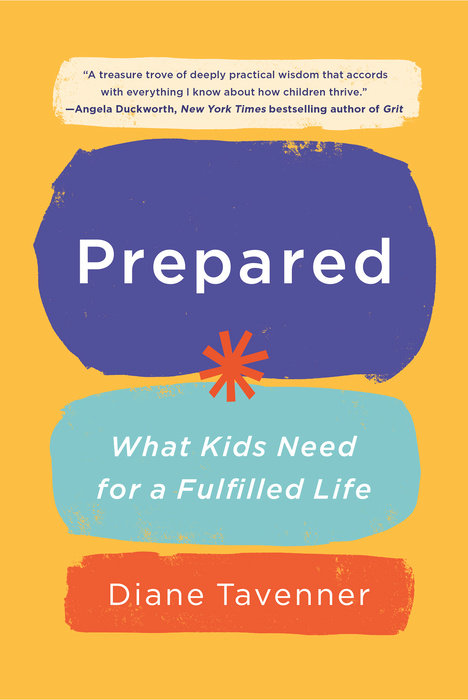