A novelist discovers the dark side of Hollywood and reckons with ambition, corruption, and connectedness in the age of environmental collapse and ecological awakening—a darkly unsettling near-future novel for readers of Don DeLillo and Ottessa Moshfegh

East Coast novelist Patrick Hamlin has come to Hollywood with simple goals in mind: overseeing the production of a film adaptation of one of his books, preventing starlet Cassidy Carter's disruptive behavior from derailing said production, and turning this last-ditch effort at career resuscitation into the sort of success that will dazzle his wife and daughter back home. But California is not as he imagined: Drought, wildfire, and corporate corruption are omnipresent, and the company behind a mysterious new brand of synthetic water seems to be at the root of it all. Patrick partners with Cassidy—after having been her reluctant chauffeur for weeks—and the two of them investigate the sun-scorched city's darker crevices, where they discover that catastrophe resembles order until the last possible second.

In this often-witty and all-too-timely story, Alexandra Kleeman grapples with the corruption of our environment in the age of alternative facts. Something New Under the Sun is a meticulous and deeply felt accounting of our very human anxieties, liabilities, dependencies, and, ultimately, responsibility to truth.

An excerpt from Something New Under the Sun


In the photographs posted online, the restaurant is enchanting: shady and cool in a land of so much sunlight and bare, exposed skin. In one photo, a close-up of a whole spatch-cocked quail, grilled with preserved kumquat, is set against a colorful salad of shaved fennel, caraway seeds, and smoked juniper berries. The body of the quail is fragile and precise, like a tropical flower. Small crooked wings and glossy drumsticks encircle a vacated center, where the guts have been extracted with the tender skill of a model-airplane hobbyist. Past the tight-focus food, the background is a murk of charcoal grays and moody blues, indistinctly stylish. In another photo, a gray granite bar slopes a mellow S, bordered on one side by a line of gleaming gold-tone Art Nouveau barstools, on the other by a wall of artisanal tequilas reaching all the way up to the vaulted ceiling. At the right side of the image, individual dining tables in dark wood and oiled metal are cast in somber window-light and shadow, like a Vermeer painting of a high-end gastropub. In reality, the place feels like a cave: dark and in-set, with a guillotine of expensive brass lights dangling overhead.

Patrick sits in the corner of a large, steep-backed booth upholstered in cerulean velvet, with two brand-new copies of his novel Elsinore Lane on the table before him. He’s tall enough, five foot ten, which is almost six feet, but the booth is designed to make all guests feel small and weak, regardless of their size or body type. The tufted back rises up over his head, culminating in a forward-curving cushion that pushes his head down slightly, forcing him to slouch. On the way here, his rideshare had gotten stuck in traffic, and he had spent most of the trip trying to think of how he’d play his tardiness off to Jay Arvid and Brenda Billington, the film’s executive producers. Lateness, a sign of irresponsibility, could be transformed into a sign of power under the right circumstances: What if he was late because he had to take an important call from his agent? What if he had traveled farther, say from Malibu or Venice Beach, where he had been meeting with a celebrity film editor that he might want to bring on board? What if he had been on the phone with his family, a diligent and beloved father, handling one of their problems from afar?

But instead he had shown up only a few minutes late to find the restaurant nearly empty, the only people in the dining room the waitstaff and hostess, staring into the bottomless depths of their smartphones, exchanging short, flirtatious jokes that made him feel invisible. It had been forty minutes already, and Patrick was devoting himself, now, to thinking about how he might play off his earliness. What if he, too, had only just arrived a few minutes ago? What if, on entering, they found him immersed in a phone call that he wrapped up, graciously, before greeting them with a strong slap on the back? A half-hug handshake? With a raised hand toward the waiter, he requests another plate of bread and olive oil.

Arvid and Billington arrive, greeted by the maître d’, the slender hostess, the bread sommelier, and the waitstaff by the door, all wishing them well. It’s impossible to see them, but Patrick infers where they are from the direction in which the black-trousered bodies of waiters are turned. He’s looking for the face that came up on the image search, a soft-necked man with an angular nose and a gentle chin, but the man who emerges from the throng of restaurant staffers has a more chiseled appearance. His neck has the tanned, sinewy heft of an artisanally crafted hatchet, something sold with its own hand-worked leather carrying case. He reminds Patrick of someone famously good-looking, some interchangeable leading man or a smooth, liquid blend of them all. First he thinks of Gerard Butler, then Edward Norton, then Russell Crowe, though looking at the face before him makes it harder to call any other face up for comparison. In a few seconds, Jay Arvid, who actually happens to be exactly six feet though he looks even taller, is standing next to Patrick, hoisting him up to his feet for a combination handshake-backslap. Behind him is Brenda, hair silky and mink-colored and wearing oversized red plastic eyeglasses affixed to a chintzy gold chain, the privileged art-school daughter of somebody extremely powerful. She holds her slender white hand up and gives Patrick a little wave, though she is close enough for a handshake, if she wanted one.

“So glad we could do this,” says Arvid in a way that sounds both off hand and heartfelt. “It’s such a pleasure to meet the author.”

“It’s not every day that we have dinner with a writer,” says Billington. “I guess Jay and I will have to watch our sentences. Not to give too much away, but there’s a fourth coming tonight. It’s a big surprise.”

Billington orders red wine for the table; then Patrick calls the waitress back and asks for some water.

“WAT-R?” asks the waitress, looking from Patrick’s face to Jay’s to Brenda’s. “No problem.”

Wine glugs from the bottle. The three of them toast. Patrick toasts with WAT-R. He misjudges the rim of the hand-blown glass tumbler and ends up with WAT-R down the front of his button-down. Everything feels like it’s happening at 1.5x speed, a phantom finger on the fast-forward button, dragging the scene ahead to its action point. He lifts the glass up to the light to check for holes or leaks, but all he sees are the overhead lights shifting back and forth in mottled clarity. The ice has settled in a heap at the bottom of the glass, and this seems strange to him. He tries to think of another time when he’s seen this happen, but he’s coming up empty.

“Don’t worry, it won’t bite,” Brenda says, eyeing him. “You don’t have much of this stuff on the East Coast, do you?” Her delivery makes him self-conscious.

Patrick takes two quick gulps and sets the glass down on the table.

“So, Hamlin. I have to tell you,” says Arvid warmly, leaning toward Patrick. “When I picked your book up for the first time. I turned it over and read those words on the back. ‘A ghost story,’ it said, ‘written in family blood.’ It sent shivers down my back. What an amazing tale.”

“Thanks so much,” says Patrick, taking a gulp of wine. “That line was from the Times review.”

“Ghost stories are sure bets in our industry,” says Brenda, nibbling at a piece of bread. “Audiences like them. You know there’s never going to be a ghost hanging around someplace for a boring reason. Where there’s a ghost, there’s a story.”

“Well, I don’t really think of the novel as a ghost story, I suppose,” Patrick says. As he speaks about his work, he gains momentum. “Or . . . it’s a ghost story in the sense that Hamlet is a ghost story—in other words, not so much. I was really writing from personal experience—coming back to my hometown after my father passed away, finding that my mother was already beginning a new relationship. How quickly one’s childhood is swept away by the foundation of an adulthood, hastily assembled. How the lifelong quest to surpass one’s father is thrown into disorder by an untimely passing, leaving a life without center, without endpoint. The hurt of all that. You could say that ghost stories are fundamentally about the past, about unearthing a buried trauma and setting it to rest. I see my novel as an exploration of how the memory of a person, which is like a ghost in its way, can live on in the present and the future.”

“A story with real sequel potential if I’ve ever seen one. No, I’m serious,” Jay says, chuckling.

“Maybe we’ll just keep you out here with us for the long haul, you can move your family west, et cetera.”

“I still haven’t seen a copy of the script,” says Patrick casually. “I don’t know if you need me to, you know, sign off on it or anything. I’d just be curious to see what your screenwriter has done with the book.”

“Do we need him to sign off, Jay?” Brenda asks, warmly. “On the changes our screenwriter made? I don’t think so, right?”

“So maybe he can just scrounge up a copy of the script around the office?” Brenda asks. “Sometime next week? I’m sure there’ll be an extra one lying around when somebody isn’t using it.”

The two nod at each other enthusiastically.

“How are you enjoying California?” asks Jay, warmly, turning to face him.

“I think there are coyotes living in the hill behind my hotel,” replies Patrick, distracted. “In the middle of the night they cry out—they sound like hurt children.”

“They sure do,” says Brenda.

Jay nods. “It’s how we live here, I suppose, pressed up against the underbelly of the wilderness. Just last month, a deer drowned in my swimming pool. No, really. We like to joke that we should have put the pool cover on.”

“You can’t blame yourself for everything bad that happens in the world, Jay,” Brenda replies with sudden tenderness, placing a hand on his hand. “The world is a place where terrible things just happen.”

Alexandra Kleeman is the author of Intimations, a short story collection, and the novel You Too Can Have a Body Like Mine, which was a New York Times Editor’s Choice. Her fiction has been published in The New Yorker, The Paris Review, Zoetrope, Conjunctions, and Guernica, among other publications, and her other writing has appeared in Harper’s, The New York Times Magazine, Vogue, Tin House, n+1, and The Guardian. Her work has received fellowships and support from Bread Loaf, the Djerassi Resident Artists Program, the Virginia Center for the Creative Arts, and the Headlands Center for the Arts. She is the winner of the Berlin Prize and the Bard Fiction Prize, and was a Rome Prize Literature Fellow at the American Academy in Rome. She lives in Staten Island and teaches at the New School. 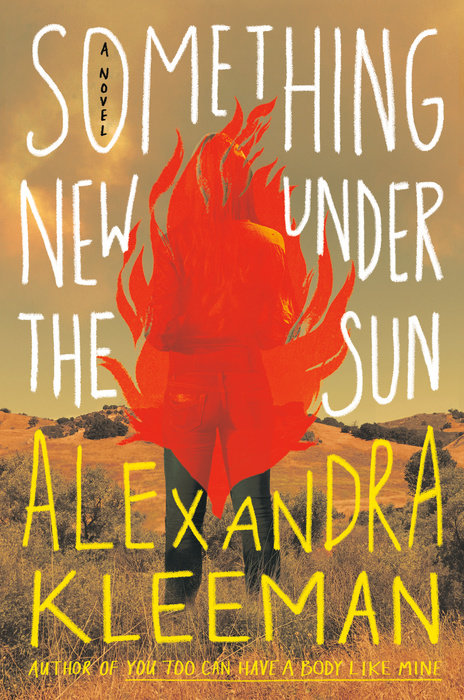