In this pivotal prequel to Star Wars: The Rise of Skywalker, the heroes of the Resistance—Poe Dameron, General Leia Organa, Rey, and Finn—must fight back from the edge of oblivion.

The Resistance is in ruins. In the wake of their harrowing escape from Crait, what was once an army has been reduced to a handful of wounded heroes. Finn, Poe, Rey, Rose, Chewbacca, Leia Organa—their names are famous among the oppressed worlds they fight to liberate. But names can only get you so far, and Leia’s last desperate call for aid has gone unanswered.

From the jungles of Ryloth to the shipyards of Corellia, the shadow of the First Order looms large, and those with the bravery to face the darkness are scattered and isolated. If hope is to survive, the Resistance must journey throughout the galaxy, seeking out more leaders—including those who, in days gone by, helped a nascent rebellion topple an empire. Battles will be fought, alliances will be forged, and the Resistance will be reborn.

Leia jerked awake, her head snapping back against the rough fabric of the headrest. Her hands grasped for purchase in the armless chair as she tried to keep herself from falling. She cried out, a small startled breath in the otherwise empty room, as her fingers clasped around the edge of the console table. It took her a moment for her senses to come back to her and for her to remember where she was. The low hum of machinery and the distant clank of someone doing repairs, even at this odd hour, told her she was on the Millennium Falcon. Not on the Raddus, during the First Order’s attack, when she had felt the presence of her son nearby. Not in the cold darkness of space into which she had been flung immediately after.

She had been dreaming just now. The same dream that had plagued her since it happened. She was alone, cold, her body failing, her spirit lost, surrounded by the vast emptiness of space. In real life she had woken, and the Force had flared hot and alive in her. And it had brought her back, guided her to safety. But in the dream, she stayed suspended in the void. Failing her friends, her family, and the people she had vowed to lead. Failing her son most of all. Everyone she loved, dead.

“When did I get so morbid?” she muttered to herself, pushing her aching body upright in her chair. She knew when. Since she had died. Well, almost died. She’d had plenty of close calls in her life. The bombing during her senatorial days back on Hosnian Prime. The torture session with Vader that even now, decades later, spiked her adrenaline and set her on edge when even the barest hint of that memory surfaced. A million narrow escapes with Han back in the days of the Rebellion. But nothing quite like being blasted out of that ship, drifting through space alone.

She rubbed a tired hand over her face, looking around. It had been a long few days since Chewie and Rey had shown up on Crait to rescue them from the First Order. Since she had seen her brother again and lost him just as quickly. She wondered how much she was supposed to suffer in a single lifetime, how much exactly one person could take. But then she put that indulgent self-pitying moment away. She had work to do.

The communications console of the Millennium Falcon was laid out before her, silent as space itself. When she had called for aid on Crait, sending out her distress signal to her allies, she was sure someone would respond. But they had not, and that fact still shook her. Were they alive? Was her signal being blocked? Or—­the answer she least wanted to contemplate—­did they just not care?

No, she wouldn’t believe that. Couldn’t. Something had happened that prevented her calls from reaching friendly ears. That made more sense than believing she and the Resistance had been so thoroughly abandoned. She would figure out what went wrong, and until then, she would keep trying.

She reached for the communications rig just as the speaker in her headphones buzzed to life and a green light blinked, signaling that a transmission was waiting. Her heart ticked up in anticipation. Someone was trying to reach the Millennium Falcon. She slid the headphones on, adjusting the mike as static rained through the connection. Without the sensor dish, the Falcon’s subspace radio signal was scratchy at best.

She punched in the encryption code, opening the channel to whoever was on the other end and had known the code as well.

“Hello?” she whispered anxiously into the mike. “Who is this?”

A small flutter of defeat flickered in Leia’s stomach. She had hoped it would be one of the Resistance allies, a powerful government offering refuge or ships or other aid. But it was the girl she had met directly after the destruction of Starkiller Base, the daughter of Iden Versio and Del Meeko. She remembered Zay well. Her parents had both been Imperials-­turned-­rebels, her grandfather the notorious Admiral Garrick Versio. The girl had lost both parents, had already been through so much at so young an age. Well, hadn’t they all? Leia certainly had. It was the nature of war, to put its children through hell, to murder their parents.

“Stop!” she told herself loudly, her voice echoing around the room.

“What?” Zay asked, through the static.

“Not you,” Leia said hastily. “I didn’t mean you.” How embarrassing. Leia shook off her malaise and pressed the headphone to her ear, leaning into the mike. “Say it again, Zay. I’m having trouble hearing you. You’re breaking up.”

Leia smiled good-­naturedly at the girl’s exaggerated overcorrection. “I can hear you fine now. Speak normally.”

“Oh yeah? So, we tracked down some old friends of my mother who were Imperials but have renounced and have no love for the First Order. We’re going to pay them a visit, if that’s okay with you. It will take another three or four standard days, at least.”

“What happened to the Resistance allies I asked you to find?”

“Or at least they’re not where they should be. We’ve hit over half the names you gave us and found nothing. In some cases, whole homes just abandoned.”

“Whatever it is, General, something bad is happening.”

Leia rubbed her neck, feeling the tension locked in her muscles. More allies out of reach. Zay was right. Something was happening, and it scared Leia, too.

“Zay, I want you to keep looking. Find out what you can.”

Leia hadn’t imagined ex-­Imperials would be the allies she needed, but it looked like their options were thinning. And who knew? Zay’s mother proved that some of the fiercest rebel fighters out there had once been on the other side. People were complicated, and if there was one thing the Empire had been good at it was offering people what they thought they needed—­only for them to find out that the peace and order they desired came at too high a price. Leia would never hold someone’s past against them. She had enough demons in her family tree to guarantee she was not one to judge.

On the other end, Leia heard muttering and muffled arguing, as if someone had placed their hand over the mike. After a moment, Zay came back.

“Shriv says you should trust us. After all, what could go wrong?”

What, indeed? “All right, if Shriv agrees that the ex-­Imperial leads are solid, go ahead and extend your mission. But be careful. There’s . . . ​it’s not safe to go up against the First Order.” Like the girl with the dead mother didn’t know that.

“Not a problem, General. We’ll use caution.”

More muffled muttering. “Oh, and Shriv says ‘Careful’ is his middle name. Plus, he’s not dead yet, so somebody or something out there must be looking out for us.”

“Yes,” Leia said quietly to herself, and then into the mike, “May the Force be with you, Inferno Squad.”

Leia pressed the button to end her connection and leaned back. She hoped she hadn’t given the girl too much responsibility too soon. Zay couldn’t be many years older than sixteen, but at sixteen Leia was already fomenting the Rebellion. If anyone knew that youth could be underestimated, it was her. No, Zay was strong, smart. Capable. And with Shriv as a steadying force, she trusted they’d complete the mission.

A sharp pain in her temple brought Leia’s thoughts up short. She squeezed her eyes shut in sudden agony. These headaches were a side effect of the healing process, the medical droid had said. She was to expect them to last for a few weeks, but between the headaches, the nightmares of being lost in space, and the grief of losing her friends and family, Leia was exhausted. What she wouldn’t give for just a moment of relaxation, of safety; a few days or even a handful of hours of knowing everything would be all right.

Rebecca Roanhorse is a Hugo, Nebula, and Locus Award–winning speculative fiction writer. She also won the Campbell Award for Best New Science Fiction and Fantasy writer in 2018. Her novel Trail of Lightning is the first book in the Sixth World series, followed by Storm of Locusts in 2019. She lives in northern New Mexico with her husband, daughter, and pug. 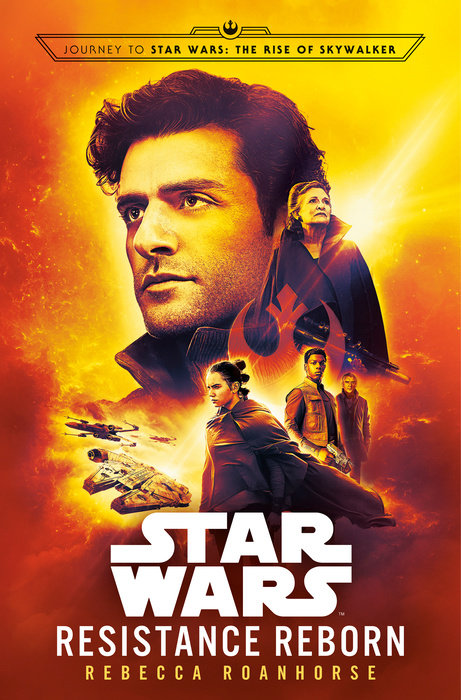