A young pilot risks everything to save his best friend—the man he trusts most and might even love—only to learn that his friend is secretly the heir to a brutal galactic empire.

Ettian’s life was shattered when the merciless Umber Empire invaded his world. He’s spent seven years putting himself back together under its rule, joining an Umber military academy and becoming the best pilot in his class. Even better, he’s met Gal—his exasperating and infuriatingly enticing roommate who’s made the academy feel like a new home.

But when dozens of classmates spring an assassination plot on Gal, a devastating secret comes to light: Gal is the heir to the Umber Empire. Ettian barely manages to save his best friend and flee the compromised academy unscathed, rattled that Gal stands to inherit the empire that broke him, and that there are still people willing to fight back against Umber rule.

As they piece together a way to deliver Gal safely to his throne, Ettian finds himself torn in half by an impossible choice. Does he save the man who’s won his heart and trust that Gal’s goodness could transform the empire? Or does he throw his lot in with the brewing rebellion and fight to take back what’s rightfully theirs?

Features an excerpt from Book Two of The Bloodright Trilogy, Oaths of Legacy

“Skrutskie’s Bonds of Brass is a high-octane galactic adventure replete with heart, drama, and a keen edge of pain.”—Caitlin Starling, author of The Luminous Dead

“Full of breathless action and dazzling characters, Bonds of Brass is space opera at its most exciting.”—Adam Christopher, author of Stranger Things: Darkness on the Edge of Town

An excerpt from Bonds of Brass

The human mind isn’t built to process hurtling through a vacuum at skin-peeling speeds in a cockpit just big enough for a single pilot and all of his fear. The Viper around me is sleek and athletic, and the engines at my back roar as I urge a little extra speed out of them. The vast dark of space envelops me, the stars washed out by the daytime glow of Rana five hundred miles beneath us. I should be pissing myself.

My mind goes a little inhuman in the cockpit of a Viper. My awareness pushes its limits, my body forgotten in favor of the ship around me. My eyes unfocus. My heartbeat steadies. Any residual anxieties vaporize in the void, yielding to the immediacy of flying, and instinct takes over the way my hands twist and pull the craft’s controls. The readouts spit information about the vector my ship is sailing on, but I don’t need it.

All I need is the feeling. That’s what keeps me in formation as we sweep through the black. The distance between each ship is measured, but instinct is what holds us there.

“This is Gold One. Execute first maneuver,” I announce to the comm.

I fire the attitude thrusters, pulling my nose up. My Viper’s engine drives a frantic tattoo into my spine. The burn is silent outside the craft, deadened by the vacuum, but inside my radio goes live. Thirty Vipers fill with the howls and whistles of cadets being jammed down into their gel-seats by the vicious inertia.

The glowing curve of Rana eases into view and then slides back out as we complete our arc and level off. At the edge of my vision, I catch the shine of Viper noses as the rest of the formation follows my lead. “Gold Twenty-Eight, get that vector straightened out,” I grumble as one of them lists off-track.

My teeth set on edge, but I can’t help the smile that tugs the corners of my lips. I’ve given up on trying to get Gal to use call signs during exercises, and so has most of the senior staff—though they certainly won’t cut me any slack for letting him get away with it. His Viper jerks in my periphery, settling shakily back into formation.

“No apologies, Gold Twenty-Eight. Get it right.” It’s hard to say with a straight face, and I can picture the way Gal’s smirking in his own cockpit. “Rest of you, this is Gold One. Execute second maneuver.”

I close my eyes and spin up my gyros with a twist of the controls. I could flip my Viper with a preset, but where’s the fun in that? Pure instinct sends my craft end over end—540 degrees, for show—and pure instinct fires the engines at the right moment, the attitude thrusters locking the Viper straight along the inverse of its former vector as the main burn kicks, driving me into my seat with the force of a missile strike.

That pure instinct is why I’m Gold One.

“Ruttin’ showoff,” Gal mutters over the comm, and bursts of laughter snap through from the other pilots.

“Jealous bastard,” I shoot back, and Gal chuckles.

“Keep it professional, Ettian,” he warns.

“Cut the chatter, Gold Twenty-Eight,” I reply, but he knows I’d rather he didn’t. Even though this is technically my drill and I should be keeping things serious, these flight exercises are a formality. Rana’s Imperial Academy is a playground, a regimen of basic training that puts us in the shoes of pilots before we graduate for the leadership tracks. In true combat, none of us would be flying Vipers. We’re destined for the command centers of a dreadnought, overseeing troops that will deploy from the cityships.

I wish it were otherwise. I prefer the Viper. In this cockpit, everything’s under my control. It’s simple and pure. I’m responsible for myself and myself alone.

Not today though. As leader of this exercise, I’m expected to keep all thirty cadets on my wing under control. Even with the Viper demanding my attention, a part of me pulses with constant awareness that the senior staff will be watching every move I make. They can excuse some friendly chatter, but if anything serious goes sideways, it’s my hide on the line. I know for certain some of the officers aren’t thrilled about an Archon whelp holding steady at the top of our class, and they’re just waiting for an excuse to rip my command away.

“This is Gold One. Execute—”

“Wraith Squadron, detach,” a familiar voice announces, cold and clear. A single fighter peels off the back of our formation.

Wraith? My gaze drops to the Viper’s instruments. “Seely—Gold Eight, what the hell are you doing?” I snap. “This is Gold One, and I do not authorize whatever—”

A shriek of static cuts through the radio, and in my periphery, nineteen more Viper hulls fall away. Something goes fuzzy in my brain as I watch my control dissolve. My formation flies on, cut by two-thirds, holes torn in its former perfection. This can’t be happening. Why is this happening? Sure, Seely hates me, but how in any system’s hell did he convince nineteen of our classmates to ruin my drill? There’s no way the bitter little rutter has that much clout.

My heart rate doubles, my mind reeling as I try to inventory which fighters have fallen back. At my left, I spot the glint of sunlight off a Viper’s nose—Gal’s Viper. He’s still with me.

“This is Wraith One. Form up on me,” Seely announces.

“Seely, what the hell is going on?” I shout, wrestling with my controls. Another spin of the gyros flips my Viper around, pointing me at the stray flock as I continue to sail backward in what’s left of my formation.

They’re shifting into an arrowhead. An attack pattern. My mouth goes dry. This isn’t disobedience. This isn’t just to stick it to me. This is something more. Something worse.

Seely’s voice overpowers the line, full of authority I never suspected him of possessing. “Wraith One, authorizing weapons free.”

Every lesson I’ve ever had about leadership under pressure crystalizes in my mind. “Gold One, evasive action immediately,” I scream at what’s left of my fighters. The Vipers split like they’ve been cleaved by a knife.

All except for Gal, who bolts across the black with no regard for pattern, for order, for any sort of direction that might save his ass.

Something in his brain has gone animal. Not the pack-animal mentality you sometimes slip into when you’re flying in formation. No, Gal’s just doing everything in his power to run.

“Heavens and hells,” I swear, twist out of formation, and take off after him. The comms go live with confusion, the other pilots uncertain whether they’re supposed to follow me.

Above the chatter, Seely’s voice comes through loud and clear: “This is Wraith One. Shoot to kill.”

I throw everything I have into the engines as the vacuum around me comes alive with the flash of boltfire. Gal swerves erratically, and my heart leaps into my throat as one of the bolts skims his Viper’s wing. I hazard another glance at my instrumentation. Watch as the twenty defectors point their arrowhead directly at Gal’s retreating tail. Not at the remaining nine Vipers holding formation as they flee across the black.

“What the rut do you think you’re doing?” I seethe through my teeth. I watch Gal on the instruments, my face heating with fury as another burst to the engines drives me deeper into my seat. This isn’t the Gal I know—the Gal I’ve known for years, the one who pranks the senior staff, who struggles to keep even the most stalwart ships flying steady, who doesn’t fear anything the way he should. Something’s terribly wrong.

My calm evaporates into the vacuum.

Emily Skrutskie was born in Massachusetts, raised in Virginia, and forged in the mountains above Boulder, Colorado. She attended Cornell University and now lives and works in Los Angeles. Skrutskie is the author of Bonds of Brass, Hullmetal Girls, The Abyss Surrounds Us, and The Edge of the Abyss. 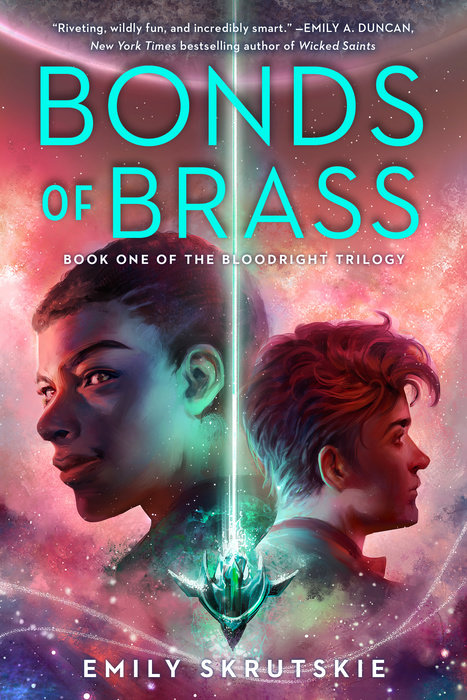