Being American in the World We've Made

NEW YORK TIMES BESTSELLER • Why is democracy so threatened in America and around the world? And what can we do about it? A former White House aide and close confidant to President Barack Obama—and the author of The World as It Is—travels the globe in a deeply personal, beautifully observed quest for answers.

In 2017, as Ben Rhodes was helping Barack Obama begin his next chapter, the legacy they had worked to build for eight years was being taken apart. To understand what was happening in America, Rhodes decided to look outward. Over the next three years, he traveled to dozens of countries, meeting with politicians, activists, and dissidents confronting the same nationalism and authoritarianism that was tearing America apart. Along the way, a Russian opposition leader he spoke with was poisoned, the Hong Kong protesters he came to know saw their movement snuffed out, and America itself reached the precipice of losing democracy before giving itself a second chance.

Part memoir and part reportage, After the Fall is a hugely ambitious and essential work of discovery. In his travels, Rhodes comes to realize how much America’s fingerprints are on a world we helped to shape, through our post–Cold War embrace of unbridled capitalism and our post-9/11 nationalism and militarism; our mania for technology and social media; and the racism that fueled the backlash to America’s first Black president. At the same time, Rhodes learns from the stories of a diverse set of characters—from Barack Obama himself to Cuban rebels to a rising generation of international leaders—that looking squarely at where America has gone wrong makes clear how essential it is to fight for what America is supposed to be, for our own country and the entire world.

An excerpt from After the Fall

The Currents of History

From the moment I was deposited back into civilian life after the Trump inauguration, I felt compelled to get away from what was happening in America. To emerge bleary-­eyed from some international flight, change currency in the baggage claim, and walk into blinding sunlight and the cacophony of voices speaking another language along the curbside—­men smoking in soccer jerseys, clustered around a metal pole—­was to be reminded that life went on despite the sense of hostage taking that afflicted my homeland. It was a form of self-­imposed exile. And yet, in each locale, there was the discovery that the same thing was happening everywhere.

In March 2017, I went to Myanmar to help the government there prepare for peace negotiations with a patchwork of provincial ethnic groups who had been waging civil war for decades. Diplomacy, it turned out, was privatized like everything else. I would be an independent contractor for a British-­based nongovernmental organization (NGO) led by Jonathan Powell, who had served as chief of staff for Tony Blair. Powell had led the negotiations to secure the Good Friday Accords that secured peace in Northern Ireland in the late nineties. Ever since, he’d become something of a globe-­trotting private peacemaker from Africa to Latin America to Southeast Asia, a figure out of a Graham Greene novel meeting rebels in jungles and deserts, seeking to recapture the accomplishment of his career’s high-­water mark. Perhaps because I was newly admitted into the ranks of former officials, it seemed no surprise to Powell or his staff that I wanted to get to Burma a little early to unwind. We were trying to help end wars, but we were also dealing with our own private ones.

For a couple of days, I walked aimlessly around the sprawling city of Yangon, a blanket of heavy heat over me, buying knock-­off Nikes for a few bucks to make it easier on my feet. I went to a pagoda and sat staring at a Buddha, waiting to feel something. I walked into a U.S.-­government-funded library where I’d been a guest of honor a couple of years before, now anonymous to young Burmese buried in books and screens. Then I conducted workshops in the capital city of Naypyidaw to help the Myanmar negotiating team prepare, sharing lessons I’d learned while negotiating reconciliation between the United States and Cuba. The civilians took earnest, copious notes. The stern-­faced military men in drab green uniforms wrote nothing down. Afterward, I joined a meeting with Aung San Suu Kyi, dissident turned state councilor, at her residence. For the first time in my several meetings with her, we were asked to take off our shoes inside the Buddhist home, a reminder of the Burmese Buddhist nationalism that had become more predominant in recent years.

Within a matter of months, the Burmese military that had once imprisoned Suu Kyi would pursue a campaign of ethnic cleansing against a Muslim minority, the Rohingya. A million people were driven into neighboring Bangladesh. Through it all, Suu Kyi would remain silent. People wondered at her fall from Nobel Peace laureate of the early nineties to international pariah. But it made a certain kind of sad sense to me. A survivor from a country on the periphery of power in the world, she once surfed the wave of democracy that accompanied the end of the Cold War. She rocketed to international attention in 1989, the year that the Berlin Wall came down, by leading a democratic movement protesting the military government. By 2017, she was doing what she felt she needed to do to survive in a world where nationalism ran amok. Her own journey—­from democracy icon to tacit collaborator in brutality fueled by Buddhist nationalism and rampant anti-­Rohingya disinformation on Facebook—­didn’t cut against the currents of history, it drifted in the wake of events in the wider world.

In April 2017, I went to Milan with Barack Obama. He was there to speak about climate change a few weeks after Donald Trump pulled out of the Paris Climate Agreement. The rhythm of the trip felt familiar: a private plane, a block of hotel rooms, Secret Service agents. But the plane was a fraction the size of Air Force One, there were only a handful of hotel rooms and agents, and unlike the crush of responsibilities that used to follow me, I had very little to do. I accompanied Obama on a private tour of Leonardo da Vinci’s drawings, peering down at bold lines that improbably anticipated the machines of the future—­helicopters and missiles, the machinery of war that we’d presided over for eight years. Dusty volumes hundreds of years old lined the walls of the library. From human creations like this the Renaissance had emerged, paving the way for the pursuit of scientific inquiry and cultivation of a more enlightened Western civilization that now felt under assault. Back at the hotel, throngs of Italians waited outside Obama’s hotel. I told him that he remained the most popular politician in the world. “No,” he corrected me, “I’m one of the biggest celebrities in the world now.” He didn’t mean it as a good thing—­progressive change relegated to cultural celebrity.

In July 2017, I went to Cuba. I stayed at the sprawling Hotel Nacional in the heart of Havana. Black-­and-­white photos of the Castros with visiting dignitaries and celebrities, vestiges of Cold War history, hung in the lobby. I met a friend from the American embassy for drinks at the outdoor bar, the kind of place that you assume has been populated by revolutionaries and spies for the last several decades. In a hushed voice, my friend told me about a mysterious illness that had struck employees of the embassy. There were theories about “sonic attacks,” but the source would never be firmly established. It felt to us like something the Russians might do—­people who wanted to sow conflict, drive others apart, put America and Cuba back into the Cold War that I thought we had ended.

A couple of days later, I flew to Santiago, where the Cuban Revolution had begun. I felt sicker than I could remember ever having been—­a throbbing headache, ringing in the ears, repeatedly (and not always successfully) suppressing the urge to vomit. Was it food poisoning, or something else? I was shown around the revolutionary sites by an eager guide. A museum that documented the crimes of the prerevolutionary, U.S.-­backed Batista government felt several historical epochs out of date, and so did the Cuban Revolution. I was driven into the countryside, almost two hours on roads at times blocked by mangy herds of animals, my stomach doing flips with every bump. We came to a secluded cemetery in the mountains, the place where the revolutionaries had become guerrillas. It was lush and peaceful, the only sounds coming from the birds and the breeze through the trees. An old man who’d fought with the Castros showed me around, his tour culminating at the site where Raúl Castro would be buried. I looked at the tomb with Raul’s name already etched into it; this was a man who wanted to be remembered in the place where he had been young, when it was all still a cause uncorrupted by power and the passage of time.

Back at the Nacional the next day, I lay on my bed staring at the ceiling and having a conversation in my head. Had we misled all of these people, from the Cubans who wanted to move beyond the past, to the Europeans who saw America as a guarantor of democracy, to the Burmese who wanted democracy for themselves? People who had trusted us, only to be burned. Or were we always pushing against inexorable forces, the hard-­line Cubans who clung to power with Russian backers, the nationalists trying to unravel the European Union, the Burmese military who wanted a nation for Buddhists? Was the dark turn I sensed everywhere I went a cause of America’s nationalist, authoritarian turn, or was America merely following the same turn happening everywhere, caught in the current of history like a piece of driftwood?

This question continued to roll around in my head, from continent to continent. In Kenya, an American diplomat told me the Chinese were methodically supplanting American influence—­buying up businesses and media, courting the students who no longer felt welcome in the United States. In Singapore, a senior government official told me casually over drinks that Asia had moved on from America—­speaking as if this gleaming capitalist construction had almost been seamlessly handed off to the Chinese. In Amsterdam, Obama and I toured the empty Anne Frank house at night, peering into the small rooms where she’d penned her diary, the absence of tourists lending the place a feeling of having been forgotten.

In country after country, people asked me searching questions about how Trump could have happened. In Europe, Trump was often tied to the British vote for Brexit and the refugee crisis of 2015, the fears of Muslim hordes invading our open societies. But this theory, I felt certain, was wrong. It diminished the more structural, consequential forces at work everywhere I went, forces that had been building for a long time. No, this wasn’t some black swan event, easily explained by a couple of years’ worth of scary headlines. It ignored the lived reality of the eight years that I worked in the White House, the feeling that a cancer was metastasizing everywhere despite our efforts to treat it. It conveniently elided the ways in which decades of American capitalism, technology, and the politicized pursuit of national security had ripened so many people in the United States and around the world for crude nationalist appeals.

Ben Rhodes is the author of the New York Times bestseller The World as It Is, co-host of Pod Save the World, a contributor for NBC News and MSNBC, and an adviser to former president Barack Obama.

Being American in the World We've Made 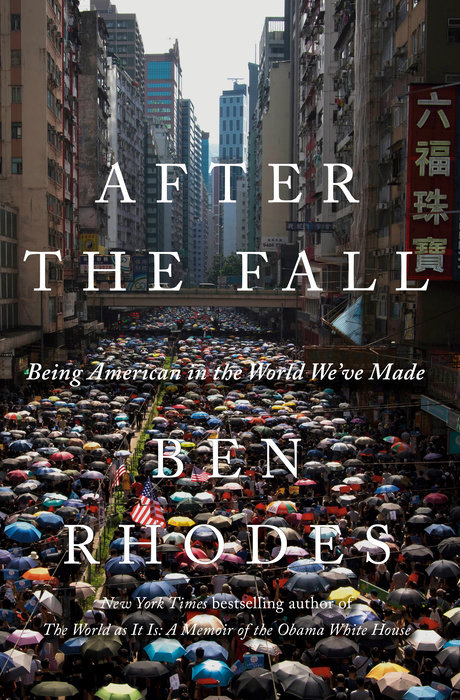