A sweeping, lyrical debut about the love and longing between humanity and the earth itself, by a major new literary talent from India

“A marvel of magical realism.”—O: The Oprah Magazine

A spellbinding work of literature, Latitudes of Longing follows the interconnected lives of characters searching for true intimacy. The novel sweeps across India, from an island, to a valley, a city, and a snow desert, to tell a love story of epic proportions. We follow a scientist who studies trees and a clairvoyant who speaks to them; a geologist working to end futile wars over a glacier; octogenarian lovers; a mother struggling to free her revolutionary son; a yeti who seeks human companionship; a turtle who transforms first into a boat and then a woman; and the ghost of an evaporated ocean as restless as the continents. Binding them all together is a vision of life as vast as the universe itself.

A young writer awarded one of the most prestigious prizes in India for this novel, Shubhangi Swarup is a storyteller of extraordinary talent and insight. Richly imaginative and wryly perceptive, Latitudes of Longing offers a soaring view of humanity: our beauty and ugliness, our capacity to harm and love one another, and our mysterious and sacred relationship with nature.

An excerpt from Latitudes of Longing

Silence on a tropical island is the relentless sound of water. The waves, like your own breaths, never leave you. For a fortnight now, the gurgle and thunder of clouds has drowned out the waves. Rains drum on the roof and skid over the edge, losing themselves in splashes. Simmer, whip, thrum, and slip. The sun is dead, they tell you.

Seeded in the sounds is an elemental silence. The quietness of mist and the stillness of ice.

The newly married Girija Prasad and Chanda Devi have resigned to their fate—strangers in a bedroom damp with desire and flooded with incipient dreams. And Girija Prasad dreams furiously these days. For the rains are conducive to fantasies, an unscientific truth.

One night, when the downpour suddenly stops, it wakes him up. His ears had adjusted to the tropical cacophony like a spouse to a snoring partner. Rising from a wet dream, he wonders what happened. Who left the room?

He peeps down from his queen-sized bed to Chanda Devi’s rustic mattress on the floor, where she sleeps facing the open window instead of him. Aroused, he gazes at the curves of her silhouette in the darkness. When the two of them were united for several births by walking around the sacred fire seven times during their wedding ceremony, she followed his footsteps meekly, firm in her conviction that destiny had brought them together once again in a new avatar. Yet in this avatar, he would have to find a place in her heart once again. “Until then,” she informed him on the first night, “I will make my bed on the ground.”

She’s wide awake, distraught because of the accusatory cries emanating from the other side. It is the ghost of a goat. The ghost escaped countless realms to come wander on their roof. And now its restless hooves have descended to stand under the open window, filling the room and her conscience with guilt.

“Can you hear it?” she asks. She can feel his eyes on her back.

“The goat bleating outside.”

His forlorn erection withers away. He’s alert now to Chanda Devi and the predicament she poses.

“There’s no goat roaming in our house,” he replies in exasperation.

She sits up. The bleating has grown louder, as if to tell her to convey to her dreamy husband, “You took away my life, but you can’t take away my afterlife, you sinful meat-eater!”

“It’s just outside our window,” she tells him.

“Does it scare you?”

“Are you threatened by this goat?”

“Then perhaps you could ignore it and go back to sleep.” He meant to say “should” and not “could,” but he doesn’t have the courage to be stern. His wife, he has realized, doesn’t respond well to dialectics or coercion. In fact, she doesn’t respond well to most things. If only she were less attractive, he could have ignored her and gone back to sleep.

“How can you sleep?” she asks. “You hacked the innocent creature, minced its flesh, deep-fried it with onions and garlic, then ate it. And you left its restless soul to haunt our house!”

If the souls of all the various kinds of animals he had consumed returned to haunt him, his home would be a zoo and barn combined, leaving no space to move, let alone sleep. But mild-mannered Girija Prasad cannot say that. Two months into his marriage and he’s resigned to his wife’s fecund imagination. It is a willful act of hope, attributing her behavior to her imagination and not some mental illness. For the sake of his unborn children and the decades they have to endure together, he announces, “If it helps you sleep, I will stop eating meat.”

That’s how carnivorous Girija Prasad turns vegetarian, much to his wife’s and his own surprise. For the sake of a few hours of rest, he says goodbye to scrambled eggs, mutton biryani, and beefsteaks forever.

At the first hint of sunrise, she leaves her bed. She enters the kitchen to prepare an elaborate breakfast. There is new life in her movements and a smile lurking in her silence. Now that the killings have stopped, it’s time to stretch out a white flag in the shape of aloo parathas. Two hours later, she serves them to him and asks, “How are they?”

Girija Prasad can’t help but feel unsettled, and for all the wrong reasons. The sun is finally out. His wife, who has cooked him breakfast for the first time, has been bold enough to place a napkin on his lap, brushing past his shoulders, spilling her warm breath on his skin. He craves the comfort of grease mixed with flesh, but he can’t find it on his plate.

“How are they?” she asks him again.

“Who?” he asks, disoriented.

She smiles and pours him a second cup of tea.

Chanda Devi, the clairvoyant one. She feels for ghosts and enjoys the laconic company of trees. She can sense them, his unexpressed cravings. But she knows he is better off giving up flesh. The kingdom of flesh is as ephemeral as it is unreliable, especially when compared to the kingdom of plants. Chanda Devi has seen it all, even the rivers of blood that will drain out of her body one day. It makes her obstinate, this knowledge. It makes her a demanding wife.

When Girija Prasad went to Oxford, it was the first time he had left his home in Allahabad by himself. After a four-day journey in horse carriages, ferries, and a train, when he finally sat on the ship that would carry him to England, he’d abandoned jars of pickle, ghee parathas that could outlive human beings, images of assorted gods, and pictures of his family, including a portrait of his mother that he had painted himself.

While he was relieved to leave the gods behind—especially Rama, the dutiful son who left his wife for no good reason, and the riverbank baba who was no god, just a senile, starving man—discarding his mother’s portrait had seemed impossible to do without breaking down. But so would staring at her face, oceans away. To face the separation, he would have to start a new life. A violently different one, the mere thought of which gave him piles. Lost in an unending ocean, he spiraled into a shell of silence. Stillborn tears expressed themselves as stubborn constipation. A diligent documenter of the plant kingdom, Girija Prasad carried kilos of isabgol husk for this very purpose. He also carried dried tulsi, neem, ginger, powdered turmeric, cinnamon bark, and ground pepper to counter other physical ailments. When he arrived at Dover, the customs officials mistook him for a smuggler of spices.

Within a day of his arrival at Blimey College, Oxford, Girija Prasad Varma became “Vama,” christened thus by tutors untrained in Hindu names. On the very first evening, he tasted alcohol for the first time and also broke the generations-old taboo of consuming things jhootha, or “contaminated by the mouth of another.” When the colossal mug of beer was passed around among the freshers, he was presented with two options: embrace this culture wholeheartedly or languish forever at the crossroads. There were no portraits or deities on his desk to admonish him. The next morning, he would taste eggs for the first time, nudging at the globe of salty yellow with his fork, watching it quiver. He would soon acquire a taste for how complex and unpredictable life could be.

Girija Prasad Varma, India’s first Commonwealth scholar, came back home after five years with a doctorate thesis that he concluded with two native words: Jai Hind. “Victory to the Indian nation” is how he translated the words for his supervisor. At the behest of the young prime minister of India, he was tasked with setting up the National Forestry Service in the first year of independence, 1948.

Most evening conversations among the tea-drinkers in Allahabad involved far-fetched theories linking them to the illustrious bachelor. But why would he choose to be posted to the Andamans, the aunties wondered, a place known only for exiled freedom fighters and naked tribes? It was rumored that there wasn’t a single cow on the island and that people had to resort to drinking black tea.

One of the tea-drinkers, a gold medalist in mathematics and Sanskrit, Chanda Devi, was relieved. Her medals clutched her like a chastity belt. Only a man more qualified would dare marry an intelligent woman. If she could have had it her way, she would have married a tree. She disliked men and women equally, meat-eaters even more, beef-eaters the most. But in 1948, even misanthropes were married off, if only to increase their tribe.

Shubhangi Swarup is a writer and educator. Latitudes of Longing, her debut novel, was a bestseller soon after its release in India. It won the Tata Literature Live! Award for debut fiction, was shortlisted for the JCB Prize for Indian Literature, and longlisted for the International Dublin Literary Award 2020 and the DSC Prize for South Asian Literature. She was awarded the Charles Pick Fellowship for creative writing at the University of East Anglia, and has also won awards for gender sensitivity in feature writing. She lives in Mumbai. 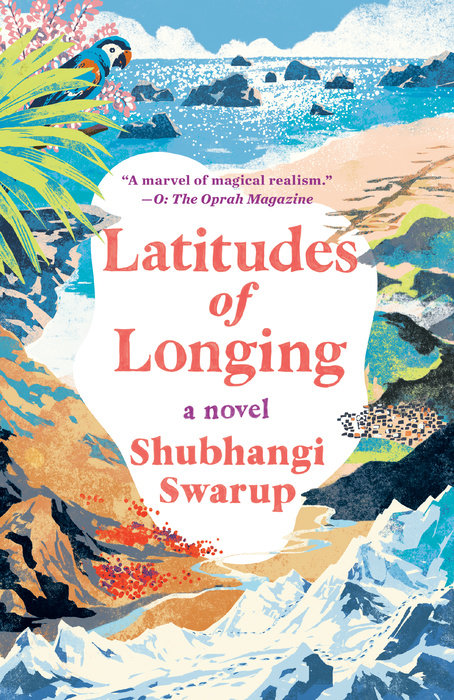