A Story of Justice and Power

Philadelphia’s progressive district attorney offers an inspiring vision of how people can take back power to reform criminal justice, based on lessons from a life’s work as an advocate for the accused.

“Larry Krasner is at the forefront of a movement to disrupt a system. This is a story that needs to be read by millions.”—Bryan Stevenson, author of Just Mercy

Larry Krasner spent thirty years learning about America’s carceral system as a civil rights and criminal defense lawyer in Philadelphia, working to get some kind of justice for his clients in a broken system, before deciding that the way to truly transform the system was to get inside of it. So he launched an unlikely campaign to become the district attorney of Philadelphia, a city known for its long line of notorious “tough on crime” DAs who had turned Philly into a city with one of the highest rates of incarceration in the country. Despite long odds and derisive opposition from the police union and other forces of the status quo, Krasner laid out a simple case for radical reform and won the November general election by a margin of nearly 50 percent.

For the People is not just a story about Krasner’s remarkable early life as a defense lawyer and his powerful, grassroots campaign; it’s also a larger exploration of how power and injustice conspired to create a carceral state unprecedented in the world. Readers follow Krasner’s lifelong journey through the streets and courtrooms and election precincts of one American city all the way up to his swearing-in ceremony to see how our system of injustice was built—and how we might dismantle it.

In the tradition of powerful critiques of the criminal justice system, from Bryan Stevenson’s Just Mercy to Michelle Alexander’s The New Jim Crow, For the People makes the powerful case that transforming criminal justice is the most important civil rights movement of our time and can only be done if we’re willing to fight for the power to make a change.

An excerpt from For the People


For thirty years of my career, I did the kind of work that makes you unelectable, or so the political insiders say. Voters said something else.

I was in the dark, holed up in the control booth of a television studio in Philly’s public access television station, getting ready to announce my candidacy for district attorney. At fifty-six, I’d spent my career in court as a criminal defense and civil rights trial lawyer. I had tried and won a lot of cases. I got some justice for a lot of individuals, but that justice was never quite ideal. It was unbalanced, incomplete, and unsatisfactory. Even the wins showed me that the system needed to change. But as I tried case after case and the decades passed, the system didn’t change. It was only getting worse. Our city was one of the most jail-happy cities in the most incarcerated country in the world. Too many serious crimes went unsolved, especially when the victims were powerless. In one area of concentrated poverty in Philly, the solve rate for shootings was only 15 percent. And, rather than being cared for and supported, too many victims were used for political purposes. Day after day, driving around Philadelphia, I saw for-sale signs on too many of our public school buildings. For years, while visiting clients in custody and their families in their homes I kept wondering why jails and prisons and new courthouses just kept growing like an unchecked tumor, while the things we all needed fell apart. The problem behind it all was the criminal justice system. We were coming together that day, to change it.

It was February 8, 2017, only ninety-eight days before the primary election, the only election that mattered in a one-party town like Philadelphia. The incumbent district attorney, Seth Williams, was in trouble: He was under federal investigation for improperly accepting gifts he didn’t declare, possibly in exchange for special treatment in his handling of cases as DA. His potential indictment had drawn into the race five other candidates willing to challenge him. I knew most of them well—and, as always in Philly district attorney races, the challengers were like the incumbent—predictable, conventional, connected. None of them was a real reformer, regardless of what they claimed. I was frustrated by the lack of change in the system—by the never-ending squandering of lives and resources. So, despite my dislike for politics, I decided I had to run for DA, at least as my own kind of protest. Yes, my team and I wanted to win. But more than that, we had to speak the truth as we saw it. At least our platform might move the conversation.

I hadn’t found the light switch yet in a room full of switches and controls. Sitting in darkness, I looked through the glass that separated the control room from the brightly lit, black box studio. The studio was starting to fill up with my people, many of them activists I had defended for free over the years.

“My people” looked powerless to others. They were anything but powerless. They had fought AIDS, fought for disability rights, were disabled themselves, gave out clean needles under elevated train tracks, did pirate radio, were advocates for homeless people or were homeless themselves, said their Black lives mattered, worked to end global warming, were queer, camped out with Occupy, fought pollution, opposed casinos, wanted peace, were sex workers fighting to be safe, were addicted to drugs and seeking treatment, were clergy who shut down dirty gun shops with hymns. Or they weren’t activists at all, but they cared deeply and found ways to support the ones risking arrest. I admired them all for having already changed the world with their selfless pursuit of justice and for aspiring to do more.

At some point, I had begun to refer to the activists and organizers I usually represented for free, or to people in their worlds I respected who provided support for their work, as “my people.” I used the phrase to mean they were doing God’s work, fighting the good fight, willing to sacrifice so that others would be okay. “My people” and I weren’t the same. I didn’t control or possess them any more than they possessed me when I did their legal work for free. But we were a team of people who wanted the same things: We wanted fairness, equality, freedom, the protection we deserved from our government rather than its contempt, justice for marginalized people. We liked to knock down bullies and to speak about it as the Constitution mandated we had the freedom to do.

Sometimes when I referred to “my people,” they were under my umbrella; other times I was under theirs. The phrase was meant to be humorous. It was meant to be ironic, to highlight that we were starkly different but somehow together. “My people” was the only tribal claim I liked—a descriptor for a group of people whose basic belief in equality made them skeptical of division and tribalism. My people were a tribe that could include everyone; call them an anti-tribe. As I looked around the studio, I saw my people, but there wasn’t a politician in sight. That was fine by me.

My people were outsiders, but they were the opposite of powerless. Activists are more than people yelling in the street and blocking traffic. They are often visionaries who see the future we need before the rest of us see it. At their best, they are a fascinating bunch of theorists and communicators who catalyze change. They’d taught me that being outside the narrow halls of traditional power doesn’t mean you’re powerless—that power doesn’t just take one form. Power can wear a badge or a black robe, but it can also be nothing more than a courageous voice. Power can be any of us.

A few days prior, I had sent out a couple hundred deliberately vague text messages to my people, inviting them to “an announcement.” A mild buzz of speculation had followed among the invitees and the few press members who showed up, but most of them had no idea what I would announce.

I concentrated on the typewritten outline of my speech while I paced, whispering my way through several minutes of a solo rehearsal. Each time I rehearsed, it sounded okay until it didn’t. Then I stopped and drew arrows to change the sequence of phrases or add one or change a word. A couple of times I scratched out my new edits. The original sounded better. Then it didn’t.

Lisa, my life partner of more than thirty years, wasn’t there, even though she was the one who’d taught me what I knew about electoral politics. Almost twenty years earlier she had gotten herself elected judge as an insurgent candidate, against all odds. But now, as a sitting judge, she was required to stay away from politics, including my announcement. It would have been nice to see her eyes through that glass, on the inside of the studio. I checked my watch and noticed a couple of my fingernails were slightly chewed, which usually happened when I was mid–jury trial on a heavy case. The seeming impossibility of my risky choice to run for district attorney weighed on me.

For a minute, I was a broke thirteen-year-old again, wearing secondhand clothes and riding in the back seat of a squeaking, rusty car with my much older parents. For a minute, I felt slight and ridiculous again, was afraid of being laughed at and dismissed, was in that back seat dreaming of something bigger with no basis for believing it would ever come. My speech needed to turn everything I knew from a thirty-year criminal justice career into a ten-or-so-minute platform that was short enough for social media but long enough to explain our plan for reforming criminal justice in Philadelphia. A few other major cities had already elected some amazing progressive prosecutors, enough to create a nascent national movement. Now it was Philly’s turn to try to join that movement. Win or lose, there would be consequences for my family and for me.

Life was not going to be easy if I lost.

A Story of Justice and Power 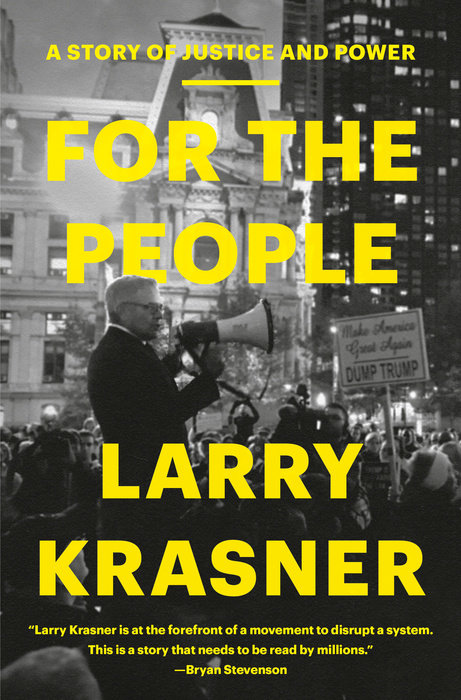