“This is Dickens in the present tense, Dickens for the twenty-first century.”—Roddy Doyle, The New York Times Book Review

An Irishman in nineteenth-century England is forced to take sides when his nephew joins the bloody underground movement for independence in this propulsive novel from the acclaimed author of The North Water.

Manchester, England, 1867. The rebels will be hanged at dawn, and their brotherhood is already plotting its revenge.

Stephen Doyle, an Irish-American veteran of the Civil War, arrives in Manchester from New York with a thirst for blood. He has joined the Fenians, a secret society intent on ending British rule in Ireland by any means necessary. Head Constable James O’Connor has fled grief and drink in Dublin for a sober start in Manchester. His job is to discover and thwart the Fenians’ plans whatever they might be. When a long-lost nephew arrives on O’Connor’s doorstep looking for work, he cannot foresee the way his fragile new life will be imperiled—and how his and Doyle’s fates will become fatally intertwined.

In this propulsive tale of the underground war for Irish independence, the author of The North Water once again transports readers to a time when blood begot blood. Moving from the dirt and uproar of industrial Manchester to the quiet hills of rural Pennsylvania, The Abstainer is a searing novel in which two men, haunted by their pasts and driven forward by the need for justice and retribution, must fight for life and legacy.

An excerpt from The Abstainer

Midnight. There are field guns on Stanley Street, and timber barricades at every bridge and junction. Bright flames from a dozen watch fires glint orange off the black and boatless Irwell. Inside the Town Hall on King Street, James O’Connor knocks the rain from his bowler, unbuttons his top coat, and hangs them both on the iron hooks by the recreation room door. Sanders and Malone, and four or five others, are sleeping on palliasses in one corner. The rest are sitting about at tables playing whist, gabbing, or reading the Courier. The place has the homely barracks-tang of stewed tea and Navy Cut; there is a rack of Indian clubs and medicine balls gathering dust by the left-hand wall, and a billiard table covered over with planking in the center. Fazackerley, the duty sergeant, notices him and nods.

“There’ll be someone shows himself eventually,” Fazackerley says. “Some daft bastard full of ale. There’s always one. You wait and see.”

O’Connor pulls a chair across and sits himself down. Fazackerley half-fills a dented metal teapot with scalding water from the urn and swirls it twice.

“I’m the only Irishman awake this side of Kingstown,” O’Connor tells him. “All the others are safe in their beds doing as the priests advised and staying well away.”

“I thought your Fenian boys didn’t pay too much attention to the monsignors.”

“They pay attention when it suits them,” he says. “Much like the rest of us.”

Fazackerley nods, allows himself a smile. His face is a bristled mass of lines and planes, his eyebrows are unkempt, and his graying hair is scant and greasy. If it wasn’t for the incongruent brightness of his pale blue eyes—more like the eyes of a newborn babe or a china doll than of a man past fifty—he might look exhausted, gone-to-seed, but, as it is, he presents, even at rest, an impression of half-amused readiness, vigor even.

“There are three of ’em who won’t look so very clever come eight o’clock, I’d say.”

Fazackerley tilts his head to one side and makes a bog-eyed, strangulated face, but O’Connor takes no notice. It’s been nine months now since he arrived on secondment from Dublin and he’s become used to the ways of his English colleagues. Always joking with him, striving to get a rise, always prodding and poking about to see what he will say or do in answer. Friendly enough at first sight, but beneath the smiles and laughter he senses their mistrust. Who is he anyway, they wonder, this sudden Irishman, come to tell them how to do their jobs? Even Fazackerley, who is the best by far, treats him, most of the time, as an amusing oddity, some kind of strange exception to the rule, like a visiting Apache or a dancing bear. Other men would feel insulted, but O’Connor lets it pass. He has no desire to explain himself. It is much simpler and easier, sometimes, he thinks, to be misunderstood.

“Maybury asked to see you as soon as you got back,” Fazackerley says, straightening himself. “He’s up with Palin now.”

“Maybury and Palin together? What do they want with me?”

“You’re the true f***ing oracle, Head Constable O’Connor. Didn’t you know that? They want you to tell them what the future holds.”

“If they’d paid me any heed before, then Charley Brett might still be living.”

“That could be true, but it’ll do you not the slightest good to point it out. Our great lords and masters don’t generally enjoy being reminded of their missteps.”

“I hear Palin’s out on his arse anyway after all this dies down. Pensioned off.”

“Policemen do love to gossip, don’t they?” Fazackerley says. “Do you fancy your chances of taking over if he goes, Jimmy? Chief Constable O’Connor, is it?”

Fazackerley snorts at the idea as if he has just made a great joke. O’Connor finishes his tea, tugs down his waistcoat, and politely advises the duty sergeant to bugger off.

Upstairs, he listens for a moment at the office door. He knows Maybury well enough, but he has seen the chief constable only at a distance on official occasions—standing on a dais or seated on a charger. Palin is a short, soldierly-looking man. And, in public at least, rigid and a little twitchy. The day of the ambush he was away somewhere, unreachable, and the various clear warnings went unheeded as a consequence. A clerk in the Head Office has already been dismissed for it, but now the rumors are that the Home Secretary, Mr. Gathorne Hardy, has intervened and Palin will eventually be made to step down, forced retirement to the country and an afterlife of ease and plenty being about as rough as it ever gets for a fellow like him.

O’Connor hears them talking through the door, Palin’s low voice, Maybury’s occasional interruptions, but can’t make out the words. He knocks, the conversation pauses, and Maybury calls him to come in. Neither man smiles or rises from his chair. Maybury, who is of medium height, stout with muttonchop whiskers and a port wine stain on one cheek, nods once. Palin gazes suspiciously at O’Connor as if he has seen him before but can’t remember where. Both men are in their shirtsleeves and Palin is smoking a cigar. There is a jar of mustard and a bottle of vinegar on the table; a smell of sausage lingers in the blueish air.

“The sergeant told me you wanted to see me, sir,” he says to Maybury.

Maybury glances at Palin, offering him the chance to speak first, but Palin shakes his head.

“Give us your report, please, Head Constable O’Connor,” Maybury says. He makes it sound as if this is a normal, everyday duty, as if reporting directly to the chief constable of Manchester in the middle of the night is part of his job.

O’Connor takes his notebook from his inside pocket and thumbs its pages.

“I’ve been walking the town all day,” he says. “And I’ve spoken with some of my informers. I’m confident we have nothing to fear tonight. The hangings will go off smoothly, I’m sure of it. If the reprisals come, they will come later on, when things have quieted down a little. After the troops have all left town.”

“So you have heard some talk of reprisals?”

“Oh, there’s plenty of talking, sir, as there always is, but it’s nothing we need to take too seriously for now.”

“The Fenians are frightened of us then,” Palin says lightly, as if the conclusion is obvious. “Our show of force has worked as we expected.”

“For now, sir, yes,” O’Connor agrees, “but in a month or two I expect the situation will be different.”

“The executions will provoke anger. There is already a strong belief that the sentences are unjust, that Sergeant Brett’s death was manslaughter at worst, not murder. When the three men are hanged, then others who were on the outskirts of the Brotherhood will likely be drawn closer in. The Manchester circles may end up larger and stronger than they were before.”

Palin frowns at this and sits up straighter in his chair.

“I don’t follow that reasoning,” he says. “You seem to be suggesting that a severe punishment might actually serve as an encouragement to others to commit a similar crime. How could that ever be the case? What is the sense?”

O’Connor glances at Maybury for help, but Maybury merely raises his eyebrows and smiles blandly back.

“If you create martyrs, sir, then that is a powerful thing.”

“Martyrs?” Palin says. “These men are not martyrs, they are common criminals. They killed a policeman in cold blood.”

“I agree, sir, of course, but that’s not the general opinion in the Irish parts of town.”

“Then the general opinion makes little sense to me. Are your countrymen really as foolish as all that?” he says. “Will they never learn their lessons?”

O’Connor doesn’t answer straightaway. He still remembers when they brought the old rebel Terence MacManus back from California in ’61, and half of Dublin turned out in the brown fog and pelting rain to watch the funeral parade. They were leaning out of windows and standing six deep in Mountjoy Square that day. When the column reached the gates of Glasnevin Cemetery it was near-enough two miles long. Twenty thousand Dubliners and barely even a whisper when they laid him in the tomb. If you give the Fenians a corpse, then you’d better believe they’ll know what to do with it, he thinks. Before they brought Terence Bellew MacManus home, the Fenians were nothing to speak about, but the next day they were the anointed successors of the men of ’48. Heroes all in-waiting. A clever man will never underestimate the motive power of dust and bones, but Palin isn’t clever. None of them are.

Ian McGuire is the author of The North Water and Incredible Bodies. He is a winner of the Royal Society of Literature’s Encore Award and Historical Writer’s Association Gold Crown Award. He lives in Manchester, England, where he teaches at the University of Manchester’s Centre for New Writing. 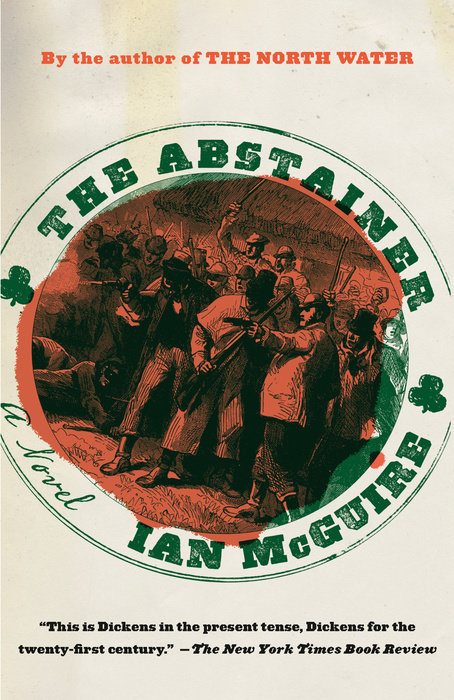