Three plucky women lift the spirits of home-front brides in wartime Britain, where clothes rationing leaves little opportunity for pomp or celebration—even at weddings—in this heartwarming novel based on true events, from the bestselling author of The Chilbury Ladies’ Choir.

After renowned fashion designer Cressida Westcott loses both her home and her design house in the London Blitz, she has nowhere to go but the family manor house she fled decades ago. Praying that her niece and nephew will be more hospitable than her brother had been, she arrives with nothing but the clothes she stands in, at a loss as to how to rebuild her business while staying in a quaint country village.

Her niece, Violet Westcott, is thrilled that her famous aunt is coming to stay—the village has been interminably dull with all the men off fighting. But just as Cressida arrives, so does Violet’s conscription letter. It couldn’t have come at a worse time; how will she ever find a suitably aristocratic husband if she has to spend her days wearing a frumpy uniform and doing war work?

Meanwhile, the local vicar’s daughter, Grace Carlisle, is trying in vain to repair her mother’s gown, her only chance of a white wedding. When Cressida Westcott appears at the local Sewing Circle meeting, Grace asks for her help—but Cressida has much more to teach the ladies than just simple sewing skills.

Before long, Cressida’s spirit and ambition galvanizes the village group into action, and they find themselves mending wedding dresses not only for local brides, but for brides across the country. And as the women dedicate themselves to helping others celebrate love, they might even manage to find it for themselves.

An excerpt from The Wedding Dress Sewing Circle

“I found it!” the Reverend Ben Carlisle’s voice called from the attic. Grace felt her breath catch as she dashed across the vicarage landing to see him come down, a long, flat box held ceremoniously in his arms, a bittersweet smile on his face.

“Where was it?” she breathed.

“It was hidden in a corner behind some boxes of books.” Her father’s black trousers and shirt were flecked with dust, the edge of his white vicar’s collar smeared with dirt, but he still looked good for almost fifty, Grace thought, with his tall frame and his dark hair silvering at the sides.

“Bring it into my bedroom,” Grace said as she raced ahead of him, tidying the small bed in the corner, smoothing down the quilt her mother had made for her. “I can’t believe you found it after all these years.”

He put the box onto the bed. “She always hoped you’d wear her wedding dress.”

Even ten years after her death, his eyes still betrayed his grief. Grace worried about him, sitting alone in his study, distancing himself from not just his parish but the world. Already battling shell shock from the last war, her father had been brought so low in his grief after her mother’s death that Grace had had to take on much of his parish work, organizing weddings and funerals, baking loaves at harvest, and setting up the nativity for Christmas. She’d also taken on his parish visits, looking after the sick or bereaved, helping the poor, fitting them around her job with Mrs. Bisgood at the village shop. The villagers were sympathetic about his seclusion, but Grace fretted over what would happen to the parish once she left for her marital home.

As she pulled off the box lid, the gleam of ivory satin shone brightly from beneath. “Oh, it’s beautiful!”

As Grace pulled the length of shining fabric from the box, a cloud of dust and particles cascaded into the air, a flurry of soft wings bursting out as a dozen moths swept around her bedroom in the shaft of late afternoon sunlight.

She let out a gasp, her gaze shifting from the whirlwind back to the dress, beholding the fitted bodice decorated with glistening pearls. “Oh goodness, it must be pure satin.”

While he budged open the window in the eaves to let the moths out, her father said, “I hope they haven’t eaten the whole thing.”

Grace brought the dress up to hold against her tall, willowy form, walking over to see herself in the mirror.

The dress was truly magnificent. A length of ivory satin swept to the floor, decorated with intricate embroidery of trailing, entwined roses, carefully stitched with tiny pearl beads, giving it the shimmering, polished look of a top couturier’s design. The part above the satin bodice was covered with lace, allowing the breast bones and shoulders to be delicately visible beneath. The long sleeves too were lace, showing the color and contours of the skin beneath.

“But do I live up to it?” Grace’s hand went to her thin, lank hair. With all her parish work, she never had time to set it properly, not that she could ever get it to hold a curl. “I hope Lawrence will like it.”

At twenty-four, she’d almost given up hope of marriage, especially since she had such a small circle of friends and rarely left the village. She was plain, her slight, boyish frame only emphasized by her taller than average height, and she had a habit of hunching her back, of trying to make herself smaller, less conspicuous. She’d always felt that no one would ever want someone like her, and so, with every passing year, she’d plowed ever more of her energy into her work in the parish.

“He’ll think you look mesmerizing; that’s what I thought when I saw your mother wearing it.” Her father stood back, watching her. “I never did find out how your mother came to have such a lovely gown. I suppose I was too busy in those first days of married life, and then it was packed away in the attic and I forgot all about it.”

“How wonderful to be married in the same dress as her! It’ll be as if she’s here with me every step up the aisle.” Grace brought the fabric to her face, smelling it for her mother’s perfume, any semblance of her soft warmth. It was there, even if Grace only imagined it.

In the delight of the moment, neither of them mentioned the obvious.

The moths had eaten through large swaths of the delicate lace across the shoulders, leaving it hanging from the seams. One of the sleeves was held together only by threads, and parts of the bodice were puckered with holes, as was the back of the long skirt.

“It’s not in perfect shape, but I’m sure you can mend it.” A trace of doubt couldn’t be hidden behind her father’s optimism. “All it’ll take is some new lace and a bit of time and skill.”

“Why don’t you take it to the Sewing Circle, see if they can help?”

“They’re busy with a second-hand clothes sale to raise money for the village hall. It’s in desperate need of repairs now that it’s a nursery school, a training room for the Home Guard, and a meeting place for every other village group.”

Determined to salvage his daughter’s excitement, her father inspected one of the sleeves. “I’m sure they’ll find a way to patch it up.” His eyes shined at Grace. “You need to stop letting your doubts get in the way.” Smiling, he said, “Go on, try it on. Let’s see how it looks. I’ll pop downstairs and put the kettle on while you change.”

Within a few minutes, Grace had taken off her old brown skirt and fawn cardigan and slid the dress over her head, wriggling it down over her slip.

This was her only chance of having the white wedding she’d always wanted. Nazi U-boats patrolling British coasts had brought imports to an absolute minimum, and fabric was one of the first items to go. The population had been issued with a sparse number of clothing coupons to buy essentials, and now the government stipulated new bridal gowns could only be made from thin butter muslin, if you could find or afford it—which few could.

Now, as she looked at herself in the mirror, she felt something inside her shift.

“Mum,” she whispered, putting an uncertain hand out to the mirror.

Instead of lanky Grace, the woman reflected back at her was truly beautiful, the image of her own mother. She felt herself stand more upright, and her face—usually wearing the caring expression expected of a vicar’s daughter—took on a new energy, as if she were someone special after all.

But then a strange chill came over her, and it was gone. The mirror only showed tall and willowy Grace, tired and pale, wearing a once-beautiful gown that now hung from her, tattered and faded like a sepia photograph.

“Oh, Grace! You look lovely!” Her father came in with the tea, and together they looked at her reflection.

“For a moment, it was as if Mum were here, looking back at me.”

He smiled sadly. “I would love to tell you that you look just like her, but I’m afraid you take after me, tall and dark-haired. And your eyes are even larger and darker than mine. But you’re no less beautiful than she was.”

She reached up and scooped her hair onto her head, feeling a shiver of cold as she exposed her long neck. “Maybe if I put my hair up, I’ll look more like her.”

“She would have been heartbroken to miss your wedding, you know.” He picked up the family photograph from the table beside her bed. It showed the three of them huddled beneath the wisteria in the garden. In the center, her mother was laughing, her face warm and heart shaped, her fair curls tumbling down to her shoulders. Beside her in his vicar’s cassock, her father looked healthier and happier than he did now—how Grace wished she still saw him smile like that. Grace must have been around fourteen when the photograph was taken, her tomboy self in a pair of long shorts and a shirt baggily tucked in. Her hand was on her forehead, blocking the sunshine from her eyes, and she grinned as if all the world belonged to her. Sometimes she wished she saw herself smile more often too.

Jennifer Ryan is the author of The Chilbury Ladies’ Choir, The Spies of Shilling Lane, and The Kitchen Front. She was previously a nonfiction book editor. Originally from Kent and then London, she lives in the Washington, D.C., area with her husband and two children. 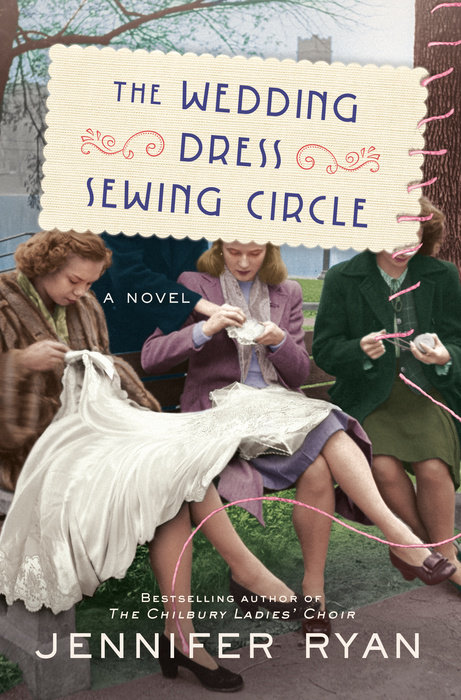