A shooting lays bare the secrets harbored by five families in a sleepy suburban cul-de-sac in this riveting psychological thriller from the New York Times bestselling author of All the Wrong Places.

“Cul-de-sac proves once again that Joy Fielding is an ingenious master of domestic suspense.”—Samantha M. Bailey, USA Today and #1 national bestselling author of Woman on the Edge

Someone on this quiet, unassuming cul-de-sac will be shot dead in the middle of a sultry July night.

Will it be Maggie, the perfectionist wife, or Craig, the husband who can’t quite live up to her expectations? They’ve packed up their two children and fled their life in California, hoping for a fresh start in Florida, only to find the demons of the past hovering on their doorstep.

Maybe it will be Nick, a highly respected oncologist, or his wife, Dani, a successful dentist, both with well-kept secrets of their own.

Or perhaps the victim will be Julia, an elderly widow, whose troubled grandson has recently moved in with her, introducing unsavory habits and even more unsavory acquaintances into her formerly quiet existence.

Then there’s Olivia and her husband, Sean. Having lost his job at a prestigious advertising agency, Sean is depressed, resentful of his working wife, and drinking heavily. He is also prone to increasingly violent fantasies.

And what of the newlyweds, Aiden and Heidi, whose marriage is already on the rocks, due to Aiden’s reluctance to stand up to his intrusive mother? Matters aren’t helped when Heidi befriends Julia’s grandson, setting the stage for a major blowup.

A diverse group of neighbors, to be sure. Yet all harbor secrets. All bear scars. And all have access to guns.

Not all will survive the night.

An excerpt from Cul-de-sac

It’s early May, a couple of months before the fatal events of that sultry summer night, and the clock radio in Maggie McKay’s bedroom wakes her up at six a.m., as it has every weekday morning since the school year began. She reaches across the empty half of the king-­size bed to the nightstand and silences the cloying strains of “Oh, what a beautiful morning” with a decisive slap of her hand before the refrain can repeat.

Probably she should move the radio to the nightstand on her side of the bed so she won’t have to stretch so far. At the very least, she should reprogram the alarm to play another tune. She’s come to hate that stupid song. She doesn’t need reminding that Florida is the land of beautiful mornings. She hates it anyway.

But she doesn’t move the radio and she doesn’t reprogram the tune. And she probably won’t. Because there have been enough changes in her life lately. Too many.

The music was Craig’s idea. A gentler way to wake them up each morning than the shrill beeping jolting them into consciousness. Her nerves were frayed enough as it was, he reminded her unnecessarily. What she needed, he said, was less stress. What he needed, he didn’t say—­maybe wasn’t even aware of at the time—­was less Maggie.

Not that she blamed him for their marriage falling apart, at least not entirely. The move to Palm Beach Gardens had been her idea. A new beginning, she’d told him when she first championed the idea of uprooting their family, abandoning their home, leaving their friends and their careers behind in Los Angeles, and moving across the country. It would be a fresh start. A new beginning. Better for everyone.

Virtually the same words Craig used when he’d packed up his personal belongings and moved out three months ago. “I’m sorry, Maggie,” he added, managing to look as if he meant it. “I just can’t do it anymore.”

“F*** you,” she mutters now, pretty much the first words out of her mouth every morning since he left. “F***ing coward.” She rolls back to her side of the bed, the sheets cool beneath the flimsy cotton of her pajamas, and opens the top drawer of the mirrored nightstand beside the pillow. Her hand feels for the cold, smooth surface of the compact Glock 19, secreted beneath a chiffon swirl of multicolored scarves. The 9mm handgun is by far the most popular handgun in the United States, due to its size and reliability. Or so said the salesman who sold it to her the same afternoon that Craig moved out.

Craig had been adamant about not having a gun in the house, despite everything that had happened. Despite, God forbid, everything that could happen, and probably would happen the minute they became too complacent, she’d argued to no avail. If you’d really wanted to reduce my stress level, she thinks as she lifts the relatively lightweight gun into her hands, this little guy would have done a much better job of relaxing me than that stupid song from an old Broadway musical.

But it’s a classic, she can hear him say.

“F*** you,” she says in return, refusing to be charmed and returning the gun to the drawer. She swivels out of bed, her bare feet padding across the mock-­hardwood floor of the narrow hallway toward the bedrooms of her two children. “Erin,” she calls out, knocking on her daughter’s door before opening it, hearing the teenager moan beneath her mountain of covers. “Time to get up, sweetie.”

“Go away,” comes the muffled response.

Maggie backs into the hall, understanding there’s no point arguing. Erin will stay in bed until she can no longer tolerate the sound of her mother’s exhortations and only then will she deign to get up and dressed. She will spend the next twenty to thirty minutes in the bathroom, fixing her hair and makeup. She will refuse to have anything for breakfast. She will decline to engage in anything resembling a conversation with either her mother or younger brother. She will check her phone, toss her hair, and roll her eyes more times than Maggie can count. And after finally climbing into the black SUV beside her mother, she will remember that she has forgotten something of vital importance—­occasionally the homework she hasn’t completed, usually the cellphone she left in the powder room while doing a final check of her appearance—­thereby delaying them further. She may or may not remember to reset the house alarm, in which case Maggie will have to get out of the car to do it herself. Maggie will then chauffeur the kids to their respective schools, dropping Leo off first, then Erin, who will exit the car without a backward glance just as the bell is sounding.

“This could all be avoided, you know,” she hears Erin say. “All you have to do is—­”

“You’re not getting your own car.”

“You’re not getting your own car.”

“What’s the point of having my license if you won’t let me drive? Besides, if I have my own car, you won’t have to drive us back and forth to school every day. You could get a job, get a life . . .”

And enough of that, Maggie decides, banishing the unpleasant thoughts as she enters her son’s room. She touches him ­gently on the shoulder. “Leo, honey. Time to wake up.”

The shy eight-­year-­old flips onto his back and opens the deep blue eyes he inherited from his father. “What day is it?”

“So we’re having dinner with Dad?”

“And he’ll pick us up after school?”

Maggie nods. “If he’s not there when you get out, you call me immediately.”

Leo tosses off his Star Wars blanket without further prompting and climbs out of bed, his favorite stuffed Super Mario toy in hand, heading for the bathroom he shares with his sister, experience having taught him that he’d better get in there while he has the chance.

Maggie returns to her bedroom. She takes a quick shower in the small en suite bathroom, then throws on a T-­shirt and a pair of shorts before fluffing out her chin-­length, mousy brown hair, hair that used to be lush and shoulder-­length. Used to be, she thinks, mindful of all the things she once was: employed, confident, married. “Don’t forget pretty,” she says out loud, staring at the defeated-­looking stranger in the full-­length mirror on the inside of her closet door. “Who are you?” she whispers. “What have you done with Maggie McKay?”

“Erin!” she calls as she heads down the stairs, eyes on the alert for anything that looks even vaguely out of place. “Time to get up.” She does a quick check of the downstairs rooms—­the combined living-­dining room to one side of the stairs, the kitchen, powder room, and den to the other—­before turning off the burglar alarm to the right of the front door.

She knows she’s being silly—­Craig would use the word “paranoid,” had, in fact, used it on more than one occasion—­that there’s no need to check every room in the house, as she’s done every morning since they moved in eighteen months ago, that no one could circumvent the state-­of-­the-­art alarm system she insisted they install despite its prohibitive cost, and that even if someone did, surely she would hear his footsteps on the stairs, stairs she’s deliberately left uncarpeted for that very reason.

She opens the front door, her eyes doing a quick pan of the small cul-­de-­sac as she bends down to retrieve the morning paper. Hers is the house at the street’s rounded tip, a location that gives her a clear view of the two houses on both sides. The yellow school bus is already parked in front of the house to her immediate right, waiting to transport Tyler and Ben Wilson to their tony private school in North Palm Beach. Maggie acknowledges the bus driver’s nod with an uneasy wave of her fingers and a sigh of relief. It’s the same man who’s been picking them up for the last four months. No reason to panic, as she did after the last driver retired and this much younger one appeared. She’d even called The Benjamin School for confirmation they’d hired someone new, then questioned his references.

“I’m sorry. Who are you?” the school receptionist asked.

“You’re being paranoid,” Craig told her.

“Okay, so I’m paranoid,” Maggie mutters to herself now, retreating into the house. Better paranoid than dead.

Joy Fielding is the New York Times bestselling author of Someone Is Watching, Now You See Her, Still Life, Mad River Road, See Jane Run, and other acclaimed novels. She divides her time between Toronto and Palm Beach, Florida. 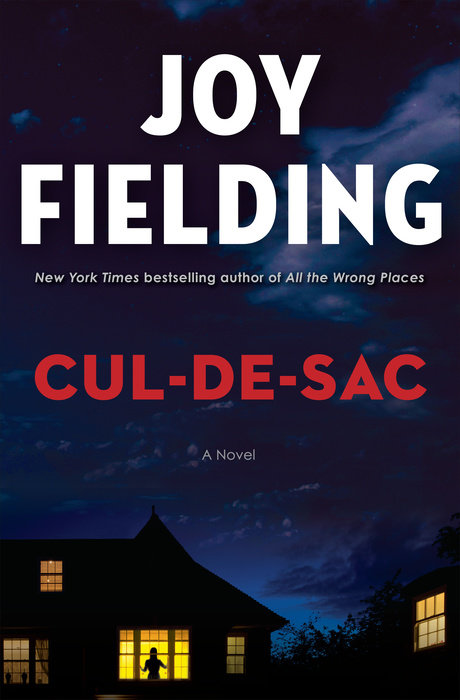