The insightful, audacious, and deeply romantic story of a woman whose life turns upside down after she meets an enigmatic chef on vacation in Italy

“Delicious.”—People (Best New Books) • “Prepare to be swept away on an Italian holiday, one that sizzles with romance, intrigue, and mouthwatering cuisine.”—Lori Nelson Spielman, author of One Italian Summer

What if falling in love means breaking someone’s heart?

On the heels of a difficult break-up and a devastating diagnosis, Shakespeare scholar Lizzie Delford decides to take one last lavish vacation on Elba, the sun-kissed island off the Italian coast, with her best friend and his movie-star boyfriend. Once settled into a luxurious seaside resort, Lizzie has to make big decisions about her future, and she needs the one thing she may be running out of: time.

She leaves the yacht owners and celebrities behind and sneaks off to the public beach, where she meets a sardonic chef named Dante, his battered dog, Lily, and his wry daughter, Etta, a twelve-year-old desperate for a mother. While Dante shows Lizzie the island’s secrets, and Etta dazzles with her irreverent humor, Lizzie is confronted with a dilemma. Is it right to fall in love if time is short? Is it better to find a mother briefly, or to have no mother at all? And most pressingly, are the delicacies of life worth tasting, even if you will get to savor them only for a short while?

A luscious story of love, courage, and Italian wine, Lizzie & Dante demands to know how far we should travel to find a future worth fighting for.

An excerpt from Lizzie & Dante

Water sliced past the boat in a froth of deep blue and grey, the kind of froth that made you think about pollutants. Off in the distance, the island of Elba was a dim green mound.

Elba isn’t known for much. It produces a perfume called Acqua dell’Elba that smells of white flowers and the sea. It’s regularly visited by yachts the size of the Titanic. But mostly, it’s the island where Napoleon was exiled with a throwaway title, Emperor of Elba.

Lizzie Rose Delford was headed to Elba because of Napoleon’s whining comment, Able was I, ere I saw Elba.

It had a dark humor that worked for Lizzie. A stupid little sentence, although the English professor in her noted that “Able was I” was an aphorism and a factoid, as well as a palindrome. Symmetrical, beautiful, and meaningful in its own dark way. To Lizzie: perfect.

Not that any woman with Stage Three cancer could call herself “able.”

An arm abruptly wrapped around her shoulders. “Rohan sent me up to see if we’re about to capsize.”

The boat was pitching in a strong wind. Lizzie rubbed her head against Grey’s chest. “We’re fine.”

Lizzie nodded. “Should Rohan know? Would he want to come up?”

“No. He’s down in the cabin pretending to be nauseated so he can do the Times crossword in peace.” Grey drew her closer, tucked her into the crook of his arm. “Remember that time when we almost capsized on the way to Lesvos?”

Lizzie leaned against him, loving the lean strength of his body and the Georgia drawl he’d never managed to get rid of, though he complained that there was nothing more out of place than a southern man living in L.A. “I dreamed about it for years after,” she admitted.

He opened his mouth and shut it. Probably about to tell her, again, that she should confront her demons, before he thought better of it. Screw her demons.

Elba grew larger in a lumpy sort of way, and German tourists standing in the helm took numerous pictures with their cellphones. The water turned clear turquoise closer to the shore, little whitecaps glinting like sparklers.

Stores lined the harbor, and above them, smoky pink and saffron buildings sprawled on rounded hills.

“The town looks so accidental,” Lizzie said, liking the way the houses piled on top of each other and spilled down narrow streets.

A half hour later, Lizzie humped her suitcase down the narrow metal stairs and got herself out of the belly of their ferry, the Moby-Dick. Once on shore, she stopped.

The pitted cement at her feet was so hot that it seemed to undulate. The air even smelled hot, like brilliant sunlight turned corporeal. Close up, the saffron buildings were cheerfully yellow and orange, and looked even more disordered.

Italians streamed by her, chattering loudly, their tickets littering the ground like confetti. Perhaps they had come over for the day, since they had no luggage.

Someone recognized Rohan. No, a whole group of someones.

He was smiling, likely telling them how much he enjoyed being an Avenger, or an ER doctor, or, since they were middle-aged, lauding the days when he played a feisty kid in a well-meaning gang, he and his buddies roaming around, airing their tats, and accidentally doing good deeds.

Lizzie had watched a few episodes three years ago, after Grey told her he’d met Rohan.

Not, I met a famous actor, or one of People’s most beautiful people, but: “I met a man named Rohan.” That was enough to get her to watch a couple of Marvel movies, a lot of Diagnosis: Unknown, and a bit of In the Hood.

Grey was striding toward her, brown satchel over one shoulder. It looked like the same satchel he’d had when they wandered around Europe before she went to grad school.

“A coven of fans,” he said unnecessarily.

“You can’t fall in love with Rohan Das and expect to avoid his fans,” Lizzie pointed out.

“I could have fallen in love with an unsuccessful actor.”

“True. All those gorgeous failures in L.A. to choose from, and you somehow decided on the ‘most beautiful.’ ”

“Don’t bring it up,” Grey said, elbowing her. “He really thought he might get the cover this year.”

“Oh, for Christ’s sake,” Lizzie said, sitting down on her suitcase.

“He’s not bad for a Hollywood type.”

Grey reached over and tousled her hair. “I really like your curls.”

Rohan was striding down the cement toward them. Narrow-hipped and broad-shouldered, he looked taller as a Marvel hero than he did in real life. In the Italian sunshine, his skin was a shade darker and warmer than the tea-dyed linen he wore. Grey turned and they watched together as Rohan slipped on sunglasses, jacket slung over one shoulder.

“Why no luggage?” Lizzie asked.

“His assistant sent his stuff to the hotel last week.”

Lizzie tried and failed to imagine having so many clothes that she could mail them ahead. “He’s even more handsome than the billboard.”

“Weird, right?” Grey said, one side of his mouth quirking up.

She got it. Whenever she caught sight of Rohan’s underwear ad in Times Square—a gorgeous forty-year-old sprawled on a couch in boxers—she had to wrestle with the fact that he was a real person, let alone that she knew him, and was going on vacation with him.

“Because he’s a regular guy?” she asked.

“Because he’s mine,” Grey said. His happiness was usually unspoken, so Lizzie stood up and kissed his cheek.

“What’s that for?” he asked, squinting at her.

“A salute to certainty, which isn’t your forte, you have to admit.”

Once Rohan joined them, two men appeared out of nowhere, picked up Lizzie’s suitcase, and drove them halfway around the island to a village made up of a few hotels and a handful of houses. Their hotel was low and white, with lavender shutters closed against the sun.

The hotel manager rushed to meet them, not to ask for passports and credit cards, but to offer prosecco in a shady courtyard. They sat down under a huge oak tree, at a table that had faded from violet to a gentler hue.

Lizzie couldn’t stop grinning. The hotel was way above her pay grade, but Grey had asked her to join them with the excuse that Rohan had wrangled his first deal as director—a new film version of Romeo and Juliet—and she was a Shakespeare professor. Time was, Lizzie might have been affronted by such obvious charity.

She thought about it. No, she’d still have taken the vacation, but she would have insisted on Paris instead of Elba.

After they were escorted to their rooms—whitewashed walls, lavender windowsills, fresh flowers—Lizzie had a shower and unpacked, pulling on a short raspberry-colored linen dress that almost felt equal to the hotel before she went back to the courtyard.

Grey and Rohan were there already. Rohan had a copy of Romeo and Juliet tucked in the fold of the Times. “I’ve always wanted to direct Shakespeare,” he told her. “I plan to make Romeo relevant, you know? I played Mercutio in high school and most of the cast didn’t get it. I knew right then that someday I would make the play everything it could be.”

When they were together, Lizzie tended to forget that Rohan was a movie star. He never flaunted it. But when he focused his attention on her, the contours of his face came into focus and she found herself nodding every time he paused.

“I have to, don’t I, to make it relevant,” Rohan said. “No offense, Lizzie.” He flipped the book over on the table and spread his hand on top, as if he was pinning it to the wood. “Great writer, but this language doesn’t work. Grey thinks I might have trouble writing the script.”

That was the weary response he gave to random readers who told him that they too planned to write a bestseller, just as soon as they had time.

“I sleep with a bestselling author,” Rohan pointed out, grinning. “I’ve got a leg up on those poor sods at your book signings.”

“Sleeping with Hitchcock wouldn’t make me a better horror writer,” Grey retorted, but he reached out and squeezed Rohan’s knee.

“There’s your next plot,” Lizzie said, feeling third-wheel-ish. “The ghost of Hitchcock seduces would-be screenwriters and improves their scripts while they sleep.”

“My point is that I have Grey to help,” Rohan said. “And I have you, Lizzie, a real Shakespeare professor. I’ve been jonesing for this project my whole life. It’s my chance to sink my teeth into something deep, with substance.”

Mary Bly is a New York Times bestselling author under the name Eloisa James, and chair of the English department at Fordham University. She lives with her family in New York City, but can sometimes be found in Paris or Italy. She is the mother of two and, in a particularly delicious irony for a romance writer, is married to a genuine Italian knight. 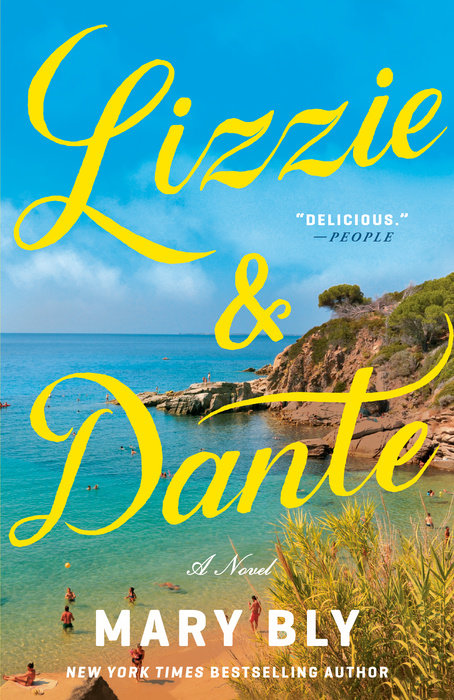