A hypnotic debut of broken love on the run, from a blazingly original young writer

“A road novel, a love story, a coming-of-age tale, but with sentences so sharply wrought, characters so achingly precise, that it feels new and fresh and utterly alive.”—Lynn Steger Strong, author of Want

“In front of me the long length of the road wound out, wound out and wound on under hot sky. And I drove . . .”

In the lonely town of San Padua, Anne Marie can never get the sound of the ocean out of her head. And it’s here—dog-walking by day, working bars by night—where she tries to forget about her ex-husband, Cal: both their brief marriage and their long estrangement.

When Cal shows up on Anne Marie’s doorstep one day, clearly in trouble, she reluctantly agrees to a drink. But later that night a gun goes off in a violent accident and the young couple are forced to hit the open road together in escape.

Crammed in a beat-up car with their broken past, so begins a journey across a vast, mythical American landscape, through the dark seams of the country, toward a city that may or may not represent salvation.

Highway Blue is a story of being lost and found—and of love, in all its forms. Written in spare, shimmering prose, it introduces the arrival of an electrifyingly singular new voice.

An excerpt from Highway Blue

“Where have you been? I’ve been trying to get a hold of you for days.”

“Then pick up your phone. I thought you were dead.”

“I don’t know. I don’t really mean that. But it would be like you. Kidnapped off the beach or something . . . I don’t know.”

A pause at the other end of the line, full of static and small background noises.

After Tricia hung up I put the phone back on the floor and watched as the lights from the street outside crawled up the walls.

The television was on in the apartment. There was the sound of laughter and music, talking, then laughter again; someone was changing the channels.

The television was always on. It sat on the old coffee table in the corner, murmuring softly. It was their background noise and they needed it. The lights were always on too. We couldn’t afford it but they always were.

I shared the apartment with these girls. There were four of them. They worked all together in a hair and nail salon a few streets away and so there were beauty magazines everywhere, women looking out from their covers with dull glazed stares, stares ringed with heavy black, full shapes of pink mouths, wings of cheekbones, smooth faces.

We were not friends. There had been a spare room on offer and so I’d taken it and moved in when Cal left and I couldn’t afford the rent on our apartment. I had been so numb back then I would have moved in anywhere.

I was at the stove, stirring a pot of soup before I went out for my bar shift. I had my back to them but I could hear them getting ready to go out to some club in Tana Beach. They talked about boys and they talked in terms of numbers, not names. They analyzed nightly totals.

One of them got up to leave the room and she walked past me and tried to smile. Her name was Lola and sometimes she tried to smile at me in that way that was a little self-­conscious but well-­meaning. I think she felt some kind of obligation for us to be friends because we lived together and all the other girls were good friends except for me. I smiled back and it was insincere and forced.

After she left, the other girls began to talk about her because they had become tired of boys now and the rule was that if one of them left the room in the apartment then that made her fair game for the others to talk about.

There was no real malice in it. It soothed them.

Outside I could see the yellow tops of palm trees, bright because of the streetlight that was underneath them. They were tall and molting thick wads of palm fibers; their leaves glowed.

Tonight it was raining hard and the rain showed yellow, too, in a globe around the palm trees, and then beyond that where there wasn’t light you couldn’t see any rain.

Work at the bar was long and hot and busy under the glow of the deep purple strip lights that ran along the ceiling and picked out flashes of the teeth and eyes of people leaning forward and sitting on the bar stools. Bad music played too loudly out of a speaker in one corner. The aging manager sat on a plastic chair behind the countertop in front of the door to the kitchen and smirked and made flirtatious and overfamiliar comments as he did every night, and I gave him dead smiles and thought about emptying bottles of beer over his head. Outstretched hands waved and pushed crumpled bills at me and I pulled pints and gave them out sticky-­handed.

The air was sour and bad and I was tired and my head felt heavy.

Later, after I got home, I found that the girls had brought five boys back to the apartment. The boys all wore the same thing. Their hair was cut in the same way. They spoke the same, they had affected accents and sometimes the accents slipped. I saw what they were looking for, which was for us to laugh and look nice. So I laughed. They were stupid and I saw that they were stupid right away.

I was wearing my dress from work and felt it tightly round my waist. I thought, Look at my legs, put your stupid eyes on my body. I knew they did.

I kept my face smiling. Did you know that I can be smart? I’m smart when I want. What do you want? Tell me.

Around me the other girls sat, bare legs pressed together, pale hair combed up big and brittle with spray. Heavy eyes under wads of false eyelashes. They giggled and swayed their heads with the music and spilled drinks and the air smelled like cheap vodka.

“Lucy, get your elbow off me, you’re so skinny—­Shauna, don’t you think she’s skinny? Look at this!”

“—­you didn’t see what she wore out the other week, looking like a skank—­”

The boys sat in between them and smirked and watched them.

After a while one of them kissed me and I tasted alcohol in his mouth, and chewing gum.

I watched the other people in the room and I felt cold and sealed away from them.

We walked down the street outside together.

It was still raining but it was a hot rain, a hot night.

In the distance the crash of the waves boomed from the beach. Sometimes when it rains it makes the waves sound louder.

In San Padua you can never get the ocean out of your brain.

Ailsa McFarlane was born in 1997 in Seattle, Washington, and grew up in Snowdonia in the United Kingdom. After leaving school, she studied veterinary science before dropping out to travel the United States and Europe by road. Highway Blue is her first novel. 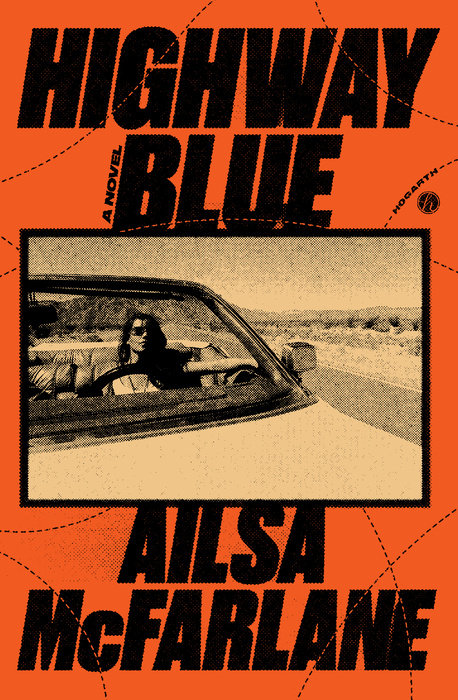