A New History of Old Europe

“Thrilling . . . a bracing summary of what we have learned [from] ‘archaeogenetics’—the study of ancient DNA . . . Krause and Trappe capture the excitement of this young field.”—Kyle Harper, The Wall Street Journal

Johannes Krause is the director of the Max Planck Institute for Evolutionary Anthropology and a brilliant pioneer in the field of archaeogenetics—archaeology augmented by DNA sequencing technology—which has allowed scientists to reconstruct human history reaching back hundreds of thousands of years before recorded time.

In this surprising account, Krause and journalist Thomas Trappe rewrite a fascinating chapter of this history, the peopling of Europe, that takes us from the Neanderthals and Denisovans to the present. We know now that a wave of farmers from Anatolia migrated into Europe 8,000 years ago, essentially displacing the dark-skinned, blue-eyed hunter-gatherers who preceded them. This Anatolian farmer DNA is one of the core genetic components of people with contemporary European ancestry. Archaeogenetics has also revealed that indigenous North and South Americans, though long thought to have been East Asian, also share DNA with contemporary Europeans.

Krause and Trappe vividly introduce us to the prehistoric cultures of the ancient Europeans: the Aurignacians, innovative artisans who carved flutes and animal and human forms from bird bones more than 40,000 years ago; the Varna, who buried their loved ones with gold long before the Pharaohs of Egypt; and the Gravettians, big-game hunters who were Europe’s most successful early settlers until they perished in the ice age.

Genetics has earned a reputation for smuggling racist ideologies into science, but cutting-edge science makes nonsense of eugenics and “pure” bloodlines. Immigration and genetic exchanges have always defined our species; who we are is a question of culture, not biological inheritance. This revelatory book offers us an entirely new way to understand ourselves, both past and present.

An excerpt from A Short History of Humanity

A New Science Is Born

A Siberian finger points us to a new archaic human. Archaeogenetics comes alive. Geneticists are feeling the gold rush with their shiny new toys. Jurassic Park makes everybody go nuts. Yes, we’re all related to Charlemagne. Adam and Eve didn’t live together. The Neanderthal reveals an error.

A Bone on My Desk

The fingertip I found on my desk one winter’s morning in 2009 was really only the last sad remnant of a finger. The nail was missing, and so was the skin; it was the very end of the outermost bone, no bigger than a cherry stone. It belonged, as I later discovered, to a girl between the ages of five and seven. The fingertip was nestled in the customary padded envelope and had come a long way, from Novosibirsk. Not everyone would be pleased to find a severed digit from Russia on their desk before they’d had their morning coffee—but I was.

Almost a decade earlier, in 2000, the American president Bill Clinton had given a press conference at the White House in which he announced that, after years of work and billions of dollars invested in the Human Genome Project, our genes had at last been decoded. The project, which began ten years before, in 1990, was the first-ever international scientific research attempt to sequence all of the genes of our own species—otherwise known as the human genome. It remains one of the most ambitious and groundbreaking moments in scientific history. DNA was instantly headline news across the world: one of Germany’s biggest newspapers cleared its features section to print the sequence of the human genome, an endless series of the base pairs A, T, C, and G, which constitute DNA. Many people were struck by the new significance of genetics, believing DNA would allow them to read human beings as though from a blueprint.

In 2009, science was already much closer to this goal. I was working as a postdoctoral researcher at the Max Planck Institute for Evolutionary Anthropology in Leipzig (MPI-EVA). The institute was the world’s most important research hub for scientists wanting to sequence DNA from old bones, providing them with cutting-edge technology. More than a decade of laborious genetic research had already been conducted there, research without which the finger bone on my desk could never have been used to alter our understanding of the history of human evolution. The bone, discovered in Siberia, represented the 70,000-year-old remains of a girl who belonged to a previously unknown kind of archaic hominin. It took only a few milligrams of bone powder—and a highly complex sequencing machine—to reveal this fact. Just a few years earlier it would have been technologically inconceivable to determine from such a tiny fragment whom it belonged to. Yet the bone had more to tell us. Not only did we learn what made the girl similar to human beings alive today, we learned how she was different.

One Trillion a Day

The notion that DNA is life’s blueprint has been around for more than a hundred years. In 1953, using pioneering work by British chemist Rosalind Franklin, American biologist James Watson and British physicist Francis Crick discovered the structure of DNA. Nine years later the two men were both awarded the Nobel Prize in Physiology or Medicine (by that point Franklin had died, passing away at the young age of thirty-seven). Ever since then, the medical community had put in the work on DNA that ultimately heralded the Human Genome Project.

In the 1980s, another milestone along the road toward decoding, or reading, DNA was reached with the development of the polymerase chain reaction. This process allows us to determine the order of base pairs within a DNA molecule, and it is indispensable to sequencers today. Since the turn of the century, sequencing technology has been advancing apace. If you compare the old Commodore 64 computer with a smartphone today, you’ll have an idea of how swiftly technology has progressed in the field of genetics.

Let me give you a few statistics to illustrate the scale of what we’re discussing when we talk about decoding DNA. The human genome consists of 3.3 billion base pairs. In 2003, when the Human Genome Project came to an end, it would have taken more than ten years to unravel the genetic code of a particular individual. Today our laboratory can process a trillion base pairs every day. The throughput of these machines has increased by a factor of 100 million over the past fifteen years: currently, one sequencer can decode an extraordinary 300 human genomes in a single day. In ten years the genome of a billion people worldwide will have been decoded with some degree of certainty, and so far we’ve systematically underestimated the rate of technological development. DNA sequencing is becoming quicker and cheaper all the time and will soon be an option for almost everybody. Mapping out someone’s DNA currently costs less than a full blood panel, so it will hardly be surprising if young parents start routinely requesting the decoded genome of their newborns. DNA sequencing offers undreamed-of possibilities—catching genetic predispositions to certain illnesses early, for example—and this potential continues to grow.

While the medical community tries to improve their understanding of disease and develop new therapies and drugs by decoding the genomes of living people, archaeogeneticists are harnessing this technology to analyze archaeological finds. Old bones, teeth, or even soil samples can help archaeogeneticists to draw conclusions about the origins and genetic relationships of people long dead. This work has opened up entirely new avenues for the field of archaeology. We no longer have to rely solely on theories and interpretation; rather, genetic analyses allow us to pin down, say, migration patterns more precisely than ever before. The ability to decode ancient DNA has proved as momentous for archaeology as another technological revolution that dates back to the 1950s, when the radiocarbon method transformed the way archaeological finds were dated. Carbon dating was the first tool that enabled scientists to reliably date human remains, albeit not to the precise year. DNA technology allows archaeogeneticists to read skeletal fragments and identify connections that would have been unknown even to the people to whom the bones once belonged. The remains of human beings who have lain in the earth, sometimes for tens of thousands of years, have thus become valuable messengers from the past. In these fragments the stories of our ancestors are written, stories we will tell—some of them for the first time—in this book.

A New History of Old Europe 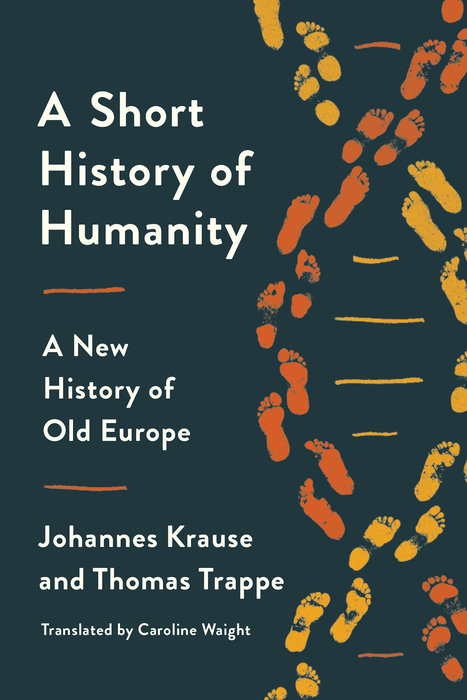