A young woman’s escalating obsession with a seemingly perfect man leads her down a dangerous path in this novel of suspense brimming with envy, desire, and deception.

“A delicious and marvelously controlled portrayal of one woman’s delusions, and how they undo her, but also create something new and whole.”—Sarah Weinman, The New York Times Book Review

Eyes aren’t the windows to the soul. Emails are.

Cassie Woodson is adrift. After suffering an epic tumble down the corporate ladder, Cassie finds the only way she can pay her bills is to take a thankless temp job reviewing correspondence for a large-scale fraud suit. The daily drudgery amplifies all that her life is lacking—love, friends, stability—and leaves her with too much time on her hands, which she spends fixating on the mistakes that brought her to this point.

While sorting through a relentless deluge of emails, something catches her eye: the tender (and totally private) exchanges between a partner at the firm, Forest Watts, and his enchanting wife, Annabelle. Cassie knows she shouldn’t read them. But it’s just one look. And once that door opens, she finds she can’t look away.

Every day, twenty floors below Forest’s corner office, Cassie dissects their emails from her dingy workstation. A few clicks of her mouse and she can see every adoring word they write to each other. By peeking into their apparently perfect life, Cassie finds renewed purpose and happiness, reveling in their penchant for vintage wines, morning juice presses, and lavish dinner parties thrown in their stately Westchester home. There are no secrets from her. Or so she thinks.

Her admiration quickly escalates into all-out mimicry, because she wants this life more than anything. Maybe if she plays make-believe long enough, it will become real for her. But when Cassie orchestrates a “chance” meeting with Forest in the real world and sees something that throws the state of his marriage into question, the fantasy she’s been carefully cultivating shatters. Suddenly, she doesn’t simply admire Annabelle—she wants to take her place. And she’s armed with the tools to make that happen.

An excerpt from Just One Look

As I stepped off the elevator on the second floor, I found myself silently begging for a calamity. A fire, a flash flood, even a tiny earthquake would suffice. Anything that would give me a legitimate reason to evacuate the area immediately. Or, better yet, I wouldn’t make it out in time and the somber voice of Brian Williams would detail my demise on the nightly news. Cassie Woodson entered the midtown office building on the first day of her new job mere seconds before the entire skyscraper was reduced to rubble by the powerful explosion.

Calling this a “new job” would be generous, though. That implied some degree of longevity. But hopefully Brian Williams would throw me a bone.

I smoothed my hands over my wrinkled pants and scanned for a floor directory, feeling disoriented. It had been six months since I stepped foot inside an office building—or almost anywhere outside of my apartment for that matter—and there was something about the buzz from the overhead lights that was making me dizzy. Or maybe it was just being in the upright position for longer than the time it took to walk from my couch to the bathroom.

“There will be a temporary employee badge waiting for you at the reception desk in the lobby. From there, you need to take the elevator to the second floor and head to Room 241,” the man from the temp agency had painstakingly explained on my voicemail last night, as if he was giving directions to a confused toddler. He was obviously in need of the fee he received for placing me. There was a note of foreboding in his tone when he finished with, “I told them you were coming, so don’t go AWOL.” I wondered how many of his clients accepted a job and promptly went AWOL. If it was more than zero, it wasn’t a good sign.

A petite woman with an armload of accordion files and a no-nonsense expression emerged from one of the numbered doors and walked briskly toward the elevator bank. I stood up straighter and threw my shoulders back, trying to force my body to emit a sense of composure I wasn’t really feeling.

“Can I help you with something, hon?” she asked, arching a quizzical brow.

If only you could. I swallowed hard and said, “I’m just looking for Room 241.”

“Second door on your right.” She gestured with her head as she stepped onto the elevator.

“Thanks,” I called out as the doors banged shut. The dread that had been accumulating since morning collected in my throat.

It’s only temporary, I silently repeated to myself, wishing the Advil I’d chased with Pepto minutes ago would somehow help dull the thoughts ricocheting in my head. Clearly, I needed something stronger.

Room 241 was beside the emergency exit door, and as I chewed my lip, briefly considering which one to open, the voice of the Let’s Make a Deal game show host ran through my mind. Cassie Woodson, do you want door number one or door number two? I was almost certainly going to pick the door that had a family of goats bleating behind it instead of the shiny new car, but what choice did I have? I couldn’t go AWOL or I wouldn’t get a paycheck. And I was fresh out of other options. It was bleating goats or be evicted from my apartment for not paying my rent.

I took a deep breath, cautiously put my hand on the chrome door handle, pushed it open, and stepped inside Room 241.

“Seriously? Another one?” A beaky-faced man called out when I entered the bunker-like room. “Shit,” he huffed. “That must mean we’re getting another data dump if the higher-ups are sending in more troops.” He pushed his chair back from his spot on the long, industrial table of computers, stood up, and dusted his fingertips against his leg, spreading powdered sugar streaks all over his black pants.

“I’m Ricky.” He stuck out his hand. “Staff attorney extraordinaire. I run the ship around here.”

“I’m Cassie.” I shook his clammy palm and forced a smile. My eyes darted around the windowless room which, judging from the piles of banker’s boxes pushed into the corners, doubled as a storage area. I had the sudden feeling that the stained white walls were closing in on me, constricting around my lungs.

“Cassie.” Ricky nodded, furrowing his brow, as if rolling the word around in his head. “Well, Cassie, I didn’t know the temp agency was sending over a new girl today so your arrival is news to me.” I cringed at both the word “girl” and “agency.” It made me feel like Peggy Olson showing up for her first day at Sterling Cooper. Except Peggy was embarking on an upward career trajectory, but I most certainly was not.

He took the card and studied it like a border guard inspecting a passport before handing it back to me and exhaling a frustrated sigh. “Well, one of the associates or partners up there must have called for you.” He pointed at the ceiling when he said “up there,” reminding me that we were, quite literally, at the bottom of the legal industry’s totem pole. The real lawyers, the ones with titles and offices and steady paychecks, were thirty floors above us, while the temps were relegated down below, like steerage passengers on the Titanic.

“Okay, guys.” Ricky whirled around, addressing the room. There were four rows of computers, each with a faceless person clicking robotically at the mouse. Ricky waved his arms around like he was hailing a rescue helicopter and waited as the robotic mouse-clickers removed their earbuds, peered over their computers, and reluctantly gave Ricky their attention. They reminded me of a family of moles peeking out of their dark holes.

“We’ve got a new girl from the temp agency,” Ricky called out. “So, I think this means we can expect more documents to be dumped on the server today.”

I gave an awkward wave, not sure if I should introduce myself to the group by name. Considering my username was Temp 021 maybe they didn’t really do names around here. The knots in my stomach tightened. Four years of college, three years of law school, and the hardest bar exam in the country and this is who I had become: the new girl from the temp agency.

“Follow me, Cassie.” Ricky gestured to me, leading the way down a row of chairs. “Your station is the one closest to the wall.”

I sucked in my breath to squeeze behind the chairs, repeating “excuse me” quietly, but everyone had already replaced their earbuds and turned their attention back to mouse-clicking. I blinked back unexpected tears. I knew working as a temp would be a step down from being a law firm associate—you can’t take a sixty percent pay cut and not realize your career is moving in the wrong direction—but this was even worse than I had envisioned. I thought temps would be assigned cubicles, but the only walls in this place were the ones holding up the building. No one had a separate desk or even a phone—just a computer, a chair, and barely enough personal space to blow your nose.

I felt the heavy weight of claustrophobia on the back of my neck.

“So, did your last temp job wrap up recently?” Ricky asked.

“Um . . . yes. About a week ago,” I said, wiping my suddenly damp palms against my leg. I’ve never been someone who could lie without an instant physiological reaction. Landon once told me he’d never met anyone who suffered as much anxiety as I did from telling a white lie. I can never take you to Vegas, he’d joke. You’ll lose all our money at the poker table with those tells of yours. He’d smile that crooked smile of his and wrap his arms around me, as if my tells were just one of the many ways he found me irresistible, while I would think of nothing other than how he’d used the word “our,” like we were an inseparable unit.

I had to resist the urge to pull out my phone and send him a text saying exactly that. F***. You.

And f*** me for tossing off that lie to Ricky for no good reason other than I wanted to nip the line of questioning in the bud. Now I was going to have to remember that I was supposed to have worked at another temp job a week ago in case Ricky brought it up later. I would have to come up with a few unverifiable details to substantiate the story.

More lies added to the pile.

“Here we are—workstation twenty-one.” Ricky gestured grandly to the black pilled swivel chair and a computer that was likely acquired during the Bush administration. The first one. “Your new home.” He smiled and I couldn’t help but notice he had powdered sugar on the cracks of his lips. I looked away, feeling embarrassed for him.

Lindsay Cameron worked as a corporate lawyer for many years in Vancouver and New York before becoming a novelist. Just One Look is her suspense debut. 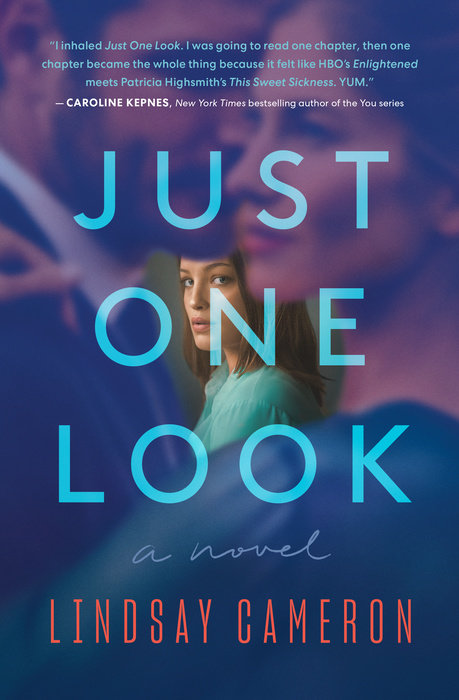