From the bestselling author of A Ladder to the Sky—“a darkly funny novel that races like a beating heart” (People)—comes a new novel that plays out across all of human history: a story as precise as it is unlimited.

This story starts with a family. For now, it is a father and a mother with two sons, one with his father’s violence in his blood, one with his mother’s artistry. One leaves. One stays. They will be joined by others whose deeds will determine their fate. It is a beginning.

Their stories will intertwine and evolve over the course of two thousand years. They will meet again and again at different times and in different places. From Palestine at the dawn of the first millennium and journeying across fifty countries to a life among the stars in the third, the world will change around them, but their destinies remain the same. It must play out as foretold.

From the award-winning author of The Heart’s Invisible Furies comes A Traveler at the Gates of Wisdom, an epic tale of humanity. The story of all of us, stretching across two millennia. Imaginative, unique, heartbreaking, this is John Boyne at his most creative and compelling.

An excerpt from A Traveler at the Gates of Wisdom

On the night that I was born, my father, Marinus, left our home while my mother was in labor and, over the eight hours that followed, slaughtered a dozen infant boys, the sons of our neighbors and friends, each one under the age of two years.

He owned four swords, including a pair of gladii and an ornamental sica that had been handed down through three generations of our family, but he chose the smallest weapon in his arsenal, a triangular dagger with a wooden handle and silver blade known as a parazonium, to end each of the babies’ lives. A ruby jewel of considerable value lay at the center of the quillion, its liquid blush ready to reflect the blood that spilled from the bodies of the children.

A man of duty, he did not hesitate as he marched from door to door, searching each house for hidden nurslings before plunging his knife into the heart of every boy he found, and while mothers screamed in horror and rained curses down upon his head, fathers stood silently in corners, mute and impotent, knowing that if they dared to speak, the blade would surely find its way across their throats before their sentence came to an end. Older siblings trembled in fear as they watched Marinus go about his dark business, soiling themselves, frightened that they, too, were about to face the judgment of the gods for some unspecified crime, but no, once the babe had been dispatched from this world for the next, my father barely glanced in their direction before making his way to the next house, and the next, and the next after that, for there were more babies to discover and more lives to bring to a premature end.

After each murder, he wiped the blade clean on his tunic, the fabric growing increasingly discolored as the sun began to peep over the horizon in the east, a fiery witness to unspeakable crimes, and soon the gray disappeared beneath an incarnadine coat.

Of course, Marinus was not the only man engaged in sanguineous misadventures that night. More than thirty other soldiers had been deployed by King Herod to the towns that surrounded Bethlehem, from Ramat Rachel in the north to Rafida in the south, and from Har Gilo in the west to Juhazm in the east, until more than three hundred infant boys were put to death for the crime of being a potential King of the Jews.

When my father returned home in the early morning, his spirit dyed with a barbaric tint that could never be erased, I was suckling at my mother’s breast and he placed a trembling hand upon my skull, resting it there for a moment as he gave me his blessing and begged forgiveness from the immortals atop Mount Olympus. When he took it away, a trace of blood was left in its wake, a deadly deposit, and I’ve always wondered whether some residue of his crimes remained indelibly upon my soul, a tattoo invisible to all but the eyes of the gods, a reminder of the massacre of the innocents that was taking place as I filled my lungs with air for the first time.


There is, of course, an unhappy irony to the fact that he dispatched a dozen babies from this world, for he would be responsible for bringing the same number into it over the course of his life, although few would survive past their infant years.

He also saw off four wives, although none, I hasten to add, at his own hand, and while my mother, Floriana, was the last woman to marry him, she would not be the last to share either his bed or his home.

Marinus’s first marriage took place when he was only twelve years old, a forced contract with his cousin Iunia, the ritual taking place in a stone temple in the town of Za’tara, where they were both born. The marriage was not a success. His father and uncle, greedy men with cruel dispositions, spent their lives slipping between periods of hostility and camaraderie and their children paid the price for their inconstancy. The couple being so young, it was said that all four parents stood on either side of the wedding bed on the night of the ceremony, issuing crude instructions to their naked, frightened offspring on how to achieve consummation, and when Iunia fainted in distress and Marinus burst into tears, they were soundly beaten and informed that they would not be permitted to leave the marriage chamber until the act had been completed to everyone’s satisfaction.

Iunia died less than a year later, giving birth to a son, my brother Junius, her fragile young body so ill prepared for motherhood that it was torn apart by the trauma of childbirth. Although saddened, my father must have grown accustomed to the pleasures of matrimony, for he took a second wife almost immediately, a servant girl named Livia, who gave him a half-dozen more children, most of whom survived only a few months at most, before she was caught in a rainstorm, succumbed to a fever and died of it within a week. And then there was a third wife, Capella, who tumbled into a well while under the influence of wine and was discovered months later, her body already in an advanced state of decomposition. And a fourth, Reza, who was found hanging from a rope, a victim of her own malaise.

Marinus had been fond of his wives and was, by all accounts, a more considerate husband than many in Bethlehem, never raising a hand to any of them in anger, but he had never truly loved them. That emotion was reserved until shortly after his twenty-second birthday, when he laid eyes on my mother for the first time. And although he would not remain faithful to her, monogamy being an unnatural concept to him, I believe that he felt a deeper emotion toward his fifth wife than he had toward any of her predecessors.


My father loved women, all women, and was as indiscriminate with his favors as a dog in heat. He said that tall women excited him, but short women were good for his soul. Thin women made him joyful, but fat women made him giddy. He himself was a magnificent beast of a man, tall and broad, with virile good looks, powerful chest muscles and a set of golden curls that fell to his neck, capturing the sunlight and adding a reflective glint to the deep sapphire eyes that drew his conquests in, hypnotizing them and fooling them into believing that there was poetry hidden behind his beauty. His only blemish was a horizontal scar across his left cheek, the result of a childhood argument with another boy. But this imperfection only enhanced his splendor, for without it, women said, he would have been so exquisite that he could scarcely have been called a man at all.

Skilled in the ways of seduction, he rarely faced opposition to his desires, taking whoever he wanted, whenever he wanted, regardless of class, age or marital status. Indeed, Marinus was as likely to be found in a virgin’s bed as her grandmother’s, and on the rare occasions when his advances were rebuffed he assumed the woman suffered from a disorder of the mind and took her anyway, for he recognized no one’s rights but his own and those of his peers within the Roman legion. He was a brute, certainly, but people adored his company, and I, like them, was desperate for him to love me, to show some added favor toward me as his son. This was a battle that I would never win.

When Marinus and Floriana first met, my mother was promised to another man and only a week from her wedding. She was not in love, of course, but a woman who felt any emotion other than gratitude toward the man who had chosen her would have been regarded as an eccentric. The marriage had been brokered by her father, Naevius of Bethlehem, who accompanied her to the marketplace that morning to negotiate with one of the street vendors over the price of his raisins. While the men haggled, Floriana slipped away, making her way toward one of the textile stalls, where she ran her hand along some dhakai cloth that the trader claimed had been imported from the kingdom of Vanga at great expense.

“Very beautiful,” he assured her, placing his hands together, as if in prayer, to convince her of his honesty. “In that distant place, women make their dresses from these fabrics and their husbands fill their bellies with many babies.”

It was while Floriana was inspecting the man’s wares that my father emerged from the doorway of a nearby house and caught sight of her for the first time. He’d spent the morning in bed with the wife of a local tax collector, ravaging her three times in quick succession as payback for the percentage of his wages that he was forced to return to the imperial purse, but his erotic spirits were ignited once again when he saw the great beauty standing on the other side of the street. He observed the sensual manner in which her fingers stroked the material, her tongue running across her upper lip in pleasure as she caressed the cloth, and felt a longing inside him different to the basic desire for sex that stalked his every waking moment. Here was a new emotion, igniting in the pit of his stomach before coursing through his veins and stimulating every nerve ending. Sensing his gaze, my mother turned and glanced in his direction, flushing immediately, for she had never looked upon so handsome a man before. For her, too, something that had lain dormant inside began to stir.

John Boyne was born in Ireland in 1971. He is the author of eleven novels for adults, five for younger readers and a collection of short stories. His 2006 novel The Boy In the Striped Pajamas sold 9 million copies worldwide and has been adapted for cinema, theatre, ballet and opera. John has won three Irish Book Awards and many other international literary awards and his novels are published in over 50 languages. He lives in Dublin. 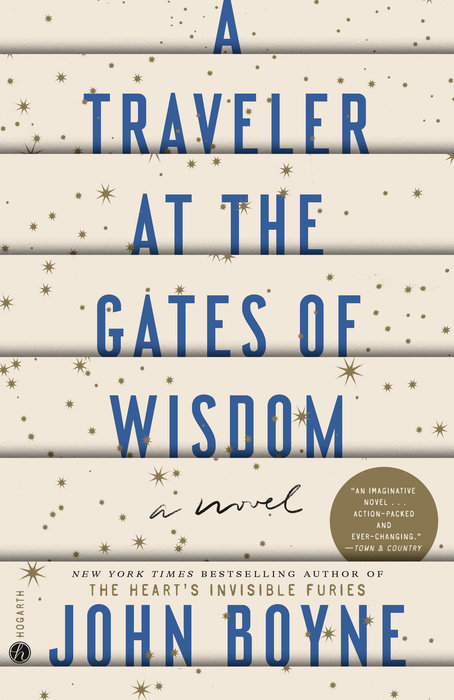