(And Other Truths I Need to Hear)

NEW YORK TIMES BESTSELLER • The bestselling author of Everything Happens for a Reason (And Other Lies I’ve Loved) asks, how do you move forward with a life you didn’t choose?

“Kate Bowler is the only one we can trust to tell us the truth.”—Glennon Doyle, author of the #1 New York Times bestseller Untamed

It’s hard to give up on the feeling that the life you really want is just out of reach. A beach body by summer. A trip to Disneyland around the corner. A promotion on the horizon. Everyone wants to believe that they are headed toward good, better, best. But what happens when the life you hoped for is put on hold indefinitely?

Kate Bowler believed that life was a series of unlimited choices, until she discovered, at age 35, that her body was wracked with cancer. In No Cure for Being Human, she searches for a way forward as she mines the wisdom (and absurdity) of today’s “best life now” advice industry, which insists on exhausting positivity and on trying to convince us that we can out-eat, out-learn, and out-perform our humanness. We are, she finds, as fragile as the day we were born.

With dry wit and unflinching honesty, Kate Bowler grapples with her diagnosis, her ambition, and her faith as she tries to come to terms with her limitations in a culture that says anything is possible. She finds that we need one another if we’re going to tell the truth: Life is beautiful and terrible, full of hope and despair and everything in between—and there’s no cure for being human.

An excerpt from No Cure for Being Human

I was in bed in the surgical wing of Duke University Hospital when the doctor popped his head in the door and smiled apologetically before flicking on the fluorescent lights. It was 4:00 a.m., the end of my second night in the hospital, but no one in a hospital sleeps in the conventional sense. There are only intervals of sleep without rest, interrupted by unfamiliar voices.

What’s your date of birth? On a scale from one to ten, how would you rate your pain?

To this day, if you wake me up from a nap, I will immediately tell you my birthday.

I opened my eyes and saw a boyish face. The doctor wore a white coat too large for his frame and his eyes were bleary either from a day that had only begun or from a night that had gone on too long.

I nodded, and my eyes began to water. I brushed the tears away quickly. Not the right moment for that now, thank you.

“If you keep replenishing my fluids, I’ll just keep crying,” I explained. “Maybe keep me in a stage of light dehydration for the next few days.”

The doctor suppressed a laugh and began to riffle through my case history. “The patient has a history of abdominal pain after meals. Significant weight loss. Nausea and vomiting. No ultrasound evidence of gallstones or cholecystitis, but results of hepatobiliary scan led to a surgical consult to remove the patient’s gallbladder . . . then you got a CT scan.”

“No,” I corrected. “I yelled at a surgeon for the first time in my life and said that I was not leaving his office without a scan. Then they ordered a scan.”

This had been the biggest showdown of my life, the doleful surgeon with his arms folded and me loudly demanding some kind of treatment. It had been five months, and I had lost thirty pounds. I was doubled over with the pain. “I can’t bear this much longer,” I had said, again and again as doctors benignly shuffled me along.

The young doctor glanced up at me and then turned back to his notes.

“The scan revealed that the liver has multiple focal lesions; the largest are seen within the caudate and right hepatic lobe in addition to several scattered subcentimeter lesions, some are noted within the periphery of the liver and some are subcapsular. The large left transverse colon mass was what created the functional obstruction for you, hence the pain.” He looked up at me quickly. “And then there are local regional lymph nodes that are worrisome for early peritoneal carcinomatosis.”

I cleared my throat nervously. “Um, so, this is my first real conversation since the diagnosis. I mean, I know I had surgery, obviously.”

Flustered, I tried to start again. “The day before yesterday, a doctor’s assistant called me on the phone at work to tell me that I had Stage Four cancer. But I don’t know what these terms mean except that it sounds like I am a spaghetti bowl of cancer. People keep saying ‘lesions,’ ” I said. “I haven’t had a chance to google it. What are lesions exactly?”

“Ohhhhh,” I said, embarrassed by another flood of tears. “Right. And are there more than four stages of cancer?”

The doctor stood there for a minute, raking his hands through his hair, whatever plans he had for this conversation deteriorating. He lowered himself onto the chair beside the bed but remained bolt upright as if to remind us both that he could leave at any time. The room was warm and stale. A silence folded over us, giving me a moment to look at him more carefully now, his mussy hair and anxious expression, wrinkled coat and brand-­new sneakers. He is too young for this. God, we are both too young for this.

“I’d like to ask you some questions, if you don’t mind.”

“I’d like to know what my odds are. Of living. I’d like to know if I will live. No one has mentioned that.” I kept my voice invitational. I will not shoot this messenger. This is a friendly exchange between interested peers.

He paused. “I only know how to answer that by telling you the median survival rate for people who share your diagnosis.”

“Based on the information we have about people with Stage Four colon cancer, the survival rate is fourteen percent,” he said and began to scan the room as if looking for a window to climb out of.

“A fourteen percent chance of survival,” I repeated in a neutral voice. My head felt suddenly heavy as if I were pushing the words up a steep hill. Fourteen percent. Fourteen percent. We lapsed into another silence. The doctor shifted in his seat. He rose to leave, but I reached out, abruptly, to stop him.

Startled, he looked down. My hand was closed tightly around his arm like a collar.

He sat back down and carefully took my hand. I closed my eyes and thought of the last time I was here, in this hospital, holding someone’s reluctant hand. It was a maternity nurse. And I could not be reasoned with. “Short inhale! Long exhale!” she had shouted. “Are you laughing or yelling?” A bit of both. But I was waiting for something absolutely wonderful to happen.

I opened my eyes.

“Okay.” I said, letting him go. He stood to leave. “Wait! Wait. Before you go. What does survival mean in this context?”

He paused, his expression softening.

I don’t know what he saw, but he took my hand again.

“Okay,” I said at last. “Okay then.” Because I was counting.

This new definition of living is glued together by a series of numbers. I would be thirty-­seven years old. I would celebrate my fifteen-­year wedding anniversary. Zach would turn three.

I rummage around the things that the nurses had left within reach—­a styrofoam cup of apple juice, peanut butter crackers, an untouched bowl of Jell-­o cubes—­until yes, there. My phone. I pull up the calendar and the calculator for some quick math: two Christmases, two summers, and 104 Thursdays.

I sink back into the bed with a long exhale. That is not enough time to do anything that matters. Only small terrible choices now.

Just then, Toban tiptoes into my hospital room holding a coffee so protectively that I already know the kind of night he has endured. I stuff the phone under my blankets and smile. Seeing me awake, he smiles back, a little nervously. A newly forming habit.

“Did I miss anything?” he asks, coming around to the side of my bed to press his cool palm against my sticky forehead. He frowns.

“No,” I reply quickly. “There’s nothing definite, I mean.”

He settles into the chair and leans back, closing his eyes. I study him for a long moment. My husband has only ever had three facial expressions on his stupidly handsome face: brooding, sleepy, and what I call “trampoline face” which is the self-­satisfied look of a grown man about to do a flip on a trampoline and hoping everyone will stop what they’re doing to applaud. But now I can see we’re adding another.

Kate Bowler is an associate professor of the history of Christianity in North America at Duke Divinity School. She completed her undergraduate degree at Macalester College, received a master’s of religion from Yale Divinity School, and a PhD at Duke University. She is the author of Blessed: A History of the American Prosperity Gospel, the New York Times bestselling memoir Everything Happens for a Reason: And Other Lies I’ve Loved, and The Preacher’s Wife: The Precarious Power of Evangelical Women Celebrities. On her popular podcast, Everything Happens, she talks with people about what they have learned in difficult times and why it is so difficult to speak frankly about suffering. She has appeared on the TED stage, NPR, and Today, and her writing has been featured in The New York Times, The Washington Post, and Time. She lives in Durham, North Carolina, with her husband, Toban, and son, Zach.

(And Other Truths I Need to Hear) 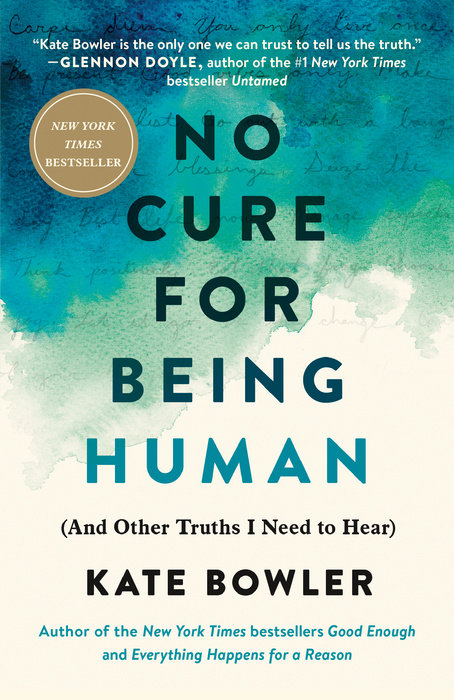