This “powerful” (BuzzFeed) debut about love, grief, and family welcomes you into its pages and invites you to linger, staying with you long after you’ve closed its covers.

“I am madly in love with this book, a kaleidoscopic wonder.”—T Kira Madden, author of Long Live the Tribe of Fatherless Girls

How do you grieve, if your family doesn’t talk about feelings?

This is the question the unnamed protagonist of GhostForest considers after her father dies. One of the many Hong Kong “astronaut” fathers, he stays there to work, while the rest of the family immigrated to Canada before the 1997 Handover, when the British returned sovereignty over Hong Kong to China.

As she revisits memories of her father through the years, she struggles with unresolved questions and misunderstandings. Turning to her mother and grandmother for answers, she discovers her own life refracted brightly in theirs.

Buoyant and heartbreaking, Ghost Forest is a slim novel that envelops the reader in joy and sorrow. Fung writes with a poetic and haunting voice, layering detail and abstraction, weaving memory and oral history to paint a moving portrait of a Chinese-Canadian astronaut family.


“Ghost Forest is the tender/funny book we can all appreciate after a hellish year.”—Literary Hub

An excerpt from Ghost Forest

Twenty-­one days after my dad died, a bird perched on the railing of my balcony. It was brown. It stayed there for a long time.

Hi Dad, I said. Thanks for checking up on me.

I lay down on the couch and read some emails on my phone. When I looked up again, the bird was gone.

When I was four, or maybe six, I found out I was supposed to have a baby brother. But my mom said the baby flew to the sky, and that was why my dad was sad those days.

But why is he sad? I asked.

Because he’s a traditional Chinese father and he wants to have a son. Try to cheer him up.

I was three and a half when we immigrated to Canada. Like many other families, we left Hong Kong before the 1997 Handover. They say almost a sixth of the city left during this time.

My dad had seen news stories of Hong Kongers who couldn’t find jobs in their new countries, stories of managers who became dishwashers because they couldn’t speak the new language. Like many other fathers, my dad decided he didn’t want to leave his job in manufacturing behind.

To help my mom, my grandma and grandpa agreed to move with us to Canada. That spring, my dad took two weeks off from work, and the five of us headed to Kai Tak airport. All my aunts and uncles came to the departure gates to see us off.

In Canada there were more Hong Kong immigrants than in any other country, and in Vancouver, I had many classmates whose fathers stayed in Hong Kong for work too. I didn’t think of my family as different. I thought, this is what Hong Kong fathers do.

Astronaut family. It’s a term invented by the Hong Kong mass media. A family with an astronaut father—­flying here, flying there.

As we walked out of the arrivals at the Vancouver airport, our family friends waved their arms.

Isn’t the air so fresh in Canada? they said.

For two weeks, we stayed at their house in the Richmond neighborhood, and they drove us everywhere. We ate dim sum in Aberdeen Centre, a new mall known as Little Hong Kong, and posed for pictures in Stanley Park, feeding breadcrumbs to the geese. But mostly, we were jet-­lagged, riding in the back of their beige minivan, asleep with open mouths.

Two weeks later, after we moved into our new house, they drove us back to the Vancouver airport, where my mom looked at me and said, Say bye-­bye to your dad now, he’s flying back to Hong Kong.

Through the windows of our new house, I saw plump pointy trees and blurry swishing trees. Everywhere outside was green.

At night, my mom slept in her bedroom, my grandpa in his. I shared a room with my grandma since we were always together. Three generations under one roof.

In our new house in Vancouver, everywhere outside was rain.

Pik-Shuen Fung is a Canadian writer and artist living in New York City. She is the recipient of fellowships and residencies from the Asian American Writers’ Workshop, Kundiman, the Millay Colony, and Storyknife. Ghost Forest is her first book. 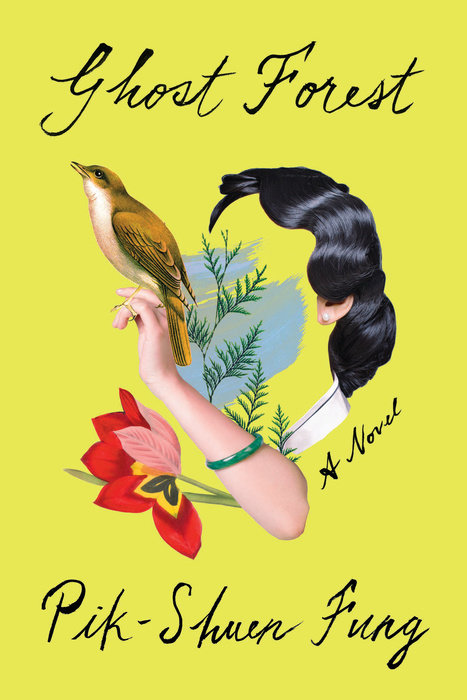