Elizabeth of York is the oldest daughter of King Edward IV. Flame-haired, beautiful, and sweet-natured, she is adored by her family; yet her life is suddenly disrupted when her beloved father dies in the prime of life. Her uncle, the notorious Richard III, takes advantage of King Edward’s death to grab the throne and imprison Elizabeth’s two younger brothers, the rightful royal heirs. Forever afterward known as "the Princes in the Tower," the boys are never seen again. On the heels of this tragedy, Elizabeth is subjected to Richard’s overtures to make her his wife, further legitimizing his claim to the throne. King Richard has murdered her brothers, yet she feels she must accept his proposal.

As if in a fairy tale, Elizabeth is saved by Henry Tudor, who challenges Richard and defeats him at the legendary Battle of Bosworth Field. Following his victory, Henry becomes king and asks Elizabeth to be his wife, the first queen of the Tudor line. The marriage is happy and fruitful, not only uniting the warring houses of Lancaster and York—the red and white roses—but producing four surviving children, one of whom, Henry VIII, will rule the country for the next thirty-six years.

As in her popular Six Tudor Queens series, Alison Weir captures the personality of one of Britain’s most important consorts, conveying Elizabeth of York’s dramatic life in a novel that is all the richer because of its firm basis in history.

An excerpt from The Last White Rose

Elizabeth stirred, roused by the unfamiliar whisper. What was her mother the Queen doing here, shaking her? It was usually Lady Berners who came to wake her with a smile and a “Good morning, my lady Princess.” But Mother was not smiling, and Lady Berners, holding a candle aloft, was standing in the doorway with Mistress Jakes, the wet nurse, who had baby Cecily in her arms. With them was Grandmother Rivers, holding a sleepy little Mary by the hand. They were all dressed for outdoors. But it was still dark and, beyond the narrow window, there was no sign of dawn breaking.

“Shh!” the Queen hissed, putting a finger to her lips. “We must all be very quiet. Get up and I’ll put you into some warm clothes.”

Mother was dressing her? Her lady mother, whose queenly hands never deigned to do everyday tasks? Something must be badly amiss.

Mother gave a faint smile. “I and my sisters had to shift for ourselves before I became queen.” She lifted Elizabeth’s night-rail over her head, put on her smock and her green woolen winter gown and wrapped her cloak around her, pulling the hood down over her face. Then she took her own cloak from Grandmother Rivers and wrapped herself in it, concealing her swollen belly. She turned to the other women. “Let us go.” There was an urgency in her lowered voice.

“Hush! I will tell you later. Now, not a word. We all have to be very quiet.”

The four women hurried the children through the Lanthorn Tower, holding their breath as they passed the open door of the room where the sentries, who were supposed to be on watch, were—luckily—snoring soundly. And then they were out on the wall walk and hurrying down the stairs and along Water Lane, to the postern gate of the Tower of London, which had been left ajar.

“Thank God for a loyal guard,” Mother breathed. Tightly holding Elizabeth’s hand, she led her down the Queen’s Stairs to the wharf, where several small craft were tied up. Lady Berners hailed a boatman.

“Right-ho,” he answered, taking the baby from her as she boarded. The Queen and Elizabeth followed, with Grandmother Rivers, the wet nurse, and Mary climbing on deck last. The boatman adjusted his oars and pulled out into the Thames.

The water was black and sinister. Elizabeth shivered with fear and the chill of the early-October night. Around them, London slept. From the darkness came the distant voice of the watch: “Three o’clock, and all’s well.”

“If only it was,” Grandmother whispered.

Elizabeth was desperate to know what was wrong, but she obeyed her mother and kept silent, wondering why they were going to Westminster at this time of night.

“It’s late for you good ladies to be out,” the boatman observed as they passed Baynard’s Castle, where Elizabeth’s Grandmother York, who was far sterner than Grandmother Rivers, lived. Did she know about this adventure they were having? Maybe she was asleep, like everyone else.

“We are going to my daughter, who is travailing with child as we speak,” Lady Berners said. “I’ve had word that things are critical.”

Elizabeth was surprised, for Lady Berners’s married daughter Anne had only just had a baby, while the other daughter was as yet unwed—and Lady Berners had always impressed on her that it was wrong to tell lies.

“We’ll get you there quickly, then,” the boatman said kindly, and began rowing harder. Elizabeth saw the women exchange glances.

Soon, she could make out the sprawling bulk of the palace of Westminster looming ahead. The boatman pulled in at the jetty and then they were hurrying up the stairs, huddling together as they hastened alongside the wall that enclosed the palace yard. Elizabeth was disappointed when they did not enter the gate, but instead moved away from the palace; she had been entertaining fond notions that they were going to her father the King, who would make whatever was wrong right again. It was a long time since she had seen him. She and her two little sisters had been staying with Mother in the Tower palace for what seemed like ages.

They were passing Westminster Abbey now and walking through St. Margaret’s churchyard. Soon it became appallingly clear that Mother was heading for the great sanctuary building that stood opposite. It was grim and stark, like a church in form, but exuding menace, not holiness. Young as she was, Elizabeth knew that bad people lived there, murderers and thieves. Once, after she had had a nightmare about being trapped in there, Lady Berners had explained that anyone could claim sanctuary, which meant that no one could arrest them or bring them to justice because they were on holy ground, under the protection of St. Peter.

Holy ground it might be, but it was an evil place and Elizabeth was terrified of going there. Tears came as she shrank, whimpering, from the prospect.

Elizabeth was too frightened to heed her. “But why are we going here, my lady? We haven’t done anything wrong. We’re not thieves.”

“Bessy, be quiet. I will explain everything soon.”

A hand descended on Elizabeth’s shoulder. She looked up to see her grandmother smiling down at her. “God is surely watching over us, child,” she said. “He will provide for the best.”

They had reached the stout oak door now and Elizabeth, trembling, saw her mother hesitate, then rap on it with the iron knocker.

After what seemed like an age, a monk opened the door. “God be with you, my sisters. Whom do you seek?”

“Alas, Brother,” Mother said, “we are not here as visitors. We have come to claim sanctuary.”

There was a pause while the monk stared at them all. “Are you debtors? I cannot credit that such fine ladies can be guilty of any crime. And there are children with you—we don’t admit—”

“I am your Queen,” Mother said, putting on that icy look that quelled most people, “and I and my children are in danger. The King has fled the realm and my lord of Warwick and the Duke of Clarence are marching on London. I beg of you, grant us sanctuary.”

Elizabeth listened in confusion. Father had fled his kingdom? And why did they have to run away from her godfather Warwick and her uncle Clarence? She had been vaguely aware that there had been quarrels in the family, and she knew that her mother hated both men, but she had no idea why.

“Her Grace is near her time,” Grandmother said.

“Pray come in and sit down while I fetch Father Abbot,” the monk invited, looking nervous.

As they entered the building, Elizabeth peered about her, frightened lest she see desperate men materializing out of the dimness, but, to her relief, the vast chapel-like space was almost deserted. There were just two sleeping forms, wrapped in their cloaks, lying on the straw at the far end.

Mother sank down on the bench just inside the door. Her froideur had vanished and there were tears on her cheeks. “I cannot believe this is happening,” she whispered.

“Don’t cry, my lady,” Elizabeth pleaded, as her grandmother gathered the stricken Queen to her bosom and three-year-old Mary started wailing. Lady Berners bent to comfort her, a whimpering Cecily still in the crook of her arm.

“You must leave, Lady Berners,” the Queen said, recovering herself and reaching for the baby. “They will not be interested in you.”

“But the children, Madam,” the governess protested as both Elizabeth and Mary clung to her skirts, crying.

“Don’t leave us!” they begged.

“It is an order,” the Queen said. “I would not have you shut in with us when you don’t need to be. It is different for Mistress Jakes.” She looked at the wet nurse. “I cannot let her go. As soon as the situation improves, I will send for you. Quiet, children! You will have me and Grandmother Rivers to look after you, and you will see Lady Berners soon.”

“As your Grace wishes,” Lady Berners said, but Elizabeth could see that she was not happy about leaving. “I dare say I will find an inn tonight, and tomorrow I’ll go to Windsor, trusting that my husband is still constable of the castle.” 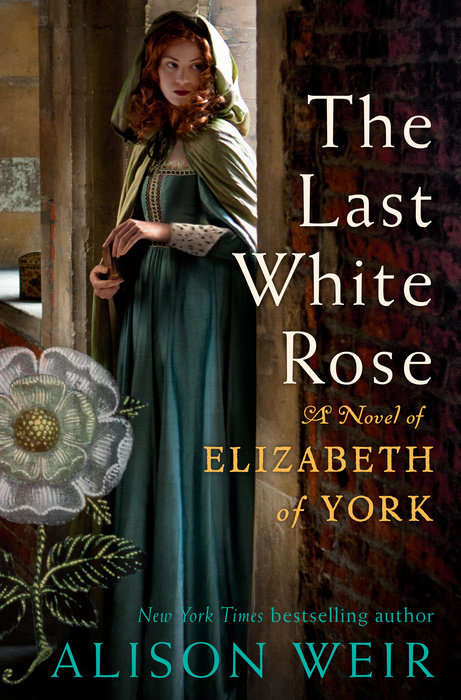