An Indigenous woman adopted by white parents goes in search of her identity in this unforgettable debut novel about family, race, and history.

Finalist for the Governor General's Literary Award • “Engaging . . . Ruby never disappoints with her big heart and outrageous sense of humor—and her resilient search for her own history.”—The New York Times Book Review

“A passionate exploration of identity and belonging and a celebration of our universal desire to love and be loved.”—Imbolo Mbue, author of Behold the Dreamers

This is the story of a woman in search of herself, in every sense. When we first meet Ruby, a Métis woman in her thirties, her life is spinning out of control. She’s angling to sleep with her counselor while also rekindling an old relationship she knows will only bring more heartache. But as we soon learn, Ruby’s story is far more complex than even she can imagine.

Given up for adoption as an infant, Ruby is raised by a white couple who understand little of her Indigenous heritage. This is the great mystery that hovers over Ruby’s life—who her people are and how to reconcile what is missing. As the novel spans time and multiple points of view, we meet the people connected to Ruby: her birth parents and grandparents; her adoptive parents; the men and women Ruby has been romantically involved with; a beloved uncle; and Ruby’s children. Taken together, these characters form a kaleidoscope of stories, giving Ruby’s life dignity and meaning.

Probably Ruby is a dazzling novel about a bold, unapologetic woman taking control of her life and story, and marks the debut of a major new voice in Indigenous fiction.

An excerpt from Probably Ruby

“I like to be in charge,” said Ruby. “I pretend I like watching him jerk off, just so I won’t have to touch him. My commitment level’s kind of low on this one.”

Kal’s face showed no emotion. Instead he looked at the sunglasses resting on top of Ruby’s head. Kal’s office was in the interior of a downtown building and had no windows. Outside, it had been raining for days. He asked, “Is it sunny out there now, Ruby?”

His question made her laugh. She had a royal, attention-­getting laugh, big enough to be heard out in Kal’s waiting room. Which was good. Ruby wanted anyone out there to know Kal and she were having a great time. Try and top that, sucker. That’s what she hoped her laugh said to any waiting client she’d subconsciously pegged as a rival for Kal’s affections. And by “anyone” she mostly meant the shiny, obvious “Lori,” seen on one occasion leaving his office and stopping to make an appointment on her way out; and, another time, waiting for Kal as Ruby left. In an effort to make him even more uniquely hers, she tried out a variety of nicknames on Kal. “Hey, Mister K,” she’d said when she arrived today, to which he just shook his head and smiled, motioning for her to come in. She was pleased to make him smile like that.

Ruby carried on with the chitchat about her new boyfriend. “I say the dirtiest things to him, Kal. To get it over with quicker.”

“Why are guys always so turned on by the idea of coming on your face?” she asked, pausing so he could think about that one. Ruby knew Kal was divorced and had recently started dating. He often told her personal things about himself as a way to relate to what she was going through. Because of this, he was her favorite kind of counselor. She listened carefully to his disclosures.

Sometimes she hit it off with a new counselor and sometimes she didn’t. She usually gave it two appointments to decide, but honestly, a lot of them only deserved one chance, and even then she’d been known to cut the first hour short.

Take the counselor before Kal: Larry, with the huge wooden cross around his neck. So effing big, as if he was compensating for something. Or dragging it around doing penance. He had a serious Jesus complex, that one. She decided quickly: Jesus-­counselor was not going to get the benefit of her attention—­he said one thing about the “sanctity of the marriage bed” and she threw up a little bit in her mouth before she fled. After that she made sure to tell the assigning agent at the insurance company that she didn’t want “Christian” counseling, thank you very much.

In her experience, the people who stressed things the most or the loudest were the first ones to break their own rules. That’s why she always liked to hear one of her counselors say they would “never” date a client. When they said that she couldn’t help but think, Great. Now we’re getting somewhere.

Ruby always fell for her counselors. That was the point, ­really. I mean here was this person and they only had eyes and ears for you. How could you not be crazy about that? You got to be in a room alone with someone who listened hard and cared about what you were saying. Ruby was also counselor-­monogamous, as far as that went. That was, if monogamy meant one at a time, one after another.

“You’re really aware of your anxiety,” Kal said during their first or second session. “You just don’t quite know how to manage it.” He was right. She hated to be alone. She sometimes felt she’d had kids to save her from being alone. But she could still be lonely.

“I’m not all parent,” she told Kal once. “I’m a person, too. I’m often selfish and greedy.” In some ways, the boys were the only thing, and in other ways she needed so much more to save her from her sadness.

Today Kal and she were four sessions in and she was trying to decide if she would renew with him. That was, if her insurance would allow it. Six was the upper limit on the first assignment, and she got six because “her stepdad died.” Which was not really true but, as far as she could tell, insurance companies had no truth-­auditing process. She didn’t have a stepdad. But if she did he might have died, because he’d have been old, right? Ruby’s parents were old, because she was adopted. They were the same age as her real grandparents, and by “real” she meant “birth” grandparents. So if her mom had remarried someone who was even older than her—­which he likely would be, because that’s how patriarchy works—­well, then he would be so old that he might have died. In that case, it was entirely believable that Ruby could have had a stepdad who died. Really, Alice had broken up with all the losers she dated after the divorce, thank god, but still, Ruby was starting to feel a bit sad about the whole dead-­stepdad thing, once she’d thought it through like that.

Her options with Kal at this point were to try to renew her insurance so she could stay connected to him, or to be brave and make a move on him soon. She just didn’t know if he was ready. And then, just as she was weighing all the options, during appointment number four, Kal said this: “Do you want to book your next appointment at my home office? I find it quieter, and it might be a nice change of scenery for our discussion.”

Aha. Up to now, they’d always met at his downtown office, where there was a chaperone. Okay, secretary. At his home office Ruby imagined there would be no one but the two of them. In his house. This was looking promising.

She arrived exactly fifteen minutes early—­if there was some Lori before her, she wanted to see her leaving. But there was no one. She was relieved to see Kal’s house wasn’t smelly or desperate. Or, worse yet, too clean. It looked mostly ordinary. As he led her inside she pointed to a yellow sombrero hanging on the wall between the kitchen and living room.

He laughed. “Mexico. Last winter. I should probably take it down.”

Hoodies on the coat pegs and sneakers near the back door provided evidence of his kids, who were older teenagers. He shared custody with his so-­called ex.

Once, during appointment number three, when Ruby talked about her irrational devotion to Dana, Kal told her, “I understand how you feel. I’m still in love with my ex.”

“Are you? Would you go back with her?” she asked. This turn of events had never occurred to her before. She’d taken at face value his previous pronouncements of “ex,” whom she had started to think of by that name. Ex, in her mind, had been a final, strongly held identity. Now Ruby was all wound up like a jewelry-­box ballerina. Who knew which direction she might end up facing? One minute, he said “ex” as if he meant it; the next he was pining to get her back. Ruby realized she didn’t even know Ex’s real name.

They stopped in the kitchen while he finished making two cups of tea.

“We drank a lot of tea as kids,” he said. “With loads of milk.” She identified drinking milky tea as a kid as a Métis thing. She loved that Kal was part Métis, like her. Only she didn’t grow up with her “real” family, and she never drank tea as a kid, her mother Alice being partial to instant coffee, which had a completely different vibe altogether. She watched Kal pour the hot water into the teapot and longed to know more, to connect to that part of herself she’d never had.

“I bet you were a cute kid,” she said, and filled the room with her big laugh. Kal just smiled and poured the tea.

They settled into his office, which was more like an overstuffed den, with couches and a big chair. She sat on the couch with its back against the wall. She noticed right away the Métis sashes draped over the end tables and along a shelf. Blown-­glass ornaments lined up on the sash on the shelf; more glass works scattered on the side and coffee tables. Bowls, paperweights, ornaments—colorful blues, oranges, greens, and purples, swirls of molten glass hardened shiny and cold. On the table beside the couch sat a perfectly round glass marble, slightly smaller than a golf ball: clear glass, with a purple-­and-­green flower trapped inside. Ruby knew Ex was an artisan, a glassblower. These must be hers.

After some general small talk, Kal asked her an unexpected question.

“Tell me what kind of kid you were.”

“That’s a great question,” she said, a big believer in warranted compliments.

He smiled a bit despite himself. “So? What were you like?”

“I was a serious tomboy,” she confessed. “I had short hair and I dressed like a boy and ran wild. All my friends were boys, and all I wanted to do was play sports and smoke cigarettes and break shit.”

Lisa Bird-Wilson is a Cree-Métis writer and poet and the CEO of the Gabriel Dumont Institute of Native Studies, an organization committed to the renewal and development of Métis culture and education. Probably Ruby is her debut novel and her American debut. She lives in Saskatoon, Canada. 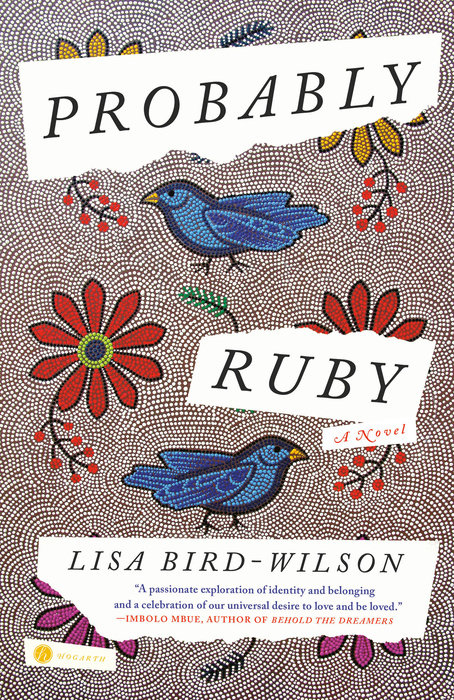