The brilliant duo of Arthur Bryant and John May uncovers a nefarious plot behind the seemingly innocuous death of an old lady—and when the case leads them to London Bridge, it all comes down on the Peculiar Crimes Unit.

When ninety-one-year-old Amelia Hoffman dies in her top-floor flat on a busy London road, it’s considered an example of what has gone wrong with modern society: she slipped through the cracks in a failing system.

But detectives Arthur Bryant and John May of the Peculiar Crimes Unit have their doubts. Mrs. Hoffman was once a government security expert, though no one can quite remember her. When a link emerges between the old lady and a diplomat trying to flee the country, it seems that an impossible murder has been committed.

Mrs. Hoffman wasn’t the only one at risk. Bryant is convinced that other forgotten women with hidden talents are also in danger. And, curiously, they all own models of London Bridge.

With the help of some of their more certifiable informants, the detectives follow the strangest of clues in an investigation that will lead them through forgotten alleyways to the city’s fabled bridge in search of a desperate killer.

But just when the case appears to be solved, they discover that Mrs. Hoffman was smarter than anyone imagined. There’s a bigger game afoot that could have terrible consequences.

An excerpt from Bryant & May: London Bridge Is Falling Down

The Girl on the Crossing

May in Regent’s Park could put a spring in the step of a corpse.

Crimson and saffron flowerbeds, enamelled lawns, fountains glittering beneath an azure sky. Twelve thousand roses in Queen Mary’s Garden, blossoming in a riotous display of colour that was positively vulgar. The month brought forth scented air and warmth to the back of the neck.

Sammi Jansome’s hand hurt. She had spent the previous afternoon slicing lemons and her knife had slipped. The lemon juice had got under the dressing and made her wince every time she lifted a tray. She’d had to stop and buy some waterproof bandages in Boots but there’d been a queue and now she was running later than usual. Usually she wore her black Adidas trainers and changed in the staff dressing room, but this morning she had snapped a lace while retying it on the tube and had been forced to don her pumps.

She cut through the park from its lower corner near Baker Street, heading for her shift at the US ambassador’s residence. Winfield House stood behind fifteen-foot-high black iron gates that appeared decorative but could withstand a missile attack. The bland chocolate box of a building on the north-west side of the park had been commissioned by the Woolworth heiress Barbara Hutton, who had lived there with her husband, Cary Grant. Once it had provided hunting grounds for boar and deer. Now its marquees held smug receptions and charity fundraisers in the vast manicured garden.

Sammi was the toastmistress responsible for charging glasses. There were rarely fewer than two hundred guests in the watery green garden room. The champagne glasses had to be half filled before the room was opened, then topped up as they were handed out.

Right now the sergeant-at-arms would be ensuring that the same geometric volume of glassware was available on every table. Someone else would set out individual chocolates, spacing them equally across the tables. The treats were decorated with Belgian fondant, each dressed with a tiny red satin sash like Christmas tree ornaments. They hid the fact that no expensive savoury canapés were being served this afternoon. The Grade I tuna had been set aside for tomorrow’s event with the Japanese ambassador.

Her task was simple and exact, and slotted in with a hundred small tasks performed by other employees to form a seamless whole. The ambassador’s residence had too many staff and too much protocol. Its laws were as rigid and inviolable as those at a Tudor court.

Sammi couldn’t wait to leave her job, but at least it made up for the chaos of her home life. Having to stash her daughter in a dilapidated Bayswater hotel room while she waited for new accommodation was tough on both of them. She always warned Doto to stay in her room because some of the residents looked untrustworthy, especially the badly shaved men who hung around the lobby.

Sammi saw that she was four minutes behind schedule and quickened her step, heading towards the barrier of clipped hedges that marked the park’s Outer Circle. A sudden breeze swept over the parklands in a twisting undertow that ruffled the feathers of swans and ducks, fluttering the new foliage on the trees.

The park’s curving road was among the quietest and most beautiful in the capital. Sammi wondered if she would be able to escape today’s event by eight. She needed to press her uniform, get Doto’s dinner, pay off all of her outstanding bills. Time out of work needed to be minutely planned.

The black and grey Daimler was a dinosaur of a vehicle, its heavy polished panels fronted with an immense chrome radiator grille and six lamps. It was travelling at surprising speed around the park’s outer perimeter.

Larry Cranston had a naturally bad-tempered outlook coupled with the twitchy impatience of someone in a long queue. Although he thought a lot, very little came of it, and right now his mind was far away.

He needed to make some big money fast, before his debts were called in. There were some people you could delay paying back, like your tailor or your vintner, and others you simply could not mess around. He ran through a list of names, trying to recall how his credibility stood with each of them. The importer from Guangzhou had seemed amenable but could turn nasty. He knew some very unpleasant people. What was his name?

Cranston failed to see the crossing because he was trying to remember how much interest he owed the importer. If he had looked up he would have seen a small woman in a hurry, a flash of red sweater, short black hair, a blue nylon backpack. His nearside headlamp caught a jeaned leg and snagged the material, spinning something under the front wheel of the car so that one moment she was on the crossing and the next gone.

The Daimler slammed to a stop, as much as it could. Cranston clambered out and looked about himself. There was no one around to see what had happened. He began to doubt that he had even glimpsed someone on the crossing.

When he dropped to his knees and peered under the nearside tyre he saw what looked like a bundle of clothes. Cranston’s whisky-fogged brain began to reconstruct what had just happened.

The body was dark and tiny, trapped beneath the Daimler’s rear nearside wheel and its arch. It looked terribly smashed up, the ribs quite flattened, but he could see no blood. He peered closer: a slender hand, a twisted shoe, a split bag. There was obviously nothing he could do for her.

He couldn’t simply drive off. Although the road was utterly deserted there were cameras everywhere protecting the embassies and residences. He could be seen from a dozen different angles.

Cranston put his hand to his mouth. His breath was rank with alcohol. He needed to get to a pub and down a brandy or two, then say he’d needed a drink to steady his nerves after the accident. Because it was an accident, her suddenly jumping out like that without any warning. Actually, it was her fault for not looking properly.

He heard a groan from beneath the car. Was she still alive or was it the metal settling? He bent down. He was sure that an eye was fixing him accusingly.

‘Listen, don’t try to move, okay? You’ve had a bit of a nasty tumble. I’m sorry if you feel I was going too fast. I’m off to get help.’

Making his way over to the Windsor Castle, he entered the deserted bar and ordered himself a large Rémy Martin, downing it with shaking hands. Then he called the police.

Christopher Fowler is the acclaimed author of the award-winning Peculiar Crimes Unit mysteries: Full Dark House, The Water Room, Seventy-Seven Clocks, Ten Second Staircase, White Corridor, The Victoria Vanishes, Bryant & May on the Loose, Bryant & May off the Rails, The Memory of Blood, The Invisible Code, The Bleeding Heart, The Burning Man, Strange Tide, Wild Chamber, Hall of Mirrors, The Lonely Hour and the upcoming Oranges & Lemons. In 2015 Fowler won the coveted Crime Writers’ Association Dagger in the Library Award in recognition for his body of work. He lives in London, where he working on his next Peculiar Crimes Unit novel. 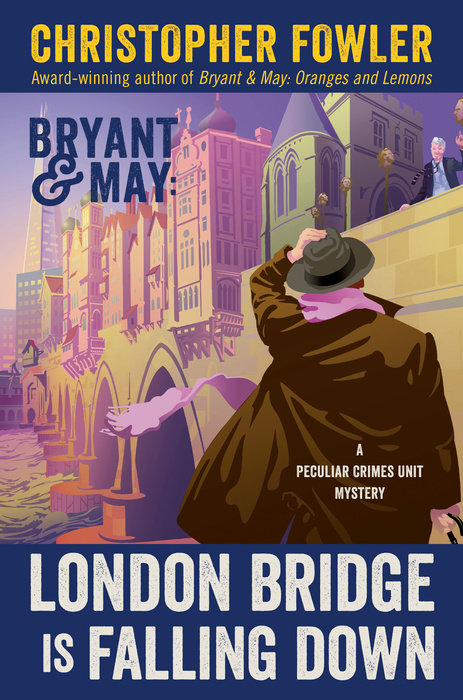