Thinking of a jaunt to England? Let Arthur Bryant and John May, London’s oldest police detectives, show you the oddities behind the city’s façades in this tongue-in-cheek travel guide.

“The best fun is running all over the city with these amiable partners.”—The New York Times Book Review, on Bryant & May: The Lonely Hour

It’s getting late. I want to share my knowledge of London with you, if I can remember any of it.

So says Arthur Bryant. He and John May are the nation’s oldest serving detectives. Who better to reveal its secrets? Why does this rainy, cold, gray city capture so many imaginations? Could its very unreliability hold the key to its longevity?

The detectives are joined by their boss, Raymond Land, and some of their most disreputable friends, each an argumentative and unreliable expert in their own dodgy field.

An excerpt from Bryant & May: Peculiar London

A Big Lump of Rock & Other Stories

Arthur Bryant: If history consists of what you can remember, I’m buggered.

I had my glasses in my hand a minute ago and now they’ve gone. And I’ve put a bag of chips down somewhere. I’m up in the PCU’s evidence room, where we keep the impounded booze and my notes on London. I say notes. Not everything is legible. We have mice.

For years my walking tours around the capital were simply an evening job attended by retired archivists, socially awkward loners and the kind of people who shout about Jesus in public. They required me to argue with strangers, something I previously had little interest in doing if it didn’t involve arresting them.

Rather than let this lot go to waste I decided to share it with you on a sort of virtual tour. I don’t actually know what a ‘virtual’ tour is. John May tried explaining it but my attention drifted when he said ‘online.’ By the time he got to the metaverse I was sound asleep. He set me up on a Zoom call with Scotland Yard last week but I somehow ended up on a Welsh radio programme about knitting.

I can’t compete with the kind of passionate historians who know how many double-­decker buses you can fit into the Albert Hall, but I’ll be making some connections that may take you by surprise. They certainly took me by surprise, not always in a good way.

Let’s see if I can get this thing working. I found a cassette recorder up here that used to belong to one of the Kray twins. I erased the old tapes; you don’t want to listen to some bloke screaming for two hours.

London was established by the Romans as a trading centre and that’s what it still is. Almost everything else is based around ceremony and entertainment. You won’t find anything here about the Little Venice Dragon Boat Pageant, the Bethnal Green Morris Dancers, the Bastille Day Waiters’ Race or the Dagenham Girl Pipers, who for some unearthly reason became the punchline to many London jokes. A lot of the ceremonial events that take place in London occur in various forms around the globe, so they’re not covered. The only fun thing about Trooping the Colour is waiting for guards to pass out on hot days, and you can read about Westminster Abbey anywhere (although I bet not everyone knows it’s a ‘Royal Peculiar,’ meaning it belongs to the reigning monarch and not the Church). I’m more interested in exploring the obscure and unique. And I’m not sticking in loads of addresses. If you want those you can use the Googly-­thing on your phone.

It was the heart of the British Empire, the largest and wealthiest colonial power on the planet. There are only twenty-­two countries in the world that we didn’t invade. This expansion began in the 1600s and didn’t come to a final end until 1997, when Hong Kong was handed back to China. So it makes sense to set our focus here.

The first thing you notice in Central London is the variety of buildings dating from so many different eras. When you wish to dignify a new town you first construct some municipal buildings based on classical Greek and Roman ideals. That’s why there are still so many boring government offices that look like temples. Whitehall is a civil servants’ Xanadu of Corinthian pillars and white stone pediments, especially when seen from across the lake in St James’s Park. But grand buildings aren’t enough to make you respect politicians. ‘The higher the buildings the lower the morals,’ said Noël Coward with some prescience. They don’t build mock temples anymore. They commission global architects to design giant glass willies.

Three things transformed London: the Reformation, the Great Fire, the railways and the Blitz.

Arthur Bryant: You’re not on yet, John. Wait for your cue.

Actually there’s another thing, the revolt of the Iceni, but London as such didn’t really exist that far back.

John May: So, five things. And you have to hold both those keys down to record.

Arthur Bryant: I’ve used a cassette player before. Believe it or not, I was once a big fan of new technology.

John May: How am I only just hearing this? Why did you stop?

Arthur Bryant: I bought the K-­Tel Bottle Cutter and nearly severed my lips. Let’s push on.

For me there is always a gap between what you read about a city and what you feel when you walk around it. I shall attempt to bridge that gap. I’ve assembled these observations with the help of my partner here, Mr John May, who took out some of the stuff that didn’t exist and removed the more libellous remarks so that I wouldn’t get attacked in public again.

The problem with London is its past.

Even though we often show a shocking disregard for it, it gets in the way of everything. We still build along the routes of ancient hedgerows and riverbeds, and our homes still follow Victorian principles even though the way we live has radically changed in the last seventy years. Our buildings have been repurposed, rebuilt, retouched and replaced. Look to the higher floors in Oxford Street and Tottenham Court Road and you may find a rococo plaster palace surviving above a hollowed-­out discount-­clothing store.

Nothing about the foundation of London is certifiably true. It’s said that nine centuries before Christ, the leprous wolf-­lord Bladud was the first British monarch to die in an aviation accident when his wings came off over the settlement of London. I don’t entirely buy the story myself.

A better starting point for all this is the London Stone.

Until recently it sat behind a grille on Cannon Street in London’s Square Mile, an unprepossessing lump of oolitic limestone about three feet wide. It had earlier been wedged somewhere on Candlewick Street, now gone, and had been blessed by Brutus himself, except that’s just a legend. Brutus certainly didn’t say, ‘While this stone is protected London shall flourish,’ because apart from the fact that he spoke Latin, why would he? It’s manufactured history retrofitted for convenience, a nice little legend that adds a touch of colour.

But the London Stone did have some significance. It might have been a milestone from the Roman Forum, used to measure distances from the capital. Perhaps it was brought on a ship to symbolically found London, although it’s more likely that it came from here. It was certainly mentioned in the twelfth century. Did it once exist as a Roman pillar rather than a crumb of rock? It doesn’t seem to have got any smaller since. And did the rebel Jack Cade really strike his stick on it during the fifteenth century’s biggest protest, Cade’s Rebellion? Cade ended up being dragged through the streets and quartered, which was what happened back then if you complained about corruption in local government.

So, why have we bothered to hang on to an ugly, insignificant lump of rock of obscure origin? The truth is, we simply don’t know. Over time, the London Stone became an object upon which to project our own ideas about the city. And like so much else in London, it survives unnoticed and barely commented upon.

Tenure of the Stone passed with the ownership of the land on which it stood for nearly three hundred years, the site of St Swithin’s Church. Its final guardian was not Chaucer’s ‘parfit gentil knight’ but the branch manager of WHSmith, the newsagent’s shop that occupied the property. He probably let customers touch it if they bought a copy of Razzle and a Galaxy bar.

But there are other such objects dotted around the city. There’s a huge polished stone outside University College Hospital off Tottenham Court Road that nobody venerates, yet here are sick people entering a house of healing: why don’t they stroke it for luck? It’s the people who decide what to honour; governments can’t force us. If we think something has a bit of history behind it, just an odd anecdote, we’re more likely to fight for its survival.

Yet even when I poke about in the past I can’t truly know what it was like to be there. No two experiences of London are the same and any attempt to convey their fullness is doomed to failure. A timeline of Soho will take you from hunters’ marshlands to rowdy coffee houses and walking its streets will give you a sense of its geography, but little can recapture its zeitgeist. The political, literary, gastronomic and artistic characters who lived there have nearly all gone, leaving behind a neighbourhood of ghosts.

Christopher Fowler is the acclaimed author of the award-winning Peculiar Crimes Unit mysteries: Full Dark House, The Water Room, Seventy-Seven Clocks, Ten Second Staircase, White Corridor, The Victoria Vanishes, Bryant & May on the Loose, Bryant & May off the Rails, The Memory of Blood, The Invisible Code, The Bleeding Heart, The Burning Man, Strange Tide, Wild Chamber, Hall of Mirrors, The Lonely Hour and the upcoming Oranges & Lemons. In 2015 Fowler won the coveted Crime Writers’ Association Dagger in the Library Award in recognition for his body of work. He lives in London, where he working on his next Peculiar Crimes Unit novel. 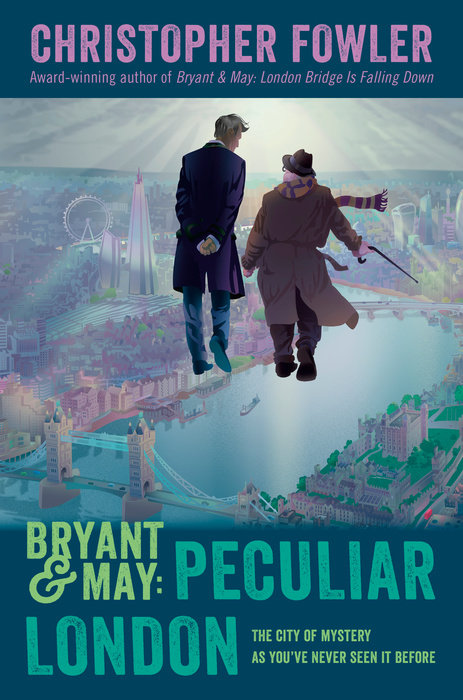