Three ordinary people risk everything for a chance at redemption in this audacious, utterly gripping novel of catastrophe and survival at the end of the world, from the acclaimed author of The Chalk Man.

“[A] tour de force . . . This is a masterpiece of its kind.”—Publishers Weekly (starred review)

Hannah awakens to carnage, all mangled metal and shattered glass. Evacuated from a secluded boarding school during a snowstorm, her coach careered off the road, trapping her with a handful of survivors. They’ll need to work together to escape—with their sanity and secrets intact.

Meg awakens to a gentle rocking. She’s in a cable car stranded high above snowy mountains, with five strangers and no memory of how they got on board. They are heading to a place known only as “The Retreat,” but as the temperature drops and tensions mount, Meg realizes they may not all make it there alive.

Carter is gazing out the window of an isolated ski chalet that he and his companions call home. As their generator begins to waver in the storm, something hiding in the chalet’s depths threatens to escape, and their fragile bonds will be tested when the power finally fails—for good.

The imminent dangers faced by Hannah, Meg, and Carter are each one part of the puzzle. Lurking in their shadows is an even greater danger—one with the power to consume all of humanity.

An excerpt from The Drift

A watch alarm was beeping. Someone was being sick. Loudly, close by. Several people were sprawled at odd, impossible angles over the uprooted coach seats. Blood pooled in eyes and dripped from gaping mouths.

Hannah noted this dispassionately, clinically. Her father’s nature kicking in, her mother would have said. Always able to detach. Sometimes, this lack of emotional empathy made life difficult. Other times, like now, that side was useful.

She unclipped her seatbelt and eased herself out of her seat. Wearing the belt had probably saved her life when the coach tipped over. It had rolled twice down a steep slope, causing most of the carnage, and then come to rest softly, propped half on its side, embedded in a snowdrift.

She hurt. Bruises, scrapes, but nothing seemed to be broken. No massive bleeding. Of course, she could have internal injuries. Impossible to know for sure. But for now, in this immediate moment, she was okay. Or as okay as she could be.

Others were moving. Hannah could hear groans, crying. The hurler had stopped, for now. She looked around the coach, assessing. There were a dozen students on board. They hadn’t really needed such a big coach, but it was what the Academy had provided. Of the students, she’d say almost half were dead (mostly those who hadn’t bothered with their seatbelts).

There was something else, Hannah thought, as she took in the scene. A problem she hadn’t fully comprehended yet. Snowstorm outside, coach tipped over and half buried in a drift. What was it? Her thoughts were interrupted by a voice shouting:

“Hey. HEY! Can someone help over here? My sister, she’s trapped.”

Hannah turned. At the back of the coach an overweight young man with a mass of dark curls was crouched over an injured girl, cradling her head on his lap.

Hannah hesitated. She told herself she was just gathering her wits, preparing. Not that she was hoping someone else would move forward, step up, so she didn’t have to. She didn’t like close physical or emotional contact. But no one else was in any fit state to help, and as she had medical knowledge, it was her duty. She started to move forward, awkwardly, stumbling her way along the lopsided gangway, stepping over bodies.

She reached the man and his sister. Straight away, she could tell, as they said in the movies, that the girl wasn’t going to make it. This had nothing to do with the stuff Hannah had learned in the classroom during her medical training. That was just a plain, honest gut reaction. Hannah was pretty sure the girl’s brother knew it too, but he was clinging to hope, as people do in these situations, because it was all they had.

The girl was pretty, with pale skin and thick, wavy, dark hair. The sort of hair Hannah had always wished she’d been blessed with, instead of the fine, mousy strands that she could never do anything with and always ended up yanking back into an untidy ponytail. Hannah realized it was probably odd to feel envy when the girl was dying, but human nature was unpredictable.

The girl’s eyes were glazed, her breath short and wheezy. Hannah could see that her left leg was trapped beneath two coach seats that had been forced together in the crash. A mess of mangled metal and crushed bone; she probably had multiple fractures. But the blood loss was the real problem, and that was before you got to the wheezy hitch of the girl’s breathing, which made Hannah think she could have other, less visible, injuries. Those were the ones that would get you. The British princess—Diana—had died from a small tear in the vein of her lung that no one knew was slowly, fatally, bleeding out.

“We need to get her leg free,” the man was saying. “Can you help me move this seat?”

Hannah looked at the seat. She could tell him that it wouldn’t make any difference. She could tell him that the best he could do would be to stay here with his sister for however long she had left. But she remembered her father telling her: “In extreme situations, feeling like you are doing something makes a difference psychologically, even if it has no effect on the outcome.”

She shook her head. “We can’t move the seat yet.”

“It may be the only thing stopping that leg from bleeding out more than it is.”

“Are you wearing a belt?”

“I need you to take it off and make a tourniquet here, above the knee. Then we can try to move the seat, right?”

“Okay.” He looked dazed, but nonetheless fumbled beneath his coat to take off his belt. His stomach spilled over his jeans. His sister stared up, lips moving but unable to force words out. Every effort concentrated on fighting the pain, sucking in those vital gasps of oxygen.

“You look a little young for a doctor,” the man said, handing her the belt.

The Academy did not specialize in medicine. Generally, it specialized in parents rich enough to buy their offspring an obscenely expensive college education. But a few years ago it had been chosen by the Department as the location for a new medical research center. An extra wing had been built and Professor Grant, one of the world’s leading virologists, installed to oversee the development. Now, brilliant young students from around the world were selected to study at the isolated mountaintop campus.

The girl groaned a little, but that was a good sign. If she was still conscious enough to feel discomfort, her brain hadn’t started shutting down yet.

“It’s okay,” the man whispered into the girl’s hair, tucking some of his own dark mane behind his ear. “S’okay.”

The man laid his sister’s head gently down and joined Hannah in trying to heave up the coach seat. It was no good. It creaked and gave a little, but not enough. They needed another person. Two to lift. One to pull the girl’s leg out from underneath the twisted metal.

Hannah could hear more voices, movement around the coach, people coming to, ascertaining whether their companions were still alive, or not.

She turned and yelled: “Hey, we need a hand here! Can someone help?”

“Kind of busy over here,” one smart Alec from further up the coach replied.

But then a tall, slim figure stood and made his way toward them. Pale, short blond hair, matted on one side with blood. It looked bad, but Hannah knew that even small head wounds bled like bastards.

“You called?” His voice was cultured, with a slight German accent.

“We need some help lifting this chair so we can free her leg,” Hannah said.

The blond man looked at the girl, then back at Hannah, and she saw the cool appraisal in his eyes. She shook her head slightly and he nodded, understanding.

Hannah allowed the two men to do the lifting while she eased the girl’s leg out from underneath the seats. It took a couple of attempts, but finally, the leg was free.

The girl’s brother moved his sister to a slightly more comfortable position, whipped off his jacket and placed it underneath her head. Beneath his coat, he was wearing a baggy sweatshirt that read: Excuse me for a moment while I overthink this. Weird, Hannah thought, the small stuff you noticed.

She felt a hand touch her arm and turned back to the blond-haired man. Aryan, Hannah thought. He’d look at home in lederhosen and a hat with a feather in it.

“How many do you think are dead?” he asked.

“Four or five—others may be injured.”

He glanced at the girl and nodded. “D’you remember what happened?”

Hannah tried to think. She had been sitting on the coach, dozing. It was snowing heavily outside. A horn blare. A squeal of brakes and suddenly they were swerving off the road, rolling and rolling, and then blackness. Crazy that they had even tried to make the journey in this storm, but the Academy had been eager to get the students out to the Retreat. To safety.

C. J. TUDOR is the author of The Burning Girls, The Other People, The Hiding Place, and The Chalk Man, which won the International Thriller Writers Award for Best First Novel, the Barry Award, and the Strand Critics Award for Best Debut Novel. Over the years she has worked as a copywriter, television presenter, voice-over artist, and dog walker. She is now thrilled to be able to write full-time, and doesn’t miss chasing wet dogs through muddy fields all that much. She lives in England with her partner and daughter. 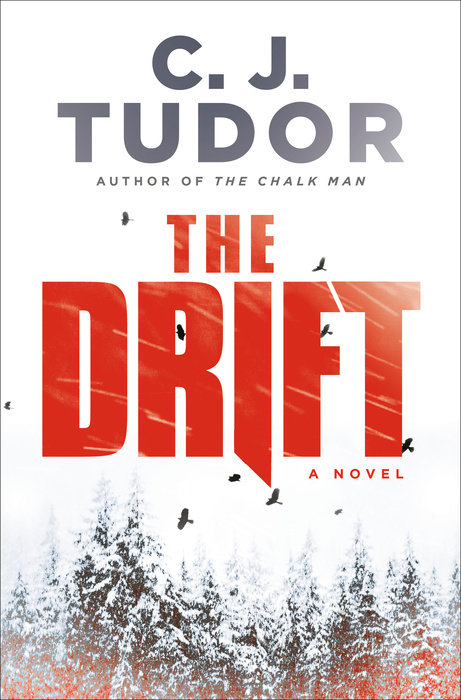