In the first book of a visionary fantasy trilogy with its roots in the mythology of Africa and Arabia that “sings of rebellion, love, and the courage it takes to stand up to tyranny” (Samantha Shannon, author of The Priory of the Orange Tree), three women band together against a cruel empire that divides people by blood.

“The Final Strife is the real deal: epic fantasy turned on its head in the most compelling way imaginable.”—Kalynn Bayron, bestselling author of Cinderella Is Dead and This Poison Heart

ONE OF THE MOST ANTICIPATED BOOKS OF 2022—Book Riot

Sylah dreams of days growing up in the resistance, being told she would spark a revolution that would free the empire from the red-blooded ruling classes’ tyranny. That spark was extinguished the day she watched her family murdered before her eyes.

Anoor has been told she’s nothing, no one, a disappointment, by the only person who matters: her mother, the most powerful ruler in the empire. But when Sylah and Anoor meet, a fire burns between them that could consume the kingdom—and their hearts.

Hassa moves through the world unseen by upper classes, so she knows what it means to be invisible. But invisibility has its uses: It can hide the most dangerous of secrets, secrets that can reignite a revolution. And when she joins forces with Sylah and Anoor, together these grains of sand will become a storm.

As the empire begins a set of trials of combat and skill designed to find its new leaders, the stage is set for blood to flow, power to shift, and cities to burn.

Book One of The Ending Fire Trilogy

An excerpt from The Final Strife

The Day of Descent

I have been searching for any trace of the Sandstorm to complete my tale. Though the wardens claim to have killed them some years ago, I have no confirmation of where or when. It may be my aging eyesight, but I can’t see the end of the story. The rumors are thin, wisps of smoke that I can’t grasp. I will continue to search. I will continue to hope.

The drumbeat still thrummed through Sylah’s veins as she weaved her way back home.

The raw pink of dawn promised a blistering heat, and Sylah tilted her head and basked in the sun’s rays. The trinkets in her braids chimed.

She ran her tongue over the joba seed tucked in the gap between her front teeth. The warmth induced by the seed was dissipating, leaving her cold. Hugging her arms to her chest, she noticed for the first time she held an empty bottle of firerum. She threw it at the wall of a derelict villa, which was filmed with blue sand. It had been a strong wind last night. At times its pounding had even eclipsed the drums.

But not the drumbeat in her memory.

The sound came again and with it an unmistakable tremor of fear that woke people from their beds. Now Sylah listened and realized she knew the cadence of the rhythm, and it wasn’t from the song in her mind. It was the pounding of the Starting Drum, indicating the beginning of a trial.

It was the sound of death.

Dredge-dwellers began to seep out of their decrepit homes and stream toward Dredge Square. Sylah found herself being carried along in the current.

The square was full of Dusters and Ghostings, blurry-eyed from a night of drugs, sex, or alcohol. Or in Sylah’s case, all three. A dozen officers of the warden army stood to attention in front of the rack, the wooden device used for executions. Like ripe bruises, the army’s purple uniform was enough to instill fear in anyone north of the Ruta River—anyone without red blood.

Sylah spotted Hassa in the crowd and pushed her way toward her.

Like the beetle she had been named after, Hassa was small with dark eyes. The color was unusual for a Ghosting, as light-colored eyes were often a feature of their translucent blood. But it didn’t matter if you were a Ghosting or Duster, everyone who lived in the Dredge had the same hollowed-out look. It was a mandatory uniform, an expression of squalor and poverty enforced by malnutrition and childhood labor.

You look like shit. Have you even slept? Hassa signed.

Sylah ignored Hassa’s observation and pointed toward the officers. “Have you seen this guy’s talent?”

Hassa followed Sylah’s gaze to the officer with the Starting Drum strapped to his chest. He was beating the rhythm with absolute dedication, his muscles clenching and releasing with military precision.

He was born to play the drums, Hassa agreed.

Sylah snorted. “Bet he wanted to join the playhouse, but his mother made him enlist in the army. Poor little Ember.”

Hassa smiled, revealing the spongy flesh of her severed tongue. Her tongue, like her severed hands, had been taken from her at two mooncycles, like they were for every Ghosting in the empire. Their limbs and tongues were cut off and sent to the wardens to tally against the number of Ghosting births as a penance for a rebellion four hundred years old. As a result, Ghostings had developed a complex language that used all elements of their body. It was a subtle language, one invented in defiance of the rulers that still condemned them.

The drum stopped, though the vibrations of dread rippled out for moments afterward. The captain, identified by his striped green kente epaulettes, stepped forward.

“In the name of the four wardens, blessed by Anyme, our God in the Sky, we bring forth the accused.”

A prisoner in shackles was brought forward between the officers’ ranks. Sylah inhaled sharply between her teeth. “A griot.”

They raided his villa a few strikes ago, no warning, Hassa signed. He told his final story last night.

Sylah vaguely remembered a griot entering the Maroon, but she had been preoccupied with chewing a record number of joba seeds.

“What did they get him for?”

Bastards, Hassa agreed, using her left wrist against her shoulder in a slashing motion.

Sylah scowled up at the podium where the officers stood. How she hated them and everything they represented: fear, oppression, pain. She rubbed her neck as the captain continued.

“The accused deliberately and maliciously plotted and engineered acts of rebellion against the Wardens’ Empire through the written word. A crime punishable by death. May Anyme be our guide. May Anyme absolve you of your sins.”

The griot’s head hung low, his gray locs trailing the dirt in front of him.

“We pronounce you guilty of treason.”

A hush fell over the crowd as a ripper was spotted.

Rippers were Dusters, forced to turn on their own kind. It was their job to turn the lever that separated the two jaws of the rack. Their uniform was deep blue. Less washing that way.

Sylah shivered and ran her tongue over her teeth probing for any residual joba seed juice, but the husk was dry. She spat the remains onto the ground.

“Ach.” Hassa bared her teeth at the globule on the ground.

Hassa signed the word again. Sylah had been learning to understand the Ghosting language since she’d met Hassa six years ago, but she still stumbled now and then. “Ah, red.” The two words were differentiated by an additional turn of the elbow. “Well, I don’t care.”

You should. The drug is very bad for you, it could kill you. The sign for “kill” was a wrist across the throat. For some reason the gesture made Sylah smile.

Sylah met Hassa’s stare and reached into the satchel at her waist. She pulled out her final seed and, with precision, squished it into the gap between her front teeth. The bitter juice took effect immediately, and she closed her eyes for a blissful moment.

The euphoria vibrated through her veins faster than the tidewind. The feeling was so loud, so all-encompassing, that she was carried away from the scene before her.

But she’d seen enough rippings to know what happened next.

The prisoner would be chained to the rack’s wooden bed with four manacles separating their limbs wide. Then the ripper would turn the lever and with each turn spread the wooden bed—and with it, the prisoner’s limbs—even wider. First you would hear the prisoner’s joints popping, then the cartilage tearing. Eventually, the skin would rupture, blue blood dripping. Sometimes a larger chain was wrapped around their midriff, so that their limbs were left intact, but their vital organs cleaved apart with each click, click, click of the lever.

Embers were never subjected to the horror of a ripping; their trials involved courtrooms and juries, although occasionally Embers would cross the Ruta River to watch those who had been condemned for doing something particularly nasty. The rack was tilted toward the audience for this very purpose. Nothing better than a family outing to watch a rapist get ripped to shreds.

If Sylah were in charge, the rippings would be the first thing to go, the racks broken, the splinters scattered like confetti.

Sylah opened her eyes, her blissful contentment at odds with the horror: fourteen turns of the rack and the griot was still alive.

Sylah whistled softly. “This griot’s got some real stomach.” A laugh burst out of her. “Well, no, I guess he hasn’t.” She gestured to the entrails on the ground.

People around her murmured sounds of dissent.

But the joba seed saturated Sylah with confidence.

“Why should I be quiet? What’s the point when it could be any of us next?”

Hassa turned to Sylah and pushed her backward through the crowd. Though Sylah stood two handspans taller than Hassa, the joba seed robbed her of her stability, and Sylah drifted backward like a feather.

Sylah, get up. Hassa was standing over her.

“When did you get up there?” The warmth of the joba seed enveloped her, and as exhaustion settled within her bones she lay backward, her plaits fanning out.

They were braided with trinkets, fragments of a family she no longer had and that carried with them the frayed threads of memories and so were cherished above all else. Some she wove lovingly in her hair each mooncycle. Others, a leaf, a melon rind, had simply appeared uninvited and masqueraded as valued tokens.

Saara El-Arifi's heritage is intrinsically linked to the themes she explores in her writing. She was raised in the Middle East until her formative years, when her family swapped the Abu Dhabi desert for the English Peak District hills. This change of climate taught her what it means to be Black in a white world. The Final Strife is Saara El-Arifi's debut novel, the first part of a trilogy inspired by Ghanaian folklore and Arabian myths. 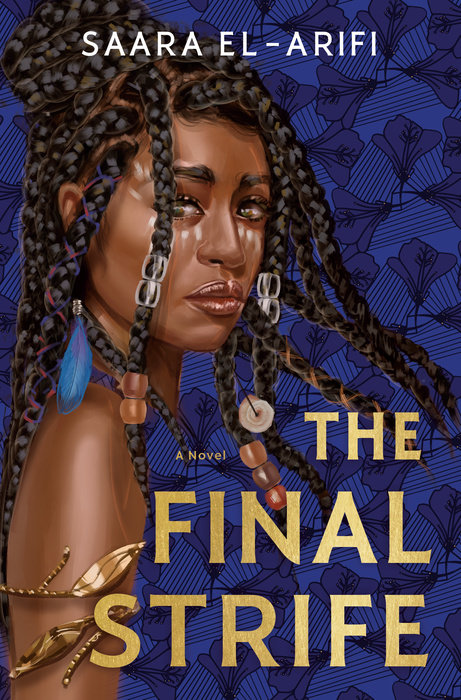