A Pediatric Neurosurgeon, His Young Patients, and Their Stories of Grace and Resilience

“The surgical interventions in these pages are dizzying, but the fact that Jay Wellons can write as well as he can operate provides a whole other level of amazement.”—Ann Patchett, #1 New York Times bestselling author of Commonwealth

“A powerful and moving account of the intense joys and sorrows of being a pediatric neurosurgeon.”—Henry Marsh, New York Times bestselling author of Do No Harm: Stories of Life, Death, and Brain Surgery

Tumors, injuries, ruptured vascular malformations—there is almost no such thing as a non-urgent brain surgery when it comes to kids. For a pediatric neurosurgeon working in the medical minefield of the brain—in which a single millimeter in every direction governs something that makes us essentially human—every day presents the challenge, and the opportunity, to give a new lease on life to a child for whom nothing is yet fully determined and all possibilities still exist.

In All That Moves Us, Dr. Jay Wellons pulls back the curtain to reveal the profoundly moving triumphs, haunting complications, and harrowing close calls that characterize the life of a pediatric neurosurgeon, bringing the high-stakes drama of the operating room to life with astonishing candor and honest compassion. Reflecting on lessons learned over twenty-five years and thousands of operations completed on some of the most vulnerable and precious among us, Wellons recounts in gripping detail the moments that have shaped him as a doctor, as a parent, and as the only hope for countless patients whose young lives are in his hands.

Wellons shares scenes of his early days as the son of a military pilot, the years of grueling surgical training, and true stories of what it’s like to treat the brave children he meets on the threshold between life and death. From the little boy who arrived at the hospital near death from a gunshot wound to the head, to the eight-year-old whose shredded nerves were repaired using suture as fine as human hair, to the brave mother-to-be undergoing fetal spinal cord surgery, All That Moves Us is an unforgettable portrait of the countless human dramas that take place in a busy modern children’s hospital—and a meditation on the marvel of life as seen from under the white-hot lights of the operating room.

An excerpt from All That Moves Us

Throughout the spring of 2020, our hospital, like many others, was consumed with preparation for the pandemic. As colleagues on the West Coast affected by the earliest North American wave recounted their initial experiences via group call, social media, or text thread, the overall sense became bleak. Instead of performing surgery, I was tasked with sifting through rapidly incoming data (some valid, some not) as part of a perioperative committee that stood up to prepare for the anticipated surge of patients. Service teams were quickly boiled down to the most essential; operative procedures were canceled unless deemed urgent; all non-clinical personnel were sent home.

Into this, a twelve-year-old presented comatose with a ruptured brain arteriovenous malformation (AVM). A few hours earlier, she and her family had been following the state and local stay-at-home order by gathering to watch a Harry Potter movie marathon when she began to complain of a severe headache. Within minutes she was unresponsive.

This is the most challenging aspect of pediatric neurosurgery, the constant sense of impending calamity that spills over into your life outside work. Over the years, you become so conditioned to emergencies that the random becomes the reliable.

One minute it’s popcorn and Harry Potter with the family, and then suddenly your daughter has the worst headache of her life and seizes from a brain hemorrhage.

Or a child eating breakfast before school slumps down into their cereal, the parents believing it’s a gag until the terrible realization dawns that it’s not.

Brakes on a bike that fail and into traffic your thirteen-year-old goes.

A father who turns his head while driving just to make sure his two-year-old’s car-seat harness is on correctly, then runs off the road into a tree. Two days later he and his wife, still in neck braces and wheelchairs from the accident, have to make the decision to take their child, never to recover, off the ventilator.

These all roar at me in what must be normal moments for everyone else. A car seat was not just an inconvenient safety chore. It became as important to me as the moment the technicians would secure the Apollo astronauts into their safety harnesses before launch. Seeing my son jump helmetless onto a friend’s skateboard spontaneously triggers memories of open depressed skull fractures rushed into the OR at 2:00 in the morning, someone’s child’s blood saturating my scrub pants all the way through until the material is pasted on my skin. Every moment in the car, every meal together, every time my children leave the house, if I let myself slide, I see the Jaws of Life, or a seizure, or a policeman knocking on my door.

At an emergency room near the twelve-year-old girl’s home, a breathing tube had been inserted and mechanical ventilation was started, a lifesaving intervention to buy time. A CT scan had revealed a large blood clot inside the left frontal lobe of her brain pushing over to the right, and the hint of a small offending tangle of blood vessels, the AVM, just under the normally unperturbed surface. A doctor at the outside emergency room two and a half hours away had correctly made the diagnosis of a ruptured AVM and drilled a small hole through the skull to place a drain in the cerebral ventricles. This does two main things. It helps to reduce the pressure that can build up quickly inside the skull in situations like a brain hemorrhage, trauma, or a brain tumor, by physically draining the built-up CSF—cerebrospinal fluid—inside the brain. That drain also acts as a pressure monitor when connected to a bedside display. Having that number, the intracranial pressure, to follow then enables the nurses and doctors to infuse special intravenous medication that helps to lower that pressure and buy a little extra time for definitive care.

AVMs are among the most difficult operations we do. In normal circumstances, arteries are thick-walled and carry oxygenated blood under high pressure from the heart to the brain (and the rest of the body for that matter). That blood pressure then dissipates as the arteries continue to divide into smaller and more numerous arterioles and then finally until they turn into tiny capillaries. The capillary bed in most organs is made up of thousands of tiny vessels, each one the width of an individual red blood cell, and the oxygen within that cell is delivered through the capillary wall to the organ in need. That loss of oxygen is what causes the blood to lose its bright red color and turn darker, bluish. The deoxygenated bluish blood is under lower pressure on the other side of the capillary bed and begins to drain into larger and larger thin-walled veins that channel the blood back to the lungs for more oxygen and then to the heart for the pressure of the beating heart to propel the blood back along its way.

An AVM basically short-circuits that pathway. Typically present in a much smaller form since birth, these grow over time and can come to cause seizures, headaches, or even rupture acutely, like in this young girl. Instead of the normal pattern of flow from artery to vein through the capillary bed that dissipates the pressure evenly, those larger, high-pressure, thick-walled vessels containing oxygenated bright red blood drain directly into thin-walled veins that are not designed to handle the higher pressure coming from the heart. Over time, those thin-walled veins begin to collapse and coil around one another, the red blood jetting directly into the veins, arterializing the veins—making them red, angry, abnormal. Under the high magnification of the operating microscope, you can see the red and blue blood mixing and swirling through the vessels as the AVM pulses menacingly with each heartbeat.

When the outside physician called me before putting in the drain, it was just past midnight. The procedure and subsequent transfer took a few hours, and she arrived around 6:00 a.m. We brought her to the operating room soon afterward, first anesthesia and then the OR nurses converging on her quickly.

It’s at this point, as we were set to proceed, that I had a way-too-quick talk with her mother about the possibilities. Often when patients arrive via emergency transport, they are given aliases just to quickly move through the electronic medical record and hospital system. This is when I learned from her mother that our patient’s name was Sophia. I then had to tell her that Sophia could die or be permanently disabled from the initial AVM rupture, or she could die or be permanently disabled by the surgery to take it out. To be clear, permanently disabled means unable to move one side of her body, or mute, or alive on a machine, never to awaken. As I steel myself for conversations like these, while also focusing on the operative task at hand, I now find that I try to actively decouple the part of me who is a parent of children from the part of me who must operate on this very sick child. I imagine myself pressing on something like a clutch in my head in order to leave the parent part of my psyche spinning and disengaged from the surgeon. If I did not do this, then the concept of what this woman and all the parents over the years are going through at this very moment would become nearly overwhelming to consider. The truth is that I see it as a kind of weakness in these moments, one that a neurosurgeon should be able to keep under control. Letting my thoughts go, letting any control up, could undo me as I think back to first bike rides and soccer games and settling arguments and all the things that make up parenting of my own children.

I can fathom how hard this must be, and our whole team desperately wants to save your child, I promise. I want to tell you that everything is going to be all right and take away this pain you are feeling. But I need to decouple and to get down to the task at hand. Our best OR team is back there, and they’ve all been diverted to other things during this new era too, but now they are ready to get to work in the operating room. But in order to do that, we will all need to pull ourselves back just enough. Just enough to sterilize the operative field and drape one side of her head with towels and turn this person from your beloved daughter to a prepped-out rectangle, the person beneath otherwise covered in sterile drapes, so that all we will soon see is a window into the problem that we believe deeply we know how to solve.

Jay Wellons, MD, MSPH, is a professor in the departments of neurological surgery, pediatrics, plastic surgery, radiology, and radiological sciences at the Monroe Carell Jr. Children’s Hospital at Vanderbilt and the Vanderbilt University Medical Center. He holds the Cal Turner Chair, is the Chief of the Division of Pediatric Neurosurgery, and is the medical director for the Surgical Outcomes Center for Kids (SOCKs), which he co-founded. He has written op-eds for The New York Times. Jay Wellons lives in Nashville, Tennessee, with his family.

A Pediatric Neurosurgeon, His Young Patients, and Their Stories of Grace and Resilience 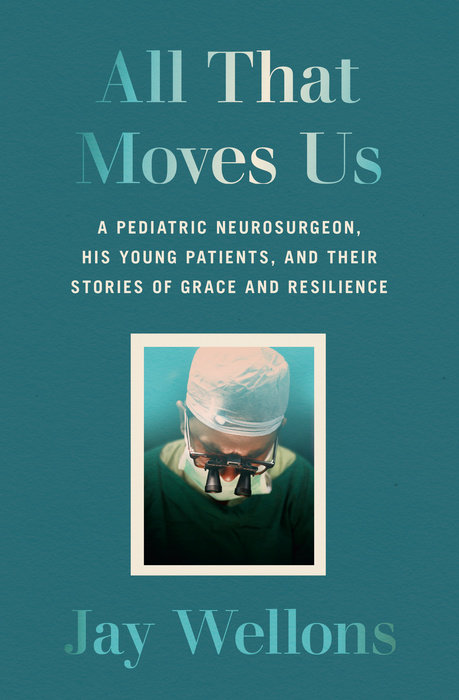