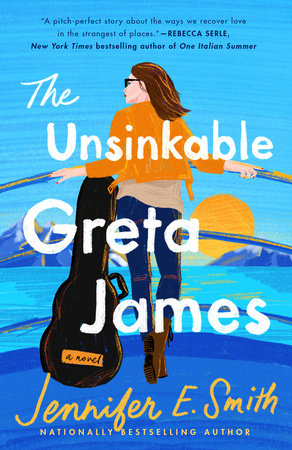 An indie musician reeling from tragedy and a public breakdown reconnects with her father on a weeklong cruise in “a pitch-perfect story about the ways we recover love in the strangest places” (Rebecca Serle, bestselling author of In Five Years)

“The characters are drawn with a generosity that allows them to be wrong but also right, loving but also prone to missteps, and ultimately deserving of a resolution that’s full of hope.”—Linda Holmes, New York Times bestselling author of Flying Solo

ONE OF THE BEST BOOKS OF THE YEAR: She Reads

Right after the sudden death of her mother—her first and most devoted fan—and just before the launch of her high-stakes sophomore album, Greta James falls apart on stage. The footage quickly goes viral and she stops playing, her career suddenly in jeopardy—the kind of jeopardy her father, Conrad, has always predicted; the kind he warned her about when he urged her to make more practical choices with her life.

Months later, Greta—still heartbroken and very much adrift—reluctantly agrees to accompany Conrad on the Alaskan cruise her parents had booked to celebrate their fortieth anniversary. It could be their last chance to heal old wounds in the wake of shared loss. But the trip will also prove to be a voyage of discovery for them both, and for Ben Wilder, a charming historian, onboard to lecture about The Call of the Wild, who is struggling with a major upheaval in his own life. As Greta works to build back her confidence and Ben confronts an uncertain future, they find themselves drawn to and relying on each other.

It’s here in this unlikeliest of places—at sea, far from the packed city venues where she usually plays and surrounded by the stunning scenery of Alaska—Greta will finally confront the choices she’s made, the heartbreak she’s suffered, and the family hurts that run deep. In the end, she’ll have to decide what her path forward might look like—and how to find her voice again.
Read more
Close

Praise for The Unsinkable Greta James

“Beautiful, moving, hopeful: I loved this book from beginning to end, and will be thinking about it for a long time. It’s a total triumph.”—Emily Stone, author of Always, In December

“Warm, funny, and bursting with heart, [it’s] exactly the book you want to read: a pitch-perfect story about the ways we recover love in the strangest of places.”—Rebecca Serle, New York Times bestselling author of In Five Years

“Filled with music, passion, and love of all kinds . . . a fast-paced, emotional novel and an unforgettable exploration of family and the choices we make that shape our lives.”—Jill Santopolo, New York Times bestselling author of Everything After

“I burst into tears at the end of Jennifer E. Smith’s gorgeous, heartfelt The Unsinkable Greta James—tears of surprised happiness. I loved traveling to Alaska with the wild and tender Greta, and found her escape an addictive journey. I will miss her—and her music—now that I’ve turned the final beautiful page.”—Amanda Eyre Ward, New York Times bestselling author of The Lifeguards

“Thoughtful and tender and true . . . perfectly captures the messiness of loving and being loved . . . Smith has written a gripping relationship story that’s also a perceptive exploration of what it means to dream. I devoured it.”—Janelle Brown, New York Times bestselling author of I’ll Be You

“This novel is unabashedly sentimental in the best possible way. It’s about how family can misunderstand us, grief can undo us, and our dreams can save us. It’s a total delight, as transporting and diverting as the Alaskan cruise Greta herself is on in these pages.”—Christine Pride, co-author of We Are Not Like Them

“Smith has crafted a story about mothers and daughters, fathers and children, grief, happiness, and healing—and also about the music industry, hard work, dreams, and relationships both old and new. . . . Readers of Evvie Drake Starts Over will enjoy this book. A well-told story with evocative prose that bares—and bears—the ragged emotions that accompany a journey to healing.”—Kirkus Reviews (starred review)
Read more
Close

Greta is standing at the window of a hotel in West Hollywood when her brother calls for the third time that day. Across the street, there’s a billboard with a sleek white yacht surrounded by turquoise water, an ad for a new kind of beer, and something about it—­that feeling of being adrift—­makes it easier to say no when she finally picks up the phone.

“It’s the last thing I need right now,” Greta says, turning from the window, where the light outside is dreamy and pink. She’s just come from a photo shoot for the cover of her second album, which has been pushed to July. If it were up to Greta, she would’ve moved it back even further, but apparently, that’s no longer an option. Instead, she’d been summoned to Los Angeles to spend three days in a warehouse surrounded by flashing cameras and frowning studio execs in suits and sneakers, the pressure to get this right all over their faces.

It’s been two months since she last performed live—­not since the week after her mother died, when she fell apart onstage—­but everything else has continued to march ahead, the business part of things still grinding forward mostly without her.

On the desk, next to the hotel stationery, there’s a plate of chocolates with a note from the hotel manager that says, We’re so happy you’re with us. Automatically, Greta thinks of her mom, who no longer is, whose absence feels so breathtakingly final that even this is enough to make her heart drop.

“Why don’t you go?” she says to Asher, trying to imagine spending all that time on a boat with her dad. The Alaskan cruise had been her mother’s idea. It was all she talked about for nearly a year, right up until March, when an artery ruptured in her head and the whole world seemed to stop.

Now it’s only a month away. And her dad is still planning to go.

“We can’t let him do this alone,” Asher says, ignoring her question. “It’s too sad.”

“He’ll hardly be alone,” Greta says as she wanders into the bathroom. “He’ll have the Fosters and the Blooms. They’ll take care of him.”

She stares at her reflection in the mirror, her face still made up from the shoot. Red lips, white skin, green eyes lined with charcoal. Her dark hair, usually so wild, is now sleek and tamed. She sets the phone down on the sink and switches to speaker, then twists the tap and begins to scrub it all off.

“He’ll be a fifth wheel,” Asher insists, his voice bouncing around the bathroom. “It’s depressing. One of us has to go with him.”

She straightens again. Her skin is now pinkish, but she looks more like herself, which is always a relief. She grabs a towel and pats at her face. “The thing is,” she says, picking up the phone again and walking back out into the room, where she flops onto the bed, “he actually likes you.”

She knows this, of course. Asher has a wife and three girls under the age of five. He has a job with a boss and a regular work week, an HR department, and a set number of vacation days, which mostly get used up when the kids are sick. He hasn’t been on a plane in years.

Greta’s already been on three this week.

She sighs. “What are the dates again?”

“End of May, beginning of June.”

“I’ve got to be in the city for Gov Ball on the fifth,” she says, almost indecently relieved to have a legitimate excuse, no matter how much she’s dreading it. But this does nothing to deter Asher.

“You know this isn’t just any show. It’s important.”

“It’s not like I’m asking you to choose,” he says. “You’ll be back in New York in time to do your thing. And I’ve heard Alaska is beautiful this time of year. Still a little cold, maybe, but that was just Dad trying to save some money—­”

“Sure you can. You love the water. Remember that time we took the canoe out on—­”

He goes silent for a moment, then says, “It wouldn’t just be for him, you know.”

And that’s what finally gets her.

Jennifer E. Smith is the author of nine books for young adults, including The Statistical Probability of Love at First Sight and Hello, Goodbye and Everything in Between, both of which have been adapted for film. She earned a master’s degree in creative writing from the University of St. Andrews in Scotland, and her work has been translated into thirty-three languages. She currently lives in Los Angeles. More by Jennifer E. Smith