“Strikes all the right notes—captivating characters, lyrical language, and a storyline that captures your imagination and refuses to let go . . . an unforgettable debut!”—Tayari Jones, New York Times bestselling author of An American Marriage

ONE OF THE MOST ANTICIPATED BOOKS OF 2022—The Rumpus, Electric Lit, The Millions, Lit Hub

The Guerreros have lived in Nothar Park, a predominantly Dominican part of New York City, for twenty years. When demolition begins on a neighboring tenement, Eusebia, an elder of the community, takes matters into her own hands by devising an increasingly dangerous series of schemes to stop construction of the luxury condos. Meanwhile, Eusebia’s daughter, Luz, a rising associate at a top Manhattan law firm who strives to live the bougie lifestyle her parents worked hard to give her, becomes distracted by a sweltering romance with the handsome white developer at the company her mother so vehemently opposes.

As Luz’s father, Vladimir, secretly designs their retirement home in the Dominican Republic, mother and daughter collide, ramping up tensions in Nothar Park, racing toward a near-fatal climax.

A beautifully layered portrait of family, friendship, and ambition, Neruda on the Park weaves a rich and vivid tapestry of community as well as the sacrifices we make to protect what we love most, announcing Cleyvis Natera as an electrifying new voice.

An excerpt from Neruda on the Park

White Out, Washed Out

The sound of split wooden frames, shattered glass windows, and fractured brownstone woke her. Luz imagined a huge crash, her body hurling toward a windshield, or some other kind of hurt. Then, as silence followed, she’d burrowed deeper into her covers, relieved. It was only moments before her wind-chime alarm, before Mami handed her a cup of coffee and Papi looked on at her, so very proud. She left their apartment, ready. Today—the biggest day, the day that would set everything in motion.

Luz walked out into Nothar Park, where she watched a wrecking ball swing back and forth from a crane. She picked up part of a brick that had skittered out to the sidewalk, noting how close to her own skin tone it was, a color Eusebia, her mother, called casi puro cafecito. Hardly any milk there, she always said, with an edge of concern, finding it impossible to simply use the word Black. The crane’s neck moved, and the metal rope swung the ball forward, striking again. The noise grew noticeably louder. The wall resisted. But the force of the pressure caused a crater where it hit, and from it, tiny lines extended like wrinkles.

This the sound that woke her.

The cold air was thick with mist. Luz turned away from the noise and rubble, making her way through Nothar Park toward the subway, intent on her destination and determined not to be distracted. Her boss, Raenna, had texted her late last night.

I got news to share, she wrote. Meet me at TSP before work.

As Luz reached the stairs down to the subway, the escalating noise made her pause. The wrecking ball had finally broken through the stubborn wall—the fracturing now complete. Dust rose into the damp air rapidly, then hung softly above the trees.

Was Luz upset to witness the beginning of the destruction of her neighborhood? Nope. Qué va. She was focused on a rare moment of elation. Would today be the day she’d be offered junior partner? Of course it would. Over the last five years, she and her boss had had an agreement. The minute the promotion was a go, she’d be the first to know. She pushed forward.

Although Luz wasn’t upset about the crashing wall, she did worry about her mother. Eusebia often looked onto that old, burnt-out tenement building and spoke about maybe putting together a community campaign to purchase the grounds—for a garden, no less. Luz and her father, Vladimir, remained mute to Mami’s inquiries, hiding conspiring smiles behind cupped palms. They both knew how hard it would be, to pull that off. The obscene asking price for the shell—over ten million dollars. They thought it would remain as it had—abandoned, neglected, unwanted—since they arrived from the Dominican Republic twenty years ago. Who would bother?

Plus. Vladimir had cashed out his retirement investments, and Luz had contributed all her savings from the bonuses she’d gotten over the years, all to build Mami’s dream home back in the Dominican Republic. Mami remained oblivious to their secret scheming. Just last week, Luz and her father pored over the pictures of the terrace overlooking the sea with the hole in the ground that would soon become an infinity pool. In just a few months, the house would be completed, her parents would retire and move back, and Luz would finally be able to live her own life. Move to Central Park West, that corner building on Seventy-ninth Street she’d had her eye on since she graduated law school.

It was ironic, really, that now that she was so close to finally leaving the neighborhood, change had reached it instead. A miracle it had taken this long for the gentrification of New York to reach Nothar Park. The Lower East Side, Chelsea, Hell’s Kitchen, Harlem, Washington Heights, and especially Brooklyn, washed out, white out, everything forever changed. At the firm where she practiced law as a junior associate, she had friends who’d moved into those same neighborhoods, awed at how amazing the space (actual space!) was—friends who just a few years back would have been too scared to walk down the street they now lived on. She knew what would happen when the neighborhood changed. Some of it good, some of it not good. Now here they were, at the cusp. Belowground, the turbulence of the train entering the station prompted her to hurry on. She put the neighborhood out of her mind. Her future life was waiting.

A Body Can Survive Great Pain

The Secret Place, a members-only restaurant in midtown Manhattan, wasn’t listed in any online apps, didn’t accept reservations. As she waited for Raenna to arrive, Luz noticed the dining room space as if for the first time. Every wall painted black, including the tall ceiling. The vases, in contrast, had an ombré gold tint and were filled with oversized tree branches sprouting yellow flowers. They enhanced Luz’s feeling of pure light. She held fast to the edge of the table lest she float away. Luz tried to place the soothing, hip music flowing discreetly out of hidden speakers. Underground Portugal? Brazil?

She had often felt out of place. Just a few nights ago, at dinner with colleagues, they’d been served eel in a reduction of lime that made the flesh writhe. Nodding along with everyone else, she’d said it was delicious, while worrying that others could sense her growing discomfort and nausea. But not today.

Today, Luz ordered the expensive champagne, knowing it was ridiculous to do so at 8 a.m. Raenna would sigh at the impropriety, but find it charming nonetheless.

“Should I bring it now?” asked Henry, their usual server, with honey in his eyes, honey in his smile. Around them, bussers moved with the efficiency of those under constant threat of being fired, removing sweaty water glasses from unoccupied tables and replacing them with fresh ones.

Luz shook her head. “Let’s wait until she gets here.”

She stood and went to the bathroom.

Looking in the mirror, she applied another coat of lipstick. She fixed a strand that had escaped her tight bun, pushed the pinchos further in place—wincing at how tight the hairpins were, how much they hurt. It was worth the pain. She practiced how she would stand in front of her peers when they made the announcement later—each associate would clap, while drilling her with their eyes, especially those who’d been waiting to hear it was their turn.

In the dimness of the bathroom, a familiar sadness neared at the thought of all the hours, all the work, all the sacrifice, her hand first up to volunteer on extra cases—spending every weekend in the office, getting home later and later every day. Not now, she thought, pushing that sadness away. Today, it insisted. In the mirror, on her face, the outline of that emptiness. Where did it come from?

Luz didn’t answer that question, was cautious to not ask it of herself a second time. Emptiness, she knew, was a human-sized shape inside each of us—you could fill it with slimming suits or sky-high heels; one way or another, it gets filled. Older women—Raenna and Mami—never spoke of such. They wanted her focused, relentless. From their lives to hers, the wrong corrected. But the emptiness remained, persisted.

“Diablo,” a loud voice said behind her, outside the frame of the mirror. She had to turn to see.

“Where’s the runway?” Angélica said. “You look like a model.”

Cleyvis Natera was born in the Dominican Republic, migrated to the United States at ten years old, and grew up in New York City. She holds a BA from Skidmore College and an MFA from New York University. Her writing has won awards and fellowships from PEN America, the Bread Loaf Writers’ Conference, the Kenyon Review’s Writers Workshops, and the Virginia Center for the Creative Arts. She lives with her husband and two young children in Montclair, New Jersey. Neruda on the Park is her first novel. 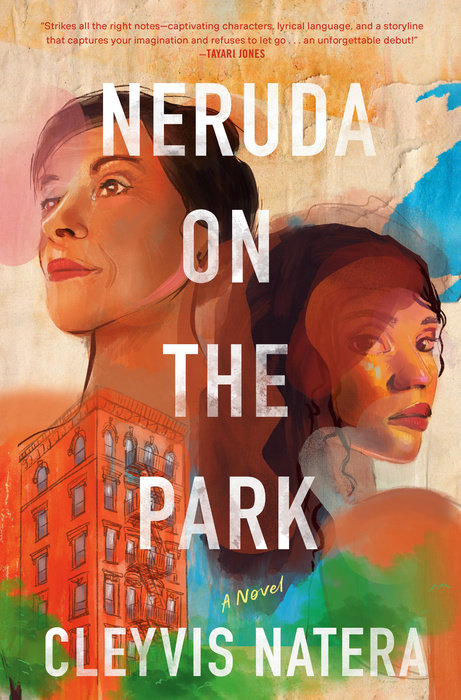