Four artists are drawn into a web of rivalry and desire at an elite art school and on the streets of New York in this “gripping, provocative, and supremely entertaining” (BuzzFeed) debut

“Captures the ache-inducing quality of art and desire . . . a deeply relatable and profoundly enjoyable read, one drenched in prismatic color and light.”—Kristen Arnett, New York Times bestselling author of With Teeth

It’s 2011: America is in a deep recession and Occupy Wall Street is escalating. But at the elite Wrynn College of Art, students paint and sculpt in a rarefied bubble. Louisa Arceneaux is a thoughtful, observant nineteen-year-old when she transfers to Wrynn as a scholarship student, but she soon finds herself adrift in an environment that prizes novelty over beauty. Complicating matters is Louisa’s unexpected attraction to her charismatic roommate, Karina Piontek, the preternaturally gifted but mercurial daughter of wealthy art collectors. Gradually, Louisa and Karina are drawn into an intense sensual and artistic relationship, one that forces them to confront their deepest desires and fears. But Karina also can’t shake her fascination with Preston Utley, a senior and anti-capitalist Internet provocateur, who is publicly feuding with visiting professor and political painter Robert Berger—a once-controversial figurehead seeking to regain relevance.

When Preston concocts an explosive hoax, the fates of all four artists are upended as each is unexpectedly thrust into the cutthroat New York art world. Now all must struggle to find new identities in art, in society, and among each other. In the process, they must find either their most authentic terms of life—of success, failure, and joy—or risk losing themselves altogether.

With a canny, critical eye, Sirens & Muses overturns notions of class, money, art, youth, and a generation’s fight to own their future.

An excerpt from Sirens & Muses

Louisa’s first assignment at Wrynn College of Art was paint home. She’d left home twelve days ago, and now, as she looked out the classroom window, it startled her still to see hills and sullen, huddled townhouses, the New England sky close and cold, nothing like at home, where the sky overwhelmed the land, a drama of clouds and rain and strange shafts of tawny light.

She’d never been on her own before. Her year at South Louisiana Community College didn’t count. She had slept in her old bedroom, borrowed her mother’s car to get to class, worked the same shifts at Chez Jacqueline, eaten Sunday dinner at Grandma and Pepere’s.

Louisa was homesick. It was normal, she told herself. Even at nineteen-almost-twenty, it was normal. And so, alone in her studio, she’d cried a little as she painted Lake Martin at dusk, bald cypresses echoed by their dark reflections in the water. It was a placid scene, but ominous, tinged with danger, curdled at the edges like a faded bruise. In the background, low, swollen clouds gleamed with uncanny clarity and a flutter of pintails took off over the marsh. In the foreground, an ibis waded in the shallows, its bow-shaped beak slicing through the water. Its plumage was a soft, unglossed white, except for its black wingtips. Its pearly blue eye met the viewer’s.

She’d chosen an ibis because Grandma had once told her that it symbolized resilience; it was the last animal to take shelter before a hurricane, and the first to reappear after the storm.

“No, not resilience,” Mom had said, overhearing. “Regeneration. And wisdom.”

“Dinner,” Pepere added. Hunting ibises was illegal, but he’d grown up shooting them for the table and occasionally still brought one home. The meat was orange and fishy.

Now, a thousand miles away from him, Louisa stood alone in an empty classroom. She’d arrived early to secure a spot on the southern wall, and she was pleased with how her painting looked there, bathed in that diffuse northern light, what Mom called painterly light. One window was cracked to let in a breeze, but the room still smelled sharply of oils and turpentine. Afternoon sun gilded the floorboards. As Louisa’s classmates arrived and hung their work, she turned to the wall and ran her fingers over the thumbtack holes. The other sophomores all knew one another already, had spent Foundation Year together, and in their presence, Louisa felt furiously shy.

Maureen walked in, a manila folder under her arm. All professors went by their first names at Wrynn, which did nothing to make Maureen less formidable. Though her wardrobe consisted entirely of overlarge T-shirts and paint-stained cargo pants, the pockets full of jangly objects, she carried herself with the pugnacious confidence Louisa occasionally saw in certain older women who’d stopped caring what the world thought of them.

“Everyone ready?” said Maureen. She opened the folder. “We’ll go alphabetically this time. Louisa Arceneaux, you’re up.” She pronounced it Are-SEE-necks.

“ARE-sin-no,” Louisa corrected her softly. “It’s French.” She shifted so she was standing next to her painting with her back to the wall. She hugged her sketchbook to her chest as her classmates, all fifteen of them, gathered in a semicircle. Only Maureen brought a chair, its legs squeaking against the floor. She set it in front of Louisa’s painting and sat down, crossing her arms.

There was a long silence, her classmates’ faces unreadable. Maureen wore bifocals, and she had a habit of tipping up her chin when appraising a painting, as though she were looking down at it. Finally, Jack Culicchia, who wore a baseball cap embroidered with eat the rich, said: “My problem with your painting isn’t that it’s kitschy, exactly.” He stood near the back, but he towered over everyone, his voice carrying clear across the room. He was known for his digital mashups of assassinated presidents and murdered rappers: The Notorious J.F.K., Tupac Lincoln, Freaky McKinley. “My problem with it is that it screams ‘I’m from the South,’ but it’s, like, Southern Gothic Lite.”

Louisa bristled. She wasn’t just from the South. She was from Acadiana. Expelled by the British from Nova Scotia, her Acadian ancestors had settled in the swamps of southwestern Louisiana before it was even a part of the United States. Pepere, who as a child had been beaten for speaking Cajun French at school, had served as an interpreter for American troops in France during World War II. She wasn’t Southern; she was Cajun.

Louisa flipped to a blank page in her sketchbook. She hunched over and wrote southern gothic light, slowly, in neat cursive.

“What do we think about the formal elements?” said Maureen.

Emma Ochoa, who made brooding canvases about being in a long-distance relationship, said something about the blue in the clouds picking up the color of the bird’s eye and giving the painting nice movement. Demir Erdem, who was Turkish and movie-star handsome, smiled at Louisa and praised her use of red in the cypress bark.

While making the painting—building the frame; stretching and gessoing and sanding the canvas; sketching out the composition, consulting her photos of Lake Martin, refining her lines with each iteration—Louisa had fallen in love with it. She’d seen what this painting might do, how it might make someone feel. She’d hoped to convey how intensely she experienced the landscape of her home, how heavily the air weighs, hinting at deluge and decay, how plants grow with such vigor that a cat’s claw vine can crack a house’s foundation.

“The brushwork is really accomplished,” said Alejandro Díaz, who always wore the same pair of lace-up boots, which Louisa took to mean he was probably also on scholarship.

“Say more about that,” said Maureen.

“Like, the texture of the paint on the surface of the canvas, the impasto. It’s almost liquid, like stormy water. Sort of a form-follows-content kind of thing.”

Karina stood apart from the group, slouched against the wall. She had her long hair gathered up in both hands. She’d been braiding it as she listened to the crit. Now she dropped the braid, letting it unravel. “But I feel like I’ve seen this painting before.”

Louisa wasn’t sure how she’d ended up with Karina as a roommate. The other sophomores had singles, or else they roomed with friends. And Karina was wealthy—her parents were art collectors, and the other day Louisa had sat behind her in lecture and seen her order a pair of two-hundred-dollar sunglasses. Surely she could’ve had her pick of housing. Louisa had decorated her side of the room with family photos and a Festival International 2009 poster from two years ago; Karina had hung only an oval mirror and a small canvas that evoked a squall at sea and seemed, in its perfection, less painted than conjured. Karina hadn’t been mean to Louisa, but she hadn’t been nice, either. Each morning she woke at seven and drew in bed for an hour, sketchbook propped against her knees. Her duvet was creamy white with thin threads of light blue, but she didn’t seem to care about dirtying it. Louisa had admired this ritual and resolved to imitate it, but the other day when she’d pulled out her own sketchbook, Karina had looked over and lifted a single pale eyebrow. Wordlessly, Louisa got dressed and went to the common room, where, instead of drawing, she spent an hour playing Angry Birds on her phone and brooding over whether her roommate liked her. Which was stupid, because she wanted to be a great artist, and great artists didn’t care about people liking them—they were too busy disappearing into their work.

Since that morning, Louisa had continued to wake at the same time as Karina, but instead of drawing in bed, she fixed a mug of instant coffee in Hope Hall’s kitchenette before walking to Williams Park, the bluff that overlooked the town of Stonewater, where she drew the skyline until her first class at nine. She skipped breakfast to save dining room credits—her scholarship covered only the smallest meal plan—and put lots of milk and sugar in her coffee to compensate.

The truth was, Louisa would’ve liked to draw Karina. She wore elegant, billowy clothing, wide-legged trousers and floor-grazing skirts, patterned shawls and complicated wraps. Her face had an austere, graven quality, like an old statue, and she had the most magnificent hair Louisa had ever seen: thick and silky, a sort of icy blond. Once, Louisa dreamed she’d cut it all off with her X-Acto knife while Karina slept. Another night she dreamed about kissing her.

Antonia Angress was born in Los Angeles and raised in San José, Costa Rica. She is a graduate of Brown University and the University of Minnesota MFA program, where she was a Winifred Fiction Fellow and a College of Liberal Arts Fellow. She lives in Minneapolis with her husband, the artist Connor McManus. Sirens & Muses is her first novel. 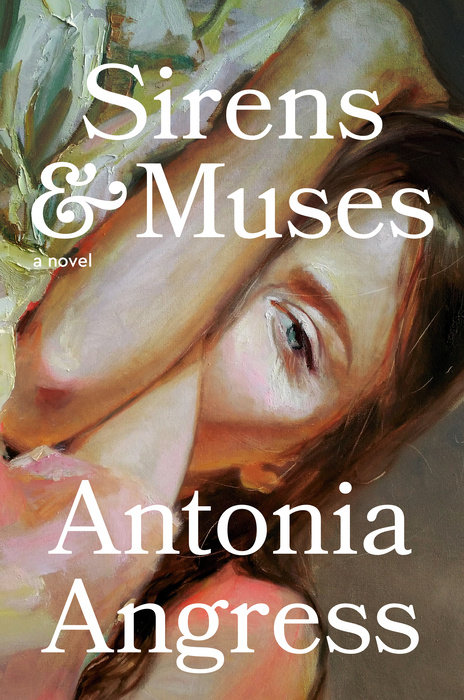