In the propulsive debut novel from the host of the #1 true crime podcast Crime Junkie, a journalist uncovers her hometown’s dark secrets when she becomes obsessed with the unsolved murder of her childhood neighbor—and the disappearance of another girl twenty years later.

You can’t ever know for sure what happens behind closed doors.

Everyone from Wakarusa, Indiana, remembers the infamous case of January Jacobs, who was discovered in a ditch hours after her family awoke to find her gone. Margot Davies was six at the time, the same age as January—and they were next-door neighbors. In the twenty years since, Margot has grown up, moved away, and become a big-city journalist. But she’s always been haunted by the feeling that it could’ve been her. And the worst part is, January’s killer has never been brought to justice.

When Margot returns home to help care for her uncle after he is diagnosed with early-onset dementia, she feels like she’s walked into a time capsule. Wakarusa is exactly how she remembers—genial, stifled, secretive. Then news breaks about five-year-old Natalie Clark from the next town over, who’s gone missing under circumstances eerily similar to January’s. With all the old feelings rushing back, Margot vows to find Natalie and to solve January’s murder once and for all.

But the police, Natalie’s family, the townspeople—they all seem to be hiding something. And the deeper Margot digs into Natalie’s disappearance, the more resistance she encounters, and the colder January’s case feels. Could January’s killer still be out there? Is it the same person who took Natalie? And what will it cost to finally discover what truly happened that night twenty years ago?

Twisty, chilling, and intense, All Good People Here is a searing tale that asks: What are your neighbors capable of when they think no one is watching?

An excerpt from All Good People Here

The residents of Wakarusa, Indiana, could spin gossip faster than a spider spins its web. Each time one of their own did something they shouldn’t—­when Abby Schmuckers got caught shoplifting lipstick from the dime store; when the Becker kid dropped out of the 4-­H volunteer club; when Jonah Schneider fell asleep and snored in church—­the Wakarusa gossip chain would flap their jaws, chewing the tidbit over so thoroughly that by the time they’d finally spat it out again, the Truth was misshapen and unrecognizable, warped into the Story. And because the people of Wakarusa were churchgoing, law-­abiding, capital-­G God-­fearing people, the Story was always adorned with pearls of sweetness to coat its sharp edges: Bless her heart, but . . . I’ll be praying for them, because did you hear . . . ? Lord have mercy on their souls.

Even before everything happened, Krissy Jacobs had understood the power of Wakarusa’s rumor mill, which is why she so stringently avoided its teeth. She went to church every Sunday, she dressed her daughter in pink and her son in blue, she wore the right shoes and made sure her husband had the right ties. It wasn’t because she believed any of it mattered; it was simply because she had so much to lose. This life—­her family, their farm and house—­wasn’t what she’d wanted, wasn’t even close, but it was more than she’d ever had before, and so she held on to it, hands tight.

On the day it all slipped through her fingers, Krissy got up to the sound of her alarm at 5 a.m. like she had every other morning in her life as a farmer’s wife. She slid out of bed quietly so as not to disturb Billy, even though the alarm was for him too. Then she stepped out of the darkened bedroom and made her way down the old wooden staircase to the kitchen.

She spotted the writing on the wall before she even made it down the last step, her breath kicking out of her lungs. Scrawled in blood-­red oversized letters read three horrific messages: f*** your family . . . that bitch is gone . . . this is what you get.

Krissy’s heart pounded hard and painful against her ribs. Her first thought—­bizarre and ill-­fitting—was that the words looked so . . . intrusive here, on her old but pristine white walls, in the falling-apart-­but-­still-­beautiful kitchen. Those nasty, violent words didn’t belong in quaint Wakarusa, Indiana, full of good, pious people. When the town got wind of this, Krissy knew, those words would taint every member of her family for the rest of their lives.

She stood on the bottom step, shaking. Though the sun was not yet up and her mind was foggy, it was clear these words were the advent of something terrible. that bitch is gone, Krissy read again, and this time shame colored her panic. Here something was horribly, horribly wrong, and all she’d been able to think was What will the neighbors say?

Margot pulled up to the curb outside her uncle Luke’s house, turned off the engine, and slumped back against her seat. Through the passenger-­side window, she gazed up at the squat seventies ranch-­style and her body prickled with dread. The last time she’d spent the night here in Wakarusa, in the town where she grew up, was twenty years ago. She’d been eleven.

Margot’s hometown was originally called Salem, but the name was changed in the 1850s to avoid confusion with the other Indiana Salem. The etymology had gotten lost to history, but conventional wisdom was that the Native American Wakarusa could be translated to “knee-­deep in mud.” Both the old name and the new struck Margot as uncanny in their appropriateness. One evoked the killing of innocent girls, the other insinuated just how hard it was to leave. Though to Margot, the mud seemed more like quicksand. The more you fought it, the more it pulled you under. For years she thought she’d escaped, and now here she was, back again.

But more than just the town, what was making Margot’s heart pound now was what version of her uncle she was going to get tonight. The real one. Or the bad one.

She took a deep breath, then grabbed her bags from the back seat and made her way up the path. On her uncle’s front landing was a bulb in a wire cage illuminating the space with a flickering yellow light. The sound of moths beating their bodies against it reminded Margot of childhood summers here—­long, hot days of skinned knees and calves cut up from fields of corn. She lifted a fist and knocked.

After a moment, Margot heard the plunk of a dead bolt, then the door creaked slowly, barely, open. Her pasted-­on smile faltered.

Through the dark crack of the doorway, she studied the changes in her uncle since she’d seen him last. The lines on his face seemed to have deepened in the intervening months and his dark hair was unusually mussed. One thing that hadn’t changed, however, was the red bandanna around his neck, the one she’d given him for Christmas twenty-­five years ago, which he still wore often.

His eyes flicked over her face. “Rebecca?”

Margot swallowed. Despite sharing only superficial similarities with her uncle’s late wife—­short brown hair and an average build—­Margot was used to Luke calling her by the other woman’s name. Still, it stung every time. “I’m Margot, remember? Your niece—­Adam’s daughter?” This was the part that twisted in her stomach. Adam’s daughter didn’t convey that he, Luke, was more of a dad to her than her father had ever been. Niece didn’t capture that, besides his late wife, she was his favorite person and he hers. But it was best to start small, jog his memory, and the rest would usually follow.

“Margot . . .” Her uncle said her name as if he were trying out the syllables for the first time.

“That’s my name, but usually you call me kid.” Margot kept her voice bright and even.

Luke blinked once, twice, and then finally, as if someone had gone in and swiped a hand across old cobwebs, his eyes cleared. “Kid!” He swung the door open and extended his arms wide. “My god, you’re here! What took you so long?”

Margot forced out a laugh as she rushed into his open arms, but her throat felt tight. She’d never get used to the fear that she’d finally lost him for good.

“Sorry ’bout that, kid,” he said when they let go. “I’ve been forgetting things in my old age.” He said it dismissively, as if forgetting your family was as innocuous as misplacing your keys, but there was a shadow of embarrassment darkening his eyes.

“Well, how the hell have you been? Oh, here, lemme help you with those bags.”

Margot made to protest, but Luke was already piling her bags in his arms. At only fifty, his mind may have been failing him, but he seemed strong as ever. As he turned his back, she stole a sweeping glance at his small home and her stomach dropped. It was the first time she’d been here since his wife, Rebecca, died of breast cancer the previous year. She swelled with guilt for not having come sooner. Leaning towers of newspapers were scattered around the living room floor, the coffee table was littered with dirty plates and glasses, and she could see even from where she stood at the front door that there was a layer of dust coating the built-­in bookcase and old TV. The kitchen off to the right was far worse. The sink and surrounding counter overflowed with teetering piles of dishes, bowls stacked onto cups, smears of food hardened over it all. Most unsettling was the collection of pill bottles stacked by the landline phone. There had to have been more than a dozen, some empty, some toppled over. One big one was filled with an assortment of pills, round white ones mixed in with others, which were long and pale green. How much of this was because of his diagnosis and how much of it was because he was a new widower, Margot didn’t know.

“Jesus, you got a lot of stuff, kid,” Luke said, his arms laden with bags. “It’s like you think you’re moving in.”

Margot cut her eyes to him to see if this was a joke—­she was moving in after all—­but there was only the twinkle of teasing in his eye, not that of knowing. She laughed lightly. “You know me.” Then, when he didn’t move, she nodded toward the door at the end of the hall. “I was hoping I could stay in the office?”

A jolt of recognition as he nodded. “Sure, sure.”

Her aunt and uncle’s office had never gotten much use, as they’d both worked in South Bend, Luke as an accountant and Rebecca part-­time at an art museum. In the first fifteen years of their marriage, the room had been a cheery yellow, a crib standing forever empty in the corner. Then, when Rebecca turned forty and gave up hope, she painted the walls gray. They’d bought a desk and a futon, and to Margot’s knowledge the room was only ever used by her uncle, who sometimes liked to play solitaire on the computer before bed.

Ashley Flowers is the founder and chief executive officer of audiochuck, the award-winning, independent media and podcast production company known for its standout content and storytelling across different genres such as true crime, fiction, comedy, among others. She also hosts and produces several audiochuck shows, including the top-rated podcast Crime Junkie. In addition to her work with audiochuck, Flowers has collaborated with Parcast to launch and host several podcasts, including International Infamy, Very Presidential, and Supernatural with Ashley Flowers, which debuted at number one on the podcast charts. Flowers was born and raised in Indiana, where she continues to live with her husband and their beloved dog, Chuck. 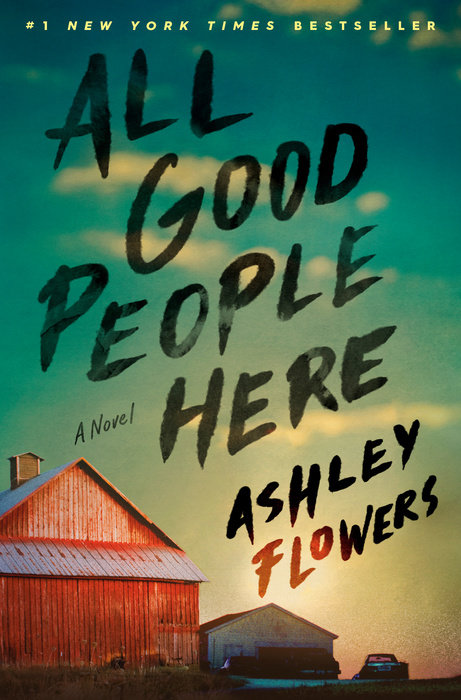