A PHENOMENAL BOOK CLUB PICK • “A sensitive, sharp-eyed, slyly funny novel of venturing back into the foreign country that is your past—and discovering that you can never really shake the places and people that shaped you.”—Celeste Ng, #1 New York Times bestselling author of Our Missing Hearts

A young woman’s past and present collide when she brings her white fiancé home to meet her Chinese immigrant parents in this vibrant debut from an exciting new voice in fiction.

Audrey Zhou left Hickory Grove, the tiny central Illinois town where she grew up, as soon as high school ended, and she never looked back. She moved to New York City and became the person she always wanted to be, complete with a high-paying, high-pressure job and a seemingly faultless fiancé. But if she and Manhattan-bred Ben are to build a life together, in the dream home his parents will surely pay for, Audrey can no longer hide him, or the person she’s become, from those she left behind.

But returning to Hickory Grove is . . . complicated. Audrey’s relationship with her parents has been soured by years of her mother’s astronomical expectations and slights. The friends she’s shirked for bigger dreams have stayed behind and started families. And then there’s Kyle, the easygoing stoner and her unrequited crush from high school that she finds herself drawn to again. Ben might be a perfect fit for New Audrey, but Kyle was always the only one who truly understood her growing up, and being around him again after all these years has Old Audrey bubbling up to the surface.

Over the course of one disastrous week, Audrey’s proximity to her family and to Kyle forces her to confront the past and reexamine her fraught connection to her roots before she undoes everything she's worked toward and everything she's imagined for herself. But is that life really the one she wants?

An excerpt from Central Places

The baby in first class is drooling all over his mother’s sweater. It’s probably rude to watch this happen without saying anything, but the thought of leaning over and telling a total stranger that her kid is ruining her cashmere while we’re hurtling at cruising altitude somewhere above Lake Erie feels like an overreach. Besides, it’s not worth disturbing the quiet hum of the plane, not when this baby—­I think it’s a boy—­has been asleep since we left New York, and there’s still another hour to go before we hit the Midwest.

So instead, I keep staring, likely thanks to that predictable late twenties biological pull, but also out of envy as I try to think of the last time I felt that untroubled, that indifferent to space and time and turbulence. At least the baby is one of those objectively cute ones: fat cheeks weighing down that soft, milky-­pale face, lips scrunched in a rosebud, two ghostly eyebrows suggesting a strain of ancestry that my mother would be able to geo-­locate immediately, in the way Chinese women always can, even when afforded only a glimpse through the rearview of whoever might be waiting behind us in the McDonald’s drive-­through with the same telltale nose bridge. It happened rarely enough in central Illinois that those moments of recognition always resembled a special occasion. From the folds of the baby’s blanket toddles one thick leg, tightly furled like a drumstick wrapped with a little gray sock. Next to me in the window seat, Ben yawns awake from his grown man’s nap. He follows the direction of my stare and nudges me.

I roll my eyes, moving my gaze off the baby and down to Ben’s great-­grandmother’s ring, which I slide up and down my finger again. It’s turning into a bad habit. Ben had it resized over Thanksgiving, but I swear it’s still loose, and I can’t decide if I should tell him or wait until we’re back in the city and take it to a jeweler ­myself. Either would be more useful than endlessly testing the drag of the band against my skin, as if I’m expecting the white gold to shrink down now that it’s making itself at home. Even Zadie no­ticed this new tic the other day, when we were splitting the twenty-­dollar hummus plate at brunch and bitching indulgently about how Williams­burg always got so overrun with German tourists for the holidays. “Stop messing with it,” she chided, and then picked at her bangs so she could avoid looking directly at the diamond, like she still couldn’t believe that the big E happened to me first. Here, inside the fluorescent interior of the 737, the ring wiggles over my knuckle with what feels like a promising amount of effort. But wasn’t there some scientific explanation about how the cabin pressure makes your fingers swell or something?

Ben’s leaning over me now to get a better view of the baby across the aisle. Then, rubbing his jaw thoughtfully, he turns back to me.

Ben pretends to be offended. It’s part of our ever-­running gag, because of course he isn’t making this about that. “No,” he says, smiling impishly. “Quiet.”

This makes me laugh. I say that I hope so, and Ben takes another glance.

“And a little Asian,” he adds, completing the punch line. Because of course, he’s a white guy and I’m the Chinese American girlfriend—­well, fiancée—­so actually, it’s always about that.

I indulge Ben with an eye roll and watch him settle back into his nap with a contented grunt, like a whale surfacing long enough to gather oxygen and consult the scenery before returning to the depths. Of course Ben is unbothered enough to joke about babies and drift back off to sleep while I’m still gaming out all the possible scenarios for what happens when we touch down in Illinois, when the protective spell of our life together in New York disappears and he finally meets my parents. He’s always been like this, not so much unconcerned by the nuisance of cramped seats and roaring jet engines and the future’s greater mysteries as he is drawn to any open flame. Even the apartment Ben had back when we first met, the one right next to the aboveground train, recast adventurously in his eyes: When the J went clattering by, he had the nerve to emit these long, happy sighs about how it proved we were “New Yorkers, baby.” After three years together, it shouldn’t surprise me how different we are in that way: Ben has always been the seasoned ranger, fully at home in the city and its ever-­present potential to turn any day into a personal sitcom episode; a hopeful romantic, buoyed by a belief in a welcoming universe; and the kind of guy who smooths a tense exchange in the Whole Foods line into one of those odd New Yorkian friendships in under twenty minutes. It’s probably what makes him such a good photojournalist. Meanwhile, I’m the one who notices the noise and the disorder, the crooked picture frames and the monstrous train barreling by just a few feet away from where we slept—­the trail greenhorn who catastrophizes for sport. The other night, I ran this self-­assessment by Ted, my boss, when we were working late at the Current office, and he said he agreed. “But it’s what makes you a brilliant sales rep, Audrey,” he added. “You’re ready for anything.” Ted said this nicely, like my ability to anticipate even the most demanding client’s whims without choking on the existential indignities of professionally asking people for money is the most impressive personality trait he can think of.


The only times I’ve ever seen Ben genuinely upset were during occasional incidents like the one earlier this morning, when we were waiting by our gate at LaGuardia. A young white couple asked if we would watch their bags while they hunted down the restroom, which I guess was supposed to be flattering, a coded acknowledgment passing among the four of us as we perched between a family chattering in Farsi and a group of retirees clutching monogrammed luggage. When the couple came back, Ben went off to stretch his legs and locate his daily iced coffee, like it wasn’t late December, like the looming enormity of the coming week now speeding toward us wasn’t enough to jolt him into consciousness by force. Whether out of reflex or the need to fulfill an ancient feminine custom, I struck up a conversation with the woman, who introduced herself as Erin. She seemed pleasant enough as she unleashed a steady clip of opinions about the morning’s traffic, the line at the Terminal B Starbucks, how glad she was to be getting out of the city for the holidays. As she spoke, she kept rustling her unopened magazine, which I realized with a flush of pride was the latest issue of The Current. I wanted to ask her what she thought of the big opioid crisis cover story, or at least watch her flip through the inside fold-­out ad, which I’d spent half of last quarter negotiating for the premium placement and right paper stock. Instead, Erin set the magazine down and began worrying over how the flight would dry out her skin.

“Well, your skin is absolutely stunning,” she said with a sigh. “I’m jealous.”

I could almost hear Erin’s neurons whirring as she looked at me, and I waited for the clues she’d been gathering—­the shape of my face, the crease above the eyes, the unambiguous black hair—­to finish processing. I knew that look well. This was another attempt at classification, not unlike the guessing game my mother used to play in the McDonald’s drive-­through, or the one I received in greeting when I started kindergarten at Hickory Grove Elementary and the ESL aide materialized unbidden to introduce herself at top volume. By this time, Ben had returned, slightly agitated because he hadn’t found coffee that met both his standards for taste and fair-­trade certification.

“If you don’t mind me asking,” Erin finally said as she propped her black ankle boots up on the seat across from the three of us, “where are you from?”

Even though I’d known this was coming, the words bottlenecked at my throat. It had been a while since anyone in the tristate area asked me this, and I tried to think of the last diversity training they made us undergo at work as I searched for language that felt efficient yet polite. Erin seemed perfectly nice, someone whom I’d bump into while waiting for matcha lattes or ask, as we waited in line for the bathroom at a bar, where she got those booties. It was important to not embarrass her for no reason. But Ben spoke up first.

“Audrey is from the Midwest,” he said, leaning over. Ben’s face, usually so handsome with that aquiline geometry, darkened. “She grew up in Illinois.”

Erin made a hmm sound that I wasn’t sure if we were meant to hear.

Delia Cai was born in Madison, Wisconsin, and grew up in central Illinois. She is a graduate of the Missouri School of Journalism and her writing has appeared in BuzzFeed, GQ, The Cut, and Catapult. Her media newsletter, Deez Links, has been highlighted in The New York Times, New York magazine, and Fortune. She is currently a senior correspondent at Vanity Fair and lives in Brooklyn. Central Places is her first novel. 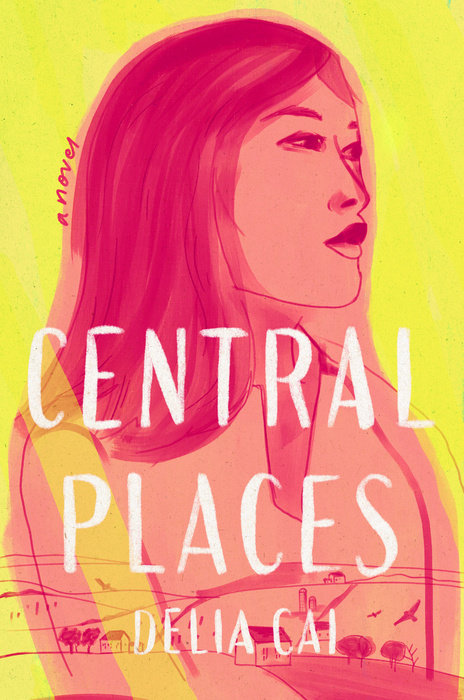