Meet the next big thing in the world of official Minecraft novels: zombies!

Looking after a little sibling can be a real headache . . . especially when they’re a zombie trying to eat your brains!

Life is good for Bobbie in the sleepy village of Plaintown. Sure, her villager parents only ever say “Hrm,” but you pick up the local language quickly. And maybe her little brother, Johnny, is always getting into trouble, but the village’s iron golem is there to look out for him. And, yeah, things are too busy for exploring when you’re the only one in town who ever takes their hands out of their sleeves. But maybe that’s for the best. After all, there are things out there beyond the torchlight that are better handled by adventurers.

But one night, a stranger comes to Plaintown—and he’s followed by a horde of ravenous zombies! Bobbie’s village is overrun, and her world is turned upside down as her friends, family, and neighbors fall victim to the zombies’ endless appetite.

Life is not so good for Ben, an adventurer with nothing left to his name but the armor on his back. When dawn’s light shows him an abandoned village, he sees it as a chance to pick through the wreckage and get himself back on track. What he wasn’t expecting to run into was a desperate girl with a baby zombie villager on a leash.

Bobbie and Johnny are the only ones left . . . and her brother’s a lot greener and a lot bitier than he was last night. There’s still some of Johnny rattling around the little zombie monster’s mind; Bobbie just knows it. And Ben might know a way to bring him back.

As the two journey across the Overworld, dragging Johnny along (literally), they brave dangerous depths, terrifying mobs, and an expanding mystery. Was the zombie attack on Bobbie’s village really just bad luck? Where did the rest of the zombies go? And how exactly do you take care of a little brother who can’t stop trying to eat you?

Hold onto your brains—and your bows—and get ready to enter Minecraft: Zombies!

An excerpt from Minecraft: Zombies!

It was a dark, moonless night when the stranger came to Plaintown.

Bobbie was done with her daily chores, and her baby brother was fast asleep. For the first time all day, the house was still and quiet, and Bobbie found her gaze drifting out her bedroom window.

She saw movement beyond the torchlight.

At first, she thought her eyes were playing tricks on her. It was hard to see anything on a night like this one, when the moon was blocked by dark clouds and the torches set up around town only served to deepen the shadows. She drew closer to the window; she squinted into the darkness.

There—she’d been right. It wasn’t a trick of the flickering torchlight, and it wasn’t Shepherd Ellis’s sheep running loose again. It was a person moving out there. But their movements were strange. They shuffled slowly forward, reaching out with both arms as if for balance.

Bobbie thought it might be a zombie. She’d heard stories about them: mindless, rotting creatures with putrid green flesh and sunken black eyes. They were dead things that stalked the night to prey upon the living.

She was revolted—and curious. She leaned in for a closer look.

As she watched the figure, it seemed to totter and sway, like little baby Johnny had when he’d taken his first steps. Then it stumbled, as if tripping over its own feet, and dropped to the ground right beneath a lit torch.

In the light, Bobbie could see the figure clearly for the first time. It wasn’t a zombie at all. It was a boy. And he needed help!

Bobbie’s parents honked in protest as she ran past them and threw open the front door. She ignored them. She knew very well that it was against the rules for villagers to leave the safety of their homes after the sun went down. But she also knew that she’d be forgiven for breaking the rules if she could help someone in need.

“Hello?” Bobbie said as she approached the fallen figure. “Can you hear me? I’m Barbara—Bobbie.”

The figure raised his head. “Poison,” he said weakly.

The word chilled Bobbie to her core. Poison. Did that mean someone had done this on purpose?

“I need to get you to our cleric,” she said. “Do you think you can make it? It isn’t far.” She took his arm and put it around her shoulder, helping him back to his feet. He took shuffling, uncertain footsteps, but as long as she supported his weight, she knew he wouldn’t fall again.

She wouldn’t let him fall.

Plaintown’s temple was only a few doors down from her family’s home. She didn’t bother knocking. Cleric Avery, surprised by the intrusion, rushed down the stone stairs to question her.

The cleric grumbled, gesturing toward a table. Bobbie helped the stranger climb on top of it. His iron armor clanked against the wood surface. In the bright interior light of the temple, she could see how bad he looked. No wonder she’d thought he was a zombie; he looked half dead.

Cleric Avery examined the boy, honking their conclusions at Bobbie.

“Wither?” she said, doing her best to understand the cleric’s gestures and utterances. “Is there a cure? Do you have a potion . . . ?”

The cleric’s answer surprised her. But she knew better than to ask if they were joking. In Bobbie’s experience, Cleric Avery didn’t tell jokes.

Bobbie ran out into the night, heading to the northernmost edge of town. That’s where the animals were kept: two sheep, twice as many chickens, and a cow named Daisy.

Bobbie had never milked a cow at night before. But this was an emergency, and although Daisy gave her a funny look, the cow didn’t complain.

As soon as Bobbie had returned to the temple, Cleric Avery forced the stranger to drink the milk, straight from the bucket.

“Did it work?” Bobbie asked, impatient. “Will he be all right?”

The cleric grumbled in response. The worst of the danger was over—the milk had cured the wither poisoning—but the stranger was still weak. He needed rest.

“In other words, it’s time for me to leave,” said Bobbie. “I can take a hint, Cleric.” But she hesitated on her way out the door, turning back to smile warmly at the villager. “Thank you for your help. I knew I could count on you.”

Cleric Avery grumbled again, uncomfortable with her gratitude. The cleric, like most of Plaintown’s residents, didn’t enjoy surprises, interruptions, or any sort of deviation from their daily routines. And tonight’s events were certainly unusual. Adventurers came through the village every so often, usually to trade for goods or to use a crafting station. This was the first time an outsider had really, truly needed the villagers’ help, though. And Plaintown had delivered.

Bobbie felt a rush of pride and satisfaction. She basked in the glow of a good deed done well.

She might have felt differently, if she’d only known the trouble that the stranger would bring to her life.

Nick Eliopulos is a professional writer, editor, game designer, and teacher. (He likes to keep busy.) He is the author of two officially licensed Minecraft chapter book series, the Woodsword Chronicles, and the Stonesword Saga, as well as the co-author of the Adventurers Guild trilogy. Nick was born in Florida, lives in Brooklyn, and spends most of his free time in the Nether. 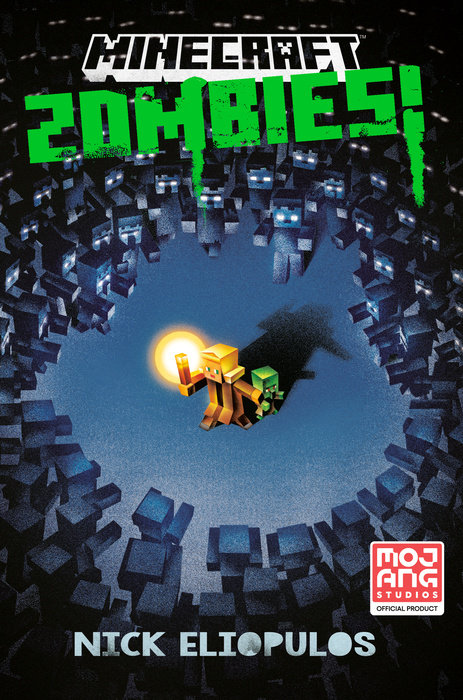