A young Black girl goes missing in the woods outside her white rust belt town. But she's not the first—and she may not be the last. . . .

“I read this thriller that is Get Out meets The Vanishing Half in one night.”—BuzzFeed

“Extraordinary . . . A terrifying tale of fears and hatreds generated by racism and class inequality.”—Associated Press

A PHENOMENAL BOOK CLUB PICK • ONE OF THE BEST BOOKS OF THE YEAR: Esquire, Publishers Weekly

Liz Rocher is coming home . . . reluctantly. As a Black woman, Liz doesn’t exactly have fond memories of Johnstown, Pennsylvania, a predominantly white town. But her best friend is getting married, so she braces herself for a weekend of awkward, passive-aggressive reunions. Liz has grown, though; she can handle whatever awaits her. But on the day of the wedding, somewhere between dancing and dessert, the couple’s daughter, Caroline, disappears—and the only thing left behind is a piece of white fabric covered in blood.

As a frantic search begins, with the police combing the trees for Caroline, Liz is the only one who notices a pattern: A summer night. A missing girl. A party in the woods. She’s seen this before. Keisha Woodson, the only other Black girl in Liz’s high school, walked into the woods with a mysterious man and was later found with her chest cavity ripped open and her heart removed. Liz shudders at the thought that it could have been her, and now, with Caroline missing, it can’t be a coincidence. As Liz starts to dig through the town’s history, she uncovers a horrifying secret about the place she once called home. Children have been going missing in these woods for years. All of them Black. All of them girls.

With the evil in the forest creeping closer, Liz knows what she must do: find Caroline, or be entirely consumed by the darkness.

An excerpt from Jackal

All of that, every single word, is emblazoned on a massive billboard visible about a mile outside of town. Because of the angle of the train’s approach, the Inclined Plane is the first and only landmark I see. It means I’ve reached my final destination. The journey here has been rife with spotty cell service, dotted with tiny towns and abandoned industries consumed by thick forests. Yes. After fourteen years away, I, Liz Rocher, am returning to Johnstown, Pennsylvania. The rust belt.

I take another gulp of my train wine. The cheap varietal burns my palate. Varietal. Palate. Who do you think you are? There it is. Judgment. One of the many things I ran from when I left.

The train slows. I catch a glimpse of my reflection in the window. With my thick natural hair and dark skin, my Appalachian origins are unexpected. I buzzed all my hair off a little over three months ago. It’s finally settled into its new length. Returning home with no hair means no protection. That’s why this trek required a trip to Harlem to get a decent wig. Her name is Valerie. On the box, she looked like a pop star. On me, she looks like a PTA mom. Between the wig and my rumpled business casual, I look like a mockery of what I’ve become: a “city girl.” You’ll never be rid of that backwoods, small-town stink. There it is again. My therapist, a tall white woman who gives me names for my feelings, would call that voice my anxiety. The tightness in my chest is my imposter syndrome. The occasional inability to catch my breath is a perfectionist tendency. Neat little notes in her records. My next sip of wine becomes a full gulp, finishing off the split.

“This stop is Johnstown, Pennsylvania.”

I gather my things. My phone lights up with a notification from the office. Sales never sleeps. I’ve taken the weekend off, but I have work to do. I always have work to do. If I don’t, I ask for more. The first time I did, my then-boss laughed and asked, “Trouble at home?” Implying that I didn’t have ambition, I had misplaced avoidance. I smiled back at him with all my teeth. In two years, I had his job and an engagement ring on my finger. I don’t have the ring anymore, but the work is a constant. Sometimes I wonder how he knew. I try to open the document but it refuses to load. A single bar of service flickers in and out. Great. I cling to my technology, like the rind of this place won’t get on me if I’m shiny enough.

Moving into the aisle, I have to peel my dress pants off the backs of my thighs. I chose slacks over sweats because I feel powerful in a suit. In control. Every sweaty wrinkle threatens to break that illusion.

The train comes to a stop. What should have been an eight-hour journey became ten because of delays, and my body is sore and stiff. I turn my head to stretch my neck. A ligament pulls tight all the way down the center of my back, pinching right behind my heart. My eyes land on a red sign at the top of the open train door.

My suitcase is above my head. One good pull and I can roll off this train. Or I could stay? Ride on to Pittsburgh. Take a flight back to New York.

How does she always know exactly when to call? I answer it.

I glance across the car, half expecting her to pop out from one of the empty seats. “How do you— I’ve been delayed for—Are you tracking my trip?”

“Someone won’t stop asking when you’re going to get here.” Mel is more than enough reason to come home. Her daughter, my goddaughter, Caroline, is another.

I lift my bag into the aisle, but I don’t leave the train just yet. A few passengers slide by me.

I look back at my seat. Seats. Plural. I paid for both of them back in January when Mel called me and said, “I’m getting married.” No hello. No how are you. No delighted scream. No girlish cheering. Mel started the call with a statement. She ended it with a date. That’s how I knew she was serious. I bought tickets. The details would come later. She’d made a New Year’s resolution to live in the “present.” After more than ten years of living with her boyfriend, Garrett Washington, Melissa Parker was going to take his last name. Then, I had been all too eager to attend because I was finally who I imagined myself to be: Successful. Great job. Great fiancé. I’d become a New Yorker who had plans to move to Connecticut in three years.

“How does it feel to be home?” Mel asks.

“My home is dead.” The phone is warm on my ear by the time this unprompted observation spills out of me.

“Liz,” she replies. “Stop being so damn dramatic. It’s one weekend.”

Let it be known, I buried this place. When I look at a map of the United States, my eyes drift over all 309 miles of a state that isn’t quite the heartland or the coast. As I stand in this Appalachian intercostal of America, I find myself in a liminal expanse. A cruel riddle.

“Can I get a weekend for my wedding?”

I see the conductor waving at me. This is it. Last chance, Liz.

I knew Melissa Parker was a good person when she shielded me from spitballs in the cafeteria in middle school. I’d stumbled into some quintessential ’90s bullying. My sin? Being the only Black kid who wasn’t “Black.” One of three in my entire school, I was the one who didn’t fit in. I didn’t sound like them or listen to rap or have any rhythm. To my white classmates, these were compulsory to the definition, leaving me at the mercy of this shameful smattering of stereotypes. Cue the spitballs. The other Black kids were no help. I don’t blame them; they were swimming for their own social lives and I was tainted water. Branded an Oreo, through and through. Whiteness influenced my speech, mannerisms, and pop-culture preferences. Mel and I hadn’t said more than a few words to each other before then, but when she saw my matching lunch of a soft pretzel and fries, she knew we were meant to be. That’s what she says. We both know it was because she herself was a white girl who didn’t fit in. She wasn’t rich, her blond wasn’t from a box, and she wasn’t interested in power over kindness.

“You get exactly forty-eight hours,” I say before yelling to the conductor, “Wait!” A quick hoist of my bag, a sprint down the aisle, and I’m off the train. It lets out directly onto the tracks. “My god, this place is remote,” I say to Mel.

The train pulls away. The landscape mounts. The flat coast is a distant memory now. Eastern hemlock trees crowd in, bringing darkness with their density despite the dwindling daylight. I’m in the wild. Breathe. I name the things around me:

“Garrett just sent me a picture of the view at the venue. It’s stunning,” Mel says. I can hear the tinny sound of her mixing something in her kitchen. Baking. Probably her cake. Mel got the idea to get married in January. She only seriously started planning two months ago. This ceremony is the definition of haphazard, last-minute, and thrown together with a hope and a prayer.

“Glad you finally decided on a place the day before the ceremony,” I tease. “Where is it?”

“We’re using Nick’s place?” The upward inflection is there to make sure I’m okay. I’m not the biggest fan of her brother, Nick.

Saliva pushes past the wine on my tongue. I don’t reply. I’m not gonna say it until she does.

“It’s . . . the woods. We’re in the woods, okay?” This double insistence tells me all I need to know. “Elizabeth Rocher. Please tell me you’re gonna be cool.”

“Wh—what do you mean?” I almost fool myself with the validity of that question.

“I don’t know—we were going to grab the ballroom at the Holiday Inn, but they’re closed for the weekend because a pipe burst. We were gonna do it in the yard, but Nick offered. It’s beautiful, Liz. Just beautiful—”

“Please don’t tell me you’re gonna run?” Her voice gets tight with emotion.

I choke back my laugh. Too late.

“I didn’t mean that,” Mel backtracks.

“Yes, you did.” Mel is the only reason I survived Johnstown. I know what this wedding means to her. “You are so lucky—” I start.

“So lucky,” I repeat as I walk toward the station.

Erin E. Adams, author of Jackal, is a first-generation Haitian American writer and theatre artist. She received her BA with honors in literary arts from Brown University, her MFA in acting from The Old Globe and University of San Diego Shiley Graduate Theatre Program and her MFA in dramatic writing from NYU Tisch School of the Arts. An award-winning playwright and actor, Adams has called New York City home for the last decade. 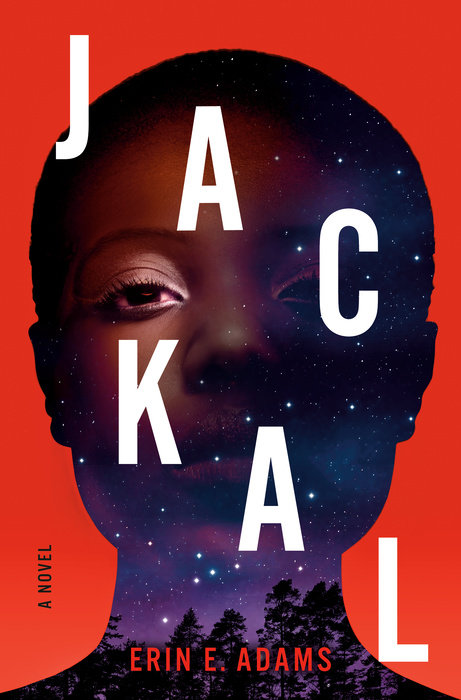